Why Seville Tapas is my new Devouring passion 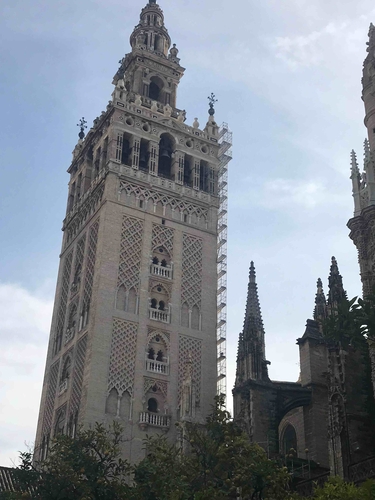 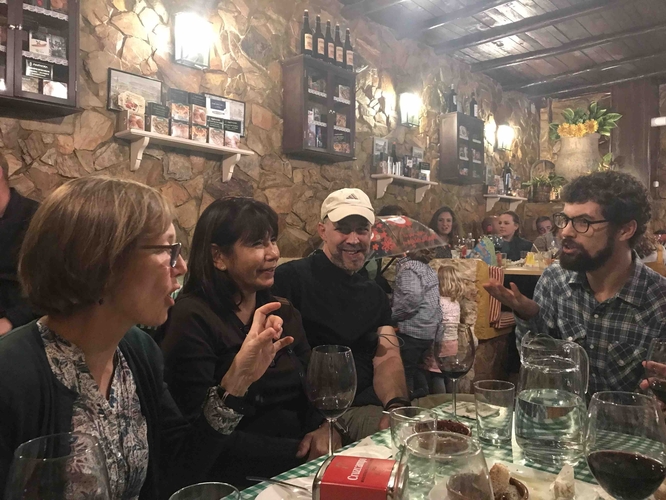 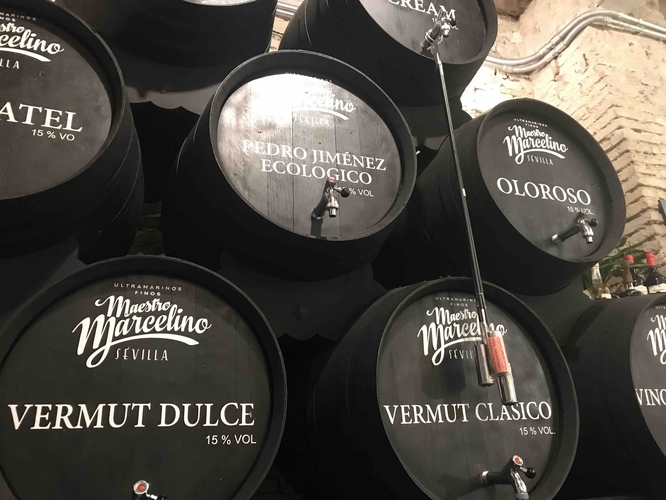 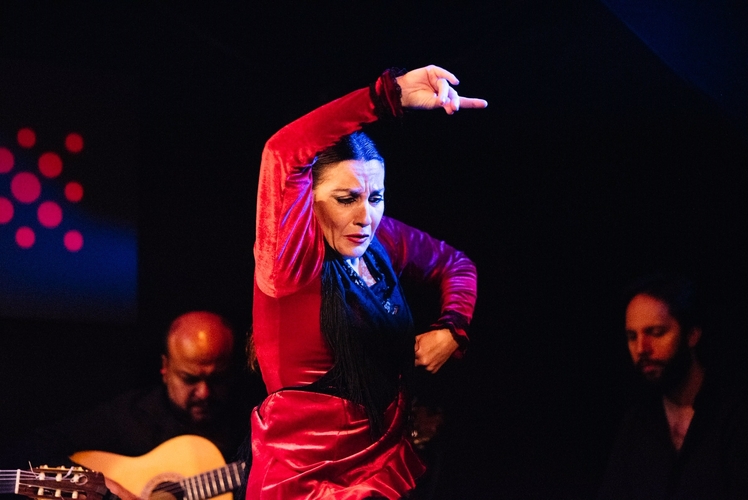 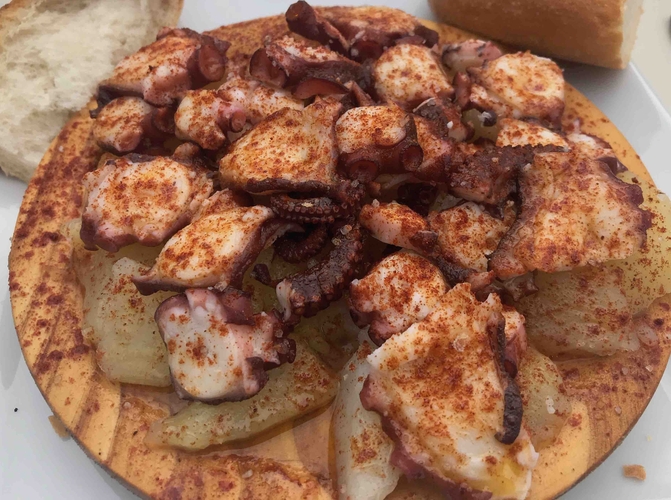 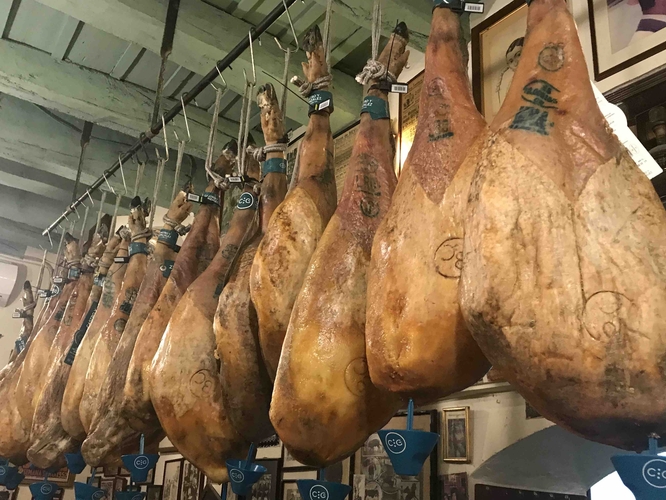 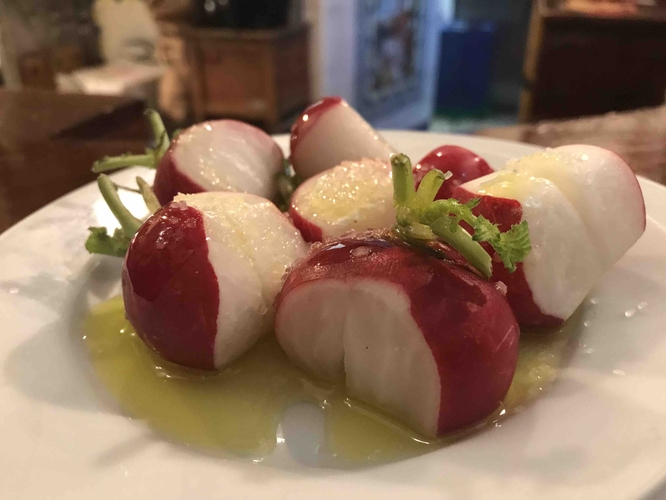 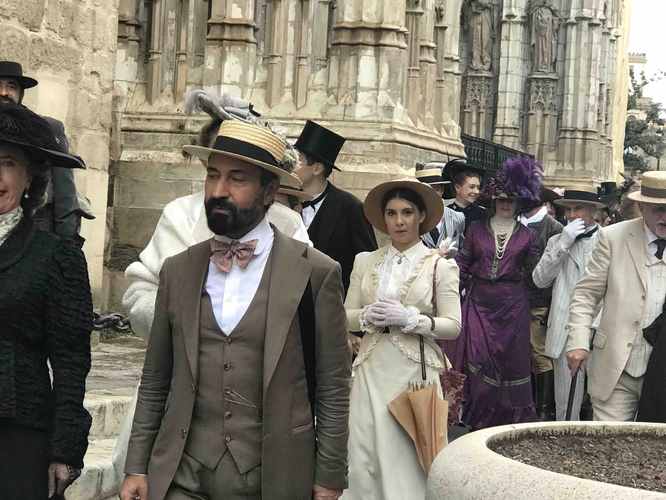 Neil Sowerby eats his way around Spain’s most romantic city

RODRIGO de Triana is one of history’s great losers – reputedly cheated out of the royal reward for being the first man to sight America. From the crow’s nest of Christopher Columbus's ship La Pinta he had shouted "La terra!  La terra!" but was ‘gazumped’ by Columbus himself, who claimed he had previously seen ‘light’ in the same direction, which must have been land. So Chris got the acclaim and the lucrative lump sum; Rodrigo got a belated statue and a street name in his home town of Triana.

Like its humble sailor son, Triana has always played second fiddle… to big brother Seville across the Guadalquivir River. From the quayside of this traditionally gypsy barrio, you gaze across at the distant floodlit golden Giralda Tower, crowning glory of Seville’s historic centre.

That centre had been thronged with sightseers from across the globe. Crossing the Ponte de Isabel II, we encountered different crowds, locals mainly enjoying their Saturday evening, a major chunk of which involved tapas.

We were there in the same pursuit as part of a guided foodie stroll run by Devour,  which runs tours across six Spanish cities – Madrid, Barcelona,  Malaga, Granada, San Sebastian and Seville, all with English speaking guides. In Seville there are five different tours to choose from; the following night our second tour bookended an authentic Flamenco show with further tapas bars.

But first Triana and the Tapas Like A Local Tour. Our meandering between four bars will take in Rodrigo’s street but starts just back from the riverside next to the neighbourhood’s oldest church, the Iglesia de Santa Ana.

It was built by Alfonso X (1221-84) in 1276, shortly after the Christian reconquest of the city. He dedicated it to the Virgin Mary’s mother, St Anne, for answering his prayers and  curing him of an eye disease. According to local legend, children baptised in the font here were bestowed with the gifts of flamenco singing and dancing.

This ‘Cante Jondo’ heritage comes to the fore during the Velá de Santa Ana, July 21-26 in 2019, a festival combining Flamenco and food plus the tradition of “la Cucaña”. This competition requires participants to walk along a boat’s bow covered with grease in order to catch the little flag placed on the end. Fail and you plunge into the river.

But it is the Easter Holy Week that truly confirms Triana’s separate identity. The Virgin carried in procession from here is instantly distinct from its Seville ‘rivals’, our Devour guide Pablo informs us as he pours welcoming glasses of local vermut (vermouth – wine with botanicals) in the Bar Santa Ana. 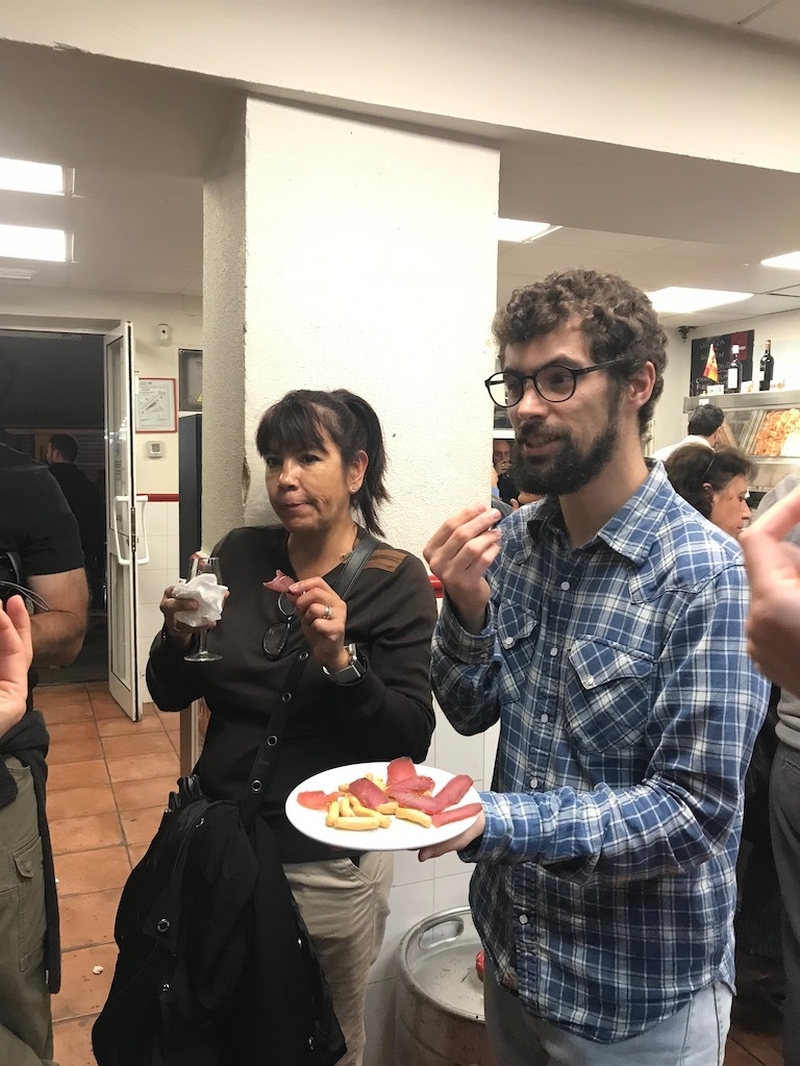 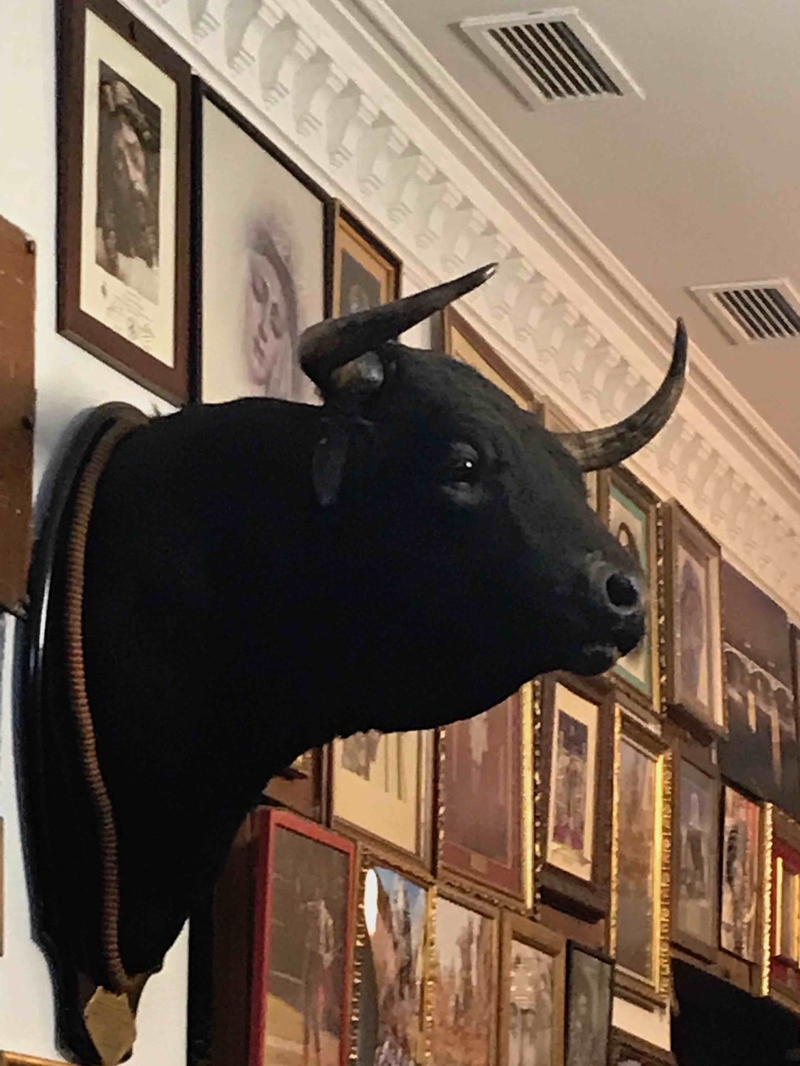 This street corner bar is old school, not just celebrating the Virgin but also the bullfighting tradition that defines the city. Just across the Gualdalquivir you can visit the Plaza de Toros de la Maestranza which was the inspiration for Bizet’s Carmen (don’t miss its museum); with its 18th century Baroque facade, it is Spain’s mightiest bullring. Or just hang out in the upmarket tapas clustering alongside such as the Bodeguita Antonio Romero.

The Santa Ana is quite different and the food we taste is correspondingly homely – chunks of aged Spanish cheese and cured chorizo. The second stop on our two and a half hour long tour is even less grand, even though it is called La Grande. We squash into this rough and ready temple to seafood, standing up like the locals.

Here Pablo – originally from Galicia, so no stranger to fish and shellfish – orders us fresh shrimp from Huelva and ‘Mojama’ (hung out to dry in the sun) salt-cured tuna. With it we sip Manzanilla, Sanlucar de Barameida’s answer to Fino sherry. Bone-dry and saline, it is a challenging introduction for some of the party, so we help them out.

You’re not going to enjoy every new discovery on such a tour but booze-fuelled conviviality conquers inhibitions. At the smarter Las Golondrinas it’s a pick between local draught beer or a Tinto de Verano (cold red wine and soda) to wash down our pork sirloin and mushrooms with parsley alioli and palate-cleansing dressed radishes; with a lavish selection of tapas at La Antigua Abaceria it’s barrel-aged Amontillado sherry or red wine, followed by a nightcap of Pedro Ximenez, sweetest of sherries.

Actually, it’s only our first nightcap. After bidding farewell to our jolly group and picking Pablo’s brains my wife and I head off for one of the oddest bars we’ve ever been to. As midnight looms it takes ages to find El Garlochi in the maze of streets north of Seville’s touristy Santa Cruz quarter.

Inside it’s tiny but seems determined to outdo the Cathedral in camp religious iconography and incense-burning. Actress Uma Thurman once notoriously dressed up as the Virgin de la Dolorosa for a visit here; we suspect this was down to the signature cocktail Sangre de Christos (‘Blood of Christ’), a blend of grenadine, pink champagne and whisky. We stick to equally pricey but huge G&Ts and stumble back to our hotel, captivated by the entire evening.

To kick off the next day’s Seville Tapas & Flamenco Tour there’s more sweet red vermut as an aperitif and a new guide, long-exiled Parisienne Sophie. It’s longer (four and a half hours) and more expensive than Triana but features a remarkably good, authentic Flamenco performance.

From here it’s a seven minute walk to the vintage Las Teresas bar, a showcase for jamón ibérico de bellota, the cured hams hanging from the ceiling all along the busy bar. The sheep’s cheese we drink with Manzanilla shows its age, in a similarly exciting culinary way.

We are in the cobbled heart of Santa Cruz, the picturesque former Jewish quarter in the shadow of the Giralda. The Casa del Flamenco is a few steps away. The courtyard of a 17th century mansion, the auditorium is dramatic in its own right; the show a sensational marriage of song, dance and a sinewy guitarist who smiles through the most intense of musical challenges. You understand why the troupe has won international acclaim. Our final dining destination of the evening is worthy of its own acclaim. We have actually stumbled upon the Vineria San Telmo wine bar ourselves earlier in the day, seeking lunch after some frustrating sight-seeing in an unseasonally torrential Seville. Small plates that particularly impressed were Burgos black pudding filled crepes with a roasted red pepper sauce (pictured below) and a king prawn carpaccio with soy and sesame. So new wave tapas, designed to partner an adventurous (though still mainly Spanish) wine list.

Whatever the Spanish is for Groundhog Day we were happy to be dragged back there for our tour finale, seated at a long table, sampling local wines with grilled morsels. Toasts aplenty to the Andalusian city’s gastronomic goodies. 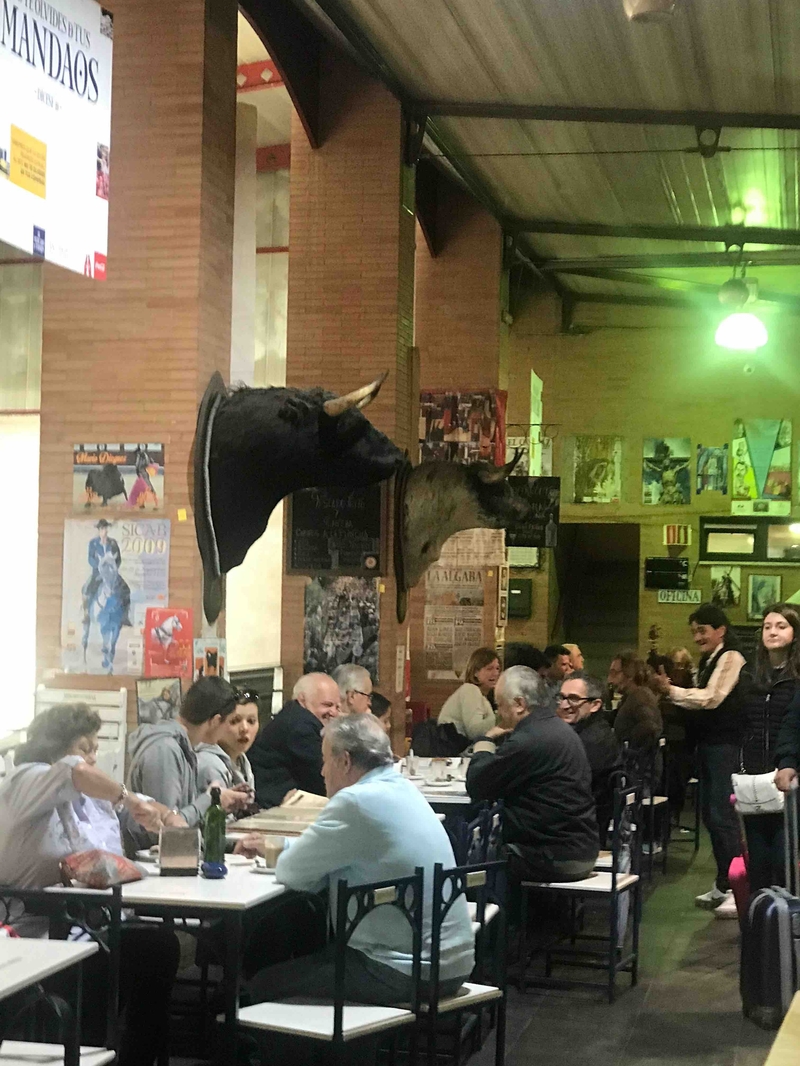 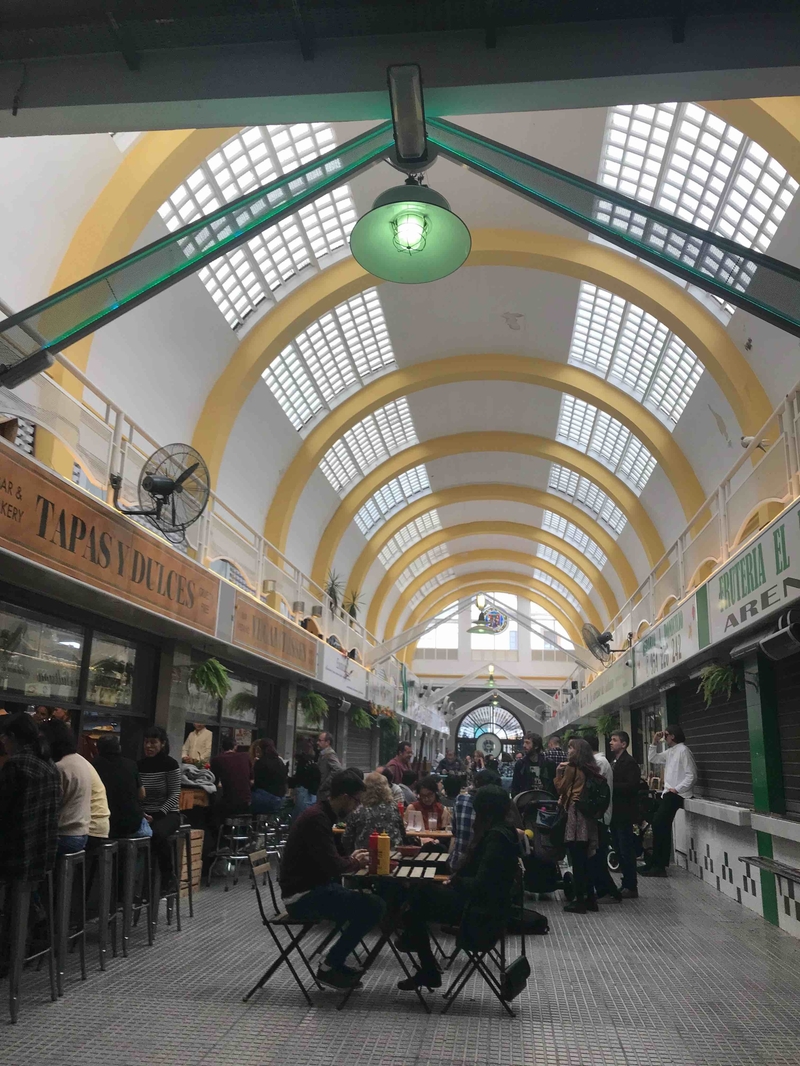 Beyond the tours, going off piste, as they say, we made lots of individual discoveries across three days in a city rich in markets. The beautiful Arenal Market near the bull ring is the quietest (check out the food at Septimo wine bar across the Calle Pastor y Landera);  the Triana understandably the grittiest but with some fine, affordable eating spots. Look out for pescado frito (fried fish) served in little cones, espinacas con garbanzos (spinach and chickpeas) and in late spring caracoles (snails). 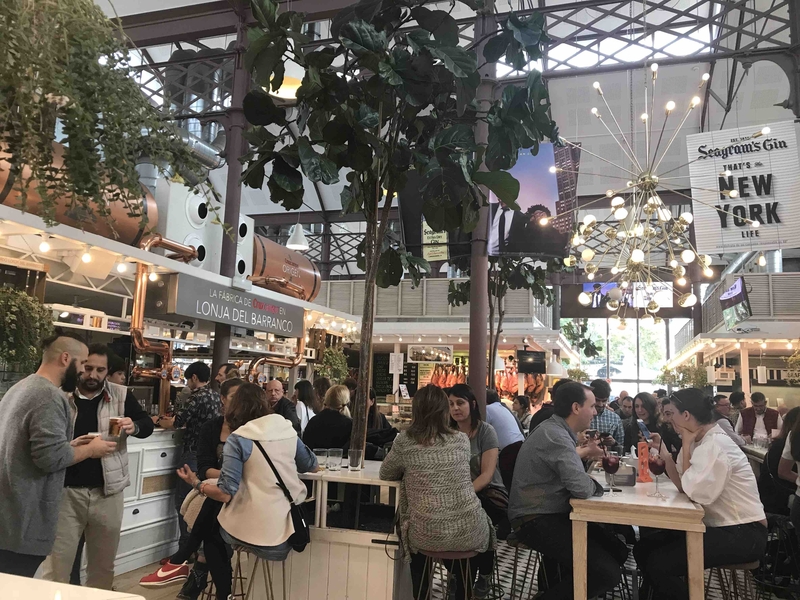 The buzziest market by a way is the gourmet-led Mercado Lonja del Barranco, a sort of smarter Seville version of our own Mackie Mayor with a roster of quality traders. A stall solely devoted to polpo (octopus) several ways. What could be more perfect? And you can sit and eat it with a glass of Manzanilla (a theme developing here) outside by the river. 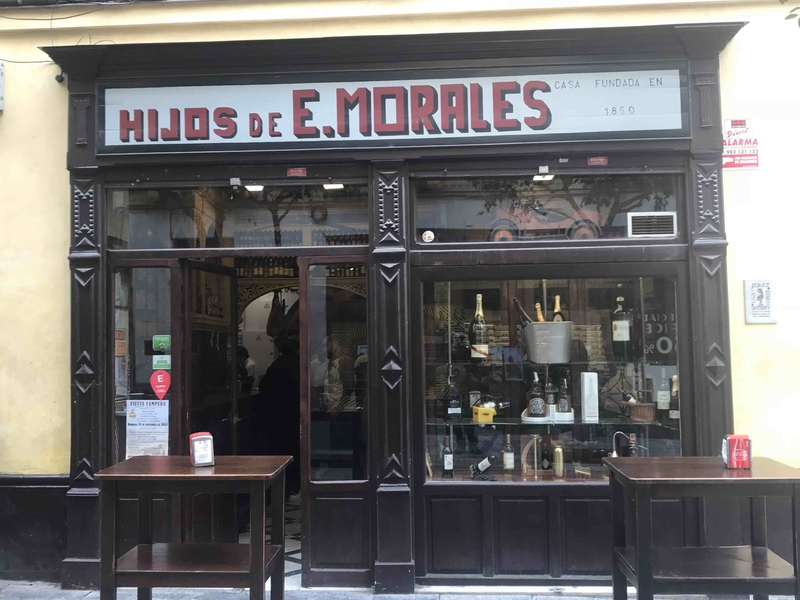 Ultra-traditional bars to recommend? A stand-out on the Santa Cruz main drag of the Calle Mateos Gagos is the Taberna Alvaro Peregil (La Goleta). Opened in and unchanged since 1904, it defines the hole in the wall hang-out. We passed on its trademark sweet fortified vino de naranja (orange wine) but introduced ourselves to pringás (well stewed pork buns).

Alternatively drop in on the even more venerable Casa Morales, founded in 1850, so the city’s second oldest bar. Walk through to the back room of this family-run establishment where old concrete vats remain from when it was a town winery. In 2018 we settled for glasses of Rueda white with plates of bonito and polpo gallego.

Just up the Calle Garcia de Vinuesa at No.20 you’ll find Uieno, a fine indie showcase for local produce to take home, perfect for pushing your luggage allowance past its limit.

We were so busy eating we didn’t roam far beyond the key tourist sites, all conveniently located within a couple of minutes’ walk of our hotel, the Legado Alcázar.

With the Royal Alcazar Palace attracting more than one a half million visitors a year it’s best to book in advance to avoid prohibitive queues it’s best to book in advance or online. The same applies to the adjacent Cathedral and its Giralda bell tower, bets preserved remnant of its previous incarnation as a mosque. The most captivating edifice in the Alcezar is the Mudejar tiled Palace of Pedro I. You might recognise it as a backdrop for the kingdoms of Meereen and Dorne in Game of Thrones. To understand the intricacies of the entire complex we’d recommend a guided tour, followed by a contemplative stroll around the acres of lush gardens. 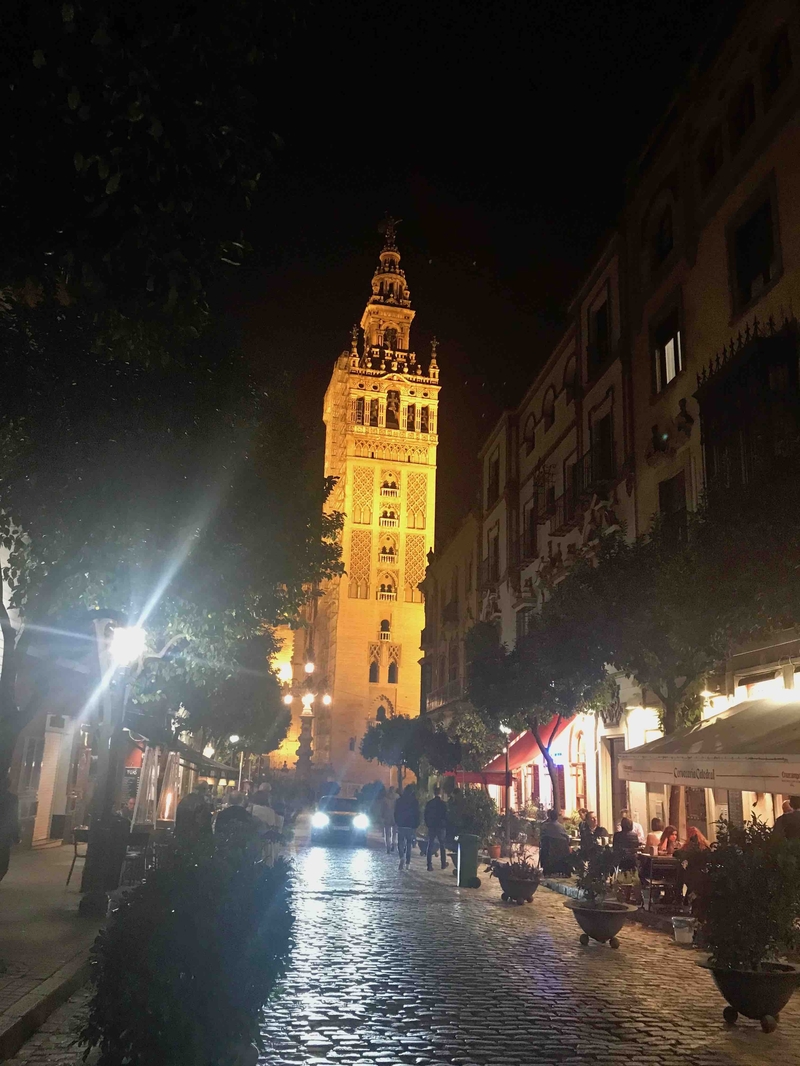 In complete contrast is the Cathedral, the world’s largest Gothic church, its lavish, multi-chapelled interior quite overwhelming. It was relief to ascend the 100m minaret come bell tower and take in across the Gothic buttresses views of this most romantic of cities. Descending, we paid our respects to Christopher Columbus, whose bones may or may not lie in his elaborate, allegorical tomb (pictured below). So whatever happened to Rodrigo de Triana? After his return to Spain, legend has it this forgotten man sailed to Africa and became a Muslim. The rest is History.

Each tour provides a responsible, sustainable and authentic ‘off the beaten track’ experience that gives a unique insight into the city’s culture, cuisine and community. Great food is just the beginning; tours are super-local, super-informative and bring Spain’s fabulous gastronomy, history and traditions to life with a unique blend of storytelling and food and wine tasting.

From seasoned food lovers to first-timer food tourers and families, there is a memorable tour to feed everyone’s curiosity. In Seville there are five different tours to choose from, with the Tapas Like a Local: Triana Neighborhood Tapas Tour costing 69€ per person and the Seville Tapas & Flamenco Tour costing 109€. For further information on the full range of tours available and to book a place visit www.devourtours.com.

Neil flew to Seville from Manchester with Ryanair and stayed at the Legado Alcázar hotel, Calle Mariana de Pineda, 18, Seville, Sevilla, 41004 It’s a quiet, family-run boutique hotel in a recently converted mansion, backing on to the Alcázar Gardens and convenient for the major tourist sights. Recommended.