What happened when we only ate aphrodisiacs for a whole day? 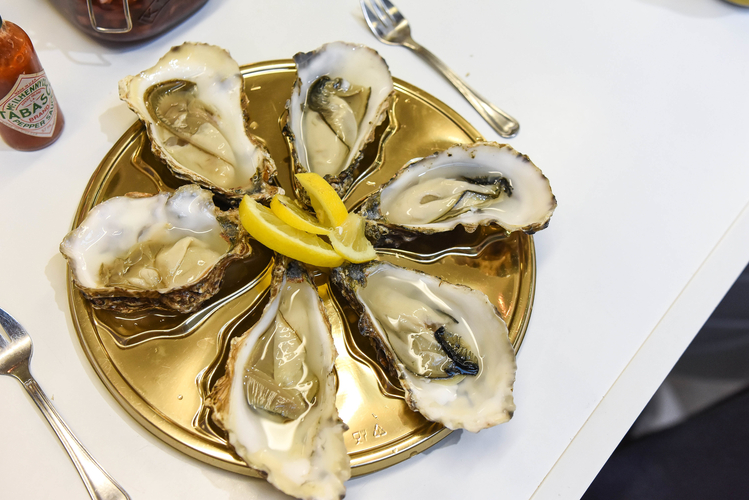 Between restaurant reviews, trying out new openings (restaurant openings - don’t worry, there’ll be plenty of innuendos to come...see, there’s one), and researching various food-related features in my job as Leeds Confidential’s Calorie-Consumer-in-Chief, my weekly diet usually involves gorging myself like a bear preparing for hibernation, followed by roughly the same level of physical exertion. The idea that food can be a fuel to invigorate any part of my body is an alien concept.

Then I read this, about Casanova. Yeah, that Casanova. The one who would neck fifty oysters each morning before traversing the globe, writing about Yorkshire Puddings, and getting with over a hundred women (Erm, same, you just don’t know them because they go to a different college. They’re really fit though, and they definitely exist).

With Northern Ballet’s Casanova premiering in Leeds this weekend, it seemed like the perfect time to explore the correlation between his two main pursuits, food and sex.

Based on some very in-depth research - a grandiose term for reading Cosmo sex tips and analysing menus on ITV’s Dinner Date - I compiled a list of foods that science itself had promised would put the wowsers in my trousers.

Because I had so much faith in these aphrodisiacs and their effect on my virility, I would need a chaperone to prevent me whipping my trousers off mid-lunch or rubbing myself on anything vaguely female-shaped like a sexually aggressive cartoon skunk. This chaperone would also need the iron will to, no matter the circumstances, coldly rebuff all of my romantic advances. The perfect job for my fiancee, Lucy.

Legend has it that Casanova would shuck and eat fifty oysters for breakfast every morning. Having at one point in my life been a smoker, I can imagine what it feels like to have all of that sliding down your throat first thing in the morning, and it ain’t sexy.

We opted for a lighter option of Coffee, which in moderate doses has been proven to increase sexual arousal in female rats, and a banana - high in potassium, known to trigger the production of testosterone in males, and hilariously dick-shaped.

Lucy had a pain au chocolat. “Good thinking! Dark chocolate releases endorphins which helps people ‘get in the mood’” I tell her, in my best poindexter voice. I think she just fancied pain au chocolat.

What we ate: More Coffee, Avocado on Toast, Eggs Florentine

By midday I wasn’t noticing any noticeable change in my sex drive, which, considering we had spent the morning in Leeds Confidential HQ, was a) not surprising and b) not a problem. They say power is a big turn-on, so I can only imagine that by giving Lucy insight into my high octane, day-to-day work role would spark something inside her - even without the pain au chocolat helping things along. Luckily she hid it very well. I knew I picked her for a reason. 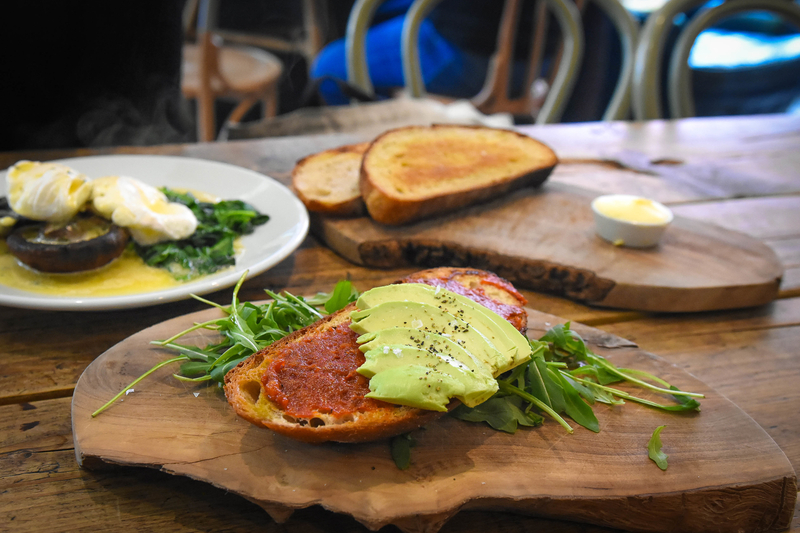 We nip out to Friends of Ham for more sustenance. Avocado - high in Vitamin B6 which helps create libido-boosting prolactin - on toast with a dressed rocket salad. Rocket’s claim to being an aphrodisiac is that dark leafy greens have been proven to block environmental contaminates that can negatively effect libido. Sounds pretty tenuous, but they must call it “rocket” for some reason.

Lucy went for Eggs Florentine: poached eggs - no scientific backing for this one, but they’re an ancient symbol of fertility - and spinach, which I guess did the trick for Popeye? I feel like she wasn’t really trying at this point. Maybe she was scared it would be too effective…

What we ate: Chilis, Oysters

3pm rolls round, and the only noticeable change in my delicately-adjusted inner universe is a palpitating heartbeat from drinking three times the volume of coffee I usually would have. This wasn’t working, time to pull out the big guns.

By increasing heart-rate and making you sweat, chillies mimic a state of arousal in a way that tricks your body into thinking it’s turned on. Either that, or they’d trick my body into thinking I was walking up a short flight of stairs. I explained our experiment to Frank, owner of Merrion Centre’s Chilli Shop. By complete coincidence, it turns out he used to run the UK’s first (and last) Aphrodisiac Food Festival, in Brighton. 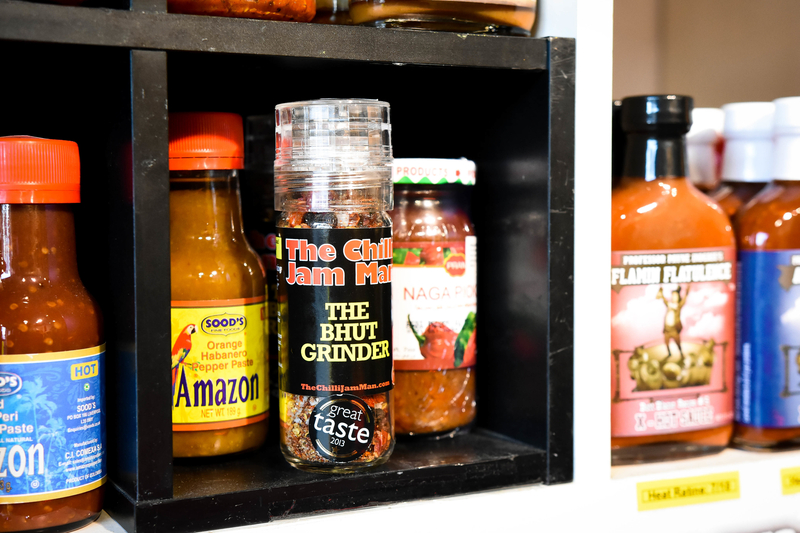 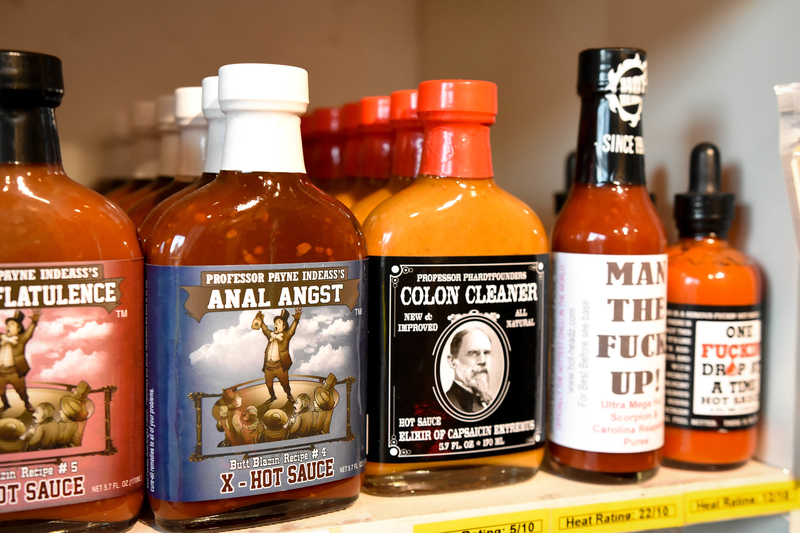 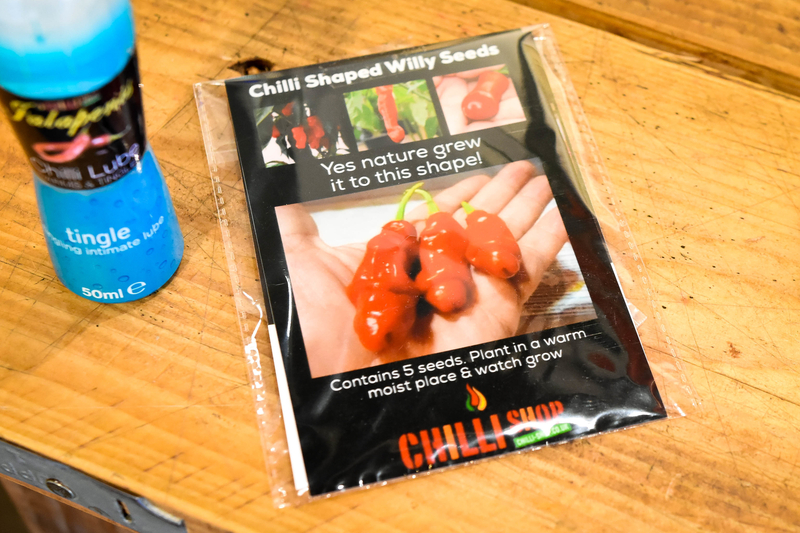 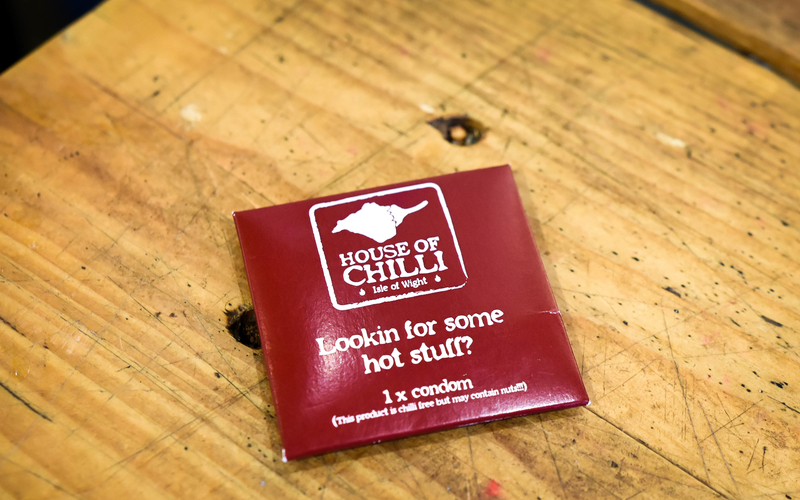 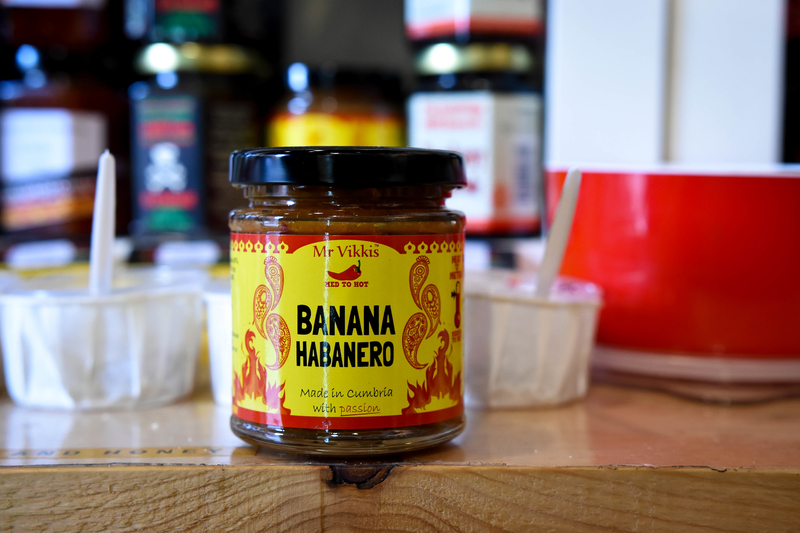 None of the chilli sauces he stocks directly market themselves as an aphrodisiac, but there are plenty with suggestive names, and a few that sound like magazines you’d find on the top shelf in motorway service stations. There’s also a range of chilli-themed novelty items - seeds that grow chillies in the shape of a penis, incase I fail to grow...you get the gist, a chilli condom if the experiment is a success; chilli lubricant if it isn’t.

We stick to the sauces. A banana habanero one, because banana, and a garlic sriracha, because garlic is known for its ability to improve blood circulation - getting it to all appendages, no matter how many inches away from the heart they are, ya get me?

On the way back to the office we stop at Kirkgate Market for oysters - a food so synonymous with their supposed effect on the sex drive that you’d think viagra was made of pearls. Higher in zinc - a known sex-boosting mineral - than any other food on the planet, they’re also full of Omega 3 fats which help with the mobilization of cholesterol, and boosts testosterone. 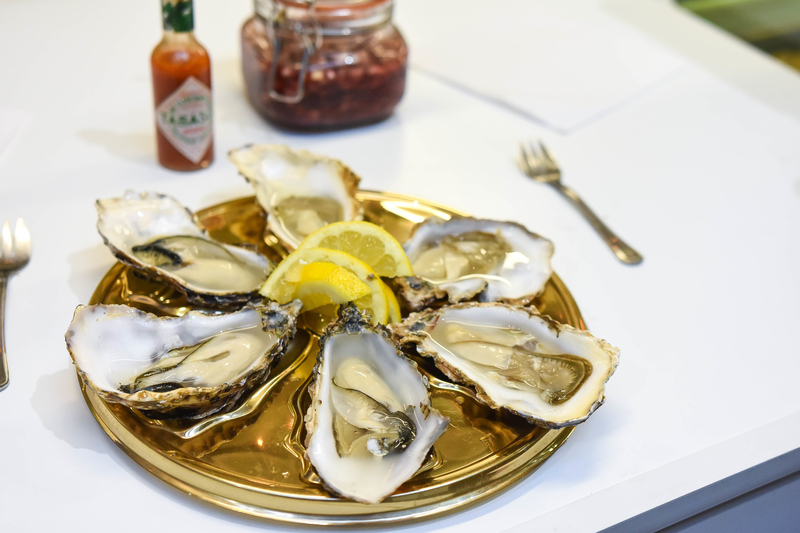 Regardless of the physiological effects of eating the oysters, Hayes oyster bar is just a cool little date spot in an otherwise uninspiring market - the only part of Kirkgate that might, if you squint, make you feel like you’re on La Ramblas in Barcelona. If somebody brought me here as a surprise, I’d put out for sure.

If Casanova exists in the crossover of a Food/Love, then nowhere else in the world represents this more than the Basque Country - essentially the crossover in a physical Venn diagram between North Spain - one of the best food regions on Earth - and France, the home of l’amour.

No surprises then that Basque restaurant Iberica’s menu is littered with aphrodisiacs. Apparently, Greeks drink a glug of olive oil every morning to cleanse the bile duct (turned on yet?) and strengthen the genitals. We just used it to dip bread into. Romans used to chew on raw anchovies for their aphrodisiac properties apparently - good enough for me, although I went for the cooked, packaged in oil kind. 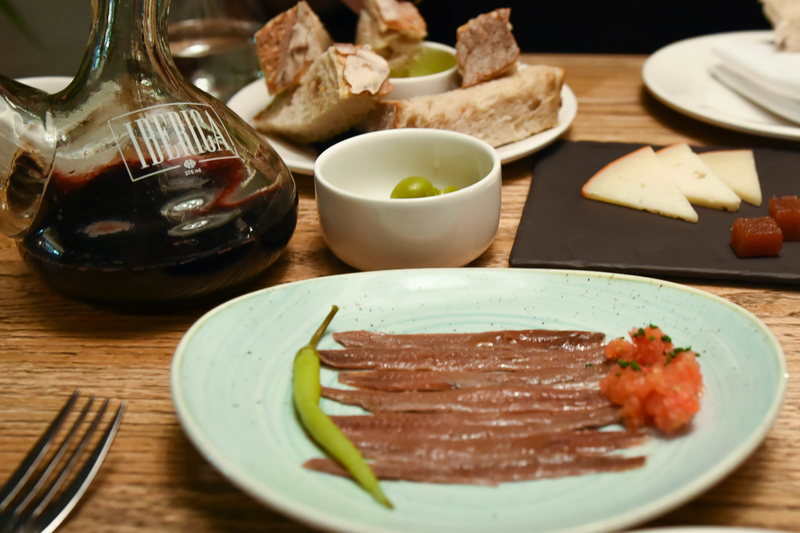 Goats cheese can contain ten times the amount of phenylethylamine - which releases endorphins - as chocolate, it also helps kill bacteria in the mouth to make you more kissable, and smells similar to human pheromones, to subconsciously get you and your dining partner going.

Asparagus is full of Vitamin C and E which are both instrumental in maintaining a healthy sex drive, it’s also a natural diuretic, which aids the body in getting rid of excess fluid and salt (grow up). It gets snaffled up flavoured with truffle - known in Spain as criadillas de la tierra, or “earth testicles”. 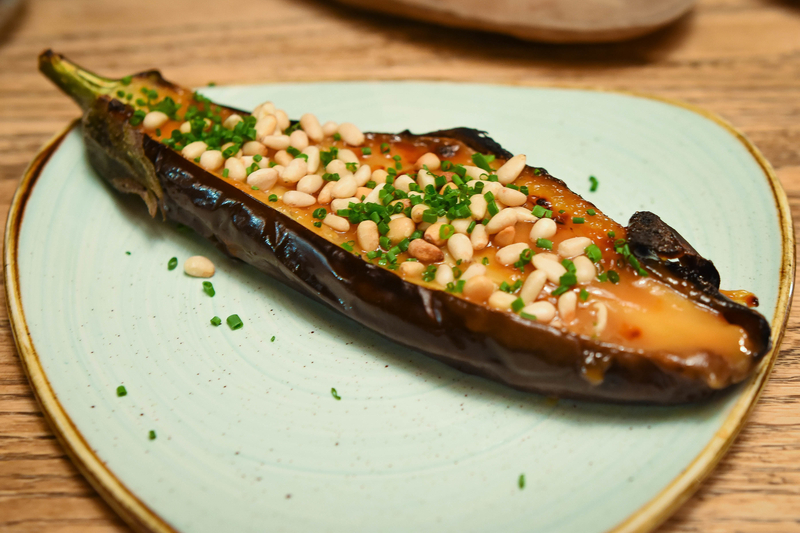 We order aubergine (you know why) with honey (which dates back to Hippocrates prescribing it for “sexual vigor”) and pine nuts (rich in zinc, common for centuries in love potions), and wash it down with a glass of Tempranillo (red wine relaxes you, and contains the antioxidant resveratrol which improves circulation) and Cava (the bubbles make the alcohol reach your blood faster, apparently stimulate your brain function, and replicate the aroma of female pheromones. One for the lads then, oi oi!

As we sit across the table from each other, sensually dipping churros (cinnamon warms your body up, vanilla was prescribed to ensure potency as early as the 1700s) into melted dark chocolate, I try and work out if the day’s diet has had an effect on me. Then I spill a big trail of chocolate down my beard and shirt.

“Do you think there’s actually anything in the science behind aphrodisiacs, or do you reckon it’s just because so many of them look phallic?” Lucy asks me, with a stubby, corrugated, and alarmingly curved mini churro in her hand.

Why did she think to ask that now? We had a massive aubergine on the table earlier, why couldn’t she ask… Never mind, bill please.

So, did the aphrodisiacs work? Are you kidding? Researching and strictly adhering to an eating plan filled the day with as much sexy spontaneity as living with severe allergies.

There’s definitely an appeal in the experiences, though - doing something out of the ordinary, like deciding to go to the market in the middle of the day to get oysters, or spending an evening at a fancy restaurant. Trying them all in the space of a day though, and you’ll finish the day sweaty, short of breath, and covered in melted chocolate - and not in a “mimicking a state of arousal” way, either...

Co-Op Live: Europe's biggest and most sustainable arena to open in Manchester
● / Things to Do