The future is green for Leeds’ independent coffee shops

Sustainability was on everyone’s lips as Leeds Indie Food Festival launched in May. Independents shared concerns over no-shows, packaging, even avocados. Cafes signed up to offer discount to customers with their own coffee cup. LIF’s Frank Green's one is fantastic, it’s stylish, BPA free, and doesn’t leak in your bag. But do we need a financial reward when we choose to reuse?

The conversation was started, but it certainly hasn’t finished.

Prompted by initiatives from Zero Waste Leeds and eco charity Hubbub, a new scheme is launching in September that will be a game changer for Leeds’ cafes. We spoke to three of them about what sustainability means for their business.

If you were going to be really sustainable, you wouldn’t be drinking coffee.

When footage of marine biologists removing a straw from a sea turtle’s nostril went viral, the indie’s jumped on the bandwagon, replacing plastic with metal or paper alternatives. Since then, over in Harrogate, Baltzersens' brave decision to remove takeaway cups entirely shook the scene. A substantial sacrifice for a small business with tight profit margins.

“When the high street chains start to do that, and really access masses of people, then it would be worth considering. But we’re only a year old and all of our business is office workers who take away a coffee," says Holly Bowman from North Star, first roasters and now cafe owners themselves with a recognisable stamp around the city.

Holly is a wealth of knowledge, her research with farms at origin enabling her to view her business with an ethical eye. It’s clear that she’s sensed a responsibility to lead the way for Leeds’ indies, now developing a bespoke plan with Hubbub.

At the moment, “independents are impacting really negatively on waste disposal,” she says, and that’s partly due to their preoccupation with Vegware. “The plant based lining is great, but it’s not doing any good. It’s advertised as compostable, but unless someone’s literally collecting it and sticking it in their own compost bin, it’s as bad as anything else. Vegware cups still end up in landfill."

It’s a shame that the Vegware name should come at such a price. Ste Thomas, founder of Rabbit Hole, tells me: “We spend more money on straws and cups and lids, but you still need to dispose of it properly, so what’s the point?"

Ste set up Rabbit Hole as a pop-up model, which comes with it’s own environmental challenges. His customers at events are in a disposable mindset, they’ve tried stacking cups on site, but he tells me, “it’s hard, you’ve got no control where they go.”

Now at Eat North, Rabbit Hole use china in a bid to reduce waste. “When you’re out and about it’s difficult, my car absolutely stinks just from taking cups and everything with us”. Alongside the Vegware issue, he’s avoided chucking used coffee grounds by offering them to gardeners, even a contact turning them into soap scrubs.

In an industry with a monumental carbon footprint, “it’s a drop in the ocean," says Tim Linley, ex-England cricketer, now the unlikely face behind Hyde Park’s Coffee On The Crescent. "If you were going to be really sustainable, you wouldn’t be drinking coffee.” I ask him if there’s a guilt there for cafe owners: “I don’t think there is,” he replies, “because I don’t think people think about the fact it’s come all the way from Columbia.”

Tim clearly set out to run COTC on his terms, opening as a living wage employer, even considering scrapping single use cups. “For me, I can’t afford to do it, if I lost ten takeouts in a day, that'd hurt my business.” He goes on: “Sustainability costs, it costs me money and it costs me time.”

At the end of a long day pulling shots, he takes me out to the allotment where he drops off his grounds, with any leftover food going to the Bedford Fields community, or Rainbow Junction down the road. He shows me the mixed recycling facility he’s paid for, overflowing with the whole courtyard’s waste.

My question is, do our customers really care?

As a former geography student, he views his patch as an environmental micro project. “My lease is five years, and I want at the end of the five years to know that this is in a miles better state than what it is now.” His drive is inspiring, but he’s quick to remind me: “Everybody I think on the indie scene is sustainably minded, but if you’re out of business in six months time, how sustainable can you be? My question is, do our customers really care?”

It’s an interesting point. Is an eco-lifestyle for the tote-swinging few who’ve already chosen to support local? Tim muses: “Everyone on the independent scene has got a reusable cup and a tote bag, but I don’t think that scene is representative of the scale of the problem.”

With this new recycling initiative, the indies are going to have to work with the chains, which Holly describes as “jarring”. The plan is for a communal collection point at Kirkgate market, with individual bins outside venues taking part. Holly adds, “it might be that we end up recycling some of Costa’s cups, we can’t discriminate”. It will involve a move back to cardboard, cheaper initially, but with that saving going towards the collection.

I asked Ste for his thoughts about indies vs chains as leaders of change: “It’s either from the top down or the bottom upwards. I think it would be quicker if it was the top down, there’s more publicity to be had if you’re a massive company.”

It’s clear that behind our indies are passionate people, thinking environmentally despite the cost. Some market their endeavours, others go about them quietly, but what’s great about the future for Leeds is that change is coming, harnessing a collective power to address consumer habits. Your morning coffee never smelt so complex. 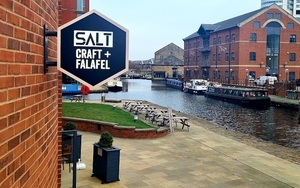