Old Man Miller goes out for a quiet steak - but does it cut the mustard?

Even before I arrive, there’s an inkling that the Cut and Craft might not be for me.

It’s an image on Instagram, or more accurately its accompanying caption, that does it. The picture, an attractive slab of tomahawk steak cooked medium-rare, sliced on the angle, and flanked by two halves of a well-grilled tomato, is sound enough.

However, the grimace-inducing caption beneath the tile - “Ladies, the way to his heart,” - makes me feel a little icky.

In all its pomp and plushness, the Cut and Craft has landed from its origins up the road in York. Clumsy captioning aside, it must be doing something right because the only time I can bag one of its many tables on a Friday is too late to be lunch and too early to be dinner. It is a meal of false starts and half-kept promises.

The ‘Cut’, as you may have gathered, refers to the broad array of cooked beast that the restaurant specialises in. Steak plays a leading role, and in these challenging times, it’s perhaps reassuring to know that you can flatten a flat iron here for the inviting price of twelve quid. It’s a decent if unremarkable piece of meat, lacking in smoky char or the offal-like hum one usually associates with this cut. Hats off for the pricing, though.

Perhaps the version coated in gold leaf, which is apparently a thing, might pack a little more punch. Or perhaps a gold-coated steak is, especially right now, just a bit daft and unnecessary.

There are “craft” burgers to get at too, or in my case a generous pile of roasted sea bass (£19.95). And the fish is good - crisp-skinned and firm. However, the small tower of dauphinoise it arrives with is tepid, woolly, and past its best. The luminous pool of saffron sauce promises much but delivers little.

A bowl of crackly, salty chips (£4.50) goes a way to providing some redemption, as a bowl of chips usually will. Other sides include tired and drooping French beans with shallots and peas (£5), and a truffle cauliflower cheese (£4.50) that has the off-putting top note of a bang-average oil.

It’s not all about the meat, and a heaped bucket of clattering mussels (£9.95) brings with it the promising scent of the seaside. It is, in fairness, a mountain of molluscs that have been skilfully steamed, but the “crusty bread” with which to dredge through a sharp, creamy sauce is erring on stale.

Similarly, a spin on that old-timer of beetroot and goats cheese (£8.50) starts off well enough but, thanks to a sickly sweet marinade, soon becomes a claggy chore.

The “Craft” element alludes to the booze, from which feel free to make your maverick selection from the likes of Peroni, Corona or Black Sheep. I have nothing against any of these – I know, I know - though even I can recognise that “craft” is doing a lot of heavy lifting here.

Bottles of wine start in the early £20s, and even though I politely point out that we’ll be fine to pour our own, several members of the team take it upon themselves to do the honours anyway as they float on by. They’ll be under orders, of course, yet it rankles.

I wonder if the balance sheet for the fit-out necessitates the inclusion of that gold-smothered steak on the menu.

It is a shiny and solid space, where the presence of a doorman and a DJ makes The Cut and Craft feel more like a nightclub than a restaurant. Some folk will love it, evidently many already do, but it’s only about 6pm when the volume creeps up, the lights fade down, and Old Man Miller has seen enough. 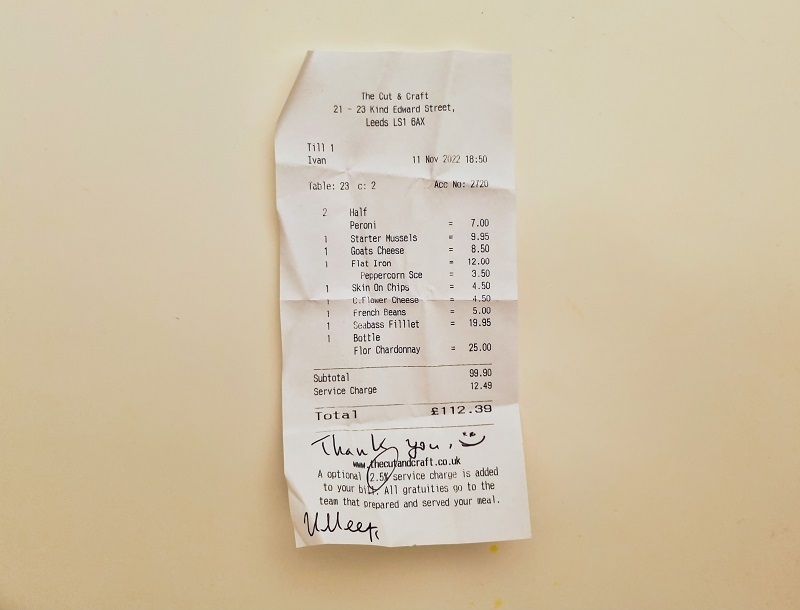