Week 43 in which crockery security is reviewed

Sleuth is a sideways glance at the city every week, it's the truth, but Sleuth's truth. He's several people all at once. Sometimes Sleuth even gets serious @mcrsleuth

THE RITZ AND THE FINAL FRONTIER

Sleuth was minding his own business racking his brains as to why the hell he simply didn't care about The Great British Bake-off when he noticed something. He noticed there was a massive queue on Whitworth Street West for the Flatbush Zombies, clearly an excellent band, even though he’d never heard of them. Or watched them - just as he’d never watched The Great British Bake-off. A girl was walking up the queue as it snaked past Sainsbury’s and up Oxford Street. “This queue is effing ridiculous,” she said in perfect Manc tones, “it's bigger than space.” Sleuth looked around for Brian Cox of the University of Manchester, Sleuth needed him to either agree or disagree with her. But Cox wasn't there. It's always the way with those particle physicists.

Sleuth was on his way from a tour at London Road Fire Station, now owned by Allied London. He was back at the ex-Fire Station on Wednesday night for a function to promote the proposed restaurant space in the Engine House to restaurateurs from the North and London. Sleuth concluded that the space will be one of the grandest and most atmospheric of rooms in Manchester dining when it eventually opens as these pictures prove. He was sat opposite Mike Ingall, the Allied London boss. Sleuth was eyeing the fireman’s poles. “Why don’t you use augmented reality on those, so when you hold up your phone to the poles you see firemen sliding down?” Without looking up from his plate of retro-lasagne, Ingall said, “That’s a great idea, we’ll do that.” “And maybe on each pole, the firemen could be dressed in the kit of the different decades when the station was open,” said Sleuth. “I like that too, we’ll do it. I'll sort it,” said Ingall and he was being serious. Sleuth wondered why life wasn’t always so easy.

Sleuth spent a lot of time around Whitworth Street this week. On one occasion he came across graffiti about food, on the Princess Street bridge over the Rochdale Canal. The graffiti was extolling the virtues of a vegan lifestyle. ‘If you love animals don’t eat them,' it said. ‘Choose compassion,' it said. Sleuth decided he liked this type of graffiti with its deeper message. Encouraged by what he’d read he skipped round the corner to try one of his favourite new dishes in the city, the ox cheeks with the egg and the herbs at The Refuge in the Palace Hotel. He wanted to prove that he loved animals by eating them.

When he got to the Palace there was a big mad launch party going on with apparently 1,600 people invited. Outside was one of the bigger disco-balls in world history. The dining and drinking area of the Refuge at Palace is another one of those truly grand Manchester interior spaces. Drinks were free from 6pm-10pm and everybody was shouting and giggling. It was a grand affair. “Who are you?” said Sleuth to a large person in the Winter Garden area. “I’m a tree, darling,” came the reply. “And here is the flower bed?”

Sleuth had been on a tour in the Palace Hotel earlier in the week. The tour had gone into the former vaults of the building where important documents had been stored when it was the Refuge Assurance Company. One of the people who’d worked there in the sixties said, “People used to come in here when there were Christmas parties and you know.” No, Sleuth didn’t know because he wanted it spelt out as he’d decided to ban euphemisms that day. “Have sex,” said the man when cajoled. It didn’t look very comfortable to Sleuth but then Christmas parties are Christmas parties. On the safe doors there were hand written notes saying ‘Side plates’ and ‘Cups and saucers’. “We used to store crockery in here until recently,” said a staff member. Sleuth thinks it’s always good to properly secure one’s crockery.

Some things are just stupid; Flora margarine, Boris Johnson, Fellaini as a holding midfielder, City’s European attendances, sinks with sensors that never bloody work, multi-coloured pens, Piccadilly Gardens. Piccadilly is never bloody right. True it gets popular on sunny days, as proved recently, and you can see why. There’s the pulling power of tatty grass, stained pavements, a broken fountain, a big bare concrete wall and some high planters to hide drug dealers selling skunk - beautiful. No wonder people flock there. But why does it need mending so much? It’s fenced off once more at present. Piccadilly Gardens is just stupid. The council’s present work recalls the legend of Sisyphus. Look it up, if you can be bothered.

RAPID RESPONSE TO AN ESCALATING SITUATION

Sleuth was in Piccadilly on the way to the Portland Hotel where he was picking up some Japanese guests. It was early. He started to describe Manchester with his back to the reception wall with the eyes of the guests upon him. As he was talking a nasty silent movie worked itself out behind the Japanese tourists' backs, through the window on Portland Street. One of the city’s aggressive beggars rushed past topless but was rugby-tackled in the middle of the street by two men and punched. It seems he’d robbed something. As Sleuth tried to be the most entertaining he’d ever been so that his gracious guests didn’t turn around and see the turmoil, the police arrived in a van and within about three minutes from start to finish the whole thing was over. The beggar in the van, the other men being interviewed. Sleuth was impressed, he scarcely sees police in the city centre, so the efficiency of the response was rewarding especially as none of the guests had seen the action.

MISSING THE OTHER MEN

Yet Sleuth felt something was missing from the scene. He became aware one of the Japanese guests was taking a look at an MEN in the reception. He was looking startled. The headline was ‘Mum’s Horror As Thug Punches Baby’. Sleuth suddenly knew what was missing. Where was the MEN to capture the tragic scene on Portland Street. How remiss of them not to be here when there was some crime to be covered. Sleuth reckons the MEN have a room with all their vilest headlines and editors regularly walk among them saying, “Yeah, that was a good one, we’re proud of that.”

Something that was also stupid this week was amusing too. Sleuth was in the excellent City Arms on Kennedy Street. Nearby a man was saying to his mate, “What was the name of that film about a horse that goes to war?” “Warhorse,” said his mate.

NEW DEVELOPMENT GETS GO AHEAD

Sleuth is pleased Capital & Centric's Kampus development was approved this week. The name, they say, refers to the site's former use as part of Manchester Metropolitan University. But who are they kidding? Given its location over the road from Canal Street in the Village, Sleuth knows it's a cheeky interrogative. Kamp us?

Back to London Road Fire Station and Sleuth was talking to one of the women who’d worked in the Control Room about the pranks the firemen used to play on them. “We’d get our own back, though,” she said. “They used to have their boots lined up so they could slip them on quick when a call came in. We used to put corn flakes in the boots and they wouldn’t have time to empty them so we could hear them crunching to their vehicles. They could hear us laughing our heads off.”

Sleuth feels guilty and not only because he couldn't give a monkey's about the Great British Bake-Off or the truly big world issues, such as the breakdown in Brangelina negotiations. He was feeling guilty because he's been rushing about so much this week people couldn't actually focus on him. He was a blur. Thus he failed to make the launch of Buy Art Fair, Thom Hetherington’s wonderful celebration of art, the best in the north, on Thursday. But he will be going along to Old Granada Studios this weekend. He recommends anybody who feels they want to dip their toe into the purchase of art - you'll never feel cleaner - to give it a go. Thanks to Jess Middleton-Pugh for the picture. 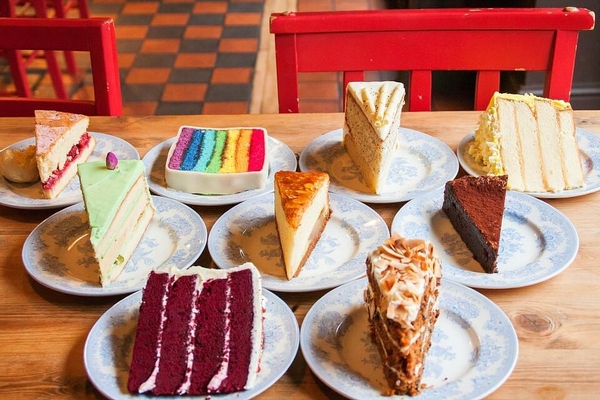 10+ new restaurants, bars and cafes for Leeds
Read Next
● / Travel