"This was once the most exciting food in the city" Restaurant review: The Man Behind The Curtain

The venue might have changed, but everything else feels familiar as Thom Archer revisits this Michelin restaurant

I wouldn’t usually review the same place twice in just over six months, but this week there’s some extenuating circumstances. Firstly, it wasn’t my choice, but Dan’s. Just before Christmas, Manjit (of ‘s Kitchen fame) hosted a charity raffle which local independent businesses rushed to contribute prizes to, including the chance to join me in reviewing a restaurant of the winner’s choice. Dan’s number was picked, and there was only one prize he was interested in. With the £200 Belgrave bar tab already snapped up though, he settled on the meal with me. What swayed him towards the £125 a head tasting menu with wine pairing at Man Behind The Curtain is anybody’s guess…

I was due a revisit, anyway. This isn’t actually the same restaurant that I reviewed all the way back in May (which you can read here); it’s upped sticks from the distinctive clothes shop attic location, and moved into that same clothes shop's basement, in a £1.1million bespoke fit-out with a custom designed kitchen, lavish natural materials, and even robot toilets that spray water and warm air up your bum. Well I suppose that’s one way of (wait for it) maintaining your ‘Michelin star'

Just as in the restaurant’s namesake though, monotony is interrupted by the glorious technicolour reveal of Oz

The dining room itself is filled the with trinkets which give it the feel of a couture Hard Rock Cafe; a matte-blacked-out motorcycle, some old chef’s whites on a tailor’s mannequin, and a black marble surfboard suspended upright. Your guess is as good as mine. Combined with the interrogation lamp above every table and the mirrored pillars which simultaneously create the illusion of space where there isn’t while making the open-plan venue feel claustrophobic, and you’ve got a pretty disorientating atmosphere. 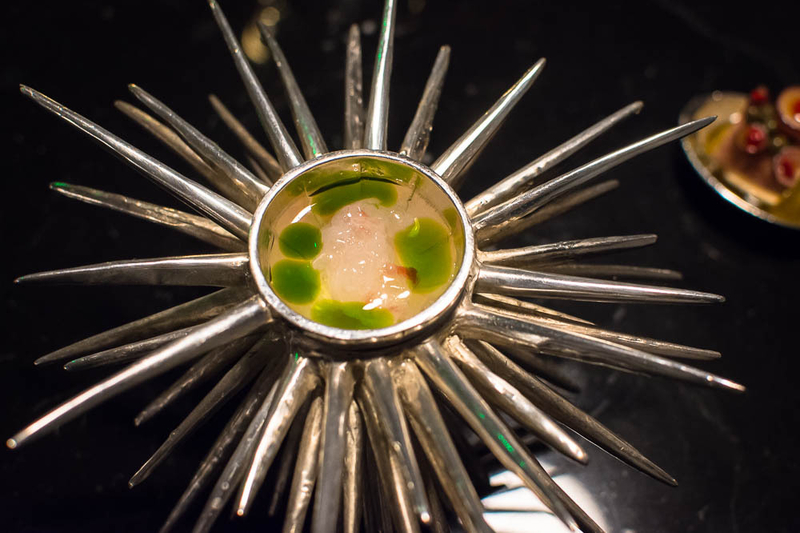 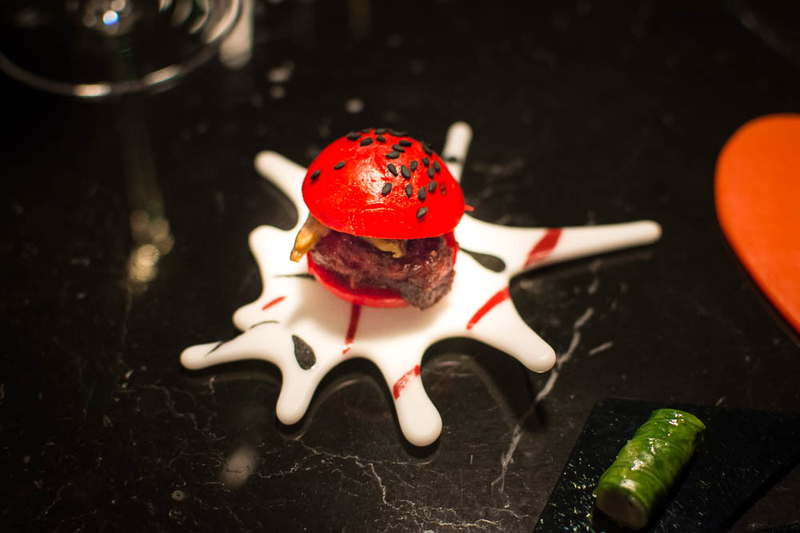 Just as in the restaurant’s namesake though, monotony is interrupted by the glorious technicolour reveal of Oz; a miniature bun in a nuclear launch button shade of red, filled with rowdy XO-sauced veal pancreas; a lava lamp of langoustine tartare glows luminous green with parsley oil; a spoonful of octopus served sucker-up is pure HR Giger, there’s a bright red emulsion left on the spoon and I instinctively check my lip for blood fearing the thing’s attacked me.

The thing is though, we’ve seen it all before. This is mine and Dan’s third time eating here since 2015, and it’s our third time eating the majority of the dishes on the menu, as they’re wheeled out like a tried and tested anecdote. Instead of being enraptured by the spontaneous cadence and witty asides, you roll your eyes at the punchlines and pick away at plot-holes. Take “Iberico pork, garlic and almond” - the only way it’s developed or evolved since our first taste is getting its Pollock-esque presentation down to a Fine Art. When you get over that, there’s little to distract us from the fact it’s a fairly inelegant combination of dull richness and vociferous vinegar, crowned by a ping pong ball full of the cremated toast crumbs. 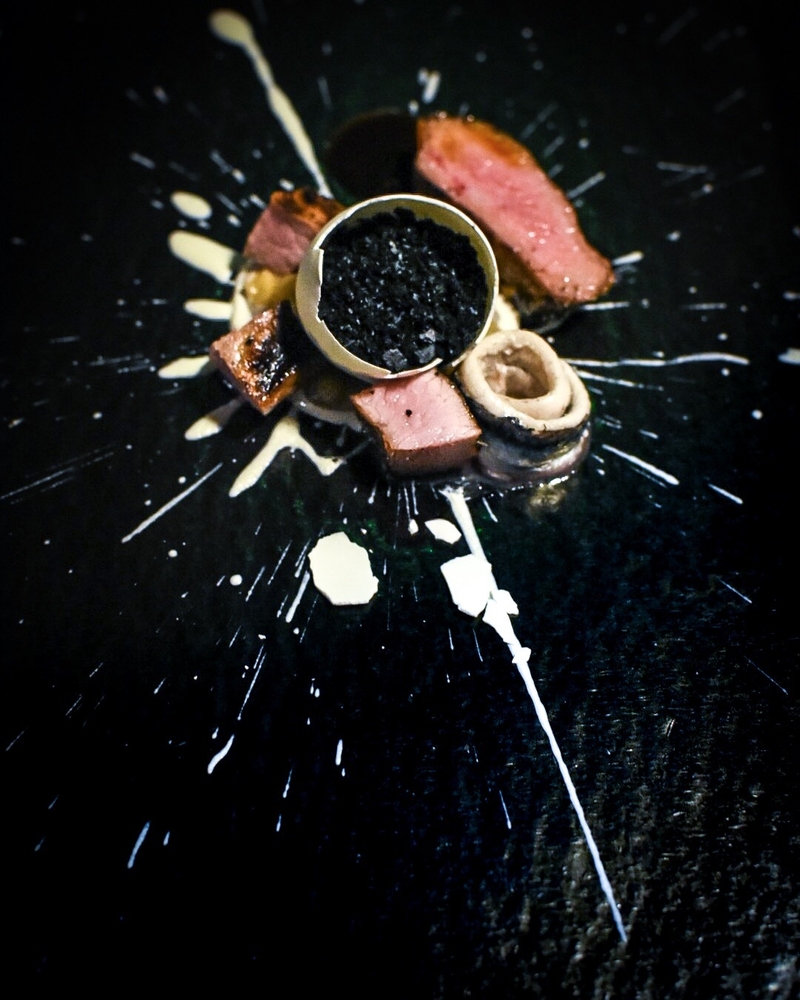 The other headline dish is more complex - “Emancipation”, the chimney sweep’s fish supper, is a beacon of white cod surrounded by black. Black crockery, black dashi, and summits of black vinegar powder on top of it which, if you happen to breathe near a forkful, will have you spluttering as if you’ve got the black lung.

With a few exceptions it's all good stuff, but this was once the most exciting food in the city - in the country, even - and now it’s just a bit...mundane. How do you continue subverting expectations when being subversive is your whole schtick? The new room might take you out of your comfort zone, but O’Hare remains devoutly within his. 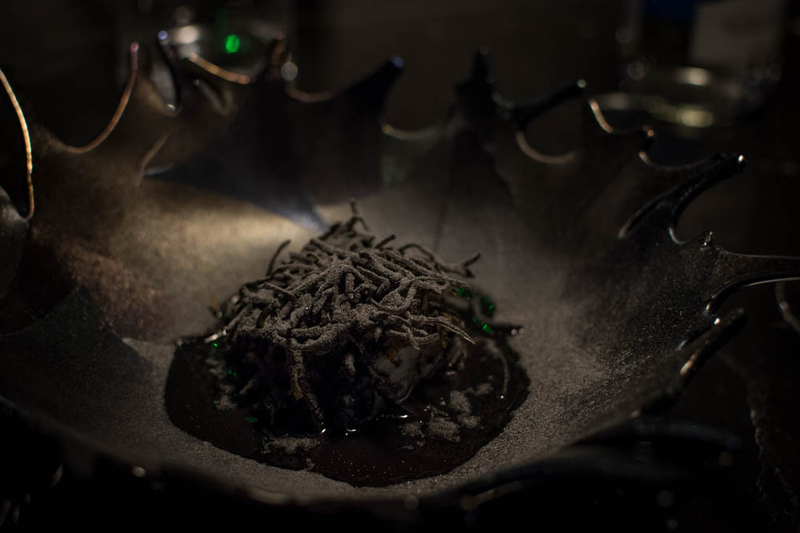 Dan Barnett runs Leeds supperclub Dinner at the Manor. His favourite local restaurant is the Swine that Dines. He’ll eat absolutely anything but has a penchant for good sourdough, salty butter and a nice strong cheese.

“I haven’t been to Man Behind the Curtain since it was awarded its Michelin star and have been intrigued but dubious about the dark and clinical décor of the new venue below Flannels. In reality the space was far more intimate than expected. A sea of monotone lulls your senses into a false sense of security before the attack of colour from the kitchen. 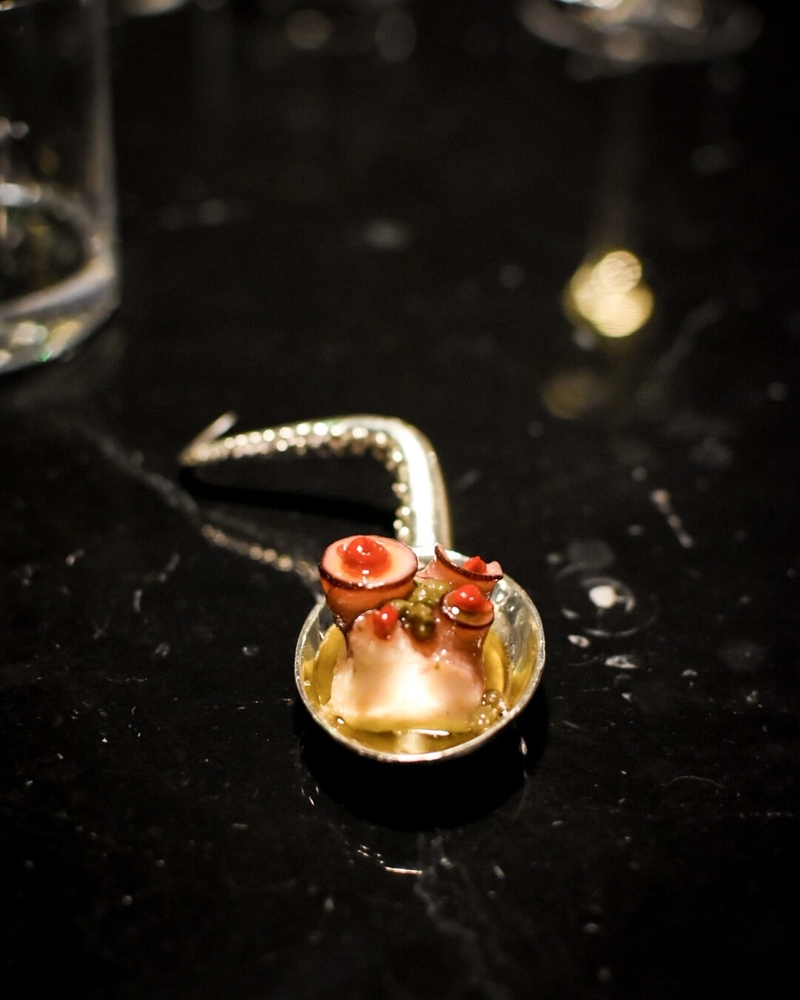 Snacks started this onslaught of technicolour in our black and white world. Our intergalactic treats included a bright red veal sweetbread slider that oozed Japanese flavours and a perfectly cooked ‘hand massaged’ cube of tender and meaty octopus. All were presented in their own inimitable way on custom made fluorescent crockery.

Some of the newer courses were the most stand out for me. An unctuous beef tartare came as a healthy portion and was paired with a superb house-infused vermouth - the sommelier adds fresh orange and green olives every day, and it’s stunning! A Jamaican style hake throat with spicy sauce and stodgy dumpling was a perfect match to Sorachi Ace from Brooklyn Brewery. 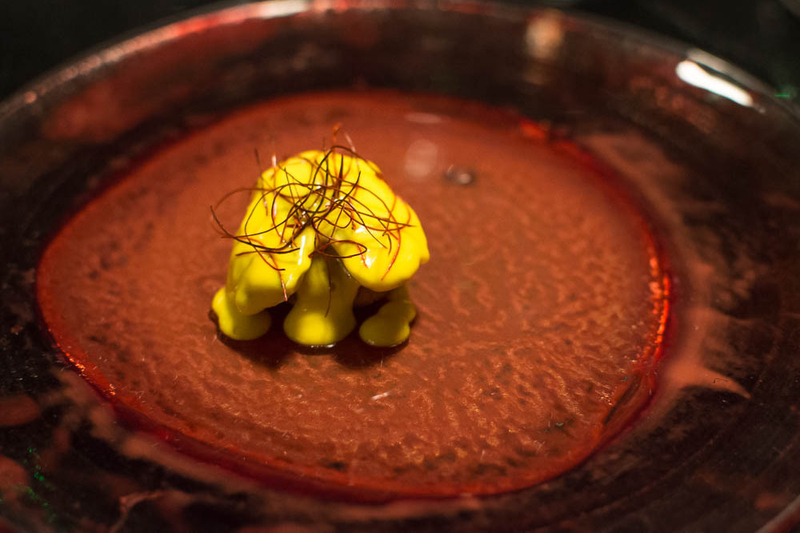 As course upon course of unidentifiable (but tasty) fodder was presented to us it became clear that these were just a prelude to the main event – O’Hare’s signature dishes.

Emancipation - the famous black dish from the Great British Menu - has come on leaps and bounds since I first tried it three years ago. A robust fish paired with the right balance of throat tickling salt and vinegar dust. The Iberico pork is now a stunning work of art, but for me was just a pinch of salt away from perfection. 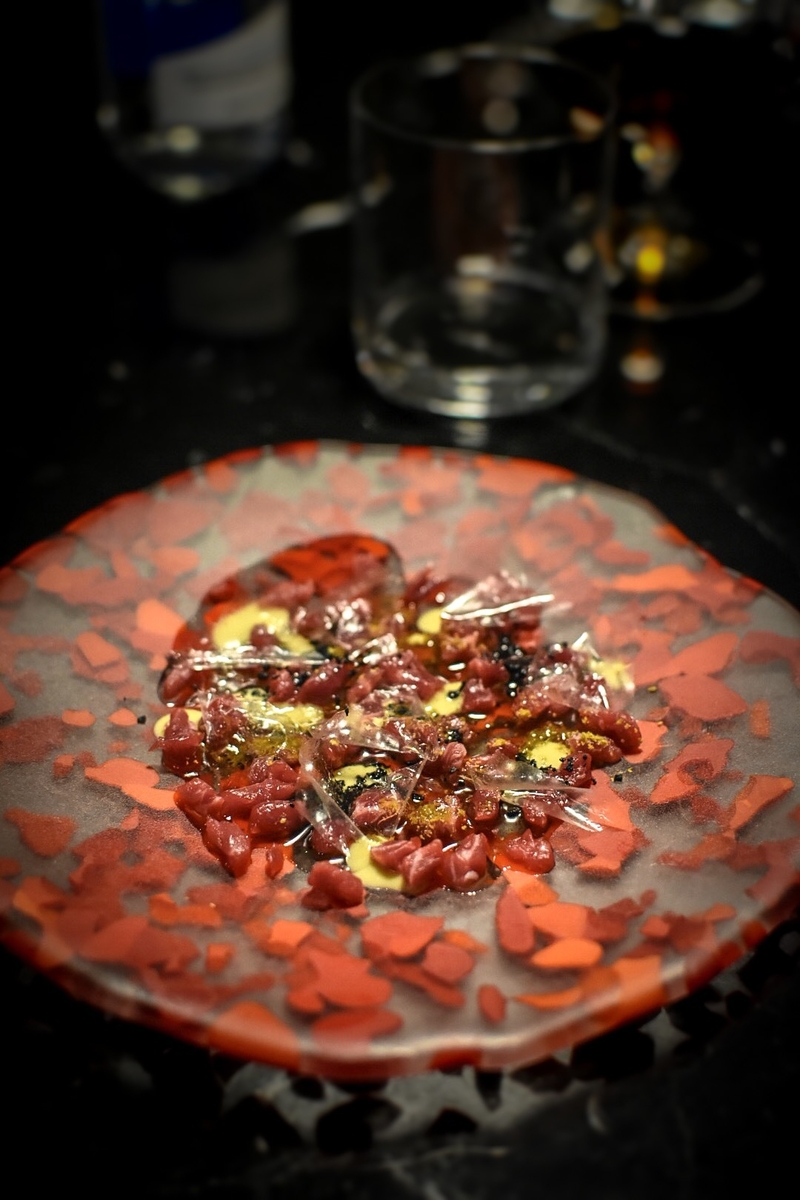 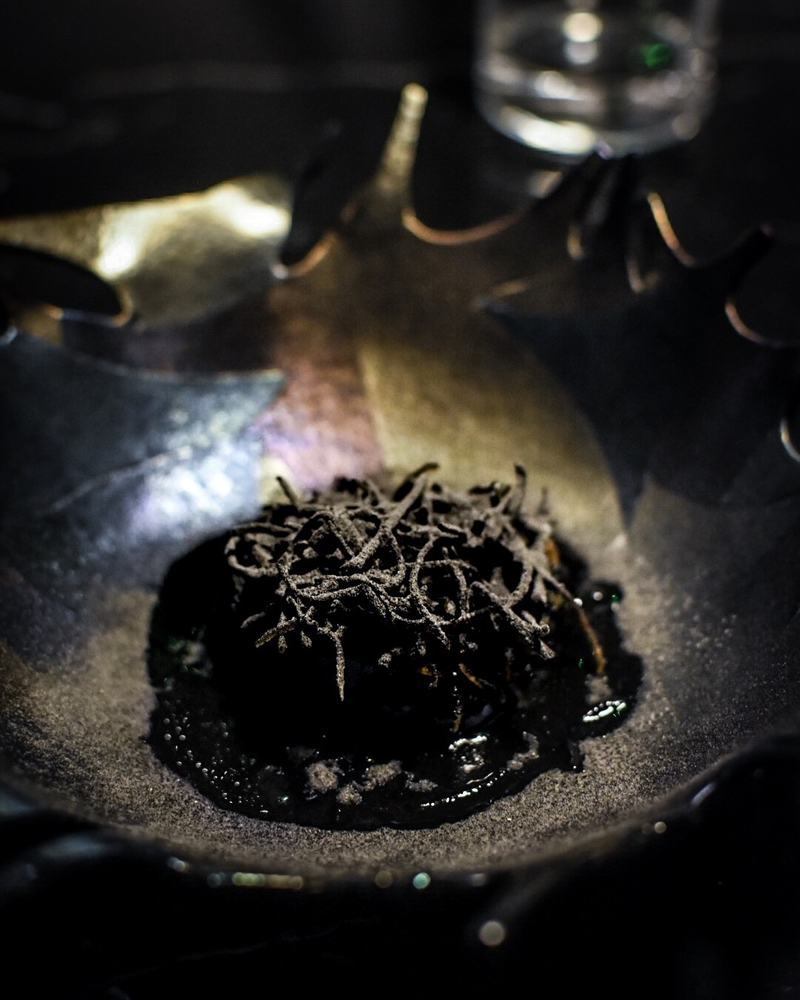 I have praise indeed for the delightful waiting staff who served everything with unconscious efficiency and symmetry, and our meal arrived at the perfect pace. My criticism is at the lighting and noise levels in our monochrome dungeon. The music drowned out the food and wine introductions, and an eye level lamp above our table left me with a throbbing forehead by the end.

Having been away for three years whilst the team hone their craft, I was surprised at how little the menu had changed. At least 50% of the dishes I had tasted before, but they were all vastly improved, in terms of taste, presentation and portion. 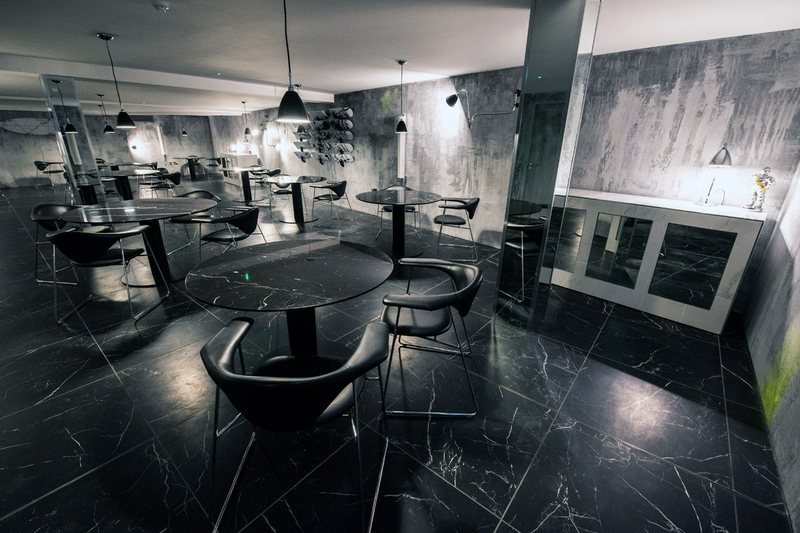 Despite my issues with the surroundings I think I get what O’Hare is doing. He dulls your senses on arrival to ensure maximum impact of his zany, technicolour offerings. He then bamboozles you even more with disorientating mirrors, sounds and smells so your brain adjusts to expecting the unexpected, but without question - creating the ultimate backdrop for his signature masterpieces.”

Atmosphere 3/5 - Love it or hate it, it imposes on the general experience

Service 4/5 – Seamless, attentive, passionate (if you can hear them)

Man Behind The Curtain factfile