FOR me, January normally means two resolutions: eat less meat and go to more gigs. Making good on the latter, I found myself booked in to a Sunday gig at the Brudenell Social Club, and in need of some decent pre-concert food in the LS6 area. Headingley High Street is full of solid options, but it’s the back streets of Brudenell that, in my humble experience, tend to throw up the more interesting eats – small, tasty stores that pop up for a few years and then leave, much like the student population they feed.

Bacon-flavoured crisps and dollops of more BBQ sauce on top of chunky-cut chips… where have you been all our lives?

One that looks as though it may stick, however, is Punk Vegan. Having changed its name from Vital Punk to the more self-explanatory current title, it has many of the finer details of a good vegan establishment off pat. The resident milk is oat (easily the most superior of all the non-dairy milks), the cheese is cashew (none of the disgusting coconut stuff you get in supermarket ‘free from’ aisles) and, perhaps most strangely satisfying of all, there are 150ml cans of diet coke for just 75p, which we determine to be the perfect meal accompaniment size.

Arriving early afternoon, it’s exclusively populated by students on mates dates, or finishing assignments on laptops. The space is small, and has an enduringly DIY feel that feels akin to paying to eat in a mate’s house – they don’t do receipts, and the entire operation seems to be a humble set-up of one chef and one cashier. The radio is on, and you’re half tempted to pop behind and offer to help with the washing-up. No interior-of-the-year awards will be won here, but it feels honest, and you could easily imagine spending a quiet moment with a book and one of their beetroot cacao lattes, or grabbing a snack to sneak into Hyde Park Picture House opposite.

But onto the food. The menu is sizeable for such a little kitchen, with an abundance of tempting-sounding burgers and pizza dominating the page, as well as a variety of breakfast options. In the spirit of that ‘healthier’ eating resolution, the Naked Burrito Bowl (£8), does exactly what I want it to – the sort of dish you could very smugly serve to a carnivore mate who insists that veganism is a joyless enterprise. Jalapeño mayo-drizzled chickpeas, a flavourful mushroom-mince chilli and particularly crisp tortillas… it’s an excellently executed bowlful of surprising flourishes, with enough textural difference to not have you fishing around for the meat. 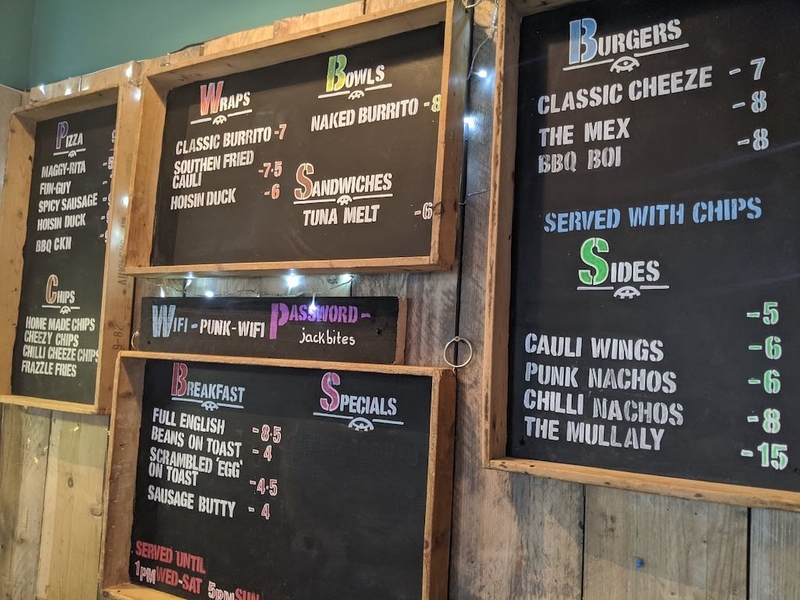 My dining partner is making similarly light work of her Southern Fried Cauli Wrap (£7.50), which is rammed full of florets coated in spiced gram flour, creamy slaw and BBQ sauce oozing out the sides. She proffers a thumbs-up, but we both agree that for its size it feels a little on the pricey side, especially looking around to the table across where those folk are in possession of ginormous, juicy-looking burgers which eclipse the size but only cost 50p more.

Luckily for our still-peckish bellies, we also ordered a size of Frazzle Fries (£6) to share. Bacon-flavoured crisps and dollops of more BBQ sauce on top of chunky-cut chips… where have you been all our lives? It’s a little known vegan fact that a lot of meat-flavoured crisps don’t actually contain meat at all, so this crunchy-topped dish is a perfect way to get that salty essence and flavour without resorting to real bacon; a great ‘dirty’ treat for those transitioning into a plant-based lifestyle. The plate is taken down in no time, and resolution is made to put this on order next time we’ve had a heavy night out.

Is Punk Vegan the most elegant or refined of meals? Absolutely not. Could you make it at home a wee bit cheaper? Probably. But sometimes you can’t be arsed to make it yourself, and a Just-Eat establishment that you can speed-dial after a long day without feeling too guilty is exactly what you need. Punk Vegan can certainly be that place, and is sure to be the first of many of its kind popping up left, right and centre right across the country as we move towards a more animal-friendly lifestyle. The future is here, and it tastes a lot like cashew cheese…