Pizza, it seems, has taken over the world. It used to be exotic to get a panini at your local cafe, now you can fold triangles of the stuff into your mouths in every rural English town. Last Summer I had a proper Neapolitan Margherita in a sleepy Suffolk village on the outskirts of Bury St Edmunds. I found a pizza van doing slow-cooked lamb and Levantine aubergines on sourdough bases outside a coastal Northumbrian art gallery. Even Grantham has a Prezzo.

But who can blame us? Pizza supplies instant gratification. It’s casual, affordable, shareable, and you don’t even need cutlery. I’d have a 16-incher on the noose. With a bottle of red - and maybe a few fat green olives.

Leeds isn’t short of pizzerias; There’s Pizza Fella on Vicar Lane, Rudy’s, Pizza Luxe and Franco Manca in the centre; Pizza Loco up in Oakwood and Napoli Nel Cuore in Horsforth.  There was MOD Pizza, which opened in 2016 with the backing of Carphone Warehouse founder and Five Guys investor, Sir Charles Dunstone. Despite its Facebook fandom, it didn’t survive lockdown and Pizza Punks has taken over its large site on the corner of Bond Street.

At first glance, it’s the same soulless chain with aggressive neon signage, promising authentic dough and gourmet ingredients. This is the fourth UK outlet from Glaswegian entrepreneur and former owner of the Bar Soba Group, Brad Stevens. With a new Thai bar and music concept, and two more sites opening soon in Manchester and Bristol, Pizza Punks is reportedly set to turnover £5 million this year. It’s a little ironic given the blurb online: “We love challenging ‘the norm’ with our anarchist and anti-establishment outlook. We stick the finger up to the corporate chains run by money men by putting people and products before profit.”

Pizza Punks’ “unique dining experience…giving power to the people” also seems familiar. One set price for as many toppings as you like? Maybe this actually is MOD reincarnated. Both restaurants bandy around the word artisan, both sell individuality in a carbon copy environment (I’m pretty sure you can create your own masterpiece at Pizza Hut). However, whereas MOD, short for Made On Demand, promised fast and hot, Pizza Punks appears to specialise in slow and cold.

We enter without a booking to a half-full restaurant. The waiter plays the old “we’ll try to squeeze you in” card. Then, a series of seven staff members ask us what we’d like before we get the chance to read the menu, or actually say hello to each other. They’re fighting to serve us. No hospitality crisis here. In fact, the website describes this as all part of the “punk vibes”. A blend of “kick-ass playlists” and “Hell-Yeah Hospitality”.

If only the food moved at the pace of the team. Despite the rush for our order, it’s well over an hour before anything arrives. I watch as our starters are prepared on the marble bar around the giant angular pizza oven. They sit, ready, for twenty minutes, the staff in a frenzy of confusion over checks and table numbers. Raising the temperature of the mac and cheese (£5) wouldn’t do much to improve its flavour. Tiny tubes of ziti cling together in an oval skillet of cheddar and mascarpone glue. There’s a red chilli symbol next to its listing on the menu but it doesn’t taste of anything at all.

The olives (£4) are small shrunken spheres, piled in a dish of those sweet teardrop-shaped peppers and chunks of raw garlic. The burrata (£8) is properly fridge cold, which distracts from its creamed lusciousness. It rests like a pregnant water balloon above a slice of rosemary and garlic focaccia which, lightly griddled, has the texture of those mini white rolls from the freezer aisle. The rocket is a tad shrivelled, the hot honey dressing a gloopy but cooling balm slathered over the pizza.

An advocate of less is more when it comes to pizza, I opt for the salami (£9) from the list of classics and specials beside the main attraction in capital letters: CREATE YOUR OWN. I was content with my choice. Generous rings of salami, flecked with chilli flakes surrounded by a dark bubbling crust. The pizza wheel is a nice touch, but once scored it’s evident that the underside is totally black. Carbon, charcoal, BBQ - black. But I skipped lunch so it’s going in anyway.

My dinner date braves the pasta (£9). Her own concoction of rigatoni with peppers, basil, tomatoes, plus lemon and herb chicken. She buys the paragraph about the pasta being handmade daily but the sauce seems suspiciously re-heated - and needed longer. A garden salad (£3) is all julienned carrot and raw onion. The drinks are spot on but there’s no chance to sample candied bacon creme brûlée because she’s late for a train - and by now, it’s well past bedtime.

Pizza Punks is a step up from MOD, but despite the “anarchy,” the menu reads like a dictionary of generic buzzwords. There’s nduja, craft beer, and vegan cheese everywhere. You can get sriracha pork belly and caramel banana Biscoff on a pizza these days for Christ's sake. This isn’t inventive or unforgettable but, for a small high street chain, it has raised the bar. Just don’t go in there for a riotous, radical, revolutionary, experience. The rulebook is still intact. 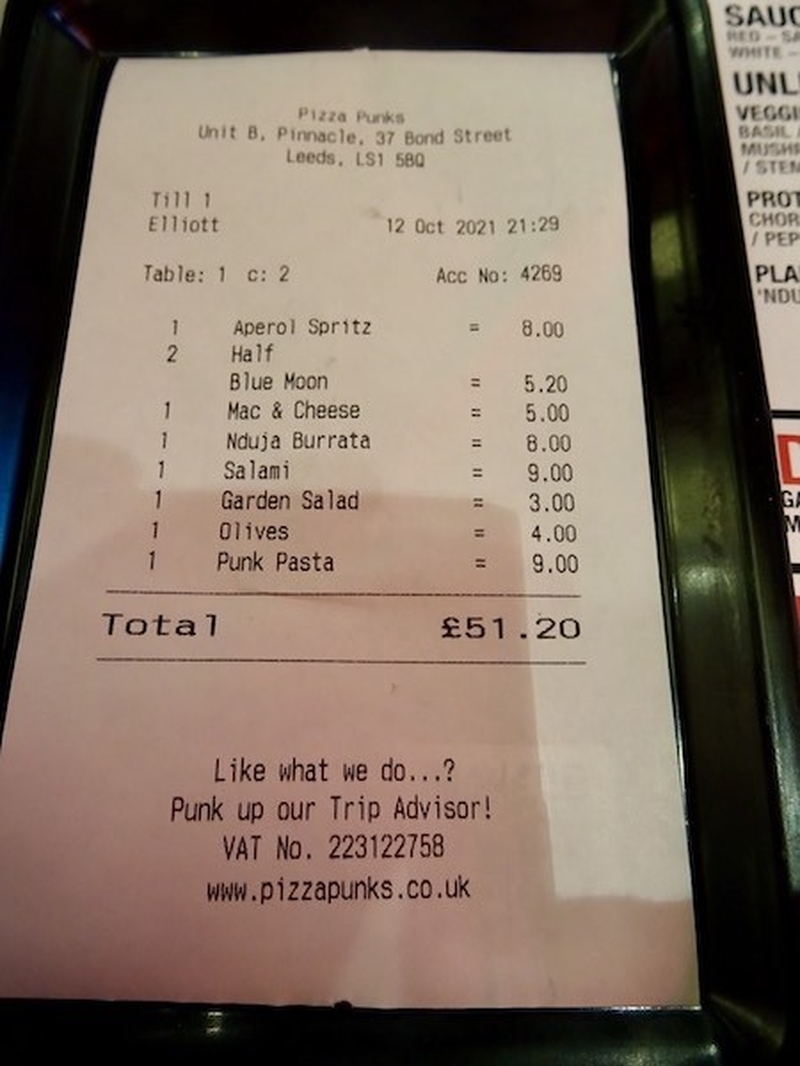