We speak to Noisette's Sarah about the unique new brew-bar, bakehouse, and general store

A new destination coffee shop is coming to Leeds this summer, as a collaboration between two of the most renowned names in the local food and drink scene.

Noisette Bakehouse is based in Huddersfield, but Sarah and Hannah, the team behind it, are familiar faces all over the area having spent the past few years distributing bakes at events via their Madeleine Express van, and earned nationwide recognition after winning a Young British Foodie award in 2014.

They’re joining up with North Star, coffee wholesaler and roaster extraordinaire, on a joint venture alongside their Leeds Dock roastery and training academy.

“The academy’s amazing, it’s used for coffee grading, accreditation courses for professionals, and home-brewing courses for regular people - I think there’s only three in the UK at such a high level for sensory analysis” Noisette’s Sarah tells us. “It’s almost lab-like, the lighting has to be a certain brightness, the tables a certain height, there’s no perfumes allowed - nothing that might interfere with the grading of the coffees”

Sounds like a great environment for grading coffee or performing an autopsy, but perhaps not the cosiest way to enjoy a brew. As you move next door into the new space though, things will get a little more character.

“The decor has a real nod to coffee origins; things that North Star have picked up on their travels. In terms of the set-up there’s space for about sixty covers, then a kind of open, galley kitchen, a brew bar, and then a service counter with display for all of the baked goods”

“We’re really inspired by American breakfasts, the kind of thing you get at neighbourhood bakeries - you’ll go in and get your coffee and a sweet or savoury scone, or a muffin, or a streusel-top cake - that’s how our morning cake came about.”

“There’ll be granola, overnight oats, baked oatmeal - nothing big and brunchy during the week, but a little bit of an extended breakfast, and plenty of stuff to grab and go,.”

As well as the bakes and light breakfasts, they’re offering a genius-sounding ‘Toast Tapas’

“The plan is to make our own cultured, compound butters to go with our toast tapas - honey butter, chilli butter, or a particular herb that’s in season, lovage, things like that - to pair with jams and preserves that’ll change seasonally. Maybe rhubarb jam with sweet cicely butter. Not just your bog-standard toast, but not a fill brunch item either, but something with variety so people can have a play around if they’ve got a little bit of time to spare and have a pot of tea.”

As well as tailoring the convenience towards the crowds in local offices such as Sky and Google, Sarah’s making sure that regulars at nearby Primal Gym and Yoga Hero will be catered to as well: “There’ll be plenty of vegan and gluten-free options as well, that’s something we enjoy doing - providing things that don’t look or taste any different to any of the other baked goods”

Noisette and North Star have worked closely on the new food menu to make sure their individual offerings compliment each other. “Pretty much everything has been created or tweaked for the new place - down at the training academy they’ve got massive posters with all the flavours and tasting notes, so it offers a great chance for us to play around with flavours in the food offering - our Morning Cake has got tonka bean in it, which works super well with coffee, especially a black filter coffee; our chocolate brownie has a super-intense cocoa flavour, that works particularly well with fruity coffees.

There's a big emphasis on tea as well, and we've been using them in our bakes, as well as pairing them with drinks, like jasmine tea or a citrusy green tea to go with the fresh blueberries in our breakfast muffin”

“Things like avocado on toast and shakshuka are great, we didn’t feel the need to recreate it down at the dock - we’re inspired more by American-style baked goods, the kinds of places that we’d visit when we go on holiday”

The cafe also functions as a general store, providing Leeds Dock residents with an alternative to Tesco Express when they’re caught short while cooking tea, or just fancy treating themselves on the way home from work.

“The general store will be like a pantry, larder style thing, selling fresh organic eggs, fresh bread, in-season local veggies like local forced rhubarb around February, maybe some heritage tomatoes in the summer, autumn squashes - not a huge amount, just some bits and pieces related to what we’re serving on the menu.

It’ll also be stocked with things made in-house; preserves, jams, infused sugars and flavoured salts, as well as items by people that we think are doing great things outside of food like ceramics, handmade crafts, plants, things that compliment the food offering”

The collaboration between Noisette and North Star is a natural fit beyond the obvious fact that cake goes well with coffee: both share principles of using products that feed from their environment and allow that to influence how they’re used.

‘We’ve got a bit of a honey library here in the bakehouse and we want to showcase those in the general store. We’re working with our beekeeper to set up some new hives and extract honey from bees that have flown within a 5-mile radius of the site, so it’ll be super local in that respect.

It’s amazing how during the course of the season honey changes, and that informs the bakes: spring and summer honey works well with fresh fruits and herbs, autumn ones work with spices and feel really comforting - it’s really natural and follows how you want to eat.”

The general store will go some way to providing Leeds Dock with a decent bar that it’s been calling out for. “We’ve got a license for a small selection of local craft beers, nice wine, and gins.

People can come in from their way home from work, maybe have a beer and some little plates of cheese, house-made crackers and chutneys, bits and pieces like that - little nibbles that we’ll also sell in the general store. In the summer we’re planning on opening from 7am until 7pm to give people chance to do that” 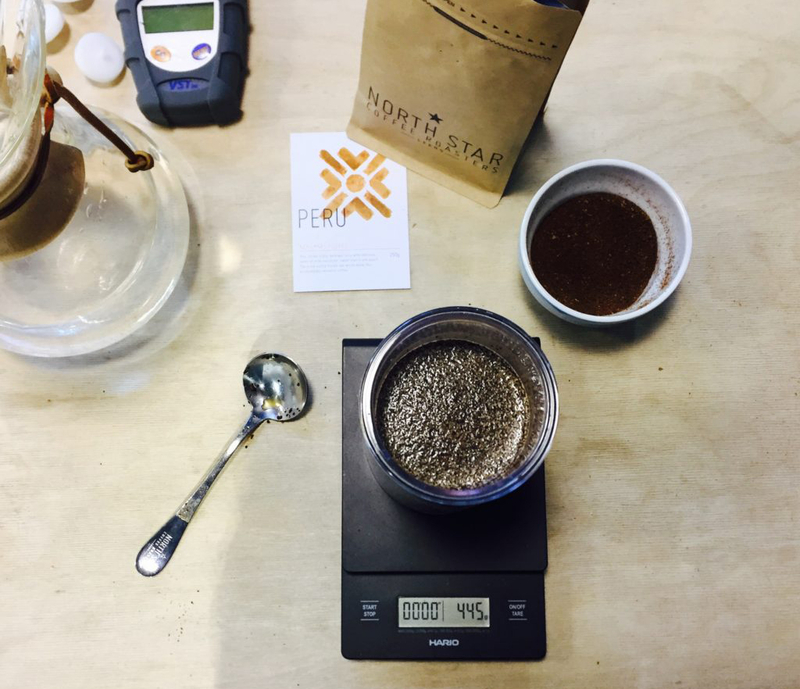 On the coffee side, North Star are hoping to raise the profile of filter coffee and speciality tea in the same way that espresso-based coffees have had a boost in recent years. This'll be with the aid of all sorts of gadgetry and high-tech brewing methods, such as taps that instantly pour water at the precise temperature the bring out the flavours in different types of tea and coffee roasts.

Combined with Noisette’s small-batch neighbourhood bakery vibe and artisan-pantry, we can tell that this isn’t going to be just another coffee shop.

North Star Coffee Shop and General Store is due to open early July.