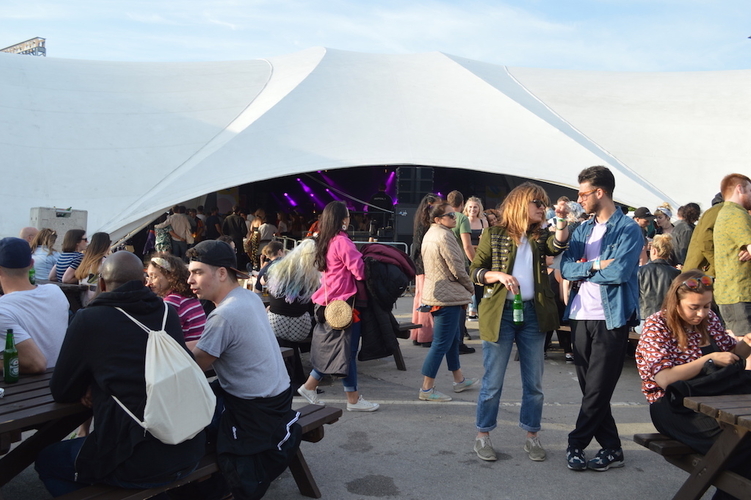 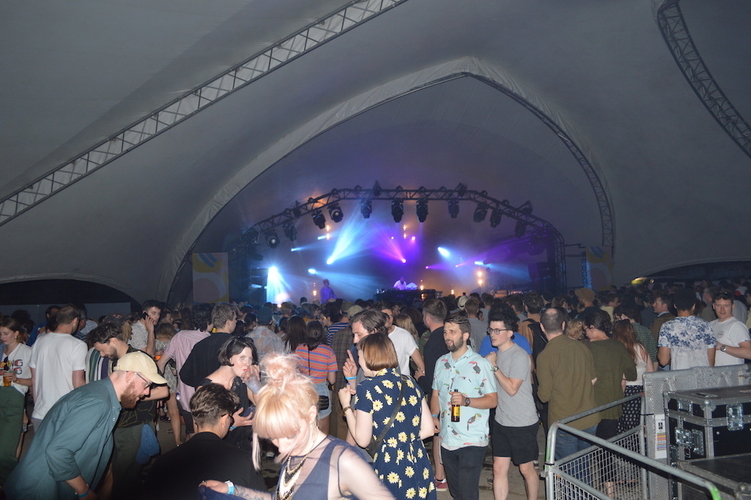 In a crowded festival market, it takes a lot to stand out. Competing with Slam Dunk, All Points East, Radio 1’s Biggest Weekend and more across the country for the Bank Holiday, World Island’s modus operandi to shift tickets seemed simple - put together a stellar billing of the best in hip-hop, R&B, jazz and alternative and let the music do the talking.

Relocated from last year’s event at Leeds Town Hall, we find ourselves in Globe Road car park, thankfully doused in the sort of sunshine normally unheard of in Leeds.

A late shift at the office means we unfortunately miss most of Friday night (doors opened at 4pm), but BadBadNotGood provide a welcome opener. Their brand of super-tight instrumental hip-hop may be a little too chin-strokey for some, but it’s the perfect way to unwind after a busy day, easing yourself into the long weekend.

Friday’s headliner Sampha has a velveteen voice that would soothe even the most fractious of souls. With a set that draws on his Mercury Prize winning record Process, as well as collaborations with Drake and SBTRKT, he knows the value of light and shade: a gorgeous, delicate rendition of Too Much contrasts perfectly with the finale of Blood On Me, with two false endings that keep people firmly within the swell and grasp of his beautiful booming power.

Saturday morning wakes up to a litter of Facebook posts berating the events no-re-entry system so, rather than challenging our dodgy knees to the concrete floor sooner than necessary, we arrive just in time for ELIZA, decked out in full festival attire to deliver a slick set that lures people in to the beer tent. There’s a sound clash from the nearby main stage that prevents her from truly hitting her stride, but - with songs such as Alone And Unafraid and Wasn’t Looking driving a deep, sultry groove - she’s certainly one to watch.

Over on the main stage, Carmody is providing the perfect musical equivalent to complement the heat of the day, a soft breeze to her unassuming choruses of life and love. She doesn’t stay long, but her performance is certainly memorable; be sure to add Singing Your Love to your Spotify playlist.

Franc Moody is the first act of the day to truly get feet moving, offering something that is half millennial-funk, half out and out disco. Pheremones would cause even the stiffest of hips to wiggle and, finally, it feels as if the party penny may have truly dropped.

Masego is here for a good time, not a long time. He knows exactly what the crowd want and gives it to them in spades - a mash up of Snoop Dogg’s Sensual Seduction with Fergie’s Glamorous dedicated to 'all the ladies out there' and an improv loop pedal freestyle that would have Ed Sheeran crying into one of his flannel shirts. Just as you think he might be the most talented person you've only just heard of, he whips out a saxophone and nails a solo with panache - a dream festival act if you ever saw one.

If you're missing 90s R&B in your life, Rina Sawayama is your gal. Along with her two dancers, she delivers a Mariah Carey fantasy that is effortless in its synchronisation, sporting a professional smile despite a malfunctioning mic. Cyber Stockholm Syndrome is a particularly strong closer, melding her retro-pop influences with a keen sense of modern culture. And then there are those leather trousers - only at a festival right?

“I'm a Liverpool fan and I've had a really s*** day, so I'm going to need you to help me turn this around”. With a smile that broad and a demeanor so affable, it’s not difficult to show up for Loyle Carner. Flanked by his band and friends, he put on a stellar show with heart and spirit despite his sporting heartbreak, dedicating songs to his mum and his imaginary little sister with humour and excellent wordplay that makes him out as more of a poet than he perhaps receives credit for.

If the guy standing next to me staring at his own outstretched hands with awe is anything to go buy, the zero tolerance policy may have failed somewhat, but it remains a wholesome end to a solid day of music.

As Sunday gives way to even more sunshine and copious gin and tonics, the jazz-heavy line-up lends itself to more casual listening, but there are still plenty of delights to be had. Moses Boyd makes it clear that he don’t need no band by taking centre stage with him drumkit, proving himself strangely hypnotic despite a highly minimal set-up.

At the other end of the spectrum, Mr Jukes (aka Jack Steadman) has bought all of his friends – a crazily talented band including a singer who completely nails their cover of Lauryn Hill’s Doo Wop (That Thing), rap and all, causing Steadman to beam with pride. Jungle are slick as always, if a little personality-less, while Unknown Mortal Orchestra have buckets of fun; climbing down from the stage to run around the car park as they play, treating us to their unique blend of itchy funk

As the organisers visibly exhale and head to the bar, Giles Peterson closes the festival out, playing an abundance of afrobeat and world music that rewards the last ones standing with a serious dance off. The vibes are good and there is a palpable community spirit, drifting off into the night to chase the official afterparties. 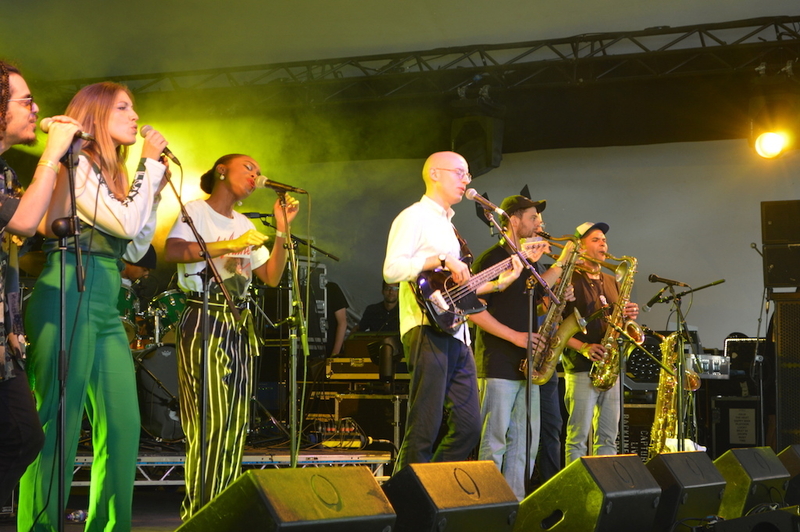 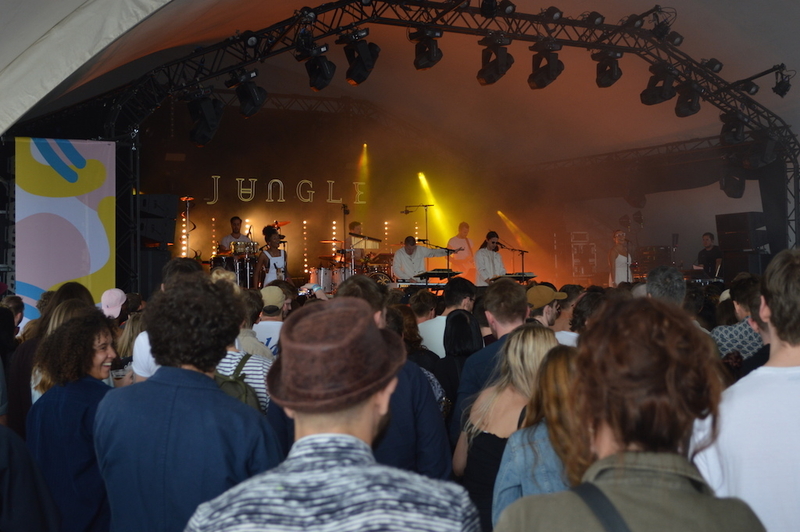 Although World Island can and should be declared a success, it’s not difficult to imagine otherwise had the good-weather gods not been on their side. There is absolutely no faulting the array of excellent performers or the helpful security staff, even the toilet facilities. But for a team responsible for several years of Beacons Festival as well as the running of Headrow House, Belgrave Music Hall and Waterlane Boathouse, there are some serious rookie errors – a distinct lack of signage towards the event, pricey food and drink vendors that regularly run out of stock (especially vegan options) without communicating to long queues of customers and, perhaps most importantly, a severe lack of anything to do that doesn’t involve the band currently playing.

Granted, a festival in a car park was never going to be Glastonbury (and security measures are important) but with a no re-entry rule and minimal seating, it does at times feel as if you are being held hostage inside in the hopes of spending money, resigned to sit on the beer-spattered concrete unless you’re lucky enough to snag one of the few picnic benches. Whether these scrimmages were born out of oversight or budget-squeezing remains to be seen but, going forward in 2019, there are definitely some amends for World Island to make to convince us that they’re putting attendee-experience first. Until then, it seems they’ve done just about enough to keep themselves in the game.