Jenessa Williams picks her best dishes from the first fortnight

WHAT could be better than a festival that offers you a bonafide excuse to ditch the washing up and dine out every night of the week? Coinciding perfectly with the sudden surge in good weather, the first fortnight of Leeds Indie Food has easily been it’s best yet, providing endless amounts of admiration and respect for the small business owners that make our city what it is.

With so many meals in so little time, we figured it was only fair that somebody took on the arduous job of sampling as many dishes in the first two weeks of Leeds Indie Food as possible. A hard life we know, but somebody has to do it. Without further ado, here are six of our very favourite eats from across the festival so far to inspire you ahead of it’s last week.

Where: The Reliance Cooks The Books

What: Legumes a la Greque 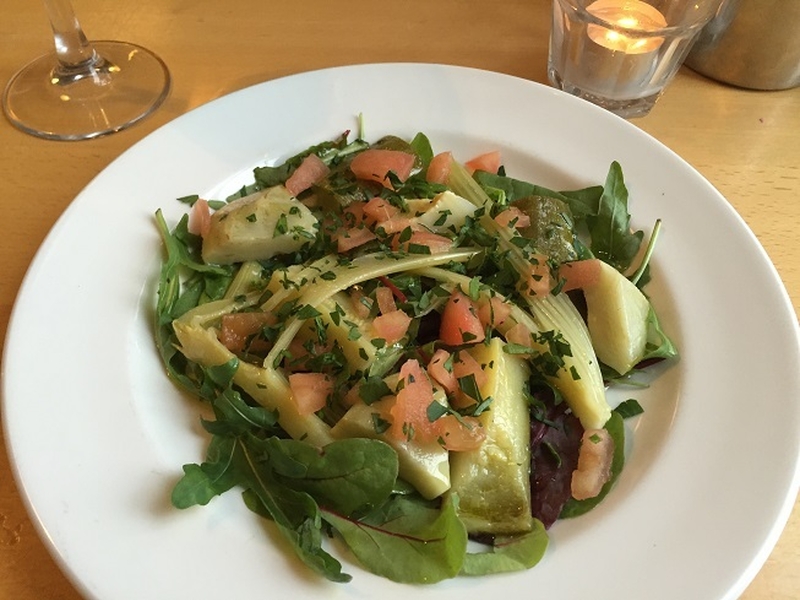 It takes a lot for a salad to truly inspire, but if anybody was going to do it, then The Reliance were always the favourites. As part of their ‘Cooks The Books’ events, they breathed new life into some traditional French dishes, including this little beauty, rich with thyme, bay and coriander seed. Juicy courgettes - normally bland and boring - come alive in the lemon aioli, topped off with the just the right amount of sharpness from the artichoke. My dining partner (aka the fussiest man alive) sneaked a bit off my plate and went back for seconds, proof that salad can be enticing and exciting, especially when it’s done with this much care. 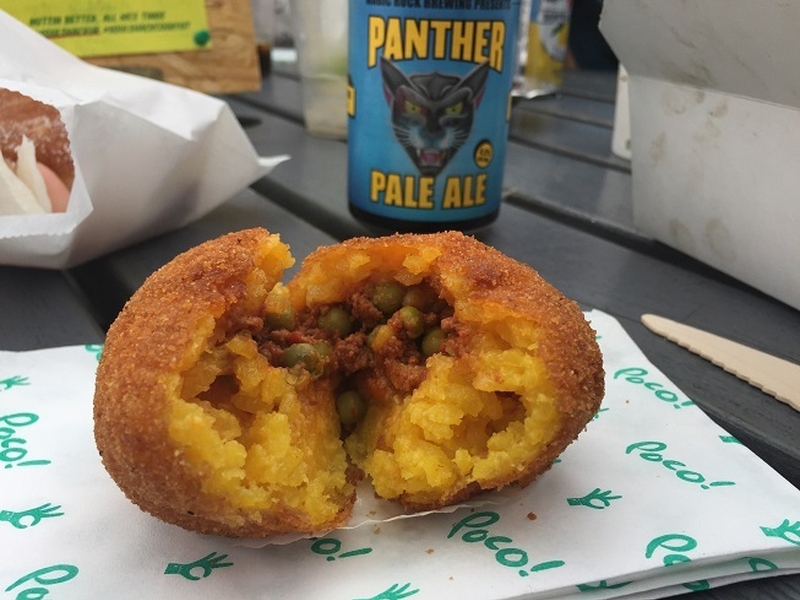 A staple of Leeds eating, the Belgrave Feast is a monthly regular, but boasted some particularly special traders for Leeds Indie Food. An honourable mention goes to Soul Shack for their flavoursome jerk chicken with rice and peas, but the real meaty MVP of the day was an arancini ball from Poco Sicilian.

Roughly the size and weight of a cricket ball, the sticky, mouth-watering rice concealed a particularly hearty bolognese centre, made with a sauce so full of fresh tomato that it would be hard to imagine getting anything better outside of Italy. Stick three of these on a kebab stick and roll me home – this is exactly the sort of food they should be serving at festivals nationwide.

What: Lemon and raspberry meringue 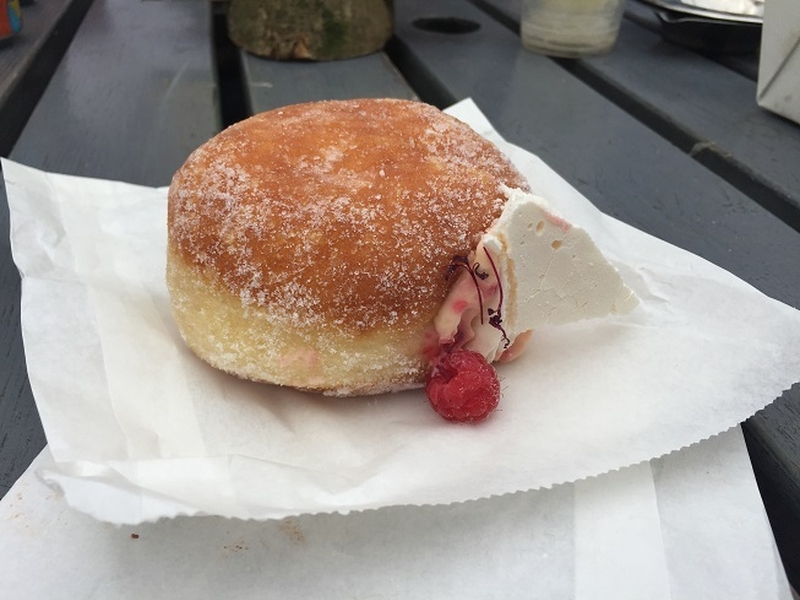 Much as churros and cake pops before it, it appears that doughnuts are having something of a moment. Appearing frequently across the LIF menu, Eve’s stands out as the best quality bake across the event, and in fact, it is no hyberbole to say that it might be the tastiest doughnut we’ve ever had. A deceptively light dough, we are shaken by the sheer density of it as we lift it to our lips - more cream than we thought possible explodes in a rush of flavour that seemingly contradicts the lightness of its vessel.

Vaguely pornographic descriptions aside, the finishing touch is the fresh raspberries in the centre, offering it a touch of elegance that transcends the humble donut. Definitely worth keeping an eye out for at future events.

Where: Taco Tuesday at Laynes Espresso 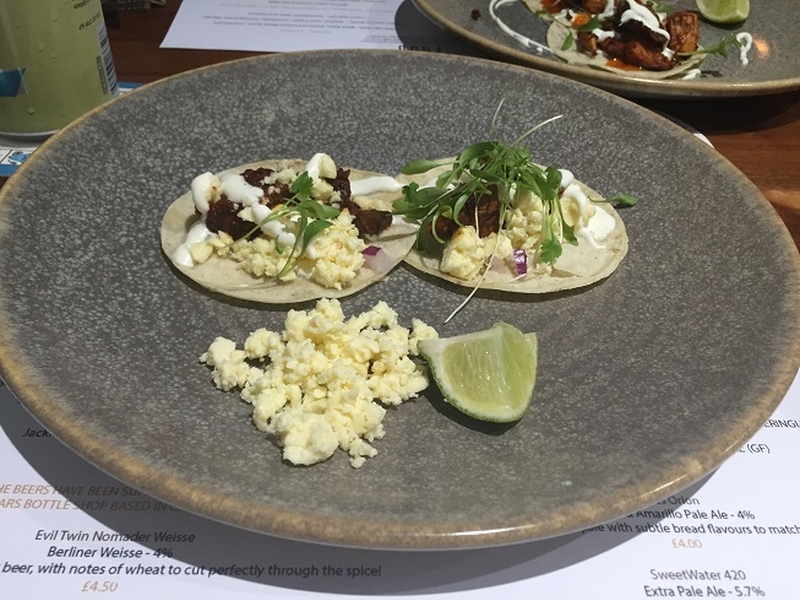 Giving the resident Laynes chefs a day off, Taco Tuesday was a welcome takeover on a day where the particularly hot weather lent itself merrily to light bites and beer pairings. Despite a few teething issues with slow service, the mushroom tacos proved well worth the wait. Served with adobo, chipotle, coriander, lime and the inspired use of some crumbled Lancashire cheese, even the biggest of carnivores would have struggled to miss the meat.

Packing quite a punch for such a small plate, the dish paired excellently with a side of mango and pomegranate nachos, and a new drink discovery in the form of North Brewing Co’s Vespertine - a hibiscus and red berry sour with just the right note of sweetness.

Where: The Blue Caribou Poutine at Foodenell

What: Salmon and hollandaise poutine 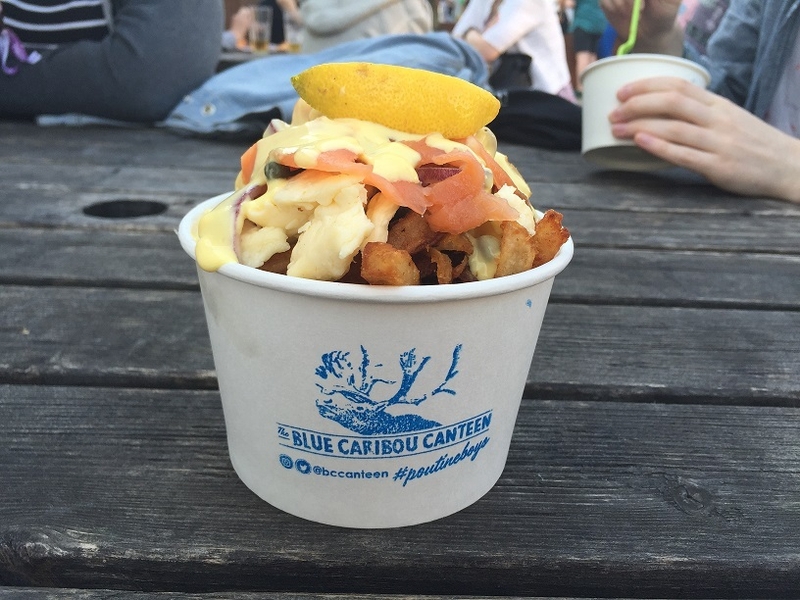 A classic Canadian dish, poutine is traditionally served with gravy, meat and cheese curds – delicious but usually pretty stodgy. Subverting this for a very millennial crowd, Blue Caribou's salmon poutine served at The Brudenell Social Club's ‘Foodenell’ event (see what they did there) is a marvel of subtlety, taking breakfast food and merging it with festival grub to create something quite special indeed. Their vegan version of cheese curds are a nice touch, as are the capers and strips of red onion that season the dish. It may not be the most aesthetically pleasing, but it sure is tasty. 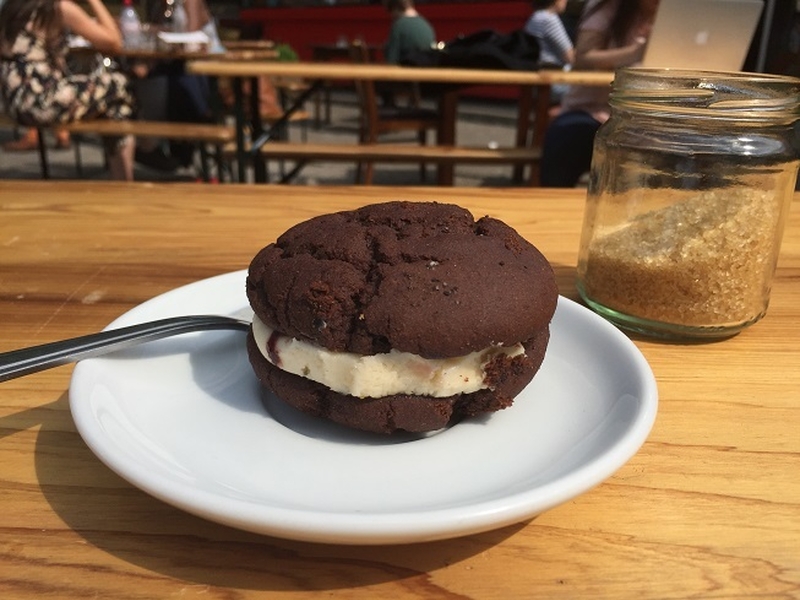 After a late night at Foodenell, we found ourselves sadly missing out on Hyde Park Book Club and The Junk Food Project's Ramen Pop-Up, designed to reuse produce that would otherwise get binned. Unfortunately for us, their Marmite and mushroom concoction was a little too popular, and they sold out long before the event was advertised to close. Good thing the Junk Food supermarket remains open until the 28th May for us to get our fix of ethical eats.

Still, we’re lucky enough to find that Hyde Park has it’s own selection of delicious baked goods, so we drown our sorrows in sugar with their gluten free, vegan whoopee pie – full of black forest jam and 'cream', my slightly sore head is very grateful for the carb hit. Best of all, these treats are available all year round.

Our top picks of events still to come...

Sample Ox Club, Bundobust and The Reliance’s takes on the humble scotch egg, available daily right up to 28th.

You’ll likely have seen the ice-cream cone topped with a mini doughnut all over instagram, but try out the pairing for yourself at Temple Coffee & Dougnuts between now and the end of the fest. 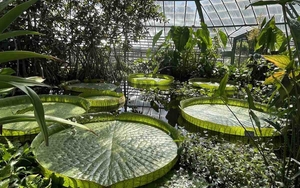