We speak to frontman Rou Reynolds, ahead of this month's headline slot at Slam Dunk festival

Enter Shikari’s history has long been intertwined with Slam Dunk Festival, the pop-punk pageant that began as a modest one-dayer and now boasts multiple venues in three separate locations – Leeds, Hatfield and Birmingham.

“Hatfield is right next to St Albans where we’re from, so I’ve been a few times,” notes 31-year-old frontman Rou Reynolds. “We DJ-ed at the festival back in 2006 or 2007, it was definitely its first year or close to it. That was fun, just in one of the sidebars, a little DJ set.

“I’ve gone a few times as a punter because it was on my doorstep. Hatfield was the uni I went to, albeit briefly.” Now, more than a decade on from their Slam Dunk debut, the group are now preparing to headline it.

The festival’s popularity and eclecticism has grown in parallel with Reynolds’ band, whose music embraces punk, hardcore and various strands of electronica including drum and bass, dubstep, techno and trance. “Every year it just goes from strength to strength, it’s a really cool festival,” he says.

In 2016 Reynolds and bandmates Chris Batten, Rob Rolfe and Rory Clewlow topped the Uprawr DJ stage at Slam Dunk in their alternative guise as Shikari Sound System. “It’s just a bit of fun on the side,” says Reynolds.  “It’s us just DJ-ing so it’s predominantly centred around drum and bass and then we chuck all sorts of other stuff in, original tracks and remixes.

“There’s not the energy and the passion and everything that Shikari is about – all that grandiose stuff. It’s just playing some tunes and having some fun.”

The band’s roots go back to their teenage years. In 1999 they comprised a trio – of Reynolds, then on guitar, Batten on bass and Rolfe on drums – and were known as Hybryd. “That was a completely different thing, that was just three of us from when we were 14 to 16 years old,” Reynolds recalls. “We had a few different bands and sounds in that era; that one was alternative progressive rock or something – it kind of sounded like Muse in their early days.

“Then when we were about 17 we picked up Rory and I stopped playing guitar and concentrated on electronics, and Shikari began. We put out two EPs before the first album. They had no official release. It was just us recording in a garage, making CDs in a basement then selling them at shows. There’s not many of them about these days.”

Things changed significantly for Enter Shikari when they made their first album, Take To The Skies, in 2007. Reynolds remembers: “It was the first time we had been in a proper studio. We did it in Outhouse in Reading and it felt like ‘Wow’, it was a shock being treated like a real band. It’s only a small studio but a lot of the local bands that we really looked up to recorded there and it definitely felt like a step up.

“It was in a bungalow in John Mitchell’s garden. Crazily we did it in two weeks – I still have no idea how we did that. All the songs were written, I guess, and we’d been playing them live for years so there was no need to write in the studio or experiment too much. It was just ‘get in and get out, get the tunes down’ and that that’s what we did.”

When the album subsequently entered the UK charts at Number Four – without the help of a record label – it felt like a major achievement.

We had a ‘we don’t give a f*** about the charts’ mentality, but what it represented – that people were interested in the music and they were buying the records – it was crazy.

“It felt like a celebration for the whole scene, really, that music that was so far from the middle of the road and was DIY could break through to the mainstream, it was a real success,” says Reynolds. “It’s very surreal looking back but at the same time I think we also had a ‘we don’t give a f*** about the charts’ mentality, but what it represented – that people were interested in the music and they were buying the records – it was crazy.”

A couple of months after the album’s release, the band headed off to the USA. That tour was to be the beginning of a strong relationship with an American audience who have supported them through 22 subsequent visits. “We’ve certainly done a lot more tours over there than a lot of other bands,” says Reynolds. “I think some of them get disheartened pretty quickly and give up on it, which is very tempting – it’s a real tough slog, it’s big country, so to do it properly you’ve got to be over there for seven or eight weeks and it’s really difficult.

“We’re still not as big out there as anywhere else that we’ve toured but we’ve built up a real solid, dedicated, passionate fanbase, and now I look forward to going back there even though we are playing smaller venues. We’ve made so many friends out there and there are so many scenes and cities. People appreciate us coming and we look forward to going back and playing to them.”

To this day, the band remains defiantly independent. They run their own label, Ambush Reality, releasing records under their own steam and playing major festivals throughout Europe and beyond. In 2012 they hooked up with the east London brewery Signature Brew to launch their own beer, Sssnakepit – named after one of their songs.

“They are a small independent brewery who are fans of the band,” explains Reynolds. “We hung out with them for a few days and did lots of tasting sessions and got into the science of how it was made, ingredients and our taste preferences. We came up with a beer that suited all of us and that the guys at the brewery were happy to make. It was a really interesting experience.”

Reynolds also has his own ethical clothes label, Step Up Clothing. He launched it because he was “fed up with that was on offer” elsewhere.

“If you wanted clothes that weren’t made in sweatshops you’d have to go to small independents. It’s not so bad now, but 10 years ago when I started it they were really expensive. A lot of things when it comes down to consumer choice and wanting to bring politics into it you can only be as socially conscious as you wallet will allow, whether you’re buying organic food or carbon neutral clothing, a lot of the time it is just more expensive. If you come from a working class background you don’t really have a choice, you can’t vote with your wallet, so it’s really frustrating.

“I just wanted to try to make simple bits of clothing that aren’t plastered with a brand that is meaningless. I didn’t want to support any of the brands that I’d grown up with in school, seeing what they did in terms of cliques – the typical thing if you didn’t have the right shoes or your tracksuit bottoms only had two stripes instead of three then you get bullied and all that s***, it was really a decision to fight against that clique mindset.”

Enter Shikari play at Slam Dunk Festival in Leeds on Sunday 28 May. For the full festival line-up and venues visit: http://slamdunkmusic.com/ 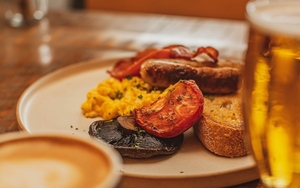