Homelessness in Leeds: is the council doing enough to help?

Jon Howe looks at the council's shortcomings, and the organisations picking up their slack.

We see them, but we don’t want to see them. Or maybe we just see through them?

The cardboard boxes, damp and dirty sleeping bags, hand-scrawled signs and the lines of people queuing outside mid-week soup kitchens are the visible signs of homelessness in Leeds.

What we don’t see is the procession of people constantly on the move; hopping from one mate’s sofa to another, calling in one last favour, the squatters in a derelict shell of a building, the hospitalised and those that family are taking pity on one final time. They are all homeless and they skew the statistics.

Of course everybody has a different story - they range dramatically from the most heart-warming to the most harrowing you will ever hear - and everybody has different circumstances. The homeless are like a magnet to the most judgemental people we share our city with, those who won’t stop to talk to them for fear of learning what their actual story is - often a combination of relationship breakdowns, loss of employment, family bereavements or chronic ill health; essentially a downward spiral of unforeseen body blows which experienced individually would test the fortitude of anyone blessed with a regular support network.

The obvious question is ‘who is looking out for these people then?’ And the heartening answer is that as far as the city of Leeds is concerned, there’s a hell of a lot.

The obvious question is ‘who is looking out for these people then?’ And the heartening answer is that as far as the city of Leeds is concerned, there’s a hell of a lot.

It may seem to some that there isn’t a great homeless problem in Leeds - one is too many, of course - because there is a network of people and organisations going way above and beyond to ensure those numbers show a more favourable situation. Not because they want to make Leeds City Council feel better about themselves and hit targets, but to respond to the very basic human need of an entitlement to warmth, food and safety.

Emmaus is a non-profit homeless charity offering shelter to those who needs it, and offering meaningful work as part of various social enterprises. St George’s Crypt has been helping the homeless of Leeds since 1930, as ‘24/7 angels’ who won’t turn anyone away.

They have a link project with local hospitals to ensure people discharging themselves don’t end up on the streets, and they have a detailed register so that people can be traced and their history recorded.

Simon on the Streets is another organisation that works on the front line, with street-based emotional and practical support for people in Leeds, Bradford and Huddersfield. In addition, the arts and creative sector and various educational institutions support the homeless and the volunteers in the organisations mentioned above.

Elsewhere, the Homeless Leeds Support Group receives donations of out-of-date food from Greggs, Tescos and Morrisons and puts it towards a thrice-weekly pop-up street kitchen in City Square, building on Leeds’s love of street food but putting it to a great cause, via 30-40 volunteers who also run two night kitchens in the city centre.

However, the one body that has an inherent duty of care to the people of its borough, Leeds City Council, is conspicuously absent from discussions so far.

The local authority has fended off the barbed condemnation of its efforts to support the homeless by claiming it is “absolutely committed” to helping the vulnerable people of Leeds, and adopts a “collaborative approach” by working closely with all organisations.

The council’s website explains that it will do everything it can to resolve housing problems, but also rather coldly explains that “…we are legally bound to make further enquiries to determine what duty we owe you if we believe you are homeless or at risk of becoming homeless”. This is at least where background checks and investigation can substantiate someone’s very real circumstances, and where, conversely, the act of a by-passer kicking over a cup of loose change, stealing sleeping bags or even setting fire to tents, doesn’t carry such structured justification.

But the council’s approach is very much geared towards offering temporary housing, an application which in itself can take up to 33 days to resolve. In August 2016 a march organised by the ‘Leeds Homeless Partnership’ claimed that the council’s outreach team wasn’t doing enough to recognise Leeds’s homeless problem and identify what the different groups were doing to help.

Shortly after this, in September, the ‘Tent City’ protest took place, with around 50 homeless people pitching tents and sleeping together to make their plight and their argument for more council support more visible. The council responded by moving them from outside the art gallery to Park Square, because the city’s Olympic parade was about to take place, neatly illustrating the disparity in the city, and LCC’s priorities.

On a more practical level, the council does carry out a ‘Street Sweep’ three times a week to find street sleepers and offer them a bed. Of course not all of them are identified and found, and not all of them accept the offer. This succinctly highlights the burning issue; that a temporary home is just a temporary solution and even those seemingly on death’s doorstep, and with literally no alternative options to consider can recognise that. 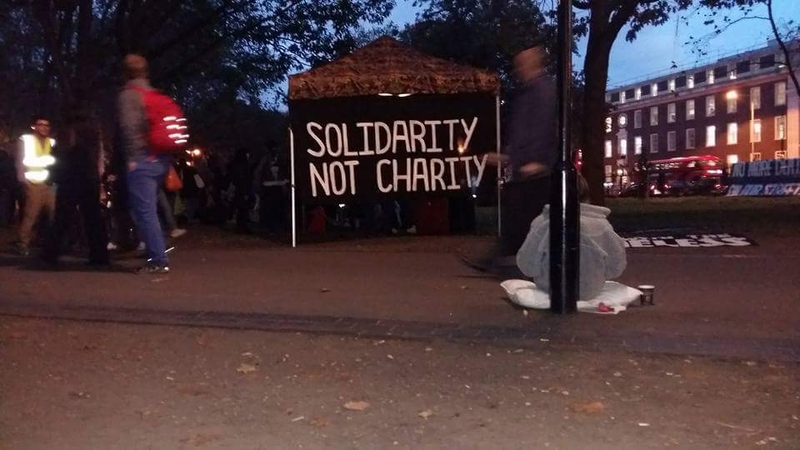 The homeless problem of Leeds will not be solved at a stroke, but what it needs is long term solutions. Sleeping rough is a lawless and perilous existence, with every second spent in fear and discomfort. Quite apart from the open abuse of members of the public, homelessness can be a competitive business, with newcomers being warned off somebody’s ‘patch’, often violently. But there is also a sense of community out on the cold, unforgiving concrete of Leeds, and for many that feels much safer than a bed for the night and having to self-consciously interact with strangers they don’t trust.

What many homeless people need more than anything is to talk; to be shown respect, tolerance and empathy, for their self-esteem to be improved and for positive changes to be introduced to their lives. This comes from the selfless dedication of the support groups in Leeds. Often this is received for the first time in someone’s life, and prompts an outpouring of emotion.

What the homeless people of Leeds need a path creating where they can see a future, and where a frame of mind is created that welcomes this intervention.

A bed for the night doesn’t solve ongoing mental and physical health problems. That needs a structure where trust is built and help can be accepted because a future can be seen. Perhaps Leeds City Council needs to ask itself if that future is something they can offer. Or are there organisations better qualified who themselves need funding and support?  Jon Howe