It’s written in the scriptures that whenever a former Masterchef contestant opens a new establishment their appearance on said programme must be referenced in all subsequent reviews. Forde, then, is the latest restaurant brought to you by former Masterchef finalist Matt Healy, following the pandemic-enforced closure of The Foundry over in Holbeck.

Out in the Horsforth suburbs, Forde is a smaller spot than The Foundry but no less dapper. Here, an original wooden beam, there a flourish of exposed venting, it’s cosy with a hint of industrial.

Teetering in those happy hinterlands where solid becomes soup

I’m sure that somebody somewhere has determined when the official brunch-to-lunch cut-off time is meant to be, but there’ll be none of those rigid formalities here, thanks very much. From a compact menu that speaks of unabashed comfort, the early afternoon offerings when we arrive are still of a morning-after persuasion.

With its shakshuka and crispy potatoes, its cheese rarebit crumpet, and its seductively sounding (but sadly unavailable) boudin noir and chorizo scotch egg, it’s certainly a menu that talks the talk. Especially to those who may be delicate of head.

Our opener is a hefty cheese and beans toasted sandwich (£7.50). It brings to mind the ballsy neon sign emblazoned above the pass at Healy’s old place which promised diners that what they were about to chuck down their necks would be “Food To Swear By”. On the whole, it’s a sentiment that still stands, but in the case of the toastie, the expletive of choice has to be “where’s the fucking cheese?”, for it is light on the fromage.

Cheese-based shortcomings aside, however, it’s a carb-carnival of a thing. A bready bruiser with a background hum of chipotle to get the engines if not exactly firing then certainly warmed through and rumbling.

Happily, there’s no paucity of chorizo in the deep red bowl of hash (£9) we get busy with next. Plentiful wodges of the stuff bob about in a thick sauce alongside chunks of (almost) virtuous skin-on sweet potato, a component that too often has the capacity to be a dispiriting let-down but here has been roasted with merciful finesse.

The sauce needs bread. All sauce needs bread, especially one which has been supplemented by the burst yolk of a crispy fried egg. Ever resourceful, remnants of the toastie are deployed to scoop and mop.

Teetering in those happy hinterlands where solid becomes soup, the chicken and leek stew of the day (£10) is probably as good as a bowl of stew can get. Bold, yes, but true. There are no dry or drab lumps of meat to contend with here. Instead, silky strands of the bird tangle with slender ribbons of leek and other nubs of vegetable to create a homogenous mass of fortifying nourishment.

With its shimmering hue of pearlescent dairy, an accompanying pile of mash sits somewhere between the fancy butter-laden stuff that gets TV chefs strangely excitable, and some classic school-dinner stodge. It’s where Michelin meets greasy spoon and it’s a tenner very well spent.

All of what we eat comes out of a tight little kitchen, manned by a single person on this visit, at one end of a well-stocked bar. Evening menus appear to be slightly broader, and word on the well-heeled streets of Horsforth is that the Sunday dinners are better than yours.

Ever alert to the intricate dynamics of restaurant service, or simply by being what many would call a nosy git, I earwig in on a conversation during which a group is apologetically turned away due to the restaurant being fully booked. That’s not bad going for lunchtime and Forde has evidently got the locals loved-up.

Healy, the fella who once made the finals of Masterchef, may just have landed a winner. 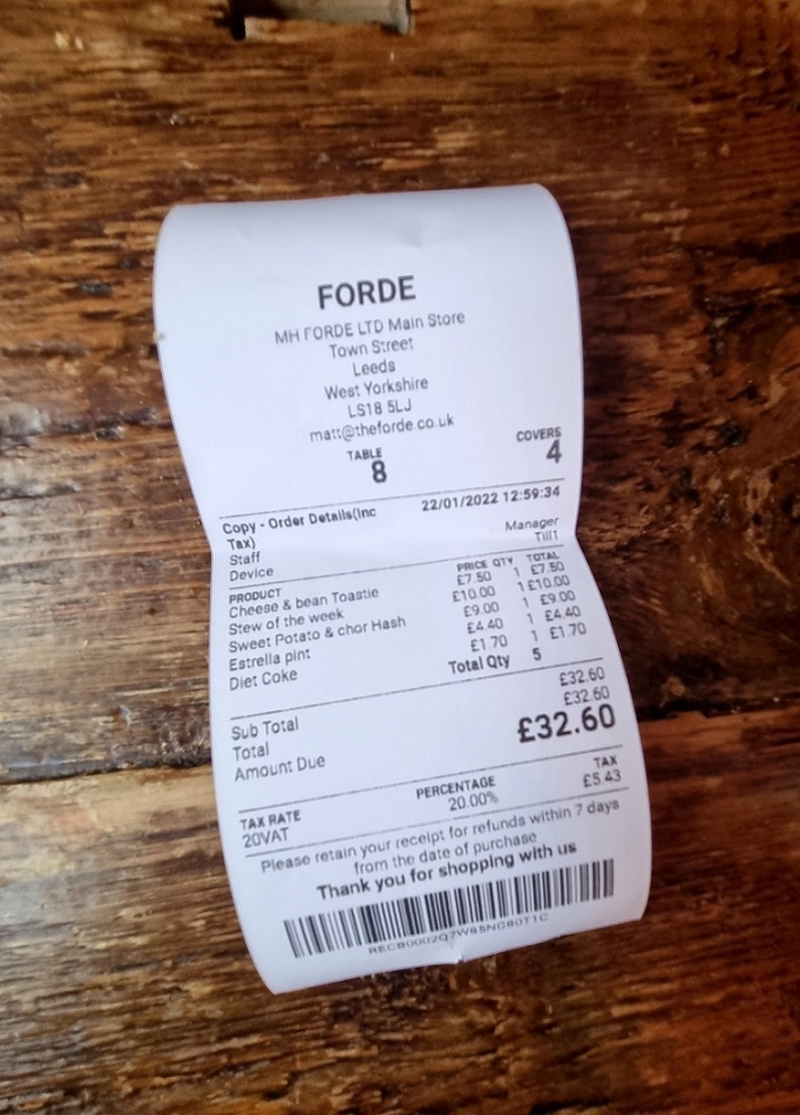