If Rob Green is nervous about opening for Earth, Wind & Fire, he shows it only in immense gratitude. A young Nottingham lad, his talent for instantly likeable soulful R&B crosses easily between light and dark. Cheeky number Headstrong follows the same lyrical narrative of Ed Sheeran's Sing, with more sass and swagger, while Blue is a touching ode to mental health that clearly means a lot to its performer.

It’s his closer that’s really special though, a mashup that most buskers would take serious notes on – Something Inside So Strong into I Need A Dollar (improvised with lyrics that detail his social media handles) via I Will Survive, The Fresh Prince theme tune and noughties classic Lady (Hear Me Tonight). He leaves to fair applause and a pretty full arena, no mean feat considering the temptation of a cool pint from the bar on an evening this warm. 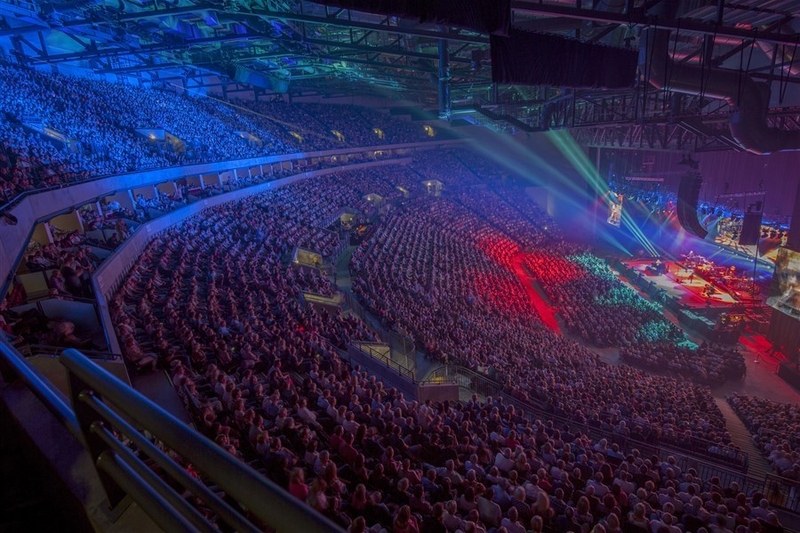 There is no dismissing the power of tonight’s headline act. Despite a whopping 45 years in the business, the energy and exuberance that emanates from the three original members of Earth, Wind & Fire’s stage arrival is that of eager first-timers, arms spread wide as they invite 'Leeds, Inger-land!' to clap their hands to the opening strains of Sing a Song. Flanked by a full band and some newer colleagues, performers old and young are indistinguishable from one another, perfectly in step with chic, stylish choreography.

Whether it’s the heat of the day, midweek fatigue or the (predominately over-50) audience taking a little longer to warm up, it's up to Phillip Bailey to rally them to cheer, clap and holler along with his ‘amens’ and ‘oh yeahs’.

Luscious solos from the ludicrously talented brass and percussion sections

Still, if the band is peeved by the seeming apathy of their audience, it doesn’t influence their effort; getting low in their glittery trousers to Jupiter, and revelling into luscious solos from the ludicrously talented brass and percussion sections. Got To Get You Into My Life finally sees bums rise off seats, staying upright to sway along to Devotion (pricking the ears of the few young attendees in the crowd thanks to its recent sample in Drake & Kanye’s Glow) and, of course, Reason; complete with outrageous dolphin-like high notes from Bailey that emanate deep from his body like a divine, funky spirit intervention.

As far as closers go, you can try and name a better trio than Boogie Wonderland, Let’s Groove and September, but you might be waiting a while. Sounding as fresh as they ever did, it’s mind-boggling to think of the amount of weddings, parties and celebrations these songs have soundtracked, and how many more generations they will influence. Wrapped up neatly by 10pm, Earth, Wind & Fire came, conquered and caroused: proof that if you truly find something you love doing, no increasing age can hold you back.