NEVER mind about the food, getting yourself into Crafthouse is something of an event in itself. First, there’s the elevator ride that hoiks you up the side of the Trinity shopping centre. Behold those majestic views over Boar Lane. Then, once you’ve disembarked, there’s the moodily lit corridor to guide you to the entrance proper.

Yes, the foreplay’s all very seductive, so it’s a bit of an anti-climax when I discover that, other than a late-lunching couple who’ve just hit dessert, there’s only me in the place. And that’s a shame, partly because it means there’ll be no conversations for me to nosey in on, but mainly because former-MasterCheffer and ex-Horto chief Murray Wilson, who took up the Crafthouse reins in the summer, is banging out the good stuff and more folk should know about it.

A slab of charred mackerel (£10.95) is, for example, a peach of an opener. Whether he meant it or not I interpret the fish-on-toast combination as a riff on the classic childhood Sunday supper, where the tinned fillets, in their overly sweetened tomato sauce, would be spread onto cheap bread and then bunged under the grill until burnt, to be scoffed in front of London’s Burning.

Here, the fish may be vividly fresh and from the sea, rather than preserved and from the tin, but I’m glad to report that the slice of bread it arrives on remains of the same cheapo supermarket variety from back in ye olde days. As it should. The sauce, though - a long-cooked and deeply flavoured tomato and olive jam - is a welcome upgrade, and there’s some meaningful heat, too, from a smattering of meaty shrimps in an XO glaze. Other than adding a level of crunch, the green cornflake things taste of, erm, cornflakes, and are an addition I don’t recall from the days of yore. Cornflake curveball aside, I’m well into this.

Until now my life has been devoid of mallard (£23), but I have seen the light, and it is the colour of late autumn and of wild duck cooked medium rare. My two slices of bird have a rugged texture that, as with a good steak, requires the eater to put the effort in. Funky and beefy, with a top note of iron tang, it’s worth the jaw work. My only quibble is that, for the price, it might be nice to have a bit more of it.

The supporting bits and bobs have been equally well looked after. Between them, a puck of sweet, earthy beetroot and a couple of lightly pickled girolles bring out the best in the meat. The sauce, stickily reduced and with a hint of warming spice running throughout, sings of the season and marries the whole lot together. And yes, I have saved a lump of bread - a warm, unflashy roll - to dredge through it. Of course I have. I finish the plate and am in half a mind to ask for the same again.

By now I’ve seen enough to know that the kitchen at Crafthouse can do the clever and the concise, but in a crème brulee (£7.50) I note that it can knock out the classics, too. The whiff of bronzed sugar comes first, followed by that crowd-pleasing snap and scoop of spoon shattering through taut caramel glaze and loading up with thick custard filling. No faff, no fuss, just an old-timer done properly.

As I’m settling my bill, a large party arrives. I’m pleased for the front-of-house team, who’ll now have something to do other than fill my glass with water. But mainly I’m pleased that it’s not just me who gets to enjoy such slick and satisfying cooking tonight. 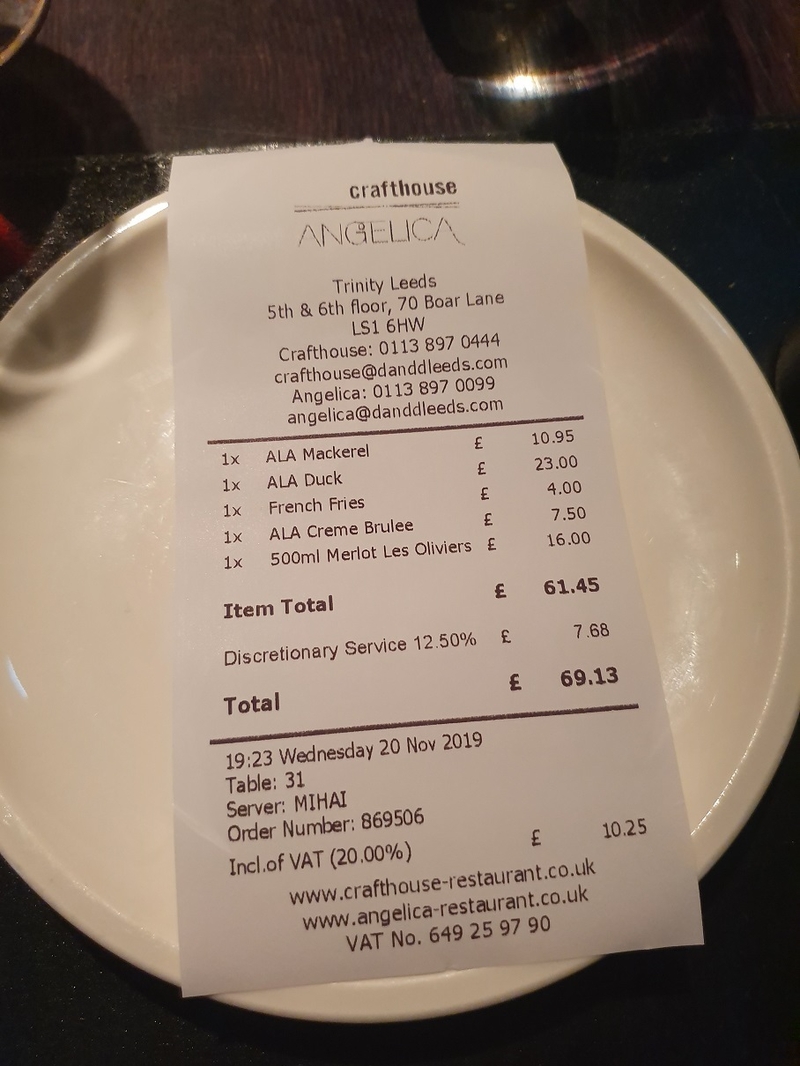