Both the broadcaster and the city have always challenged the accepted norm, says Jon Howe

When you see Leeds putting forward a bid as the location for the new headquarters of Channel 4, there’s an element of fear, and a tendency to think that the city will pretty much put itself forward for anything.

With the scars still healing from the very public retraction of the 2023 European Capital of Culture bid, those more solicitous observers may have thrown their protective arms around the city’s exposed shoulders and warned against another intrepid step into the arena of a potential high profile rebuff.

Except that when you analyse the case that Leeds has put forward, it is not just ‘compelling’ but a further example of the city’s emboldened and confident resurgence and a new found determination to follow its righteous path.

October 1st is the date on which Channel 4 will announce the location of its new national headquarters. Currently this is down to a shortlist of just three: Leeds, Manchester or Birmingham, after Liverpool, Glasgow, Cardiff and Bristol were ruled out on Monday. The original shortlist was announced on May 30th and left a number of cities disappointed from an original list of 30 submitted bids.

There was something of a consolation for some of those cut from the list on Monday, however, as along with the cities vying for the national headquarters prize, three other cities – Bristol, Cardiff and Glasgow - are in the running for the hosting of two ‘cultural hubs’. These will support the headquarters, which will operate alongside Channel 4’s existing London base, but will be rewarded with an annual spend on programming rising from £169million to £350million by 2023.

Somehow it seems inconceivable that Leeds won’t be awarded one of the three prizes on offer to the six remaining contestants, but then of course we would be slightly biased in that. But certainly, the “compelling cocktail” described by Leeds City Region chair Roger Marsh, is a rich tapestry of existing cultural heritage, an insatiable present day appetite for innovation and the promise of a young population displaying talent, imagination and leadership.

The Leeds bid for the national headquarters quoted a perceived regional “imbalance in creative sector investment”, which could be seen as a legitimate factor or a cheap swipe fuelled by bitterness and paranoia. The very fact that Channel 4 are taking a leap of faith outside the capital renders part of that argument meaningless, but certainly the power and influence seen in the blossoming regeneration around Manchester’s Media City, could legitimately impel members of the selection committee to imagine a similar catalyst for growth a few miles eastwards.

Liverpool could have similar claims, and it is hard to gauge how seriously the mainstream cultural media view the term ‘northern powerhouse’, but given it was a Conservative Party manifesto pledge that initiated Channel 4’s move, there is some weight in the argument that a northern base might be favoured.

Publicly owned Channel 4 was initially reluctant to move from its Victoria base, but is now rallying around a ‘4 All The UK’ slogan and is committed to moving 300 permanent staff and around 3,000 production jobs to a new location “by 2019”, a rather bold pledge given the October 1st announcement.

Nevertheless, Leeds is ready, and while it can’t be expected that the city’s bid will be leant a sympathetic ear in the light of the Brexit shambles that put paid to countless hours slaved over towards the City of Culture proposal, the failed 2023 venture does still highlight a wealth of valid cultural minds and faculties and an infrastructure primed for accommodating creative excellence on a grand scale.

Leeds appears to be there on a plate. But of course it isn’t that simple

Quite apart from the surfeit of theatre, music, ballet, art and photography talent in the city, Leeds has a TV presence and heritage already. BBC North was located in Leeds from 1968 until 2004, when it became BBC Yorkshire and is now housed in a plush new building deep in the city’s most concentrated cultural area. And of course Yorkshire Television transmitted programmes from its Kirkstall Road studios from 1968 until its 2007 demise, and the surviving five acre site is now largely a mecca for lovers of Emmerdale.

But beyond argument is the fact that Leeds has universities producing smart kids leading the way in innovative cultural thinking, and the city harnesses the biggest concentration of digital expertise in the north, which already supports 70,000 jobs and pumps billions into the economy, while housing organisations such as Sky, NHS Digital, Branded3 and AQL.

In every sense, Leeds is diverse, challenging and energetic. It promotes a talent pool pioneering new technologies, and mixes leisure and retail excellence with housing affordability. Add to that an established and thriving cultural quarter and an ambitious South Bank Development that could easily accommodate Channel 4’s vision for expansion, and Leeds appears to be there on a plate. But of course it isn’t that simple.

Every competing city will put forward equally persuasive arguments and enchanting promises, and these will all be heard in a second round of the selection process, with Channel 4 visiting each bid city/region and holding a Q&A session after a presentation.

For once Leeds is accepting the not inconsiderable support from neighbouring cities, as Sheffield City Region Mayor Dan Jarvis expressed disappointment in his own bid succeeding only in running for the cultural hub award, but then, perhaps through gritted teeth, placing his support behind Leeds’s bid for the national headquarters.

Putting years or parochial acrimony and obsessional rancour to one side, Sheffield has seen sense in it standing a better chance of receiving second prize if Leeds gets the first, and that kind of collaborative thinking can only help in bringing Channel 4 to Yorkshire.

Perhaps the biggest factor in Leeds’s favour is in the very essence of Channel 4 itself; as an ‘always edgy’ purveyor of boundary pushing virtuosity. If Leeds is anything it is the eternal outsider doing things its own way, detached from the accepted ‘northern elite’ of Manchester and Liverpool and carrying an unsettling ability to always surprise and always innovate.

In its near 36-year existence from The Tube’s genre-defining, “groovy fuckers” anarchy and Brookside’s open socialist values and lesbian kisses, to the carefree chaos of The Word and Big Breakfast, Channel 4 has surfed brazenly on the edge of acceptability. Even today, shows like Gogglebox, Embarrassing Bodies and Who Is America challenge an audience to laugh or cry.

So the channel that championed alternative comedy in the 1980s and alternative sports such as American Football, Italian football and, erm, Late Night Poker, should embrace the opportunity to take a stride into the welcoming bosom of a city that has always advocated an alternative to the norm. Away from the uniform sheen of endless office developments, high-brow shopping and fine dining, Leeds still has an insatiable core that feeds on lateral thinking and challenging posture, and with city-wide support from the people who can make a difference, Channel 4 might just find a home here.

Stocking up: Leeds festive markets 2021
What you say
Read Next
● / News 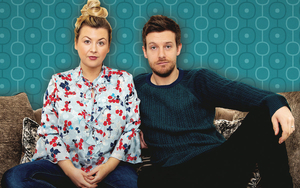