With Italian food dominating the chain restaurant industry, so it’s a statistical probability that when celebrity chefs decide to go down the road of franchising their name and reputations out to eateries, the restaurants will happen to be Italian. Sometimes it’s with good reason, such as being from Italy, and sometimes with a more tacked-on affiliation like they’ve got an Italian Mum or mate.

Jamie’s Italian (oh no he isn’t!) on Park Row has been attracting the masses for years now, with their pasta, pizzas, and ‘Famous Planks’ (sharing boards - not Jamie and Gennaro), but two other chef-endorsed Italian chains have popped up in Leeds.

First was Gino D’Acampo, who decided to open up Gino D'Acampo's My Restaurant over the road from Jamie in late 2016, prompting many people (me) to expect a good old fashioned mafia turf-war (it did not materialise.) Next up, according to his press release, Leeds lad Marco Pierre White couldn’t wait to open a restaurant in his hometown - just as soon as he’d opened about a dozen others around the country. Marco's New York Italian launched on the ground floor of the new Ibis Styles hotel on Wade Lane in April 2017.

But are any of them any good? We went to all of them to do a like-for-like comparison of dishes that form the benchmark of Italian cuisine, to see which celebrity chef is a majestic Ferrari stallion, and which one’s a clapped-out Fiat Panda:

More a test of ability to source great produce than the kitchen’s prowess, but it’s still telling to see what attention to detail each restaurant does with something so simple.

Jamie’s “World’s Best Olives” (£3.95) are the ones that started my love affair with the things, back in the day; all bright green and buttery. A couple are either bruised or not particularly firm, but that’s more than made up for by the accompanying sun-dried tomato tapenade and carte di musica crispbread.

Less hyperbolic are “Marco’s Quality Olives” (£3.75) - decent, melony ones with a scattering of unwelcome kalamatas. Most humbly-titled are Gino’s “Olives” (£4) - great big zeppelins advertised as having a sweet, juicy flavour, but ultimately overpowered by garlic oil. 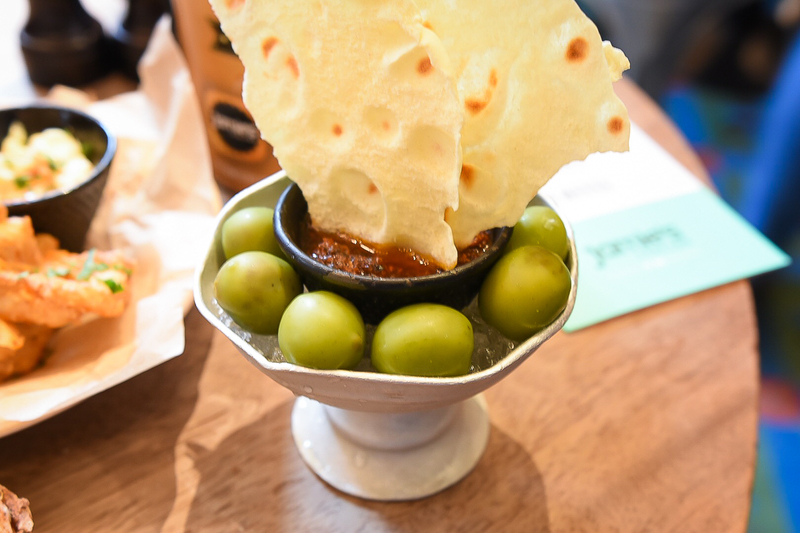 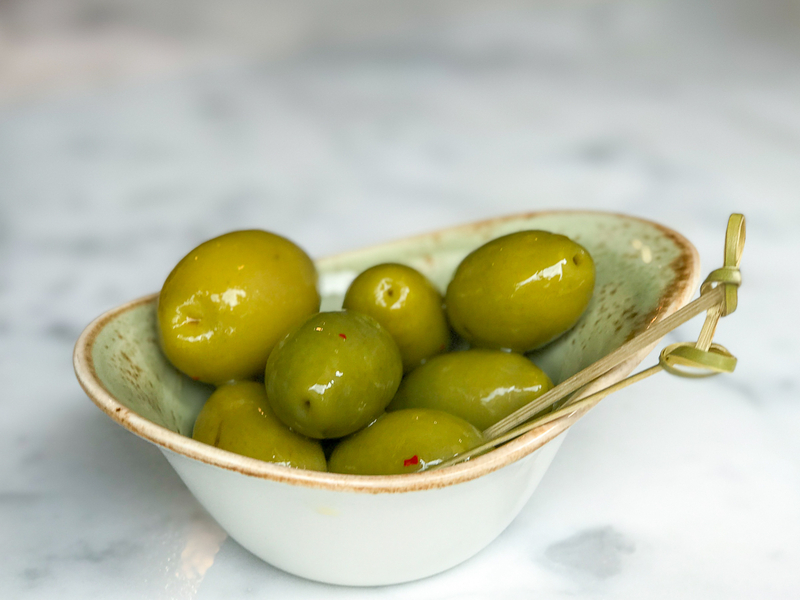 I’m pleased to announce that none of our esteemed chefs, with their 70+ years of combined kitchen experience, manage to totally mess up tomatoes on toast.

Traditionally speaking, Gino’s Tomato Bruschetta (£5.75) is probably the best -  a combining fine-chopped, sweet tomatoes with peppery olive oil on toasted ciabatta. Jamie goes for slow-roast cherry tomatoes and whorls of ricotta, like little Mr Whippys (£4.95) and Marco gives you four mounds of bread topped with tomato and a harsh raw onion, salvaged by a drizzle of really good vintage balsamic (£6.25). 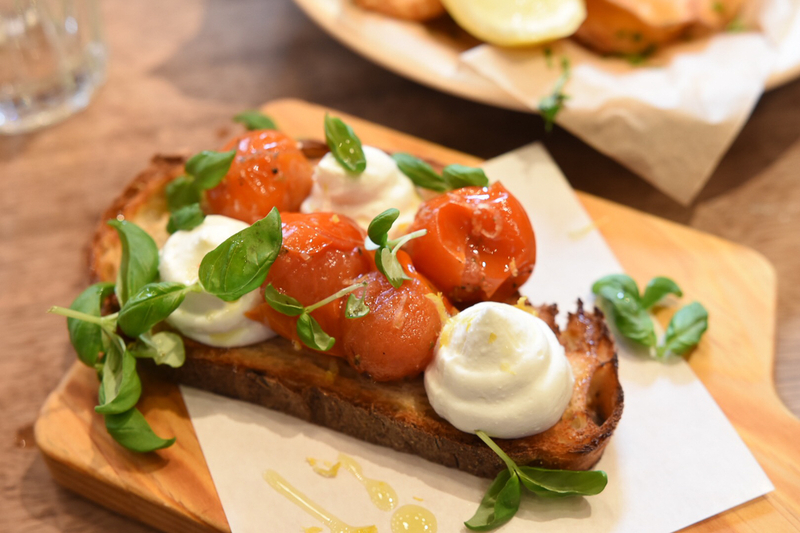 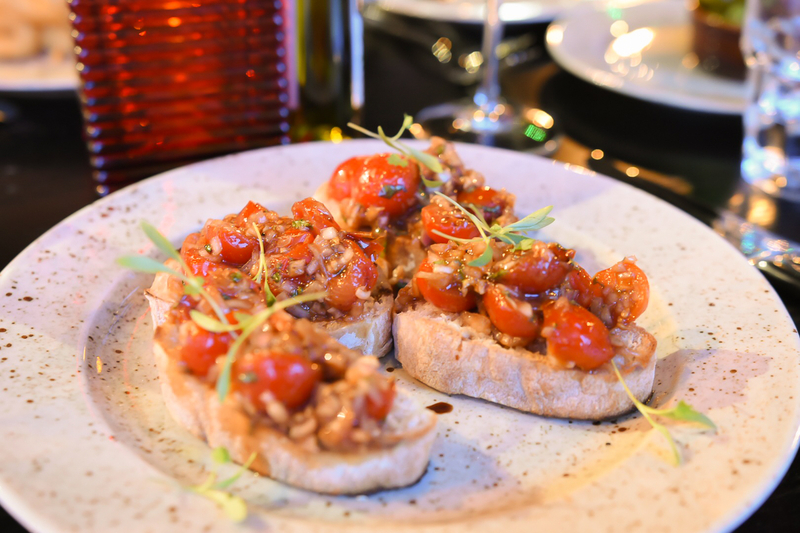 When done well (which usually requires it to be done in small batches) the seafood and vegetables in fritto misto should have a greaseless, almost glassy deep-fried coating. Zucco does it particularly well, as does San Carlo Flying Pizza. None of our telly pals manages to do it justice.

Gino’s Calamari (£7) looks the business: an il Tricolore of red pepper, green courgette, and white calamari, but it’s stingy on the seafood. Jamie comes closest with his Fritto Misto (part of the £11.95 set lunch) - hunks of white fish, calamari, and courgette crisps taste good in their fennel-spiced coating, but are a little soggy. Marco’s Crispy Calamari (£7.5) is a plate of retro squid rings in a batter slimier than Silvio Berlusconi. 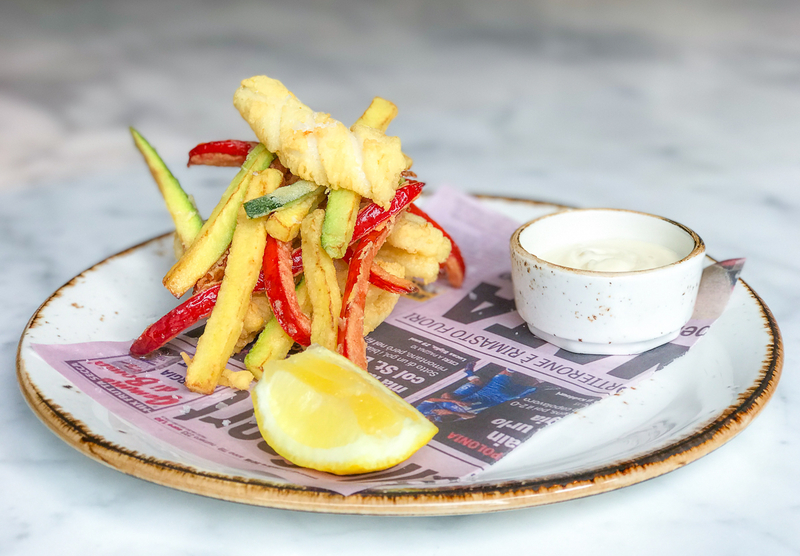 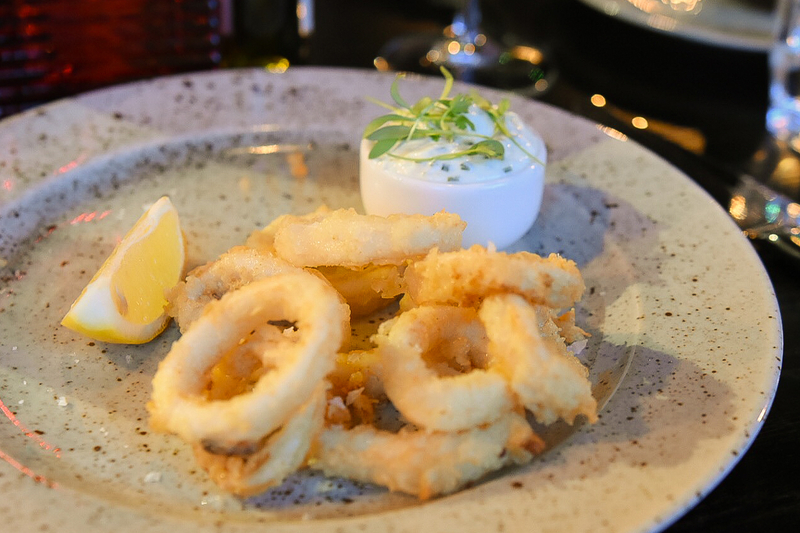 I didn’t think I’d ever describe anything at Jamie’s Italian as “amazing”, yet here we are. Simply heirloom tomatoes, oil, basil, and bocconcini (individual mozzarella with a similar texture to burrata). More cheese would’ve been nice, but for £3.55 who’s complaining? Gino’s version (£6.5) uses the same tomatoes - albeit less of them - but they’re bulked out with rocket and bullied by an enthusiastic dousing of balsamic.

Still, at least they’ve got it on their menu. Marco’s closest alternative is a Panzanella Salad (£3.50) - and a pathetic one at that, with bitter lettuce, flavourless tomatoes, and croutons straight from the catering supplies company. 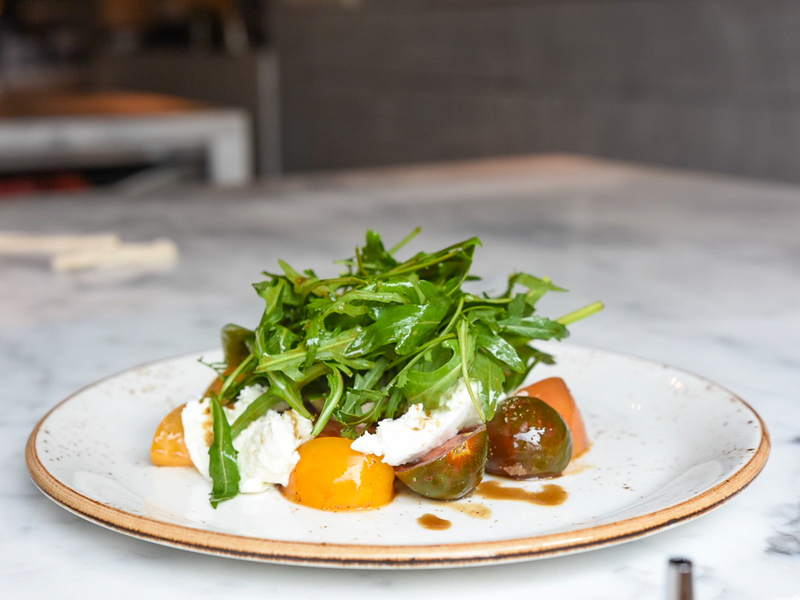 Beauty comes in all shapes and sizes, as demonstrated by the diversity of the garlic bread on offer at these gaffs.

Jamie’s “Ultimate Garlic Bread” (£3.95) is an entire mini-bloomer of the stuff, it tasted freshly-baked, before being sliced open and filled with garlic butter and fresh rosemary. Gino’s Fresh Garlic & Parsley bread (£4) is the pizza dough kind; a big garlicky duvet you’d like to drape yourself in, but tastes faintly of dirty oven and burnt oil. Marco’s Garlic Ciabatta (£3) - flavoured with burnt thyme and charred edges - is alright for mopping up sauce, but may present a choking hazard if eaten as-is. 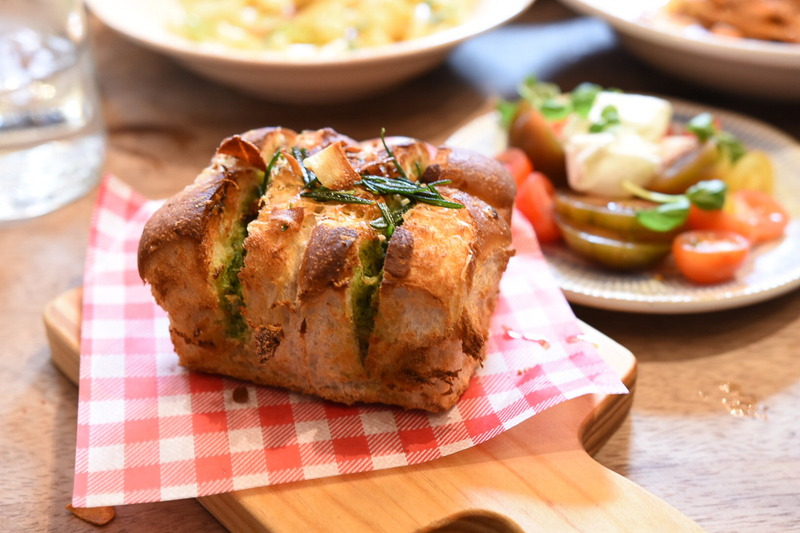 With Britain’s relationship with Europe already the tensest it’s been since the 1940s, Jamie might want to consider reeling it in a bit.

Not content with pissing off Spain during Paella-gate, one-man Article 50 Oliver is trolling Italy by calling cheesy pasta tubes with leeks, topped with crispy bacon “Silky Penne Carbonara” (£6.55). It’s a fine mac & cheese, but by calling it a Carbonara you might as well wipe the creamy sauce off your chops with a copy of the Lisbon Treaty.

Marco’s (£6.5) follows the correct recipe and tastes fine - if a little wet - but Gino’s silky tangle of sticky, wriggly Bucatini Carbonara (£11) with caramelised pancetta is an absolute worldy. 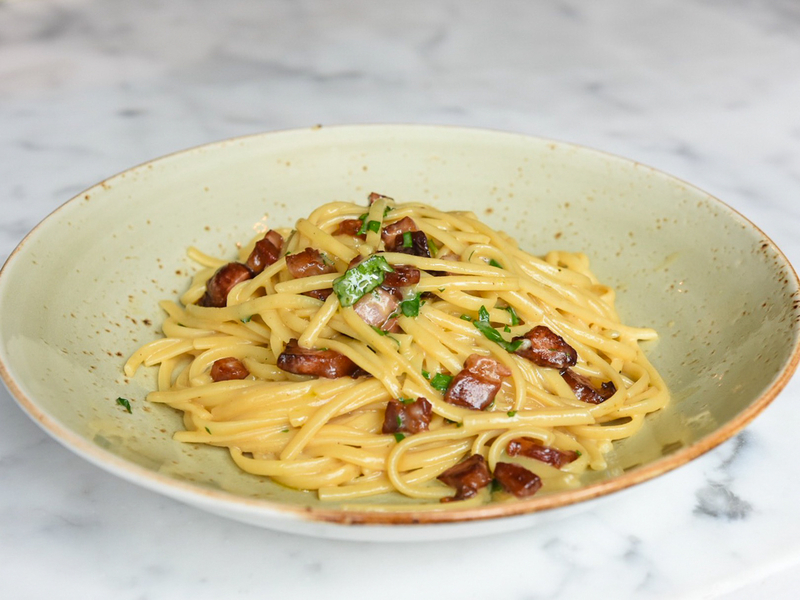 This classic meat-based sauce is the go-to Italian dish for British people - so synonymous with Italian cuisine that it’s become a brand-name for it - as well as OTT, verging-on-racist caricatures. Speaking of which, Gino doesn’t feature in this round as there wasn’t a suitable dish on the menu - ragù is only mentioned in the lasagne, where the bechamel would be too much of a distraction.

Jamie’s Oxtail Tagliatelle (£11.95 as part of two-course set lunch from earlier) is a heap of bouncy yellow tagliatelle, tangled up like headphones in a handbag. There’s a bit too much moisture, and the chunks of carrot make you feel like a schoolkid being tricked into eating hidden veg, but it’s super-rich with oxtail and Chianti.

Marco’s Spaghetti Bolognese (£5.95) looks like the kind of ready meal a rejected Dinner Date contestant throws away while getting defensive: “I don’t think we had that much of a spark, anyway”, he claims. Why did you score her three stars on the night then mate? Pathetic. 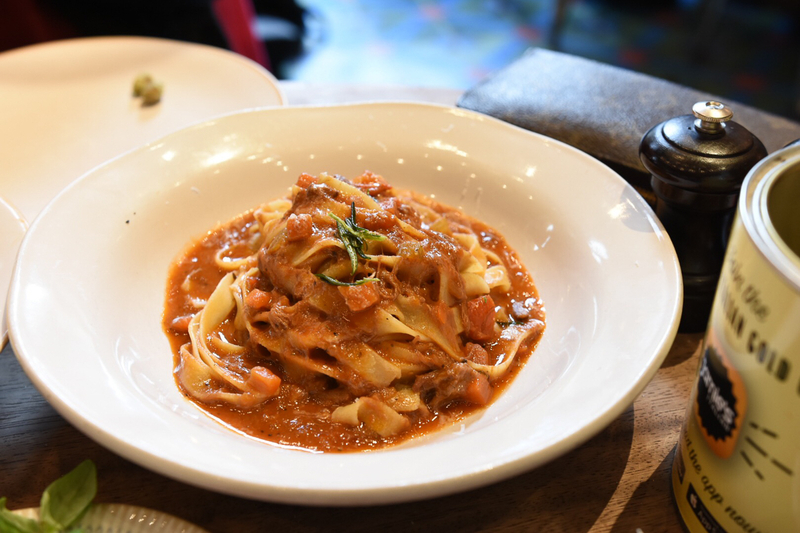 Decent, consistent cooking and great produce by any standards - not just as chain restaurants go - means Jamie's Italian beats the other two by a landslide.

Second-place Gino D'Acampo's My Restaurant has come on a bit since our first visit that we based our review on, so it might deserve an extra point.

The only redeeming thing about Marco’s New York Italian is its proximity to the Wetherspoons around the corner, where you can get a similar spaghetti bolognese for about half the price.

Top 50 Gastropubs 2021: Which pubs in the North are included?
Read Next
Web Design Manchester MadeByShape