‘By the way, you’ve been eating ants’ - Restaurant review: Roski

ANTON Piotrowski has attracted a deal of drama since announcing himself to the world on TV's Masterchef.

Some of that drama, like a marital split, was the kitchen sink variety; some, like the manner of his sudden departure from a Plymouth restaurant, the kitchen stove sort.

Mind you, he can dish it out, literally so, with food that has both excited and exasperated.

One starter, served to Devon diners on the backs of their hands, had Daily Mail readers apoplectic. And here at Roski, the dead ants, among the scallop and celeriac, had us uncertain whether to call in the Scores On The Doors team or simply wonder what he would find next to spice up the parsnip puree.

Charming he may have been in Confidential’s exclusive chat with him last September, but Piotrowski doesn’t lack confidence. Cooking is, he says, “what I’m amazing at”.

My God, the man’s only been in Liverpool five minutes and he’s already turned the recipe for the city’s national dish, scouse, on its head and shaken it to pieces.

Like the music – Sinatra, Aretha – it’s all very tasteful and restrained and then the food hits the table and the fireworks start

Even his Masterchef: The Professionals victory was not without controversy as, for the first and only time, the title was divided into two.

Piotrowski was gracious in joint victory with Keri Moss and subsequently substantiated his credentials at Devon’s Treby Arms pub, while he and then wife Clare were at the helm, earning a Michelin star after being told it could never happen.

Stress, depression, ill health and the rift in his marriage were said to be behind his shock departure in March last year, before a joint venture in Plymouth led to a similarly dramatic exit after falling out with his partners and being left “out on the street”.

If he was in the gutter, Piotrowski was still looking at the stars and now he’s hoping to bring a little of that Michelin sparkle to Liverpool. His migration to the Mersey came after he “fell in love with the place and the people”, and one of those people in particular, girlfriend Rose, a native of his adopted city and front of house at Röski.

Perhaps it was kismet that the search for a central location coincided with Puschka’s much-loved owners Doug and Glen shutting up shop on Rodney Street after 16 years to pursue their dreams in France.

That allowed Piotrowski to live his own dream of a restaurant bearing his name. Actually, two names; if you hadn’t guessed already, Röski is an amalgam of his name and hers. A more egocentric chef might have insisted on “Skirös”.

Like the music – Sinatra, Aretha – it’s all very tasteful and restrained and then the food hits the table and the fireworks start.

You have the choice between a five-course (£55) and a seven-course (£75) taster menu, the seven being the five plus another two, if you see what I mean. There is a vegetarian version (£55), “from the soil” they say, though cheese and eggs may say otherwise. We have one of each.

First comes onion powder, and yuzu, a Japanese fruit that can’t decide if it’s a lemon or a mandarin or a grapefruit. A shard of dehydrated carrot flecked with dabs of yellow and green and white, each a different taste of Thailand, looks for all the world like an artist’s palette. And it is. The whole dish an explosion of colours, textures, flavours. 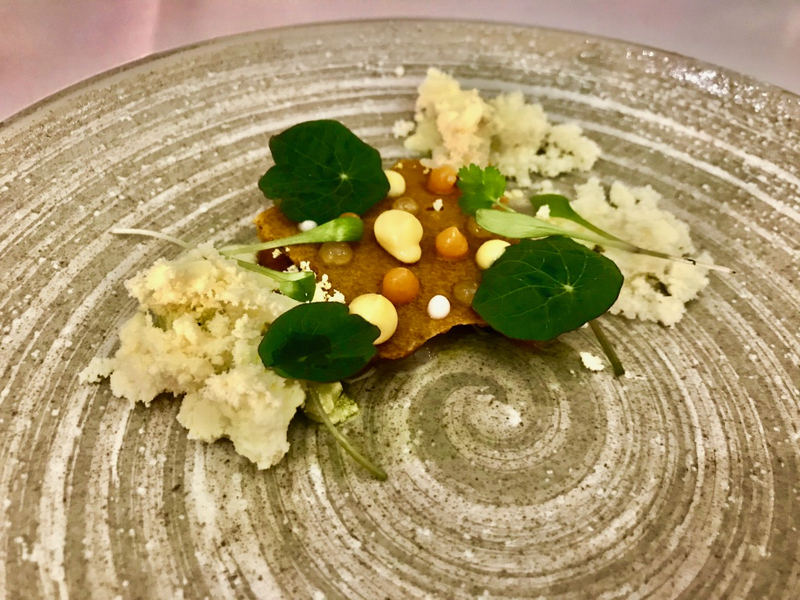 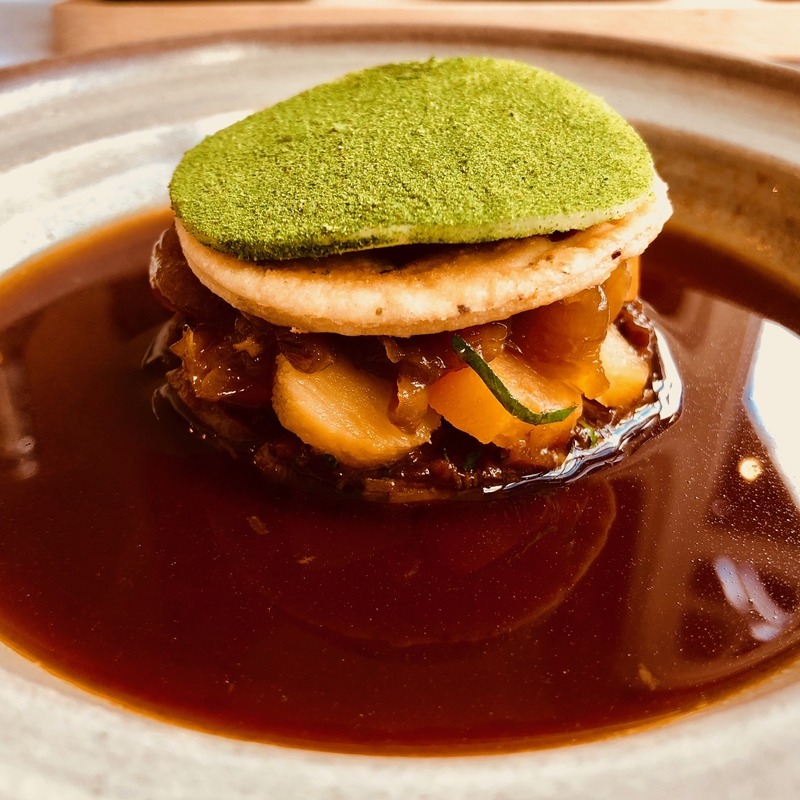 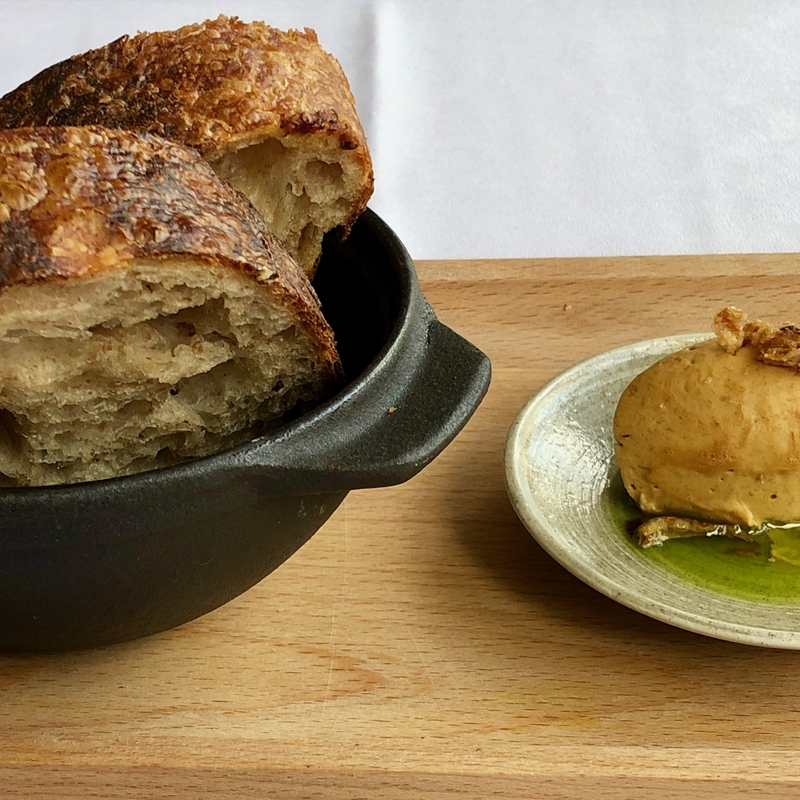 Next up, mushroom ragu given time to achieve depth and a melting softness and an umami-richness that comes from aged Parmesan, some of which had been reserved for a tuile, the most delicate of baked wafers.

All of this before we even receive item number one of five. For the flesh-eater this means Piotrowski’s take on scouse, taken apart and reassembled like never before. A shallow round tower whose roof is a tile of crisped fermented turnip sprinkled with parsley dust, covering a layer of smoked vegetables, and then the real alchemy, involving locally bred beef brisket, which ages for a hundred days and takes a long hot bath before being chopped up and mixed up with Norwegian spices and caramelised onion and served with a heavy beef knuckle marrow gravy. Sound good? Of course it bloody is.

All that’s missing is the spuds, carbs instead coming in the form of another staple, excellent buttermilk bread, via a local oven, with onion butter, creamy and savoury-sweet, so good it doesn’t even need bread, just a spoon.

Moving on, there’s a perfect hunk of venison, Puschka-pink on the outer, so blood red on the inner I swear I could detect a pulse, with added zest by way of breaded black pudding.

Then a beautiful Isle of Skye scallop with celeriac, roasted in a coat of Marmite and parsnip purée and, well, some kind of black, savoury, crunchy topping thing.

“By the way,” we’re informed, with as much matter-of-factness as can be mustered, “you’ve been eating ants.”

They have, says the waiter, been trialling “telling people and not telling people”. Some diners have been put off their food, apparently.

These ants are not ones they found scurrying around the back yard, they are edible, bought in, pre-cooked. How did they taste? Savoury, crunchy, not unpleasant. 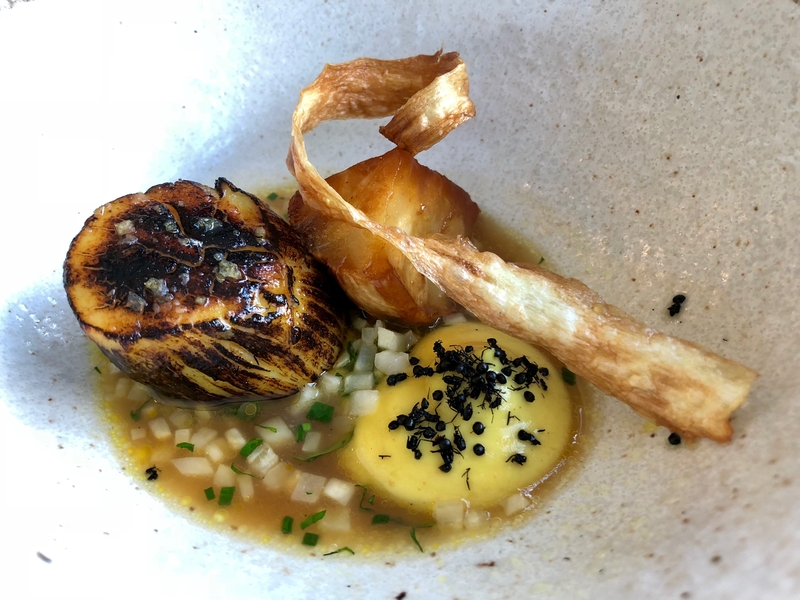 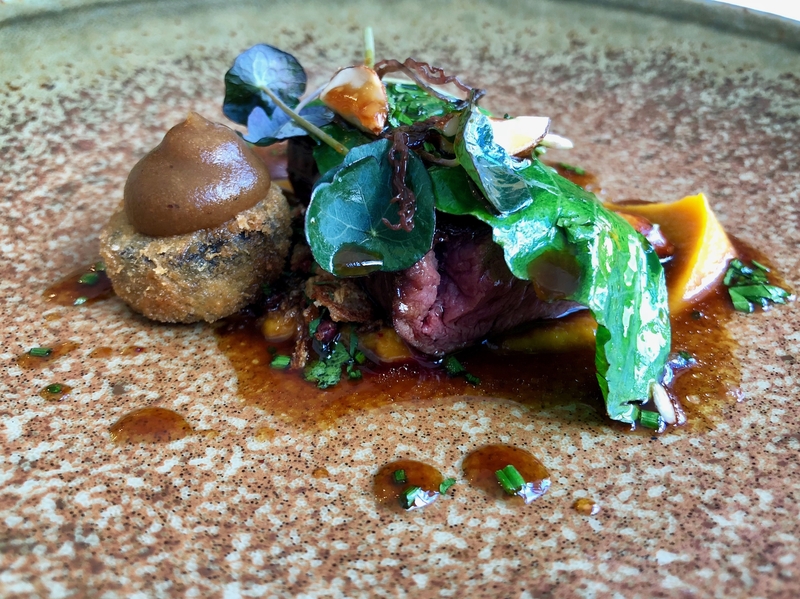 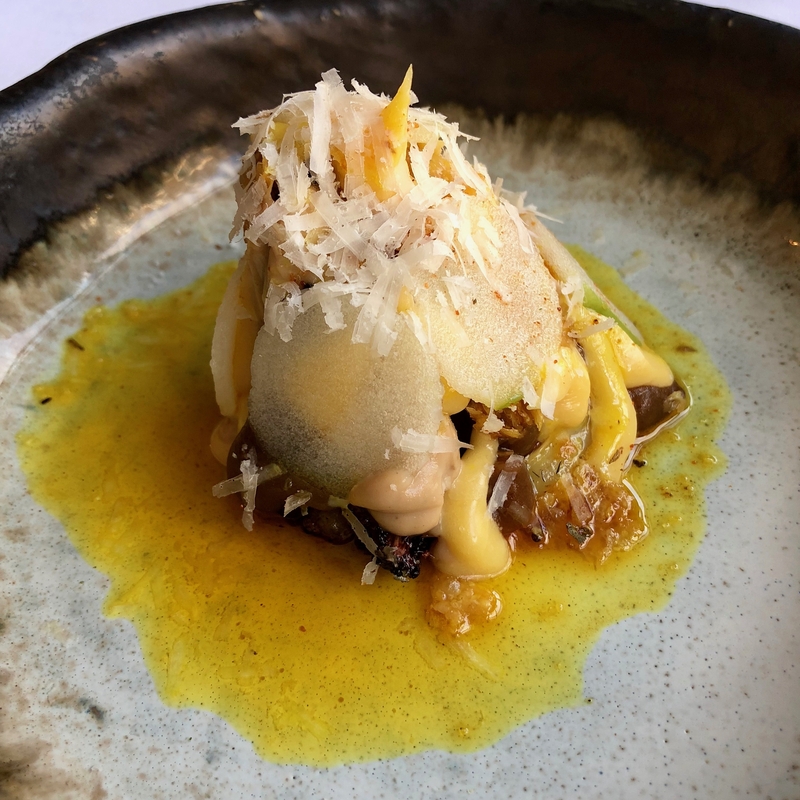 The one dip in quality comes with roasted cauliflower, underseasoned and just rather plain, which all the parmesan custard and curry oil in the world could not disguise. But the cauli wobble was no more than that and no indicator of a general disregard for vegetables.

Among the meat-free there’s Kentucky fried, salt-baked Jerusalem artichoke, KFC minus the death and the grease, alongside a dome of lip-smacking brown sauce decorated with parsnip and rosemary needles to resemble an Olympic stadium for the 2072 Games.

A good-looking Thai pumpkin curry with peanuts and seaweed and shades of orange is nicely executed but lacks a distinctive quality. No matter, there’s a lush parsnip carbonara with more of that Parmesan and a confit egg yolk which begs to be mopped. 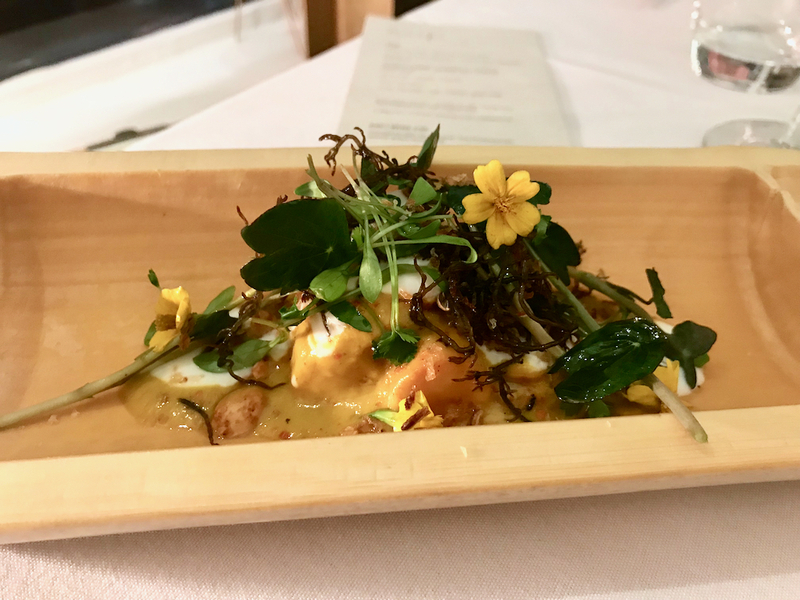 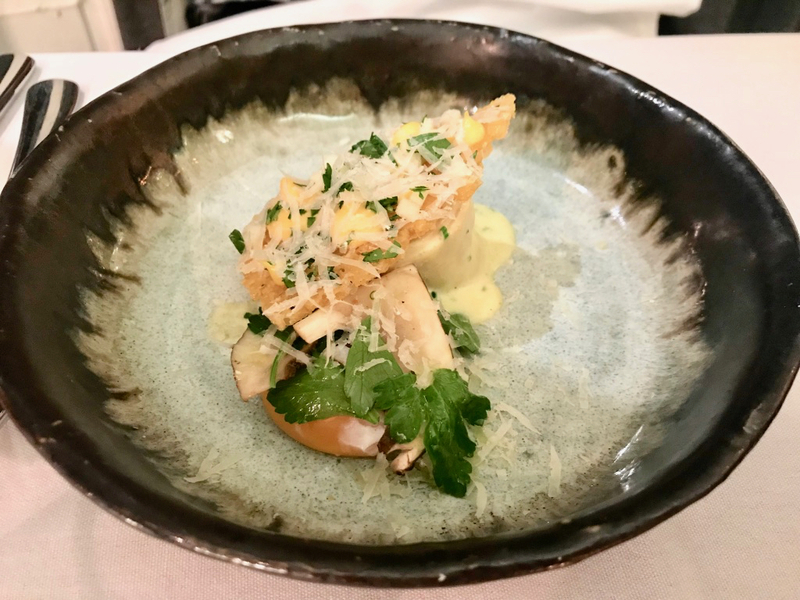 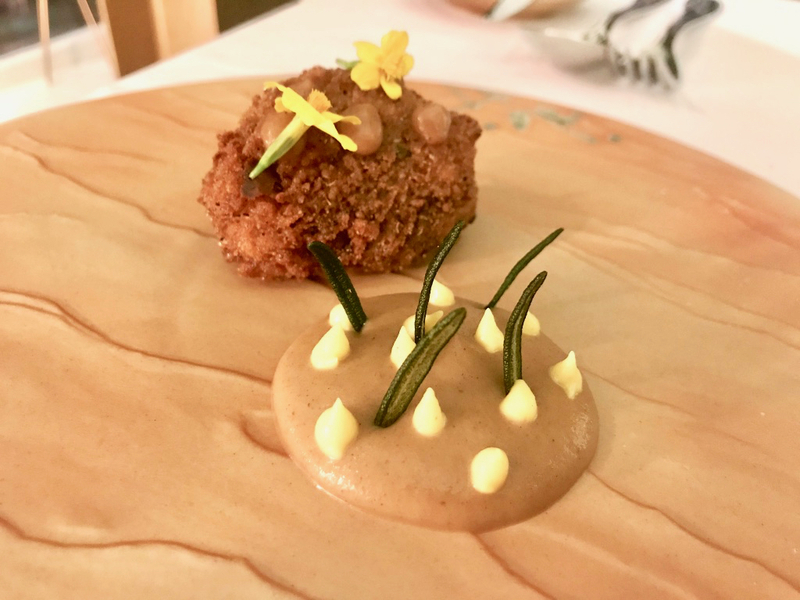 Then onion three ways, the humble vegetable whose contribution to gastronomy goes largely unrecognised, getting the recognition it deserves: first, an onion “cigar”, a cylinder of onion and puff pastry, filled with the ashes of a close relative, a leek; then superior onion rings, just to keep us grounded; finally, dehydrated onion formed into a lattice structure you could charge money to see at the Tate.

The menus meet at the end with Black Forest gateau, scourge of 1970s restaurants, broken down and reimagined with kirsch cherries, creamed pistachio, chocolate, caramel sauce and, cutting through it all, a goat’s milk granita, cold and clean as a whistle.

A little piece of theatre to accompany your pudding involves dry ice, foliage and the scent of pine to recreate a mist-covered treescape. 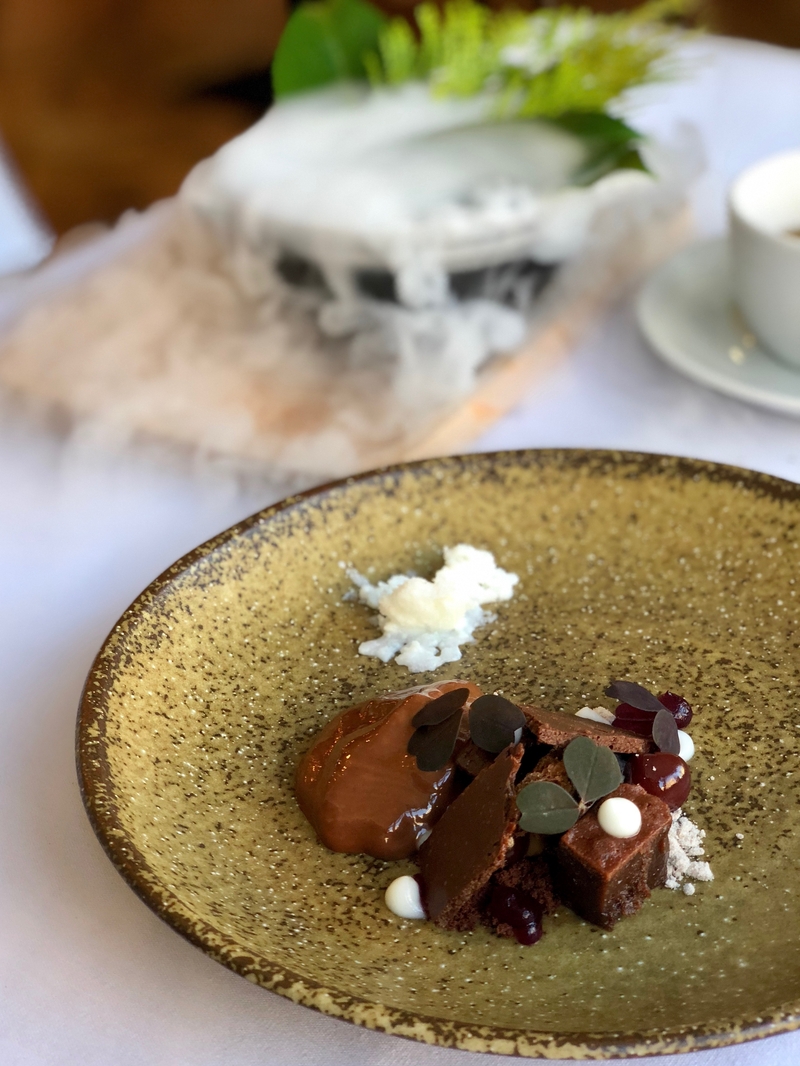 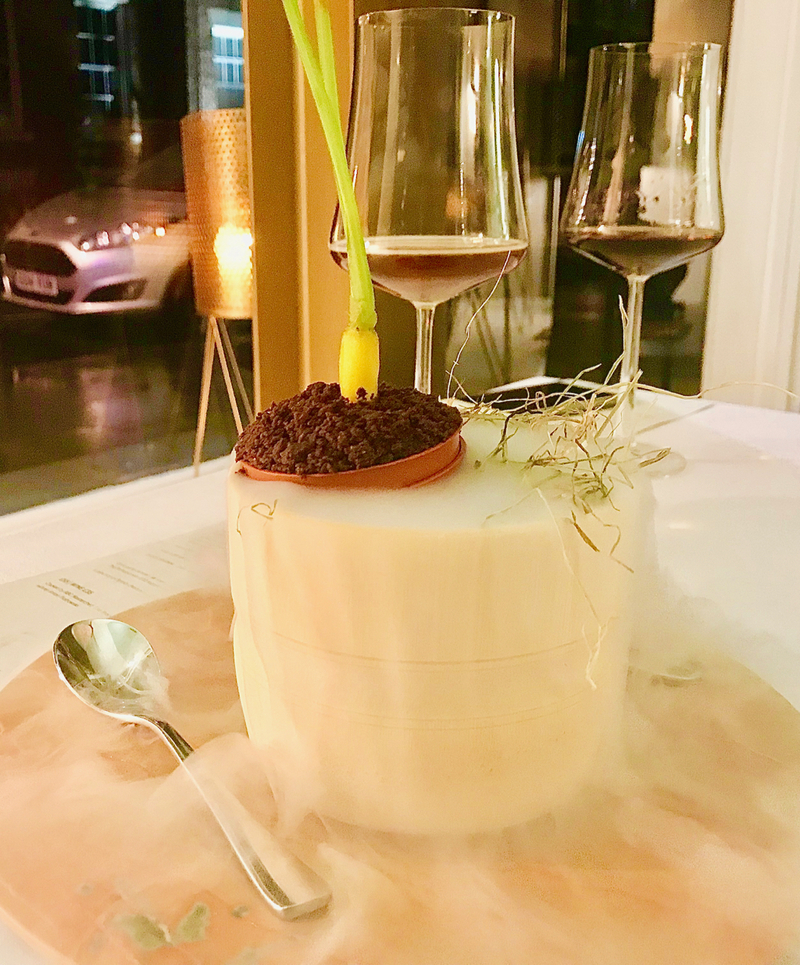 That would have done us but it would be wrong not to try the dish that made his name. Here they call it Röski Gone Carrots (£10 supplement) and it’s a beauty: Piotrowski ’s take on carrot cake, presented in a tiny plastic flowerpot (cue more mist), complete with crumbly chocolate soil, and growing out of it, a real baby carrot.  Dig under the “soil” and there’s cream and a dreamy sponge, soft and light and gently carroty.

Will Röski earn the city its long-awaited first Michelin star? Probably. I get the feeling this West Country wizard is still taking the lie of the land in Liverpool, that the best is ahead of us.

As for ant on the menu, has Anton created the world's first literal signature dish? If so, be glad his name's not Alice. 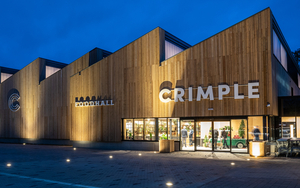