Brownhill & Co - A drop of Belgium in Leeds

LEEDS has become a real destination for beer lovers over the last few years. Our city boasts some fantastic breweries, and plenty of specialist venues to try a variety of beers. Richard and Bryony Brownhill have contributed a great deal towards our thriving beer scene, so we caught up with them to find out more about their new venture, Brownhill & Co.

We do love a pint, but this was our chance to do something different

They met while working together at The Sheffield Tap. This is where Bryony fell in love with beer and, when Richard joined the company after working for the Thornbridge Brewery group, they became a couple. Both are passionate about hospitality. Whenever there’s an opportunity for a good meal out together, they’re always observing and critiquing the service. They’ve put what they’ve learned into practice, which is why the service customers receive at both their establishments – Brownhill & Co along with their first business venture, Little Leeds Beer House – is second to none.

Little Leeds Beer House opened in 2015 as a bottle shop with a few draught lines. The selection is meticulously curated, and you’ll find a wide variety of styles. “We have done a lot with our tiny space in the Corn Exchange – we love being the reason people have an excuse to enter this incredible building," Bryony tells me. "When we met I encouraged Richard to think about what he wanted from his hospitality career, at this point serving beer was a part-time job for me. We felt retail was a really solid starting block for us. Thankfully we have the most wonderful customers, who, like us, want to support independent businesses and the local economy. We can’t thank them enough for their encouragement and thirst for delicious beer, the community of beer fans and people working in the industry around us feels really special. Leeds is great like that.”

The couple felt that while Leeds is great for beer production and quality drinking establishments, there was something missing for them as consumers. Travelling abroad for work and family trips, they have visited countless well-established beer venues on the continent. The beer cafes in Belgium and the drinking culture there had a special appeal for them, so they set about creating something new in Leeds city centre, and Brownhill & Co was born. They chose a location on Central Road, and feel the street has a lot of potential with the restructuring of the city centre. They’re also very close to their first location, so can send customers between the two. 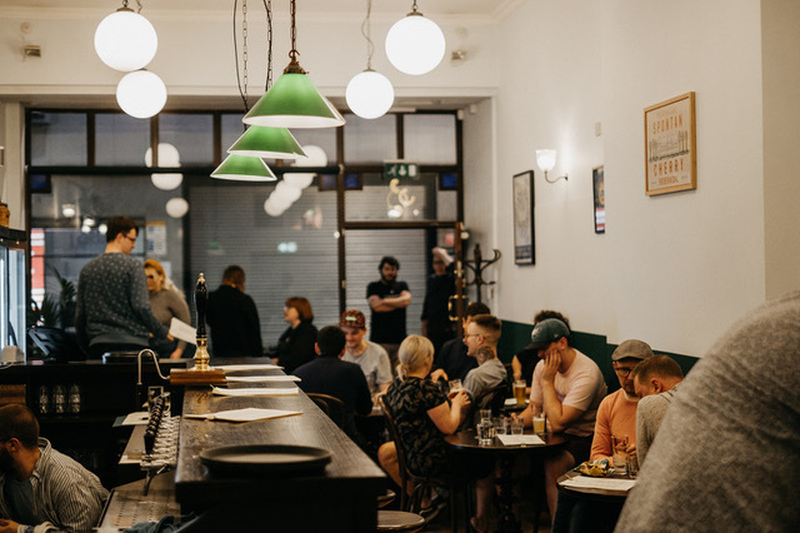 To create that European feeling, the couple focus on creating a refined but accessible environment, allowing customers to enjoy their time and company more fully. Table service is a big part of this, says Bryony: “Borrowing from our continental neighbours, the table service and smaller serving sizes are part of the experience. Pint culture will always have its place, and we do love a pint, but this was our chance to do something different. We take our duty to sell alcohol responsibly seriously, everyone is encouraged to stay hydrated and the smaller measures also help with this. We always make sure our customers have water on the table too.”

The Brownhill & Co bar boasts 10 rotating keg lines, and one cask, but perhaps most exciting is their bottle fridge, which hosts an array of specialist beers. To crack open a bottle of Lambic in a calm and beautiful setting is one of the joys of being a beer lover. The venue is simple in its decor, deep green tiles and paint, with lots of plants and natural light. Little details such as the gold logos on the glassware and the artwork on the walls pull everything together.

Bryony studied ceramics at university, and her beer tankards are particularly popular on sale at Little Leeds Beer House. She’s keen to develop more decorative pieces with iconic Leeds imagery to celebrate the local beer scene, so expect to see them at Brownhill at some point.

The Brownhills' plan to nurture their current venues before considering any further ventures. Richard intends to put his wealth of event experience to use, and he was lead organiser of the first five Northern Monk beer festivals (Hop City and Dark City) and runs Leeds Beer Week. He has pulled together some of the best breweries from across the globe for events at Little Leeds Beer House, and the second bar gives them a little more room to accommodate these special occasions.

If you’re seeking the charm of a European beer bar, this is where you’ll find it. The knowledge in the team is some of the best in the industry, and this shows in the selection they curate and the service they provide. I can’t wait to see how beer-focused venues like these will shift our drinking culture towards something a little more worldly.