Signs of the times: the blue plaques of Leeds

As Leeds looks forward to the future, hundreds of plaques remind us who made us what we are today

As Leeds looks forward to the future, with new long-term developments and the giddy potential of 2023, we never shy away from recognising the plucky pioneers and humble structures that helped make it what it is today. You can’t stop history, it’s happening all the time, and if you don’t stop and look around you might miss it. Started by the Leeds Civic Trust in 1987, the blue plaques initiative now recognises 163 people, events and buildings that have shaped Leeds’ history.

Formed in 1965, partly in reaction to the wide scale destruction of historic buildings in Leeds in the 1960s and 70s, their opening mantra is “What we build today is tomorrow’s heritage”. As such they’re keen to avoid being dismissed as a dusty, sepia-tinted organisation hooked on the past.

It’s important to understand how we got here, and what extraordinary things happened along the way.

Pouring scorn on ‘progress’ or not appreciating the rate at which Leeds is developing for the good is short sighted, but it’s important to understand how we got here, and what extraordinary things happened along the way. Sometimes in the places we hitherto felt were utterly mundane. That is what the blue plaque scheme is all about; making sure the outwardly unremarkable becomes remarkable.

There are over 60 in the square mile of the city centre alone (so a pub crawl/heritage trail is certainly something to put on your social calendar) but it’s important to remember that there is a strict criteria for what is deserving of or what merits a blue plaque. The Civic Trust states that “the event, person, institution or building commemorated must be of very special importance in the history, heritage or shaping of Leeds”.

This can also extend to places or people who started or briefly lived in Leeds, but whose achievements then went on to resonate on a national scale. 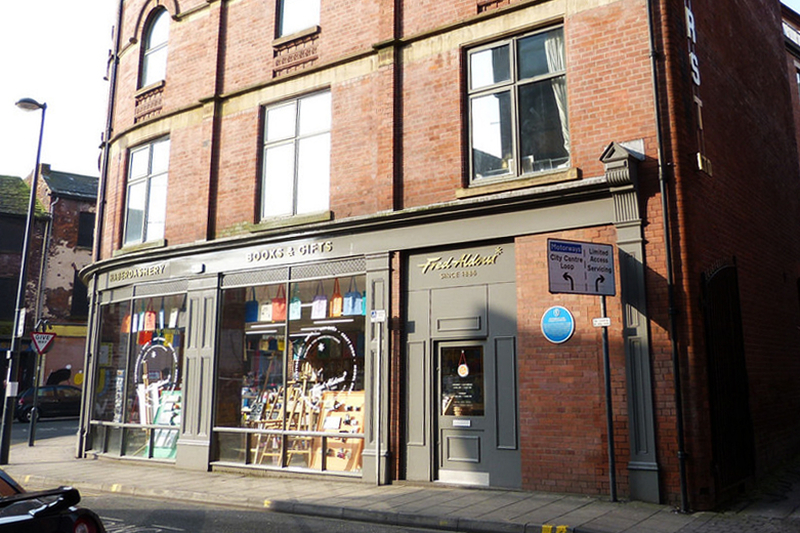 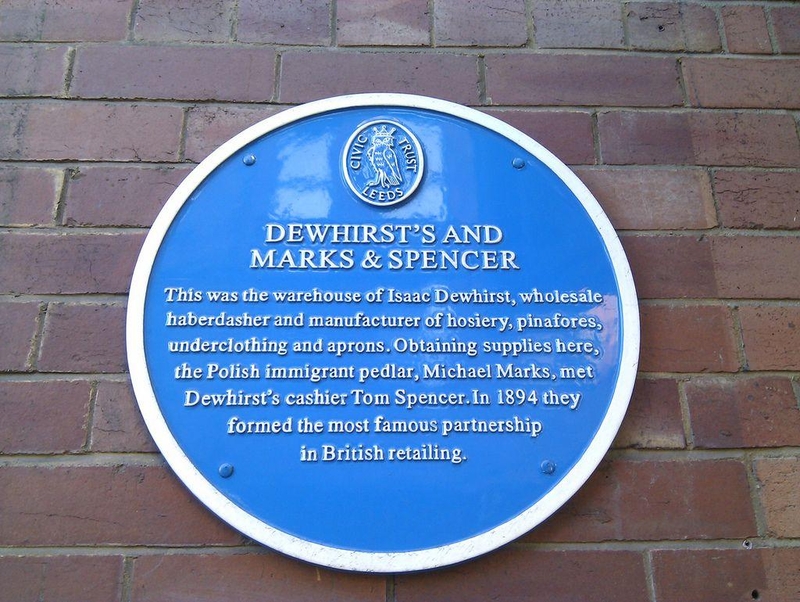 On a random wall on Harper Street opposite Crowd of Favours signifies the location of a warehouse run by Isaac Dewhirst, where polish immigrant Michael Marks first met cashier Tom Spencer. They went into business together in 1894, although you probably know them better by their surnames. A similar plaque in Harehills marks the location of the first headquarters of Montague Burton, whose clothing empire was employing 10,500 people in 1925. It is hard to imagine it now.

The tapas-loving hordes dipping their Chorizo lollipops at the brilliant Iberica might have missed the blue plaque outside recognising the significance of Hepper House - a 19th Century auction house formerly used by Bonhams. The blue plaque outside Salem Chapel next to the Tetley might suit a bit of yellow on there too: amongst other things, this was the site on which a meeting was held to form Leeds United Football Club in October 1919. Speaking of Tetley’s, a blue plaque on the famous site signifies the starting point of Leeds’ brewing empire in 1822. 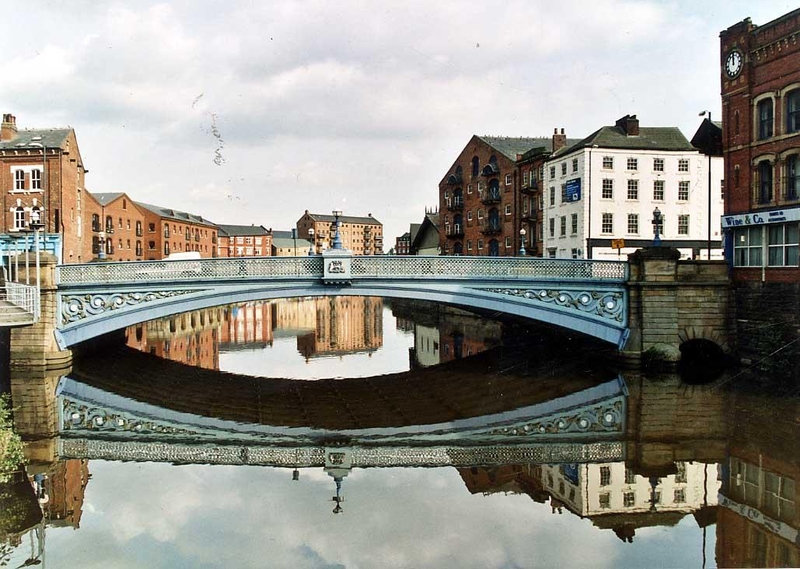 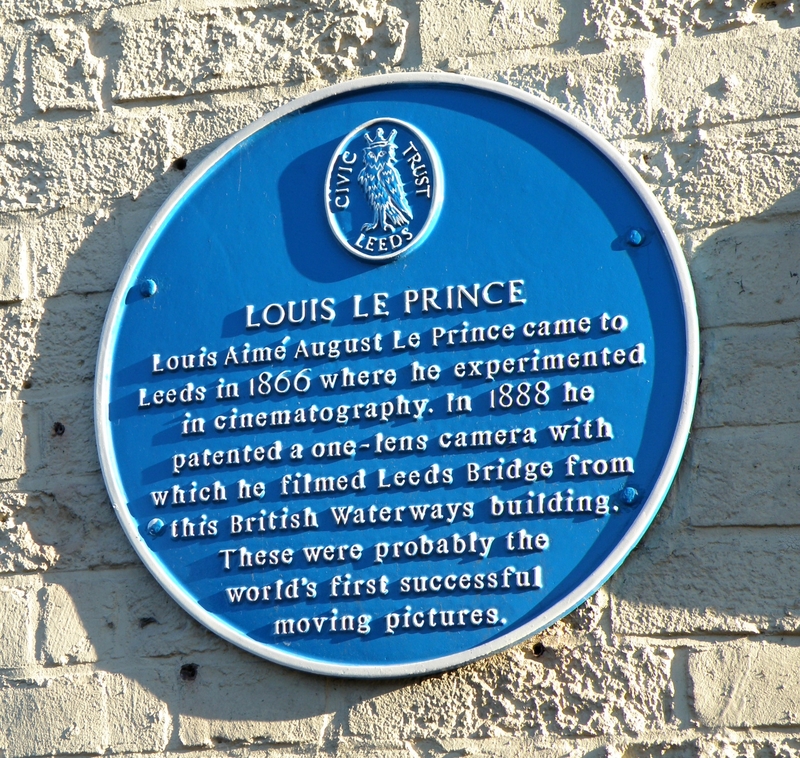 There’s a wealth of Leeds cultural references marked by a blue plaque, including one on the wall of a former British Waterways building on Leeds Bridge, marking the location that Louis Le Prince filmed what is believed to be the first moving picture images in 1888.

Leeds’ theatre heritage is also recognised; City Varieties, home of BBC’s The Good Old Days, which witnessed performances from Harry Houdini and Charlie Chaplin. The famous cinemas of Leeds such as the former Majestic in City Square and the Cottage Road at Headingley don’t escape attention either.

Perhaps the most famous blue plaque in Leeds is outside the Leeds University Student Union, which marks the famous 'Live at Leeds' gig by The Who in the Refectory in 1970, which has since become notorious as one of the best live albums ever. 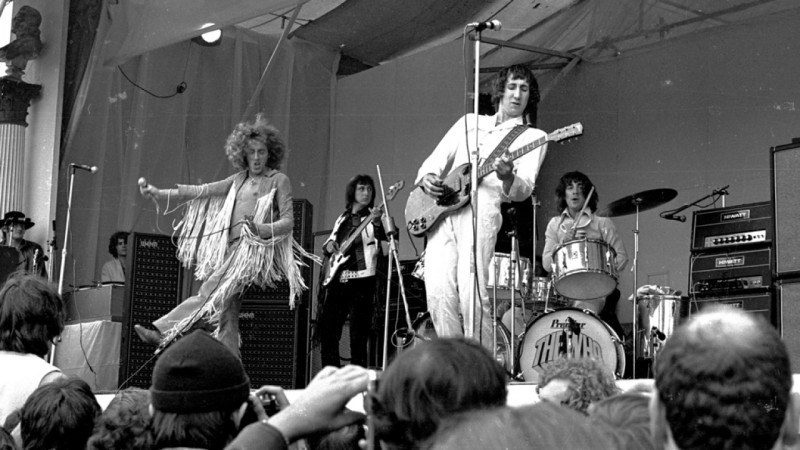 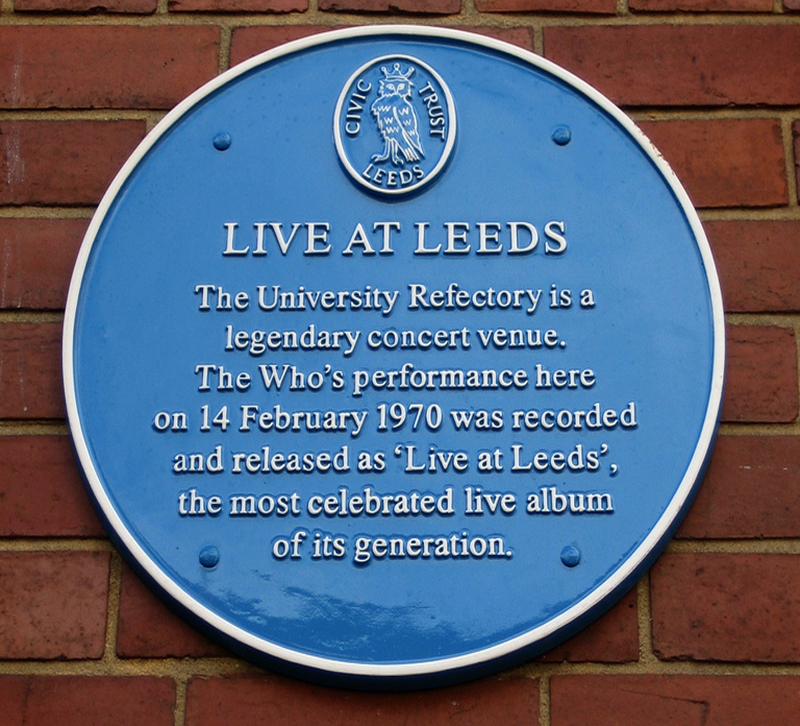 Elsewhere, of course Whitelocks pub has a plaque staking its claim as Leeds’ oldest boozer - having first opened in 1715 as the Turk’s Head - as does The New Penny for its contribution to Leeds' LGBTQ community before and after the legalisation of homosexuality.

There’s even a random house off Otley Road near Lawnswood School recognising where JRR Tolkien – author of The Hobbit and Lord of the Rings – lived for two years from 1924.

Reading the full list of Leeds' blue plaques peels away the layers of Leeds history, revealing an awful lot that you never knew - that Leeds Civic Trust suggest you ought to - but to go and visit these locations and to physically seek the blue plaques out is to live and breathe this history, to extend your knowledge with a treasure map of stories and to be able to say you are truly ‘Leeds’.

Chances are you’re probably not far from one right now; next time you idly read your phone while waiting for the bus or sit in a shop doorway eating a kebab at 2.30am, you might be bypassing one of the many locations where Leeds as we know it was formed, and there’s a big, shiny blue thing there to tell you all about it.