Wouldn’t it be great to have a test for Covid-19 that’s as simple as a home pregnancy kit?

Instead of weeing on it, you spit and it gives you an answer in ten minutes.

Find out whether or not you’ve got it - or indeed, if you've had it. Nip to the pharmacy for one; grab one at the door of a restaurant or pub.

Wait ten minutes for the green light, and you’re in.

Avacta’s simple saliva test appears to be ticking the boxes

Get on a plane having done the test. Get off the plane coming home, do another test, no quarantine. Holidays to the sun are opened up again. Christmas is back on the menu. Everyone at work, every Monday, tested.

Yes, it would be great, but is it for real?

It turns out, it may well be.

As part of Boris’s 'Moonshot' program these are the types of tests - using saliva and giving highly accurate answers in ten minutes - that the government have been talking about when they tell us that they are ‘ramping up’ mass testing.

Testing that will finally give us a way of controlling the spread of the virus without using lockdown lump hammers that smash the economy up as well as the virus.

It seems the current row about the three-tier lockdown system and how much Sunak will be spending on keeping firms afloat by paying staff will soon disappear.

A briefing note published on the government website Parliament.UK yesterday has finally confirmed that the biotechnology company Avacta is one of the four companies who appear very close to getting clearance for distribution of the tests.

Avacta’s simple saliva test appears to be ticking the boxes that will be most effective in lifting lockdown lunacy for the public.

There are a number of questions Manchester Mayor, Andy Burnham and others should be asking Boris over the weekend - not just about how much money Sunak is prepared to dole out. 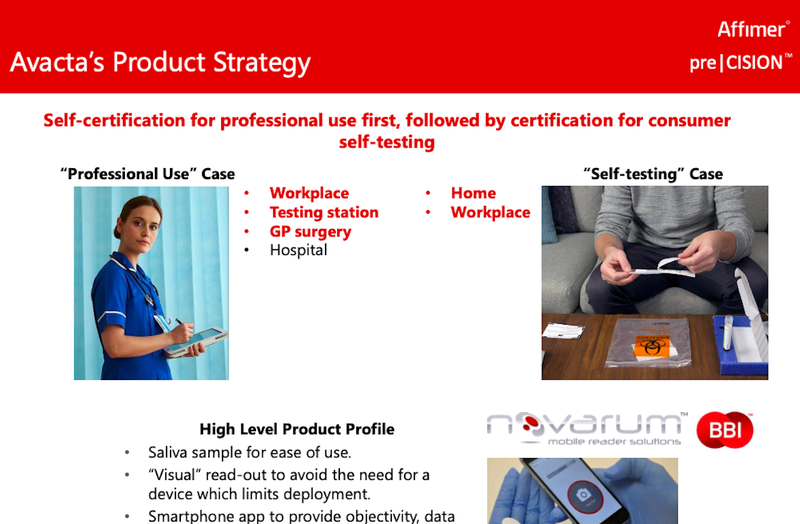 They should be demanding proof that the hospitality industry are the villains, because the stats appear to refute this.

Public Health England figures show that this week, only 3% of infections came from the hospitality sector. If they can’t prove otherwise, they should challenge the 10:00pm curfew as well as any further closures.

A Twitter poll found that 82% of Confidentials readers do not agree with it.

Get the shifty Old Etonian to open up about the Moonshot saliva tests.

How close are they? Is Boris being over cautious because of his habit of hype in the past? If so, this isn’t the time.

We need some good news.

Read: Hospitality businesses unite in campaign against the 10pm curfew