10 of the best beer gardens in Leeds

Because sunshine and beer are the best of mates.

With the annual three days of British summertime set to fall any time between now and mid-November, Brits up and down the country are tantalisingly poised, tank tops at the ready, to whip it all off and take to the great outdoors to revel in the glory of the strange, glowing ball of heat in the sky.

And where better to catch some rays than in the company of delicious beer? Now, there’s no denying that Leeds has some mighty fine outdoor booze shrines dotted around the city, but weekends, and particularly bank holidays, can see them get rather full. The queues to get a spot on the roof of the Belgrave or Headrow House are fast becoming the stuff of legend.

But these are far from the only choices for us Leeds folk these days, so let’s take a look at some of the other brilliant options for an al fresco bevvy. 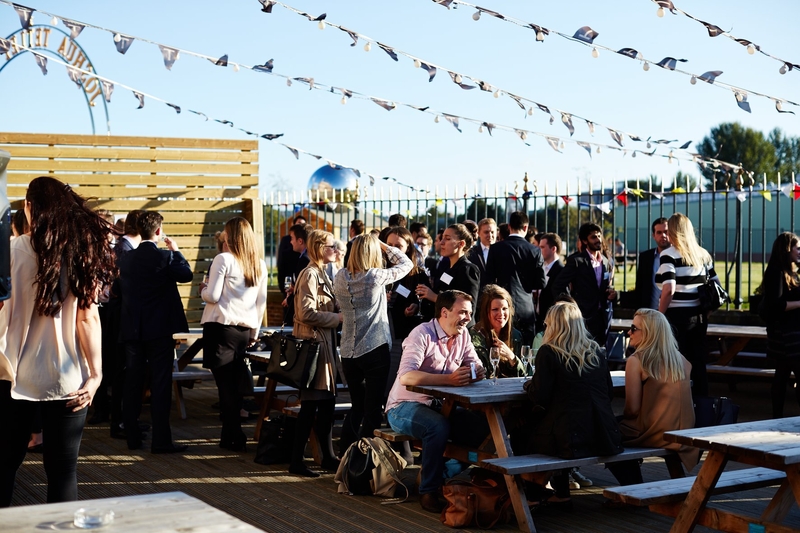 The Tetley is one of Leeds’ most iconic buildings. Now home to an art gallery and bar-cum-restaurant, this was once the site of one of the country’s most successful breweries. Fortunately, fears of its demolition have long since been quashed, and plans for future development could see it become one of the most exciting parts of Leeds’ ongoing South Bank initiative. For now at least, it’s home to an enormous beer garden, and has even run its own food and music festivals on site. 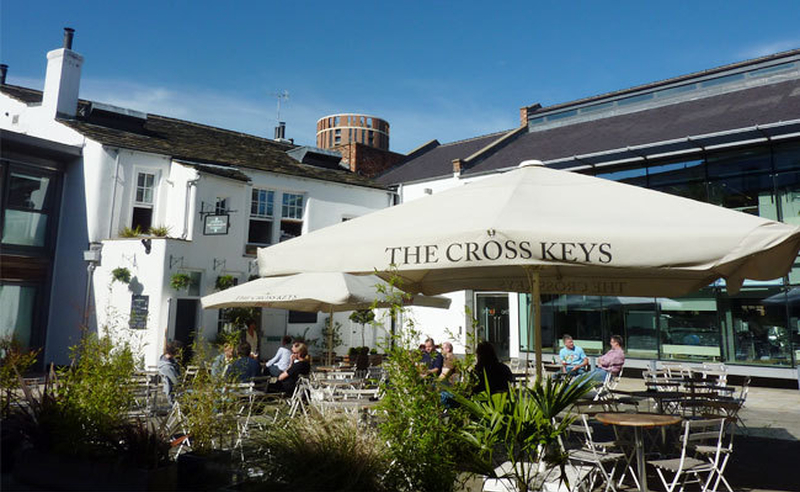 Backing on to the iconic foundry building in Holbeck, the Cross Keys has recently been taken over by North Bar, which means that you can find a substantial amount of very good, strong beer as well as a diverse whisky menu. If you venture out into the beer garden, you’ll find an array of long benches and seasonal flowers, as well as several large parasols - a wise choice; the beer garden is probably the biggest sun trap in the city. 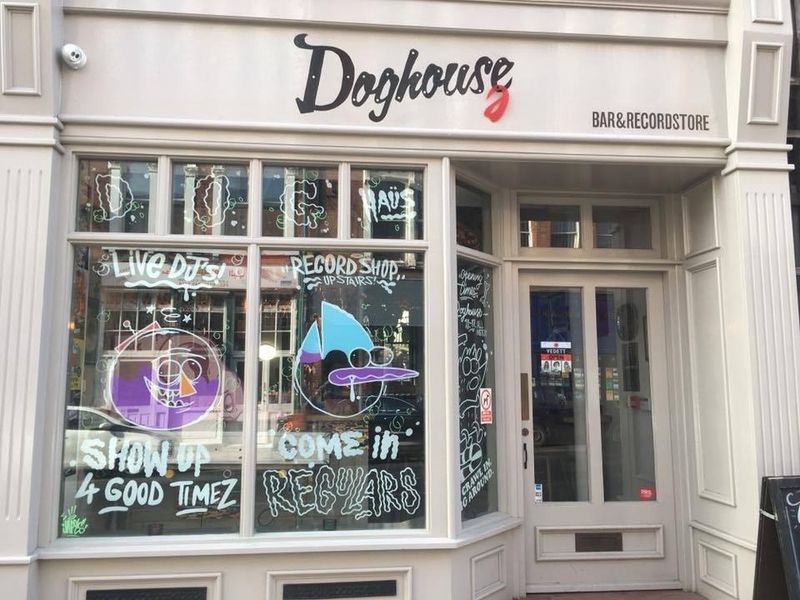 Certainly the smallest outdoor area on the list, but also perhaps the least well-known, Doghouse’s back yard is shared with Wapentake next door, making it possibly the best-smelling beer garden in Leeds. Get a refreshing pint of Vedett or a bottle of Goose Island in and then venture upstairs, before turning left and out of the door. With a record store on the top floor, there’s the added advantage of some excellent tunes providing the ideal accompaniment to your slow descent into an incoherent stupor. 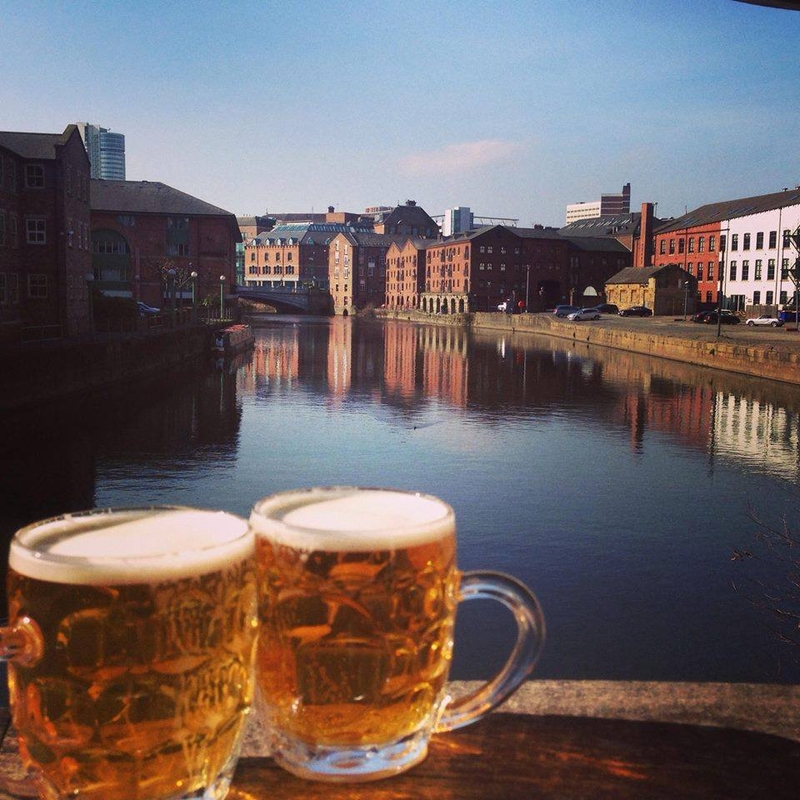 Talk about an ideal spot for a first date; if it goes wrong, you can make your escape by road or by water. The beer garden at Calls Landing offers fantastic views across the River Aire, with the added treat of watching swathes of tourists taking the water taxi down to Leeds Dock. Calls Landing has a rotating range of cask and keg beers from Magic Rock, Siren, Northern Monk and others. And if you get there early enough, you’ll be able to complement your drink selection quite beautifully with a fresh oyster or two – the perfect aphrodisiac. 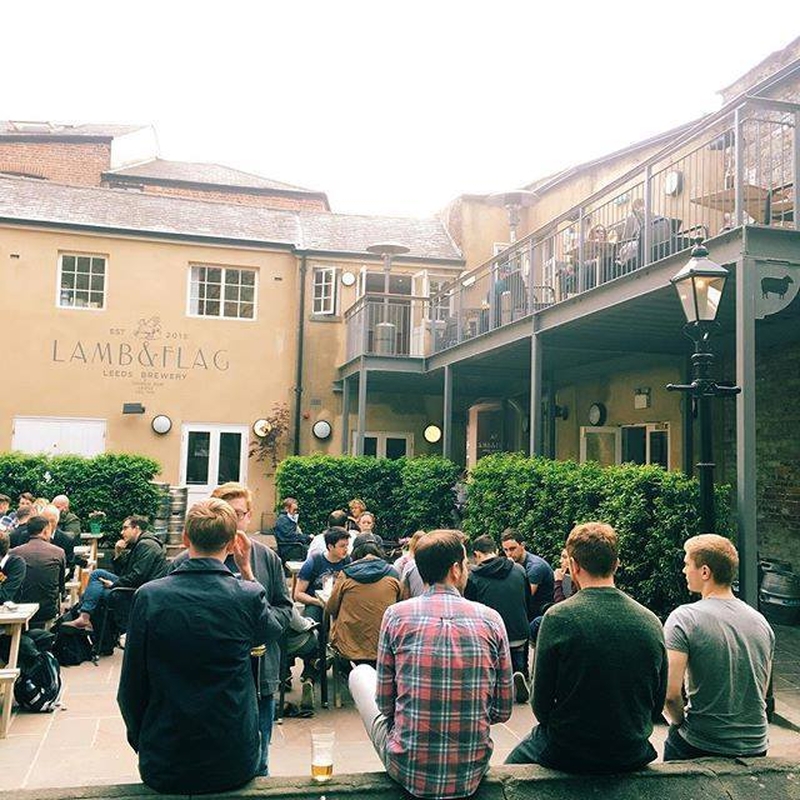 Have you ever seen a small sheep holding a flag? No? Well, you can here… pictorially. And Leeds Brewery’s most recent city centre establishment is also an extremely pleasant place to sit and enjoy a locally-brewed ale while taking in the view of the Minster. If you’re feeling really exclusive, you can even hire part of the pub for a function – and it comes with its own private terrace. The Lamb and Flag has become extremely popular in a short space of time though, so get here early to take your seat and then staunchly refuse to budge. Ever. 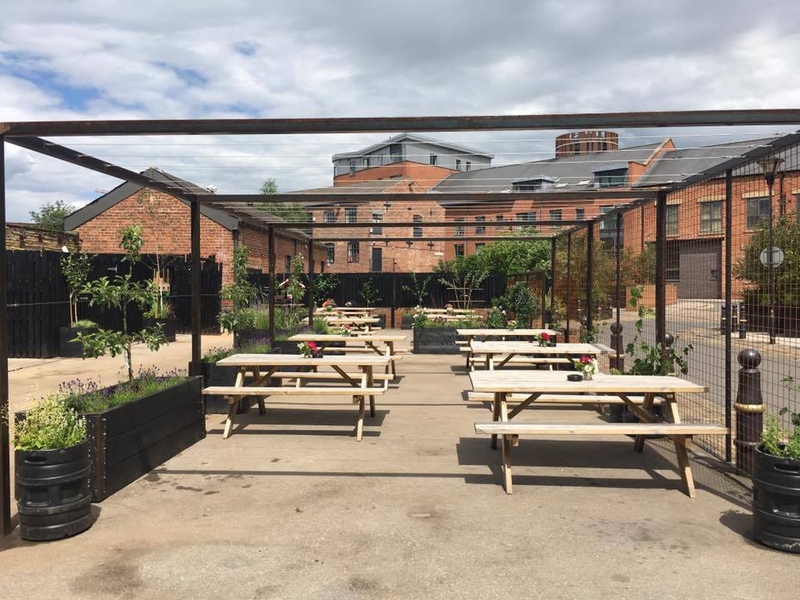 Just around the corner from the Cross Keys, in a stunning grade II listed flax mill, the North is rising. Or at least that’s how their recent crowdfunding initiative was billed. The success of Northern Monk’s fundraising has meant that they will be opening bars in Manchester and London in the near future, but the heart of the brewing lies on Marshall Street in Holbeck, where you can enjoy a glorious pint of Striding Edge – at 3%, perhaps the best session beer in the city, while sitting among the array of climbing plants and potted flowers and pretending that you never have to go back to work again.

Of course, you don’t have to be in the city centre to enjoy a good mosquito bite or two. In fact, some of the most picturesque spots to accidentally have one too many are in the suburbs.. 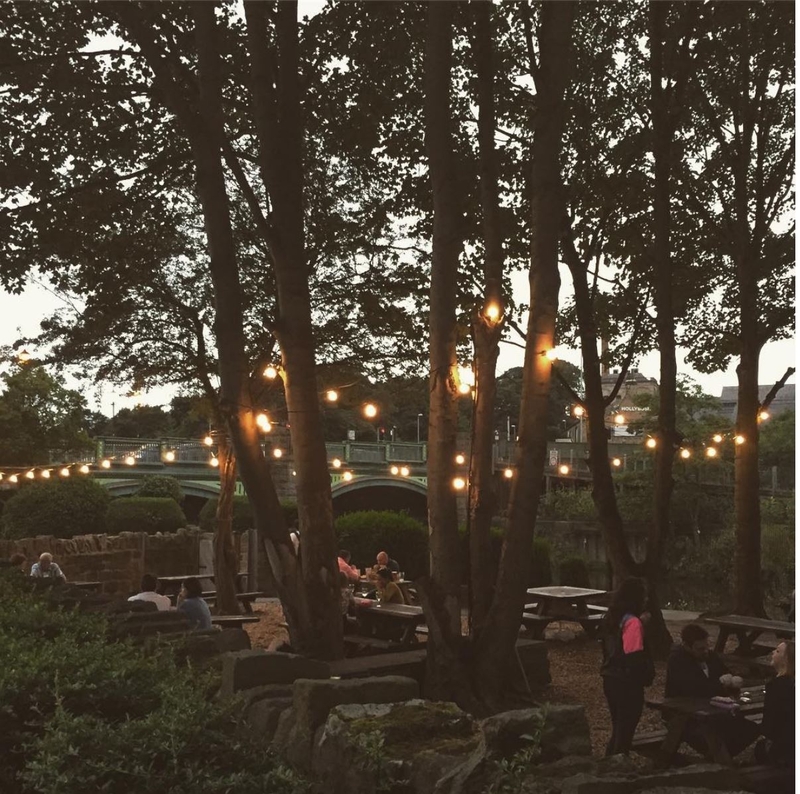 Now accessible by train thanks to the recent development of Kirkstall Forge, the Kirkstall Bridge Inn is a true gem. Great beer and delicious food are complemented by a garden so picturesque that you feel like you’re in a forest. The rushes on the river bank are extremely popular with herons and other wildlife, and you can take a scenic stroll along to Kirkstall Abbey when you realise that you’ve had six pints of ale and need to walk it off. 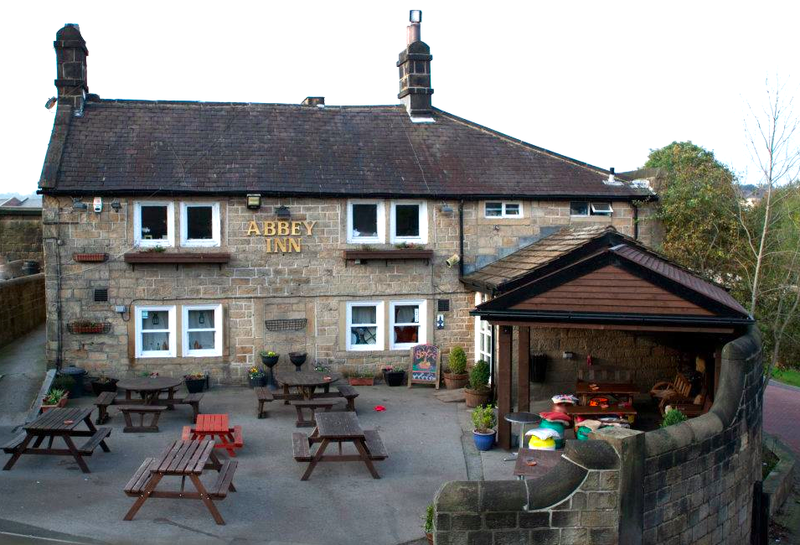 One of the most secluded pubs in Leeds, the Abbey is situated on the River Aire and hidden away by a surrounding forest. The ale selection is an absolute CAMRA paradise and it holds its own three-day beer and music festival every July. You’ll need a map the first time you go, but it’s walkable from Kirkstall Forge train station, Horsforth town street and even via a sneaky back road from Bramley. And you can throw the map away once you get there – you’ll probably never leave. 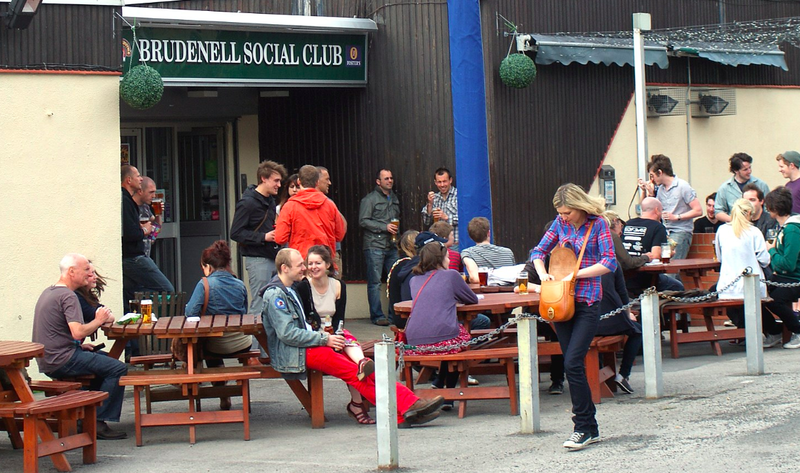 Without doubt the most prolific and diverse music venue in the city, the Brudenell has recently undergone a huge expansion, meaning that there’s now more space for music, booze and outdoor revelling. The beer garden is served by its own pizza bus, and acts as a second home to one of the most diverse crowds you’re ever likely to find. Take the 56 bus from the Headrow and then get a cab home after accidentally entering a beer time warp until midnight. 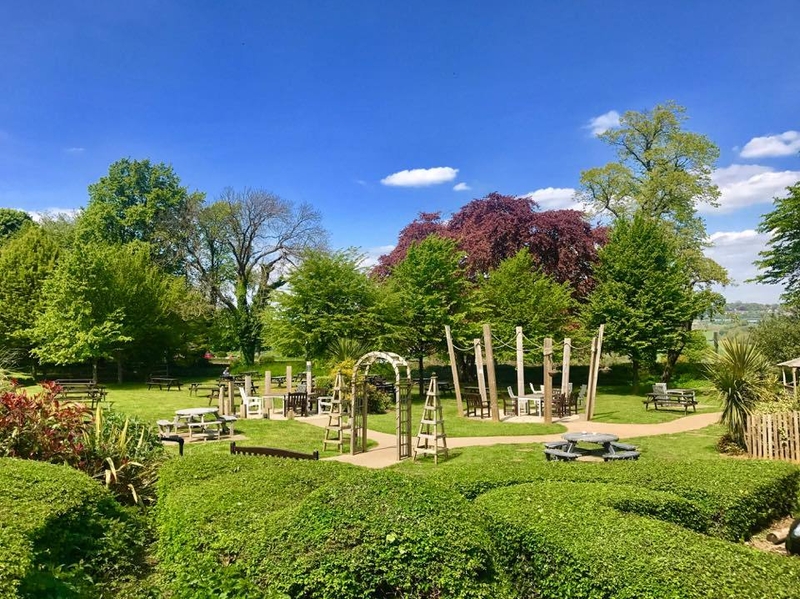 This one’s a bit further out, but trust me, it’s worth it. Not only does the Calverley Arms have perhaps the largest and greenest outdoor area in Leeds, it also offers breath-taking views across the valley to Rawdon on the other side. Gin and Tonic is their speciality, which feels suitable in such lush surroundings. After three or four, you might need a compass and an orienteering qualification to get back to the pub from the bottom of the beer garden, though.

While you're here, we've got 40 more outdoor drinking spots in Leeds right here

Wet February - The best beer, wine and cocktails delivered to your door in Leeds
● / Drink

Your diet may be packed with antioxidants but what about your beer?
What you say
Got an account? Login, to comment/rant.
0 Opinions
Read Next
● / News