We all like a bit of London, reckons Angie Sammons. Or do we?

THE tour guide - oh alright the Blue Badge tour guide - gets excited when I say I am taking her to a Marco Pierre White restaurant on the waterfront.

There are no decent eating places with views of the Mersey, she says, which she can recommend to her daily flock of visitors to Liverpool (apart from the Eggy Ferry pub in New Brighton, but that’s not the point). This could be a brilliant opportunity to change all that.

“Wheeler's of St. James’s - Oyster Bar and Grill Room” sounds grand: so very tradition-steeped, so very London. And we all like a bit of London in our life now and again.

The only other branch is in the capital’s Threadneedle Street, home of the Bank Of England and at the heart of the biggest financial centre in the world. Perhaps it is too fanciful, then, to picture the back-slapping that goes on in Wheeler’s: the dealers, bonus boys and hedge fund managers with Saville Row trouser pockets, cut bespoke for burning holes in. The sort of people, like police officers, who can only hang around with individuals in the same line of work. 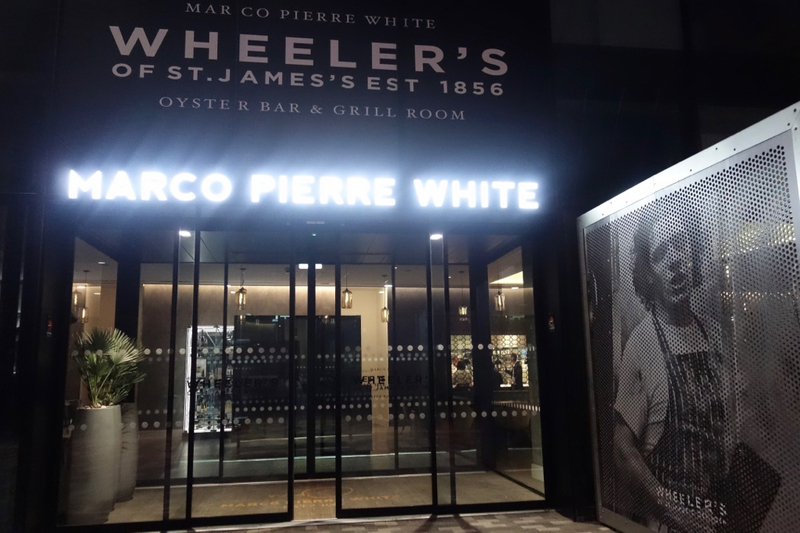 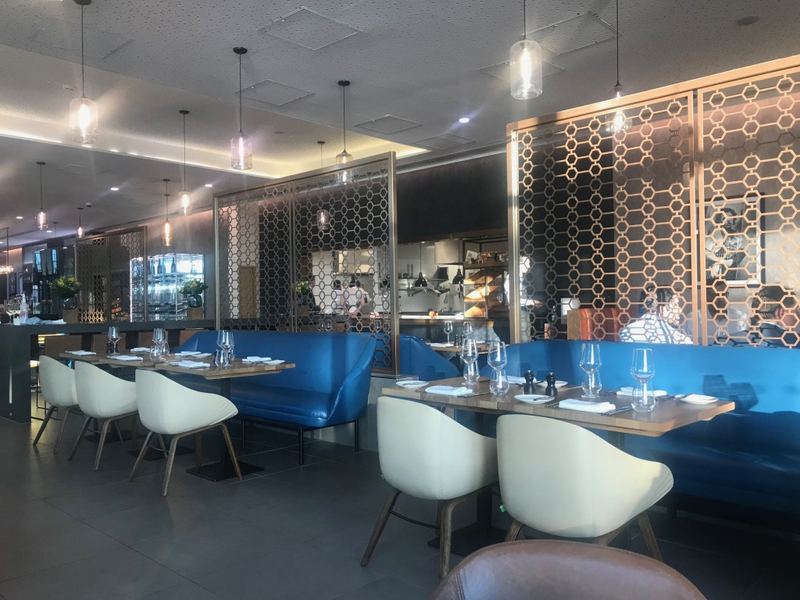 See it’s not cheap and with an eye on the expense-account market, Wheeler’s of St James - brackets Liverpool - makes no concessions, plonked, as it is, in the Pullman Hotel, right next to the Arena and Convention Centre.

“The original Wheeler's restaurant dates back to 1856 and is credited with being the 'world's oldest and finest fish brand’,” the Marco Pierre White website informs us.

Brand, that’s the word that gives it away. In fact Wheeler’s is one of five brands in the MPW portfolio. There’s an Italian “Bardolino” concept, not to be confused with a “New York Italian”, and now and again a "Mr White’s English Chop House”.

Most widespread is the “Steak House, Bar & Grill”, such as the one at the city’s Hotel Indigo, which was having a pleasing up moment when I last went. And it shares many common features with Wheeler’s, the pride in the provenance of the steaks for one, and in the decor, with pictures everywhere of the upstart chef lording it in his Harvey’s Michelin heyday. 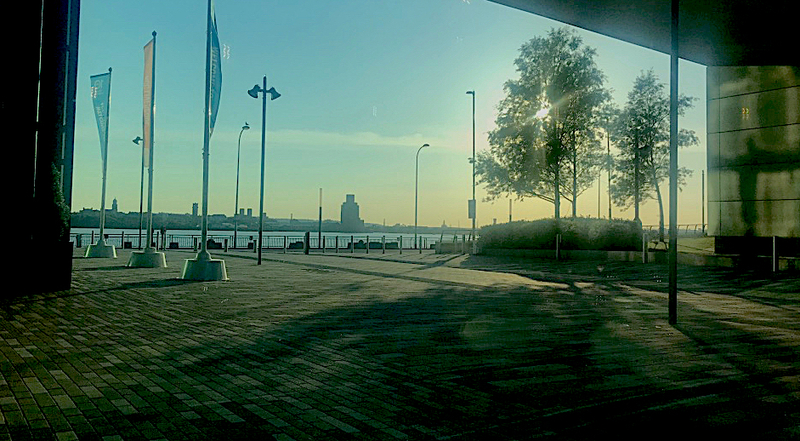 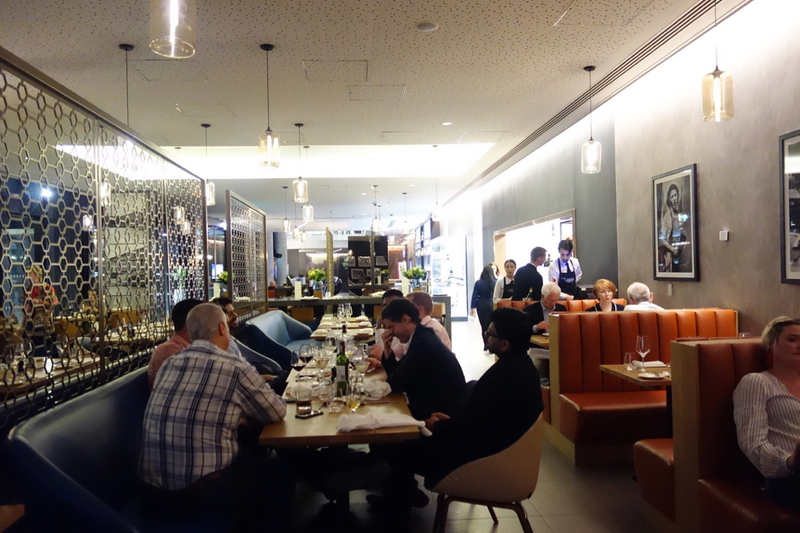 Down at the Kings Dock you could be in any new-build hotel restaurant in the land - the walnut effect MDF in panels and the easy-clean bare tables. Redeeming it all is that promised view of the river framed by modernist concrete angles.

Three Oysters Rockefeller (£8.50) hide under a vivid green sludge of what seems to be predominantly parsley, baking having rendered the molluscs minuscule.

The seafood in the retro prawn cocktail (£9.95) is not much bigger, but at least there is more of it, the Marie Rose sauce pale and subtle and a big fat muslin coated lemon reminding you that the dish, said to have been invented by Fanny Craddock in the 1960s, is still capable of turning a trick.

Wheeler’s classics - such as Plateau Fruits De Mer at £90 - makes one wonder if a quick Ryanair to enjoy the same, somewhere in continental Europe might make more financial and spiritual sense. On the other hand, maybe punters who actually do fork out for all this out of their own pockets are those who believe the Great White himself is in the kitchen (and apparently some of them really do).

The mystery fish of the day, crab in the shell at just £10, therefore sounds like the bargain deal of the century, but as the Yorkshireman himself might tell you, you don’t get owt for nowt. The shell has been roughly hewn open to resemble an extra wide size 11 Croc belonging to a person with oedema issues. The filling, finely ground flakes of crab meat, baked with parmesan and breadcrumbs is pretty modest in flavour and quantity, not saved by some very ordinary chips and a bowl of peas fresh from the freezer.

The promising sounding rump of lamb and cockles is, we are informed, ten minutes after ordering, off. Thus, having not done the steak thing this year and always getting asked about where to get a good one, we procure a ribeye with béarnaise (£29.95). With that fine, 35-day aged, grass-fed Scottish beef from the Duke of Buccleuch’s estate, what could possibly go wrong?

Instead of the requested medium rare, it comes incinerated, not just charred but tasting of bitter soot. It takes a special skill to ruin a piece of lovely flesh for others, as I am sure Melania Trump would concur, and my great sadness is that some proud beast has been pampered and led to its fate, only for its existence to be erased from the cosmos with such indignity.

Yes, we can have a replacement, if we want, but will take a while, we are warned. We press on, dousing this dead open grain in not enough béarnaise to see if we can revive it. It is beyond help.

A dangling bunch of “roasted” vine tomatoes taste of nothing a quick few minutes in the microwave couldn’t achieve. The “triple cooked” chips (different chips to the ones with the crab) have had a long day.

Trifle Wally Lad (named after a chef at the Connaught many years ago) is one of Marco’s signature puddings; sweet and creamy enough to take the offence away.  But that is off too, so we end up with one poached pear (£6) and two spoons. Sitting on a passionfruit sauce with a set vanilla cream, the promise is dashed by two seams of brown running through the inside.

In the end, they knock 20 percent off the bill as well as the mandatory - “discretionary" - 12.5 percent tip to sugar the blow of what would have been a total approaching £140 (inc a couple of lemonades and three glasses of wine).

I have no desire to get on some high horse about Marco and stock cubes and selling out and all that, but someone has got to care and if not him, who?

He might have been fondly known as the enfant terrible of cooking, but much of this was just terrible.

As for the tour guide, the search goes on.