10 brilliant things to do in Liverpool this October

Plenty of comedians have a reputation for danger and unpredictability, but it can sometimes seem more like a deliberately cultivated stylistic twitch rather than the outward symptom of inner rage.

Not so with Jerry Sadowitz, whose deft combination of comedy and close-up magic – he is one of the best sleight-of-hand practitioners in the world – has been torching audiences’ sensibilities for almost 35 years.

While many of his contemporaries on the ‘alternative’ comedy scenes of the 80s and 90s have long cosied up to the establishment, Sadowitz’s free-roaming fury means that a seat on a Radio Four panel show will never be his for the taking. But Just a Minute’s loss is the fearless comedy fan’s gain, and a ticket to see Sadowitz at the Epstein could be a passport to a very dark world indeed.

Well placed to act as a dry run for Hallowe’en this year, the Mega Liverpool Horror Con is the perfect playground in which to test drive your costume of choice. Whether you choose to go as Anderson or Rotherham from The Mayor Which Project, or a character from the station refurb fear fest Nightmare on Lime Street, this gathering of the ghoulish will be a real weekend horror show. (A bit like the Hope & Glory Festival then?).

As with its comics-oriented cousin, the Horror Con promises a line-up of not-exactly-household names who will be scribbling their signatures in return for hard cash, including Laurence Harvey from The Human Centipede II, Ari Lehman who played Jason Vorhees in the original Friday the 13th film, and Damien Thomas from the 1971 Hammer movie, Twins of Evil.

Organisers say there will also be plenty of exhibitors, traders, panel discussions and entertainment, including six themed Halls of Horror, and non-stop film screenings in The Slasher’s Den.

As gruesome as Saturday night on Mathew Street? Probably not, but potentially more fun.

In the Peaceful Dome | Bluecoat | From Fri October 13

Back in 1931, visitors to the Bluecoat paid sixpence to troop through the gallery and get a glimpse of Jacob Epstein’s Genesis, a marble carving of a pregnant woman that was regarded as Britain’s most controversial sculpture. This month, that same artwork returns as part of the venue’s 300th anniversary celebrations.

In the Peaceful Dome is conceived as the finale of the Bluecoat’s celebratory year, a wide-ranging and ambitious show that promises to “bring together historic and contemporary art, new commissions and archival material, to set up conversations across time”.

Epstein’s Genesis will no doubt be a highlight, but the show also includes past work and new commissions from a variety of artists around themes of “transformation, continuity, time and time travel”.

It seems unlikely that today’s visitors will be as shocked by a sculpture of a pregnant woman as they were in the 1930s. Although add a breast-feeding baby and the Daily Mail will be all over it.

It has been whispered within earshot of this column that Liverpool has “too many festivals” these days (it definitely does, ed), and it’s true that disparate events with the loosest connections do challenge the definition of the ‘F’ word. The danger is that the city begins to suffer from festival fatigue, but when it comes to fiercely focused festivities like the Liverpool Disco Festival, we can only say the more the merrier.

Which is just as well, as this is the LDF’s second event of the year, having already linked up with Southport Weekender back in May to deliver a fine line-up of legends.

For this October iteration, the focus is on celebrating the heritage of the Salsoul and West End labels, with live appearances by Linda Clifford, Julie McKnight and Ron Carroll, and DJ stints from Dimitri From Paris, Jellybean Benitez, John Morales and plenty more.

With such a celebration of NYC’s disco spirit raging hard here in the Baltic Triangle, we can only hope that the Big Apple returns the favour sometime soon. Anyone up for the New York Scouse House Festival next year?

Although seeing a film on the Philharmonic Hall’s authentic 1930s rising cinema screen is a unique city treat, it never seems entirely appropriate when the film in question is a full-colour marvel of today’s CGI generation. The mismatch between the modern-day movie and the historic surroundings seems to nudge reality a little off kilter.

Far better to settle down to a true olden days classic like Casablanca, and even better when the Royal Liverpool Philharmonic orchestra is also in attendance to provide a live film score.

Set in wartime North Africa (and rushed out in 1942 to take advantage of publicity surrounding the real-life Allied invasion), Casablanca stars Humphrey Bogart, Ingrid Bergman, and some of the most well-known lines in film history.

With the full orchestra delivering the music, it’s likely to be a sensory experience to remember. And then whatever happens in the future, you can tell people you’ll always have Hope Street. 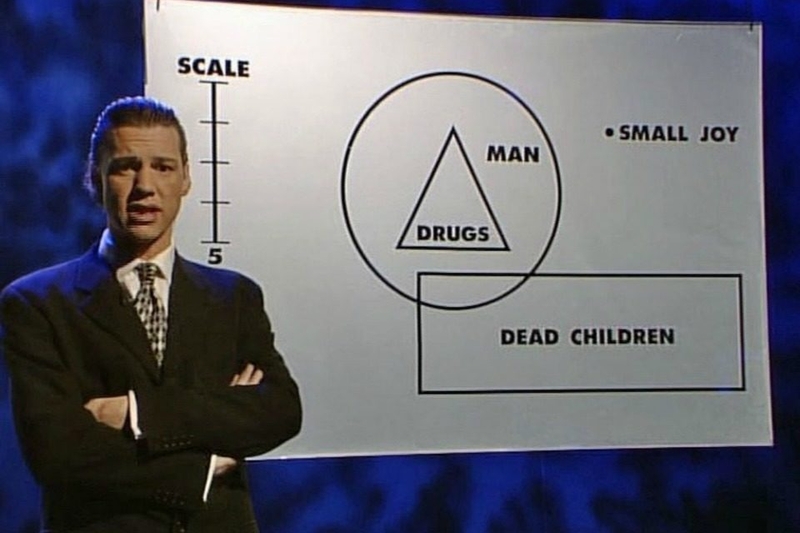 For connoisseurs of TV comedy, the 1997 series Brass Eye is something of a special case. Its six immaculately conceived episodes (plus a one-off special) were like current affairs programmes beamed in from a very-slightly-altered reality – a kind of Newsnight Through the Looking Glass effect – and though it was extremely funny, it was often so weirdly believable that it didn’t actually make you laugh.

And that’s meant to be a compliment.

Alas, Brass Eye’s publicity-shy creator, Chris Morris, won’t be in attendance, but the event apparently has his blessing. And for anyone who remembers the show’s straight-faced take-down of celebrity soundbite endorsements – and so much more – it’s likely to come as a welcome kick in the Shatner’s Bassoon.

Who didn’t love Stranger Things on Netflix? No one, that’s who. Its blend of unabashed 80s nostalgia and 21st century supernatural horror stirred up much love across the generations, with the result that anticipation levels for the imminent second series are stratospherically high.

And what better way to get into the mood than by throwing yourself into the Strangest Things party at the Invisible Wind Factory, a night that promises wall-to-wall 80s vinyl (that’s records, not wipe-down floor coverings) with 80s horror fancy dress and “new twists and surprises”.

It’s even claimed that the Strangest Things night is endorsed by Lucas and Dustin from the show, despite them being fictional characters. Quite where this event sits in regard to official licensing is not entirely clear, but as fan fiction brought to life, it looks like a suitably strange heap of fun.

Back for its 15th year, the Liverpool Irish Festival is a fixture on the city’s cultural calendar. This time round it’s asking “What does it mean to be Irish?”, with answers (presumably) coming in the form of “art, culture, performance, film, music, literature, food and drink, talks and tours”.

We all know that if something isn’t broken we shouldn’t fix it, but if that approach always applied to the arts, Romeo and Juliet would never have become West Side Story. Tinkering with a classic can reveal the original in a new light. Or it can just break it, obviously.

It doesn’t look like this Giselle has been broken though. In the hands of Akram Khan, the famous romantic ballet is reimagined as a story of migrant workers being cast out from their jobs at a condemned garment factory, and while topical updating can sometimes go awry, the show was acclaimed as a future classic when it premiered in 2016.

This four-night stint at the Empire offers a rare chance to catch it in the UK this year.

Sets and costumes are by Tim Yip, the designer on the film Crouching Tiger, Hidden Dragon, promising visual glories to match the elegance and power of Khan’s direction. Music is by Vincenzo Lamagna, adapted from the original score.

Some cynics may work themselves into a demonic frenzy by railing against the ever-growing popularity of Hallowe’en, but the choice of activities on offer easily beats the half-hearted apple-bobbing that was once the peak excitement of All Hallows’ Eve. A grisly night of gruesome theatrics is one such modern-day treat.

Liverpool’s Lovehistory theatre company has been making good use of the hidden reaches of St George’s Hall over recent years, and their 2016 Hallowe’en event was a huge hit. This year they promise it will be “bigger and better”, leading audiences on “a voyage through the dark, cold passageways and eerie cells of the Lime Street landmark”.

Using the cellars and catacombs as a backdrop to their immersive brand of storytelling, Lovehistory say it’s a show “for real fans of horror”. In time honoured showman’s style, they warn that the event is “not for those with a nervous disposition”, adding that “it may contain language and content that will offend”.

Though to be fair, apple bobbing could get pretty brutal too.