When is an egg not an egg? When it’s a “vegg”, of course. On my plate is something that looks, sort of, if you squint a bit, like a poached egg. This “vegg” is the crowning glory of a Veggs Royale (£10.50) - a vegan iteration of the poshest of the benny bunch - that also utilises thinly sliced, smoky cooked carrot in lieu of smoked salmon and a saffron-yellow cashew “hollandaise”.

It’s topped, unlike any other Eggs Royale I’ve had (and I’ve had too many to mention) with sprinkled seeds - a wholesome step too far for me. No seeds on my Eggs Royale, mate. I also prefer my breakfast spinach wilted and nicely seasoned with a wink of nutmeg rather than in its leafy fresh form as it is here. However, these minor grumbles are all overshadowed by that mind-bending, surrealist not-egg.

It's ice-cold, fruity but not too sweet and tastes like I think Hawaiian Tropic sun lotion would

Yes, I’m in the type of plant-based cafe that tries to recreate traditional animal product dishes. The difference at The Vibe is that it’s not all belly-bloating seitan, unhealthy lashings of coconut fat and inexplicably rainbow-coloured burger buns as if Ronald McDonald's hippy sibling had drawn up the blueprint for vegan food. The food here really is, as the ubiquitous neon sign on the wall says, plant-powered, whole food.

We’d had a few too many cocktails at Berry & Rye the previous evening, so we were looking for something greasy to soak up our shame. On that front, The Vibe is a buzzkill.

There’s hardly a chance to throw salty, processed anything down your neck here. Even when you get The Big One (£11.95) AKA a full English, which features vegan sausages, tofu scramble and homemade beans as well as Savoy cabbage, hash bites, tomatoes, mushrooms and toast, you can’t help but feel you are doing yourself some good. Damn it.

Nothing here is cooked in oil and everything is fresh and lovingly put together. The bread's thick-cut but fluffy and light - and crucially, it all tastes really good.

That’s The Vibe I come away with: good. It’s a good place, full of good people, serving food full of goodness. It’s not sanctimonious. Apart from the neon signs, you might not notice it was a vegan cafe if you wandered in off the street, it looks like somewhere your mum would stop amid a department store heavy shopping trip. A huge, modern space over two floors with a glass counter full of tempting, fresh food, just some of it imitating its evil non-vegan twin. No tie-dyed mandala flags in sight.

An oat milk flat white (£3) keeps my other half happily caffeinated while I try to undo the previous night’s misbehaviour with a spirulina-green smoothie (£4.95). It's ice-cold, fruity but not too sweet and tastes like I think Hawaiian Tropic sun lotion would.

Apparently, when The Vibe opened, its owner spent some time chatting to and getting to know the bus drivers working in the depot opposite. I’m told she handed out vegan sausage rolls for free, as a sort of olive branch to her new neighbours. What happened was, that these bus drivers all started coming in for their breakfast. Most of them aren’t vegans, but the vegan sausage rolls passed muster and the service is friendly, so why not? Isn’t that a beautiful thing?

Vegans get a hard time for being preachy and, I can tell you, I’ve had my run-ins with some not-so-friendly ones online. It’s easy to get angry when you’re so passionate about something. I’m not a vegan (this is the part of the review where some commenters will say they stopped reading at - so byeeee to those people), but I am behind the cause both in terms of better welfare for all animals that are sacrificed to feed the world and in terms of the catastrophic environmental impact of the meat and dairy industries.

I, like so many people, want to cut down drastically on my consumption of meat and dairy but am unlikely to knock them on the head altogether. Getting mad at me for that is only going to raise your blood pressure.

Places like Vibe, that gently encourage a few small changes to people’s habits: a meat-free Monday (“you can do it right now please”), the odd vegan butty for lunch, a Salvador Dali-esque Eggs Royale illusion in lieu of your usual hangover breakfast, they are doing the lord’s work without the need for preaching - and they will gain more disciples that way too.

So what’s in a vegan poached egg then? The dewy-skinned, beaming woman who serves us is a little cagey, not wanting to give us the full (free) range of ingredients. That would be telling chef’s secrets, and even though she has no idea we are here to write a review, it wouldn’t do.

With a little charming though, she cracks, revealing that the white is, predictably, tofu-based, while the interior is pureed root veggies (you can probably hazard a guess) and secret spices that include black salt - that sulphur-scented stuff you can get from health shops. The chef’s a little too light-handed with that black salt for me but there are little grinders of pink Himalayan rock salt on the table if you need more, a fitting touch. Vibe also does a “fried vegg” which is made with a rice-based substance and sort of air fried.

Does it taste like a poached egg? Not a bit. But it does taste good, it’s fun and it’s dead clever. We leave with our hangovers dissolved like Alka Seltzer in a glass of water, feeling fuelled up for a wander around The Beatles Experience - just call us John and Yolko. 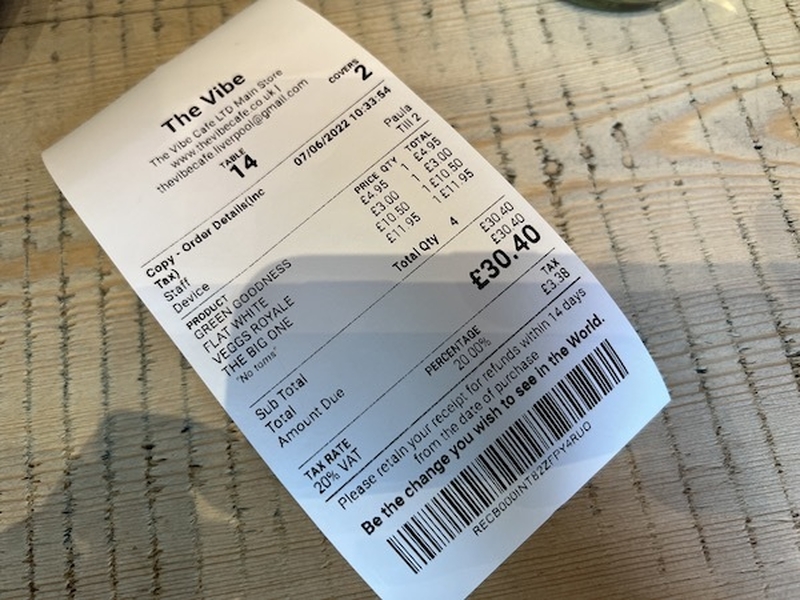