Just weeks after the grand opening of Duke Street Market (read more here), we’re taking a virtual trip across the Mersey to a Grade-II listed building punctuating the Wirral waterfront. The venue is now home to Woodside Ferry Village - a food and drink market with big plans to shape the future, five permanent vendors, a lively calendar of events and their own signature gin cocktail.

Inspired by cosmopolitan food markets from around the world (and closer to home,) it’s predicted to be a popular addition to the peninsula - and you won’t need any official documents to get there.

At night when the cityscape is illuminated, it’s an amazing and breath-taking site to see

We caught up with the brains behind the project, Graham Maddrell, who told me that the idea came about eighteen months ago when a group of businesses came together to discuss how best to support and rejuvenate an area of Birkenhead. They decided that a food market would be the most effective way to breathe new life into the area and increase footfall. Cue the speedy transformation of the old Woodside Ferry Terminal into a cool, contemporary new hotspot. In the process, the Woodside Area Community Interest Company (WACIC) was created which really, is the soft, beating centre of this socially responsible project. 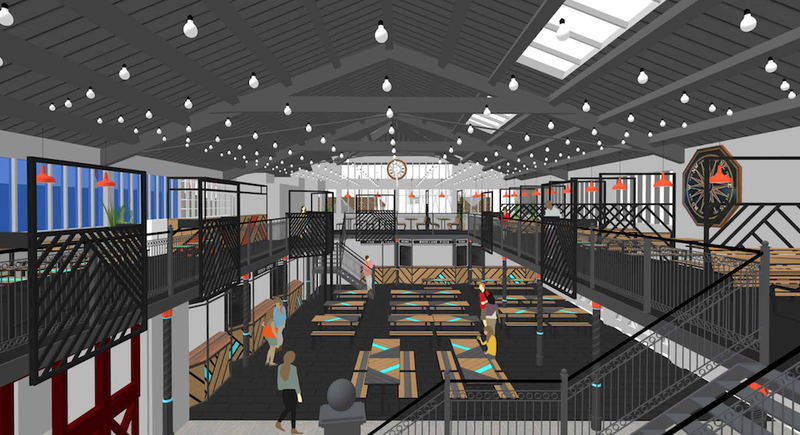 Has the market transpired to be everything they envisioned? ‘There are several areas we will look to develop,’ explained Graham, ‘and this will happen as we move ahead and onto future phases of our overall plan.’ I got straight to the point asking Graham to summarise the five-year plan, but he remained mysterious telling me how they would like to ‘grow, create employment opportunities and support Wirral’s recognition as a key destination and a key player within our visitor economy.’ An exhilarating twinkle of ambition shone through when added, ‘we want to be at the heart in the shaping of this town.’

The Wirral is a blossoming nook of the North West and this is clearly something the Woodside Ferry Village team wants to highlight. Graham went on to proudly boast, ‘we are very fortunate that with Woodside Ferry Village being on the waterfront, visitors can enjoy one of the world’s most recognisable views across the River Mersey to a spectacular UNESCO World Heritage site – the skyline of Liverpool. At night when the cityscape is illuminated, it’s an amazing and breath-taking site to see.’

I was keen to steer the conversation towards Woodside specifically, as it’s a comparatively more underdeveloped part of the Wirral and a far cry from the gated mansions in more affluent areas like Caldy and Heswall.  So why should people choose this sleepy little town over the electric hedonism of Liverpool city centre?

‘It’s our ambition to be a catalyst working with other organisations in supporting developments and initiatives which see not only Woodside grow as a destination but will link to other schemes which will have a positive economic impact for Birkenhead and the Liverpool City Region’ he said. ‘We work closely with Woodside Drive-In, a new business that opened just over twelve months ago and has had a massive impact on the area. Woodside is fast becoming a destination to enjoy.’

What might Woodside Ferry Village have to set them apart from their biggest competition - New Brighton’s Marine Street Social, the food and drink market that opened last year, just a few miles along the Wirral skyline? Rather graciously Graham simply celebrated the success and the benefits of the Wirral as an area with people having another location of its kind to choose to visit. There’ll be no more Mackie Mayor-style social media beef it seems so move along, nothing more to see here.

On the subject of beef though, there will be plenty of delicious food being dished out by five full-time vendors. Menus will change seasonally, but dishes will mostly be made up of each brand’s best-sellers. Behind the bar will include a selection of local beers from Brimstage Brewery, as well as the signature ‘Berry ‘Cross the Mersey cocktail’ made using their own Woodside Gin distil, which is currently in development.

Four ten foot storage containers have just been installed outside the building to house a series of pop-ups on a three-month rotation. These have been designed to showcase as many international cuisines as possible, starting with Mexican street food from Low, Slow and Dough who has already taken up residence.The containers will also be used in collaboration with Young Chamber to help support young independents interested in, maybe one day, owning their own entrepreneurial empire.

Current visitors can choose to go for gastro pub dishes at The Refreshment Rooms, or smoked lobster tail at Cowfish Smokehouse, followed by Pad Grapow Chicken from Sukhothai, rounded off with some gelato from Caffe Cream, or pizza from Bacaro later after one too many Woodside Gins. Graham wouldn’t commit to saying what his favourite dish was from the market, but diplomatically sang the praises of all vendors zealously. He wound up by saying that ‘the best way to find out about the food and menus is to come along to Woodside Ferry Village and taste for yourself.’ Fair point, well made.