My friend is telling me how they are about to embark on a fifteen day fast.

They’ve done it before, oh yes. Once you get going, it’s nothing.

You can say that again.

If you really throw yourself into it and give up food, like ALL food, for a protracted period of time, the theory goes that not only will you lose a shedload of weight, but you will have the kind of energy to outperform the Chinese national grid. You will reset your metabolism, they say. Your need for glucose to fuel the body (which you get from food) will be diminished. Instead, mysterious ketones will command your fat stores, powering your every move.

“Well, now about that...”  I say, shifting a little in my leather upholstered chair, wondering if we’d have been better heading to Kimo’s.

But no, we are in The London Carriage Works, a restaurant whose model is classy fine dining. And where, on Tripadvisor, a Greek chorus of commentators occasionally rise up, keyboards and innards rumbling and grumbling. 'You do not want to arrive here hungry,' chides a diner from May 2018. 'A stain on a plate'. 'Please remember that not all of us have recently undergone gastric band surgery, nor are we anorectic (sic) supermodels'.

“Well a bit, last time. But that was over ten years ago. I dunno. Maybe it’s changed.”

Back then, Paul Askew, TV personality, aka the self-deprecating “Porky”, was in charge of what considered itself Liverpool’s highest, high end restaurant. 'Chef patron' - to use the (parent) Hope Street Hotel’s vernacular.

In 2006 the only excess you would find in a typical dinner for two was the £100 compulsory sort. Occasionally followed by a yearning for a chippy before retiring.

On the face of it, little has altered except the rate of inflation and the chef, Mike Kenyon, ex-Filini at the Radisson Blu. Slates for plates still crop up and those dramatic shards of glass, which punctuate the ground floor, aren’t going anywhere soon, apart from floor to ceiling.

As ever, the service marks the place out: efficient, friendly young professionals, knowing and unobtrusive, seeming to take pleasure in their work.

On this visit, their mettle is not fully tested, for the restaurant is sparsely occupied.

To bring us right up to the present, diners at another table are banging on about Brexit, one of them loudly, which causes us to ponder how the booming hospitality industry, its engine largely driven by an army of European workers, will sally forth once we have taken back control of our hors d’oevres.

The food also has a ring of the familiar but we swerve the full card, leaving it to those with expense accounts or gout. Instead, on this frugal January night, we turn our attention to the fixe price menu - three courses for £29.

Occasional supplementary costs mean it’s not such a fixe after all: a starter of hazelnut-encrusted swordfish, Mediterranean vegetables, chorizo jam and, apparently, clams will cost you £2.50 extra. The reality is a trio of bites, wolfed down in one, the fish meaty and fresh and the sunny colours enlivening the sludge grey crockery like three gay sails on a battleship.

A single nugget of duck breast (honey roasted, appetisingly caramelised) finds company in squirts of this and that - duck liver parfait, another of “blackberry”, candied walnut sprinkles and a communion-sized host of toast. I blink and almost miss it.

And then an open, wild mushroom lasagne, its components loosely assembled on the plate rather than baked il forno, is a pale affair hiding its light under a bushel of greenery. Various kinds of fungi, in a garlic and cream béchamel, nestle within silky quilts of pasta. Ramping up the flavour, fat flakes of dried onion and, of course, lots of Parmesan.

You’ll be needing chips, at least, to go with the sweetish, pinkish lamb rump, its only other allies being a lone leaf of braised baby gem lettuce, a sludge of salsa, two blobs of avocado puree and some decorative tendrils. This handful (£4 extra) are crispy and soft in all the right places, as they should be.

We fail to finish the puddings, but they finish us. A nicely judged blood-orange-curd tray bake and a solid hulk of chocolate torte, which only a sharp raspberry sorbet can cut through, leaves me with that old familiar fine dining feeling of having been shot and not knowing quite how or where.

Naturally crackers and cheese are British artisan - and another £10, so even if we could, we wouldn’t. With three glasses of house wine, two espressos and an added-in ten percent service charge we are already on ninety-five quid.

With the Hope Street Hotel doing so well for guests, I am told by a colleague, praising their breakfasts, to go early in the morning and see how the restaurant performs when the drum is really thumping.

Right now I can’t envisage ever eating again, never mind going back for a while.

Is The London Carriage Works for changing? As the friend quips: “Not so fast.” 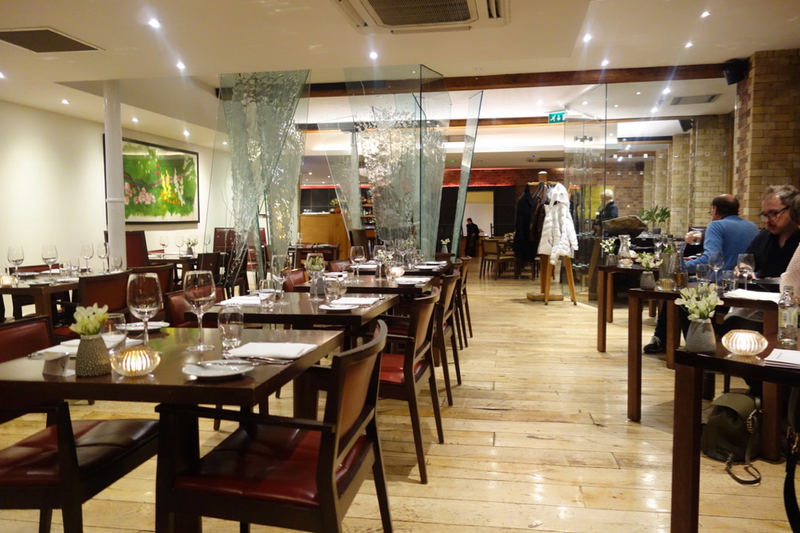