Pork was succulent and well-cooked, with a separate crackling as brittle as a Tory conference pledge

What’s the story? A “traditional pub and restaurant in the peaceful village of Hightown”, The Pheasant promises “freshly cooked food” with “a hint of Northern style”, whatever that is. Cooking has not always been its strong point, but good reports of late sent us off full of hope and empty of stomach

Location, location, location? Look, I heard you the first time. As it happens, it’s handily placed, on the back road into Hightown from Crosby – or Hightown bends, if you’re local – and a stone’s throw from the Formby bypass, all of which may explain why it never seems to suffer.

What’s the appeal? For many, it’s the nearest thing to a country pub without emptying your wallet into the petrol tank. Far enough from the bypass to drown out the Formby commute, close enough for a convenient fuel-stop. With green fields and country lanes, it could be the Yorkshire Dales. Except not.

Its sprawling, whitewashed presence seems to have been around forever but clearly hasn’t. Inside low ceilings and lovely old stone flags give way to identikit rustic pub chain style with carpets, lumps of tree and the occasional quirky lamp.

Who goes there?  If the contents of the car park are to judge by – 4x4s, BMWs, Mercs – not a lot of peasants get in the Pheasant. Families, couples, groups of friends, ages ranging from nursery school to nursing home.

Doing a brisk trade, then? Wouldn’t say brisk, exactly. Service took long enough to provoke drumming of fingers and staring into space, not quite long enough to feel you can complain. By the time the family at the next table were served the younger lad was dozing off with his head on his mother’s arm.

What about the pheasant? No pheasant, but all come with roast potatoes, Yorkshire pudding, veg, roasted red onion and assorted trimmings.

And if you consider meat to be an abomination? Then it’s a fig and dolcelatte nut roast (£10.95) for you.

Ready to start, are we? We are. They’re not. When it does come, the rocket atop the garlic pizzette (£4.95) has wilted more than the young man at the next table. The thin and crispy baked round of dough is parched and largely devoid of garlic (4/10), alongside a bowl of decent, fleshy, bright green, stone-in Nocellara olives (£2.95, 6/10).

The Trio: A huge chicken supreme (7/10) – breast plus wing bone – crisp of skin and moist of flesh, dominated the plate. Pork, one slice (7/10) was succulent and well-cooked, with a separate crackling as brittle as a Tory conference pledge; plus one slice of the beef.

Spuds-u-like? Potaotes are roasted in goose fat, according to the menu, though we wouldn’t have guessed. Dense, tired and devoid of crunch. (3.5/10)

Yorkshire pud: A great Yorkshire pudding must come sizzling and glistening, straight from a blistering oven. These specimens appeared to have been hanging round longer than us. Big on quantity, low on quality (4/10). 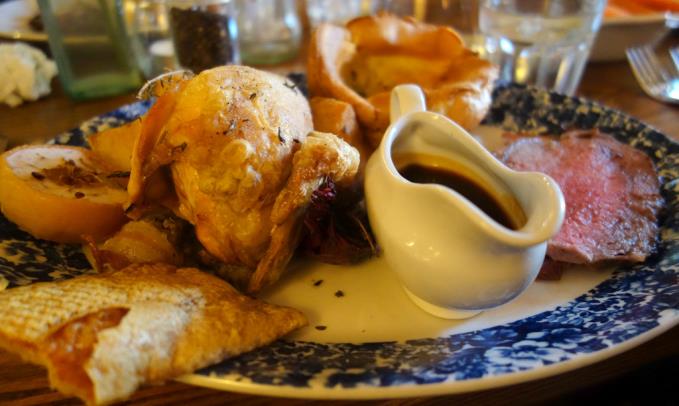 The gravy: A generous pool or, in the case of the trio and nut roasts, in its own little jug, the latter with added onion. Dark, the density of single cream, decently robust, it won’t win any rosettes but did the job (5/10).

The veg: "Honey roasted” carrot batons had an oddly uneven texture, a mound of white cabbage lacked due care and attention, roasted red onion could have done with a little more caramelising (3.5/10).

The rest: Lemon and thyme stuffing enlivened with bacon bits (7/10) came with all except, thank goodness, the nut roast which was accompanied by a rather plain roasted half of Bramley apple (3/10).

Happy ever afters? The House Sharer (£10.95) is basically an assemblage of various desserts from the list: baked New York style cheesecake is unspectacular but far from offensive; a well-made brownie had a high squidge factor; a citrus-packed lemon tart; and, best of all, a wodge of bourbon ice cream sandwiched between two home-baked cacao-laden cookies (7.5/10).

That’s quite a plateful  Actually it was served on a black floor tile, which, like everything else, took a little too long to arrive. Still, better slate than never.

Something to wash it down? It’s not exactly staggering distance home – to anywhere – from here, and a wobbly cycle around the bends on a dark night will at best end in a muddy ditch, at best under the wheels of a 4x4/BMW/Merc. Hence the full car park and extensive soft drinks list, including cherry and hibiscus fizz and an alcohol-light (0.5%), politically-charged Brewdog Nanny State.

What about the non-driver? Not me, you mean? For her, a “perfect” pint of Sharp's Atlantic IPA (£3.45 )and a glass of reed-thin Cooper's Select Tempranillo Cabernet (£5.10)

Do say: Pass the mint sauce. 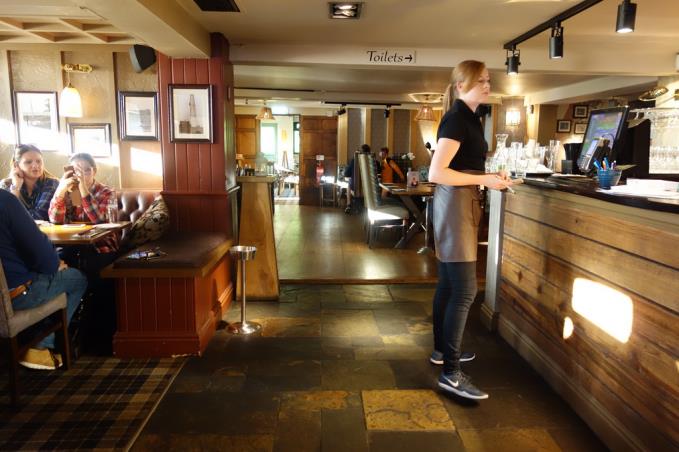