A historic Liverpool street is the first in the city to have a plaque installed which explains its links with slavery.

This reminds us that Liverpool is truly a world city, with the labour of Africans and people of African descent being a key part of our story

The bronze plaque close to the World Museum on William Brown Street explains the history behind the street name and its origins with the slave trade. It is the first of around ten streets which will become home to an “Eric Scott Lynch Slavery Histories” plaque - named in honour of the activist and historian who passed away last year.

Eric Scott Lynch spent his life drawing attention to Liverpool’s links with slavery and through his family, he played a key role in identifying which areas of the city were directly linked with the slave economy and the growth of the city.

These include streets named after slavers or places connected with the trade, as well as those located in areas that frequently feature in current walking tours of the city. The addition of the accurate historical reference would add to the heritage experience of visitors as they explore our streets.

A list of streets was originally submitted by Laurence Westgaph - historian and founder of Liverpool Black History Research Group. Some of the streets under consideration include Falkner Street, Bold Street, Parr Street and Colquitt Street.

The locations will be announced in the coming months once the complex process of identifying suitable areas, then obtaining permissions - and in some cases seeking planning approval - is completed. It is hoped they will all be in situ in the next two years.

Andrew Lynch, Eric Lynch’s son, said: "These plaques stand testament to the educational work that my father Eric Scott Lynch carried out. Over many years, he strove to give the people of Liverpool a deeper understanding of the central role the city played in shaping the modern world.

“The enormous wealth generated by slavery and imperial interests built the city into a major trade hub and financed many of the industries that were to become the cornerstone of the industrial revolution. This reminds us that Liverpool is truly a world city, with the labour of Africans and people of African descent being a key part of our story."

Michelle Charters, Chair of the Slavery Streets Panel and CEO of Kuumba Imani Millennium Centre said: “It has truly been an honour to get to the point of the first of many ‘Eric Scott Lynch Slavery Heritage’ street plaques, especially when Eric had conducted hundreds of Slavery History Trail tours over the decades.

"This will leave a legacy in his name to his tireless work he did in uncovering the facts and educating many individuals and organisations of the true involvement as a city, in the transatlantic slave trade and its impact on the growth of Liverpool from the 1800s.

“It was especially moving that unfortunately, Eric did not get the chance to see this first plaque, but we as a panel, are happy to collaborate and conduct the work on his behalf, working closely with his son Andrew.  I thank the Lynch family for their collaboration and sharing of their father’s memories and knowledge.”

A Crowdfunder organised by Laurence Westgaph to raise money for a memorial that will commemorate the enslaved people who lived, died and were buried in Liverpool, interred without a marker or without their names, is currently at 98% of its £21,000 target.

Laurence runs regular walking tours where you can find out about the city's slavery history. More info at the Liverpool and Slavery Group on Facebook.

Read next: ‘A nautical food journey to be treasured’ - Barnacle, reviewed 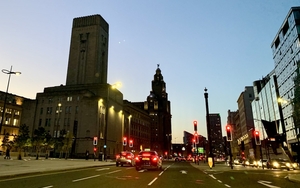