Strawberry Fields Forever: it was 50 years ago today

With scissors and sticky tape a song was born, 'spun from the spores of the air'. By Damon Fairclough

WHEREVER you live, you soon become accustomed to the sights and sounds you encounter every day. And if you happen to live somewhere famous, it’s easy to feel blasé about what’s on your doorstep.

For instance, you can bet the Queen doesn’t even notice the Changing of the Guard when she nips out for a pint of milk and a scratch card. And those who live down the road from the Grand Canyon probably walk by unawares as yet another coachload of sightseers speeds past on its way to gawp at that troublesome local sinkhole.

It can be much the same for local residents who wander up Beaconsfield Road in Woolton. They may be lost in a mental whirl of shopping lists and laundry and remembering when to put out the bin, but yards away, there are music fans of all nations paying homage at one of pop culture’s sacred sites.

It took just one song to turn the name of the Salvation Army’s Strawberry Field children’s home into a globally-known, lysergically-enhanced remembrance of things past. And that song, with its wheezing swoon through the years and its drooping dip into the pool of John Lennon’s mind, is 50 years old today.

There are lots of candidates for best Beatles single, but for many people, the double A-side coupling of Strawberry Fields Forever with Penny Lane represents a matchless moment of conceptual perfection. Everyone knows what it is to look back and immerse themselves in lost moments after all. But to do it by combining poetic elegance with groundbreaking sonics and melodies that seem to have hung in the air for all time – well, that’s special.

The scent of memory that perfumes both songs is perhaps surprising considering that both Lennon (who wrote Strawberry Fields) and McCartney (Penny Lane was his) were only in their mid-20s, but less so when you consider how far they had travelled by 1967 – both physically and as artists.

But then wasn’t The Beatles’ entire career akin to a cradle-to-grave journey compressed into a decade? From fresh-faced grins to hirsute introspection, they invented the category of Elderly Rock Statesmen before they were even 30 years old.

As for the songs themselves, both tracks pull in the Magical Mystery Tour hordes to specific south Liverpool locations.

Penny Lane’s shops may come and go, but it remains relatively simple for visitors to divine McCartney’s thought processes from the area’s physical residue. The song is a poetic catalogue, a sepia-tinted photo-journalism of the mind, and by going there, we can project his images over the Londis, the chippy, the wine bar, and find ourselves passing into the Liverpool of half a century ago.

Strawberry Fields Forever, however, is different. To stand on that narrow Beaconsfield Road pavement and gaze at those wrought-iron Strawberry Field gates – with wind-blown leaves swirling round them like ectoplasmic whispers – is to attempt to conjure sense-memories and spectres from the aural soup that Lennon feeds us.

The song seems spun from spores in the air rather than having grown directly out of this Strawberry Field ground. It’s true that this is the world in which Lennon played as a kid, but as most of us remember, the mental spaces of childhood don’t always map onto the physical realities in which we reside.

Strawberry Fields, with its extra ‘s’, is an imagined land of lost memories and found emotions – a dream state in which Lennon explores his own sense of separation from friends, from childhood, from life. It is perhaps telling that although the Penny Lane promotional film which accompanied the single’s release included clips of the real-life location, the complementary Strawberry Fields Forever film – also shot in February 1967 by the same director – contained no such link back to south Liverpool reality.

Like all influential music, it’s hard for those who came afterwards to imagine a world in which Strawberry Fields Forever never existed – in which that mildly asthmatic Mellotron never gasped for air, and the opening melody never lurched over that stomach-churning precipice, and the line “Nothing is real” never propelled listeners down an internal Mersey tunnel of their own mind’s making.

It is too easy now, therefore, to hear its tentative-sounding verses and swirling choruses without considering the imaginative leap that allowed The Beatles and George Martin to create it. Like the everyday magic that happens outside our front door, things can be too familiar to really be seen.

But for mid-60s musicians and producers, the song in its recorded form was another offensive in the musical arms race that was pushing pop culture into the future. Following in the slipstream of Revolver and Pet Sounds, there was no telling where things might go next, and the likes of the Beach Boys’ Brian Wilson had to either do what they could to better it, or go under.

Some of its psychedelic signatures could be said to be accidental rather than crafted by design, but then the greatest moments of artistic insight can often be put down, at least partly, to serendipity. With two different versions of the song recorded to tape – each running at a different tempo – and Lennon declaring that he liked both, the sonically contrasting segments were spliced together using scissors and a little deft knob-twiddling.

From such cutting-room make-do-and-mend, one of the glories of 20>span class="s1"> century art was born.

But perhaps it’s only right that this strange and remarkable piece of music should have been enabled by such prosaic tools as scissors and sticky tape. Because they are the utensils of childhood creativity, of Blue Peter ingenuity – the apparatus that can turn toilet rolls into spaceships and cereal boxes into alternative worlds.

So if you should find yourself walking, or driving, or cycling up Beaconsfield Road any time soon, head full of meetings and shopping and regrets, it might be worth snatching a quick glance at those gates as you pass.

Because they’re a reminder that, as all kids know, the world can be altered from anywhere. And the effects really can last forever.

A SMASHING SINGLE AND A DREADFUL MISTAKE 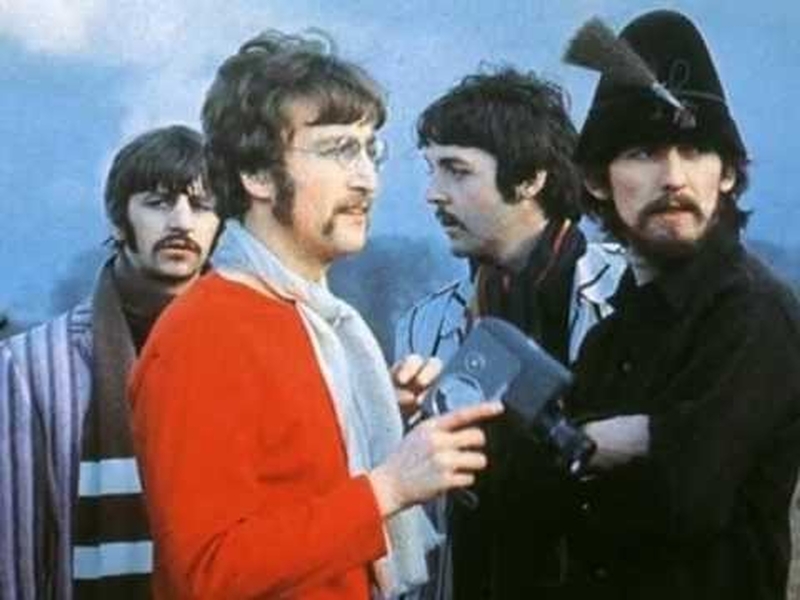 - Strawberry Fields Forever was released in the UK on 17 February 1967 as a double A-side single. It featured Penny Lane on the flip side.

- The song was recorded between 24 November and 22 December 1966 at EMI Studios in London.

- The single reached number two in the UK, being held off the top spot by Englebert Humperdinck’s Release Me. It was the first Beatles single to fail to reach number on since 1962.

- The song features one of the most well-known uses of the Mellotron, a keyboard instrument that used analogue audio tape to play pre-recorded sounds. The Mellotron was originally launched in 1967 and production ended in 1986.

- The Strawberry Fields Forever promotional film was shot in Knole Park in Sevenoaks, Kent. It was made by Peter Goldmann, a Swedish TV director. Goldmann also made films for Penny Lane and A Day in the Life.

- George Martin commented that combining the two tracks into one release made “a smashing single” – but he also suggested that the resulting loss of potential sales was “a dreadful mistake”.