How St Luke's became a miracle on Leece Street

It wouldn’t count as a miracle, but a clean bill of health for St Luke’s church - a monument that stood up to the worst blows of the Luftwaffe and then a half century of neglect - comes close.

The so-called bombed out church is now bathed in a multi-coloured prism of light, whose colour can change at the push of a button - apparently from anywhere in the world, should one be inclined.

The other minor miracle is that the official heritage watchdog, Historic England, has removed St Luke’s from its danger list of buildings and structures, where it has languished for almost 20 years, nursed by a volunteer caretaker and curator who says he has dreamed of days like today.

The early 19th century church, which sits within Liverpool’s World Heritage Site buffer zone, was burned out in the 1941 May Blitz and had been on the register from its inception in 1999.

Since 2001 the custodian of the church has been artist and musician Ambrose Reynolds, who made it his unpaid mission to tend to the one-time crumbling building when few others seemed to care.

That all changed when the city council invited potential operators of the restored church to come forward with proposals and ideas, there was a fear the man who had kept the church dream alive for so many years would be edged out.

Yet against some robust competition from a Manchester-Liverpool clubbing consortium, Reynolds with supporters including Jeremy Isaacs, Paul McCartney and Yoko Ono, won the day.

With Liverpool Organic Brewery supremo Mark Hensby, he now heads a company called St Luke’s Bombed Out Church Ltd which will operate the site for the next 30 years. Its mission is to run the landmark as a distinctive space for arts and community events, supporting the vulnerable and providing opportunities for volunteering along the way. Alongside, an income-generating, commercial programme of performances, private functions and various food and drink festivals.

There are grand plans, subject to lottery funding, to reinstate the balcony in the nave, put mezzanine floors in the vestries and, potentially, a glazed canopy in the chancel with the nave remaining open to the elements.

For now there is the dynamic colour and visual effect changing installation, created by Knowsley based MJ Quinn a “multi-disciplined integrated service provider”. It was commissioned by Liverpool City Council to complete the £500,000 restoration of the 185-year-old building.

Charles Smith, principal adviser for Heritage at Risk at Historic England in the North West, said: “Having been burned out in the Second World War, the Grade II* listed St Luke’s Church was one of the North West’s longest running Heritage at Risk cases. Historic England is delighted to have worked in partnership with Liverpool City Council to deliver the renewal of this great Liverpool landmark, allowing this much-loved building to be used and enjoyed in the future.”

Reynolds says: “I’ve dreamed of days like today. For me St Luke’s has always been a place of beauty and wonder but now with the support of Liverpool City Council and Historic England everyone else will get to see it with a fresh pair of eyes. This venue has so much potential and I’m thrilled to have the opportunity to help shape its future.” 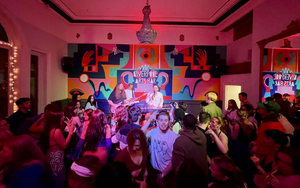