It’s around 40 years since the work of artist Jamie Reid first snagged on the public consciousness. As designer to the Sex Pistols, his record-sleeve images for singles like Anarchy in the UK and God Save the Queen became as integral to punk’s founding myth as safety pins, gobbing and Johnny Rotten’s “I hate Pink Floyd” T-shirt.

But there’s much more to Jamie Reid than this era-defining graphic attack. His work has long explored themes of anarchism, dissent and spirituality, and in a new book called Eight-fold Year, Reid reveals paintings and photographs inspired by “the eight festivals of the Druidic calendar”. 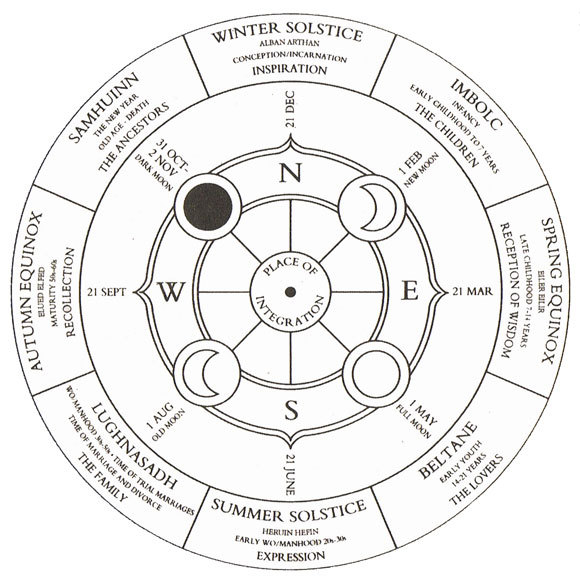 Reid, who lives in Liverpool, will be signing copies of Eight-fold Year at News From Nowhere bookshop on Bold Street on September 21. As the book also includes “explanatory texts” by Philip Carr-Gomm, Chief of the Order of Bards, Ovates and Druids, perhaps it’s no surprise that the signing session has been timed to coincide with the autumn equinox.

In his introduction to the book, Reid explains that the title refers to “the division of the year into its eight essential parts, including the two solstices (the shortest and longest days of the year)” and “the two equinoxes (when the hours of day and night are equal)”. Many of the images in the book have been selected from a series of 365 painted cards produced by Reid – one for every day of the year.

Last year, The Florence Institute on Mill Street in the Dingle – known to virtually everyone as The Florrie – hosted an exhibition by Reid called Casting Seeds. Featuring a variety of works drawn from his career, including collages, murals and a bespoke bedspread, the show was tagged “a real Liverpool Perennial” – a nod to the city-wide art festival of which Casting Seeds was not a part.

As for News From Nowhere, the longstanding radical bookshop has been no stranger to notable signing events recently. Only last month, it welcomed Jimmy Cauty and Bill Drummond – aka The Justified Ancients of Mu Mu – to a midnight “book stamping” and exclusive launch of their novel, 2023.

Unlike the gentlemen of The JAMs, however, Reid is unlikely to arrive at the shop in a customised ice cream van. But whichever mode of transport he chooses, lovers of beautifully-produced art books and fans of his iconoclastic, influential oeuvre will be able to meet the artist between 6pm and 7pm on the 21st. And that leaves plenty of time to get home and mark the autumn equinox in your own special way – even if that just means drawing the curtains, turning up the heating, and having a nice cup of tea.