What’s in a name? I recently went to a house party where the hosts had a dog called Simon. The oddity of a human alias called out with a whistle was further complicated by the fact that Simon was female. When her owner said ‘get down, girl’ under the table, I bet a few guests were barking up the wrong tree, thinking she was the one to hang out with that evening. Simon probably had better breath and less facial hair than me anyway.

I love dogs, but I also like not having to worry whether I’ll step on one after a couple of Mojitos

The owners of Rocket & Ruby might be barking mad too, having named their new restaurant after two of their dogs. Perhaps they just ran out of inspiration after their other places, Bacaro, Salt House Tapas and Hanover Street Social, but this little bit of trivia drew a squishy response from my partner during dinner. “That just makes me love it here even more”, she said, as we hit the mid-way mark of our meal and were already straining at the leash to plan a return visit.

Before I go astray with pooch puns, I should say that this is where the canine connection ends. I don’t know if the owners extend their paw to welcoming furry friends inside the restaurant and it wouldn’t change my review either way. I love dogs, but I also like not having to worry whether I’ll step on one after a couple of Mojitos. The same goes for children. So if you don’t want to end up in the dog house with Fido or Simon then contact the restaurant directly for their pet policy. There’s a good boy.

Rocket & Ruby commands a prime spot opposite Queen Victoria’s monument, in good company among Castle Street royalty like San Carlo, Neighbourhood and The Underground Gin Company, as well as new kids on the block, Heritage, Black Barrel and Rudy’s Pizza.

Unlike Bacaro next door (Italian) and Liverpool ONE’s Salt House (Spanish), R&R has a wider international theme with separate menus for breakfast, lunch, small plates, Sunday brunch and roast dinners. Inside, you’ll find plenty of behind the scenes action, thanks to an open plan kitchen that cycles through plating up and pot washing, working in tandem with the front of house team to provide efficient but warm service with genuine enthusiasm.

Each small plate was creative and complete, firing off with sticky sweet and sour seared cauliflower (£6.95) and a zingy spring onion and chilli garnish that was swept up without hesitation. Char sui pork belly (£7.95) revealed another Asian twist with four delicious slices of slow roasted meat casually reclining on a saucy half plum, inviting us to dip into the hispi cabbage and get mucky.

Braised ox cheek (£7.95) - a much anticipated favourite from the Salt House menu - was succulent, melt-in-the-mouth meat served in a joyous jus with a chunky king oyster mushroom and cavolo nero (that’s kale to me and you). I’m not sure if this dish was Spanish or French influenced, but it certainly radiated a joie de vivre.

I love harissa and was made up that it featured strongly in the green beans with salted ricotta, topped with charred shallots (£4.50), a fantastic combination of tongue-tingling flavours and presented beautifully. Grilled sea bass (£6.95) was another tasty work of art, a crispy-skinned portion of delicate white fish riding a wave of sweet marinated tomatoes, caramelised onions and sea herbs.

Chargrilled ‘flat iron’ steak (£8.95) - the most expensive plate on the menu - looked like it had been put together by a toddler at nursery. Medium rare strips hid under a scattered pile of straw fries dotted with rocket and chimichurri, but the appearance was only a minor distraction from a forkful of flavour that captured all the best bits of steak and chips. Can you imagine all of that inside a warm, crusty tiger baguette? I might have just discovered my new death-row last lunch.

Dessert was perfect; a rich chocolate torte on a crunchy salted caramel base (£5.50) that really did taste as good as it looked. Served with raspberry meringue and ice cream, it was decadent but not too stodgy and the grand finale to a first-class meal for under £70.

On ‘Ruby Tuesdays’ you can get three small plates and a bottle of house wine each for £25. The Acantus Sauvignon Blanc we had was £18.95 so you don’t need Carol Vorderman to do the maths and tell you that’s a good deal. And if you really want to impress your dinner date then show them Queen Victoria’s septre secret on the way home. Like Rocket & Ruby, it’s the dog’s bollocks. 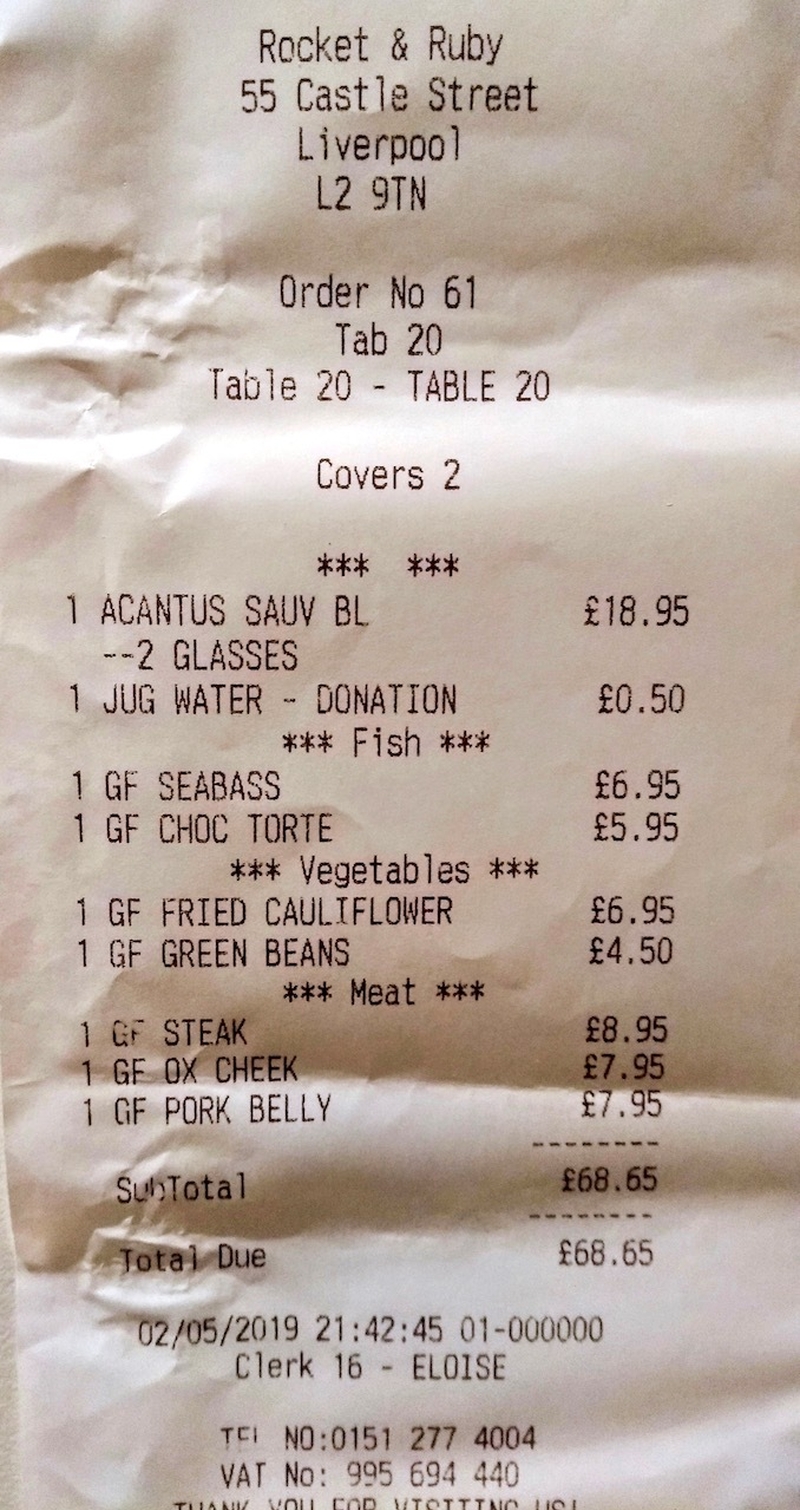