If not for the sign outside, the violently cyan upholstery would have fooled me into thinking this was still a Gino’s. Five of D’Acampo's restaurants around the country were closed and relaunched under the new Riva Blu brand earlier this year.

Veal Milanese claims to be 'crispy' on the menu, but the breadcrumbs on the bottom are completely uncooked.

Riva Blu has set out to continue with the Italian-themed experience. At first look, not much has changed at all. The dining area is an open space with an industrial ceiling, two bars, a kitchen and some sort of deli-station in the centre, made somewhat Mediterranean by the abundance of fake trees.

I’ve only eaten one slice of toast today, so we decline our host’s offer to enjoy a pre-prandial at the dimly-lit, deserted bar just inside the entrance and head straight to our table instead. We ask for a cocktail menu and our first server of the evening smuggles it over like a pack of chewing gum in a school playground, perhaps afraid that the other punters will see what we’re up to and order espresso martinis by the bucket.

I start with a green apple and grapefruit gimlet (£9.15) that’s tart with lime, brimming with basil, and not at all stingy with the gin. In fact, it might be one of the best gimlets I’ve ever had, and I begin to re-evaluate my expectations for Not Gino’s Restaurant. My guest’s grapefruit and raspberry spritz (£9.15) is a little on the sweet side, but it’s a refreshing enough start to the evening.

At this point, I make the fatal mistake of browsing the wine list. A server materialises immediately to take my wine order. I decline with a glance at my full-except-for-a-sip gimlet. Thirty seconds pass and a new server appears with the same question. I close the wine list and endeavour to pick something at random when the food arrives.

Starters. The topping to bread ratio of king prawn bruschetta (£10.25) is skewed in favour of the bread, but the prawns have a distinct char which, impressively, doesn’t come at the expense of shrinking them to buggery. The chilli in the mayonnaise adds a nice subtle kick, but as I chew on a dry crust of bread, it’s clear there’s not enough of it. My guest gets the arancini (£9.25) and the truffle mayo does all the heavy lifting. Without it, the rice balls taste of almost nothing. Thankfully, there’s plenty to go around.

Our game of server-roulette continues with the arrival of the main course. My veal Milanese (£24.50) claims to be “crispy” on the menu, but the breadcrumbs on the bottom are completely uncooked, the meat itself is chewy, and the entire plate is saturated with oil. Even half a lemon’s worth of juice fails to cut through the grease.

I pride myself on my ability to eat almost anything, but I leave half the veal untouched. How do you make such a pig’s ear of a baby calf? On any other plate, I’d consider the pile of rocket and parmesan on the side to be decorative, but not tonight. Unfortunately, I have to pick out whole twigs of rosemary like Christmas trees to get into it.

My guest’s Italian sausage fettuccini (£14.95) is a little better, but the promised flavours of leek, white wine, and porcini mushroom fall by the wayside in favour of heavy cream. Crumbs of poncy sausage aside, it reminds us of our own cooking in student kitchens - and not in a nostalgic way. The wine, at least, does not disappoint. My panic-picked Valpolicella Ripasso (£10.25) is gorgeous, and my guest’s Rose Di Casa Mia (£6.25) pairs well with the richness of her pasta.

To finish, we pick the freshest-sounding dessert to share - a delizia al limone (£8.00) which isn’t overly exciting but works wonders to neutralise the oil sloshing about in my stomach. There are hard flecks of some sort of bitter citrus fruit (presumably lemon) which I don’t mind, but aren’t to my guest’s taste: she pushes them all onto my side of the plate.

As half of the dessert menu is digestifs, we go for another drink – a Little Italy (£8.95) for me, and a dessert wine (£5.75) for my guest. It’s a pleasantly boozy conclusion to a mixed bag of a meal.

We settle up with yet another waiter, reaching a grand total of seven. Or is it eight? We’ve lost track. They’ve been hovering around like seagulls outside a chippy and we take that as our cue to leave. Tonight’s been a game of two halves. It might be worth coming back for a few cocktails and maybe some small plates, but there are better quality Italian restaurants in the city for better prices. 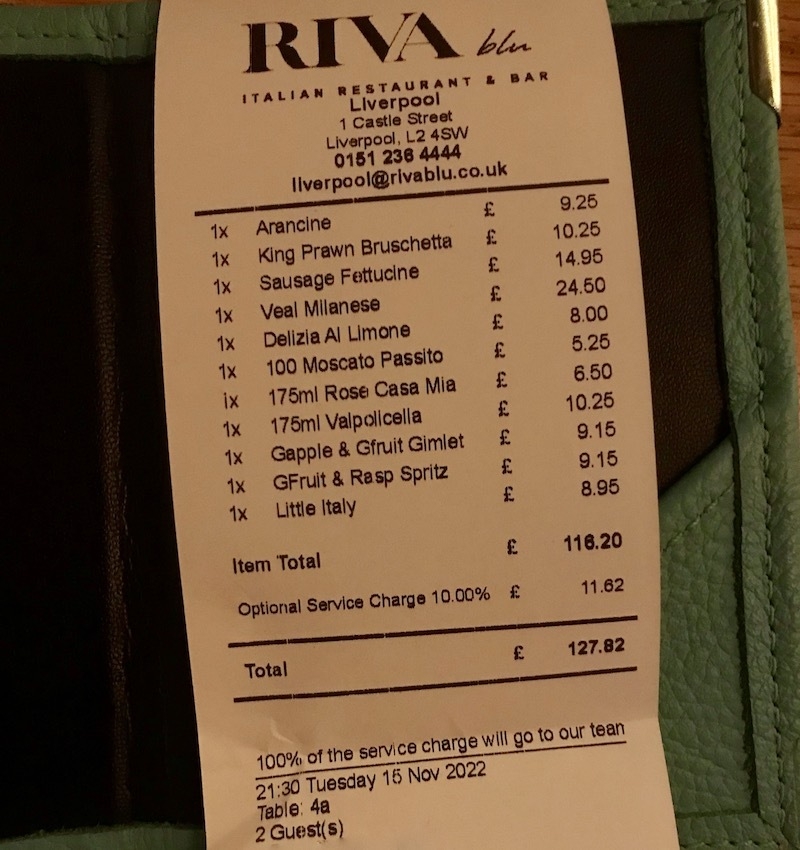