"LOVINGLY derailed", says the blurb for The Massive Tragedy of Madame Bovary! at the Liverpool Everyman.

Given the anarchic and fast-paced comic theatre that is the trademark of the Peepolykus company, there's always the risk that the derailment might turn into a train crash of a show. After all, Gustave Flaubert's Madame Bovary is one of the great tragedies of French literature - world literature, even. Massive indeed.

Back in the 1850s a sympathetic portrait of a woman struggling with an unfulfilling marriage in small-town Normandy was revolutionary stuff. Yet now it is rightly seen as a pioneering classic, a part of the 19th-century literary furniture, whose influence can be detected over and over today.

For all that the show comes across as a mash-up of Flaubert with Monty Python and the Marx Brothers, the underlying tragedy of Emma Bovary remains undiminished

True mischief-makers might feel that the time has come to take Madame B down a peg or two. Yet for all that the show comes across as a mash-up of Flaubert with Monty Python and the Marx Brothers, the underlying tragedy of Emma Bovary remains undiminished.

There are just four in the cast, changing roles and stepping out of role with dazzling speed. Emma Fielding is Madame Bovary herself, and also Emma Fielding the actor, pausing to debate and illuminate the character and show with the rest of the cast and audience.

John Nicholson is Emma's husband, Charles, a distinctly mediocre country doctor blithely unaware of his wife's inner turmoils. Plus he plays himself, out of character, and many other roles. On top of that, he is the co-author, along with Javier Marzan, who, in his turn, plays mainly Emma's succession of lovers and amours.

Everyone else - 12 different roles - is the responsibility of Jonathan Holmes, who switches from part to part so convincingly that, yes, the audience can keep up.

The whole production is directed and marshalled by the Everyman's Gemma Bodinetz, and despite the fact that it was being trimmed and adjusted within hours of curtain up, it actually works.

It's told in flashback, with Nicholson and Marzan getting the comic relief in first. Their energy and timing is spot on as the two rat-catchers arrive in little Yonville and immediately find themselves in conflict with the suicidal Emma Bovary for the only supply of arsenic in town.

Belly laughs punctuate the show like machine-gun fire, but gradually the tale of the frustrated Emma and the nice-but-slightly-dim Charles come to the fore amid the guffaws.

The final scene produced a stillness that showed that sheer acting ability had won the day - although Peepolykus being Peepolykus, there was inevitably a riotous coda to round off the night. 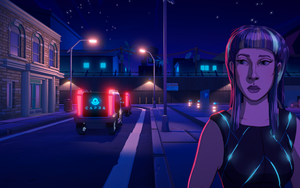 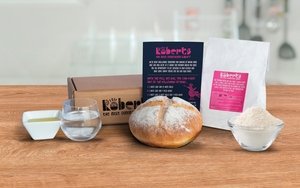 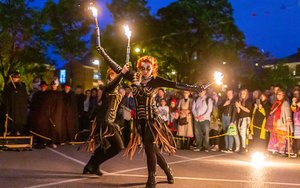 The event due to take place on 15 May will not go ahead, but there...