‘I wonder if Ed Sheeran drew a nob in the toilet’ - River North, reviewed

From the team behind Motel, Teddy’s, and Pogue Mahone, River North comes from an esteemed stable of rock 'n' roll drinking dens. The name might make you think of Seaforth Docks, or the slightly more picturesque Crosby beach where the Mersey meets the Irish Sea, but “River North” is actually a very hip neighbourhood in Chicago.

At the turn of the 20th century, the Chicago district was named “Smokey Hollow” due to the factories and forges. In the 1970s, businessman Albert Friedman started to buy, develop and build properties, attracting artists to the district with low rent. Today, it’s the go-to neighbourhood for art lovers, boasting a wealth of restaurants, nightclubs and cocktail bars.

It’s a story that Liverpool knows well from the regeneration of the Baltic Triangle, Ten Streets and Ropewalks. This building on the corner of Knight Street was derelict for years before getting a new lease of life in 2015 thanks to Neon Jamon (reopening in Allerton soon), followed by the short-lived Wolf & Waffle / Brasserie Loup.

Teetering on the edge of Liverpool Chinatown, River North looks left to the iconic Imperial Arch. On the opposite side of the road is another sister venue, Petit Cafe du Coin, as well as Bunch wine bar, Moiim Korean deli and VietNom. Berry Street finally feels like a destination instead of just a bus route out of the city.

Pitching itself as a “neighbourhood pub”, the menus here cover brunch, Sunday roast and a day and night selection of sandwiches, small plates, big plates and a couple of steaks. What, no deep dish Chicago pizza?

As well as the Windy City connection, I’m obsessed with the fact that Ed Sheeran has been here. The biggest pop star on the planet dropped in for a pint with Tom Grennan after they performed at the arena. I wonder if Ed drew a nob in the toilet, but I doubt he’s that rock and roll.

The downstairs bar is cavernous, softened by a jungle of plants, low hanging mood lights, and smoochy booths. We get seated in the window and order a bottle of Big Drop (£4) and a Nogroni (£6). Top marks for the mocktails and for offering a gluten-free, alcohol-free lager.

Liverpool has become awash with middle of the road eateries. Lark Lane is a prime example, where one fella now owns five “independent” bars that make a living from smashed avocado and triple cooked chips.

River North manages to err on the edgier side with its menu. Obviously, there are gordal olives, hummus, and croquettes, but also baby calamari, corn ribs, and a fit sounding burrata salad (sadly, sold out.)

Padron peppers (£4.50) rekindle fond memories of Neon Jamon, and are up there with the best you can get at Salt House Tapas. Small plates are all reasonably priced for a starter and fried chicken (£6.95) has a good crisp batter, with a generous honey mustard dip for dunking.

At the top end of the menu you’ll pay £28 for an 8oz fillet steak with chips and fifty quid for a bottle of Matthias Warnung Whitey Weisswein. Not that bad for a nice Austrian wine which sells for around £20 from the merchant. If I was Ed Sheeran, that’s what I’d be drinking. But then I'm not very rock 'n' roll either.

My friend, Jo, has gone for the more pocket-friendly option of cheeseburger (£13.95) with French fries and pickles, which I’m told is a solid six out of ten. I agree.

The burger looks good, there’s oozy cheese, a nice brioche bun, and chips that are a little thick to be French, but definitely not those triple cooked things I mentioned earlier. If you had to cook the chips three times then you didn’t do it right the first two.

I’ve never tried a Tomahawk pork chop (£16.95) but this one has got me sold. The fat has been crisped up like proper crackling and it’s an impressive hunk of juicy meat on the bone, served with al dente broccoli and a buttery, garlic mash that’s just the consistency I like.

The honey mustard sauce gives me a sense of deja vu from the fried chicken dip - they wouldn’t serve the same with both, would they? Aside from that, this dish is definitely a standout.

One big problem with the “Big Plates” is the small table. Stools next to the window were fine for starters but me and Jo end up crashing crockery like a pair of bulls in a china shop. I’d have expected a better seat for a dinner reservation.

Aside from that, service has been confident and convivial, without that whiff of arrogance you sometimes get from uber cool bars.

I wasn’t sure how the team behind “dive-bar karaoke” would get on with a full food menu, but even sticky toffee pudding (£6.50) and chocolate fondant (£6.50) are well-presented and well-received. All good clean fun.

River North manages to pull off being a good-time drinking den and a decent restaurant. Pop stars are welcome here, but your mum and dad would like it too. 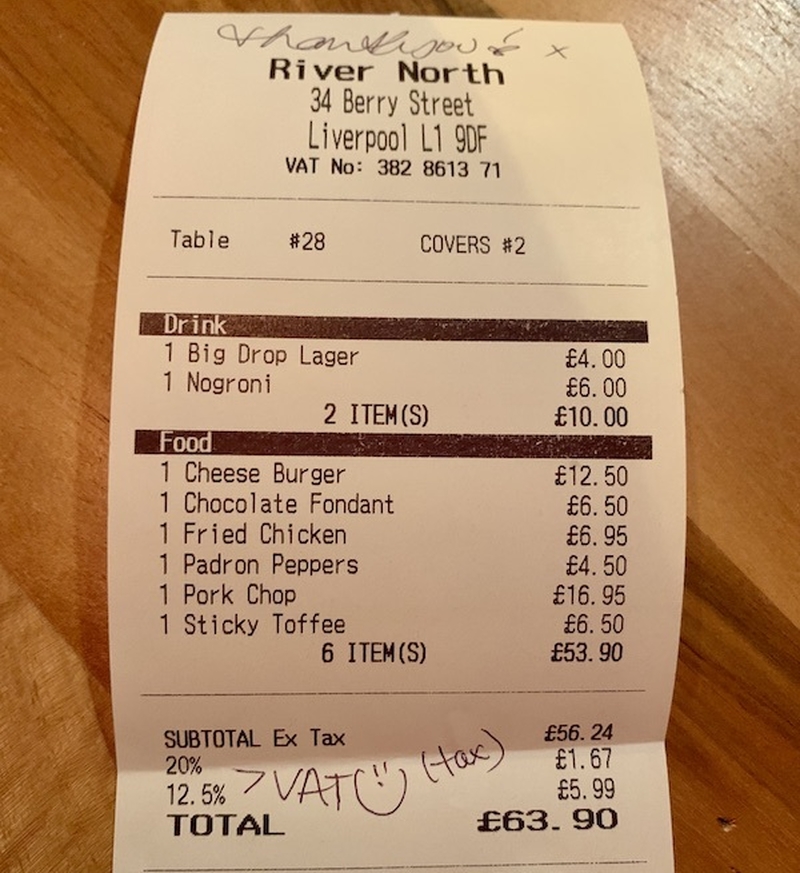