NOT so very long ago, the city centre's most distinctive street was a hostile environment for anywhere with a working kitchen: restaurant resistant, a repast with no future, a din-din no-win.

Few had the necessary to stay on the straight and narrow of Bold Street, once the “Bond Street of the North”. Eat in or take away, it made no difference; shooting stars, they came in a blaze of dash and sparkle, only as quickly to burn and die.

Seasoned fries, which, with sporadic shards of sweet potato, were perfectly OK except the salt appeared to have been dispensed by somebody with a severe form of delirium tremens

One such preceded the arrival of NoLIta Cantina. A sandwich shop not without its critics;  it too is no more. Expired. Brown bread.

How times change. Now you can't move for Italian, American, Moroccan, Korean, Japanese, Chinese, Lebanese. Whether NoLita will be a competer who can say, but it is not the first to ride the culinary tide into Liverpool all the way from the streets of New York.

If a little before eight on a Saturday evening is to judge by, NoLIta may keep the plates spinning awhile. Despite appearing comfortably full, they cheerfully found room for four  amid one of those long slimline spaces that Bold Street architecture affords, making for ease of service and an easy ambience, with tables on two sides and an open kitchen at the end.

The look is what interior designers call industrial and raw: naked bulbs, exposed brick, optics housed in crates stood on end. It used to tell you the bailiffs had been; now it tells you they're cool.

Mood music was likewise industrial and raw, or so our children informed us. Their favourite sort. “Explicit lyrics,” noted the trainee teenager. “That was the F-word, then,” added the nine-year-old. 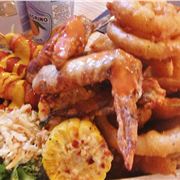 Sharing platter: Mixed by
name and mixed by natureThe impression of ultra cool stopped short of our drinks, which were uniformly tepid, “They've got a magic fridge,” the youngest speculated. His ability to spin a positive bodes worryingly for a life in PR. To be fair, a subsequent glass of wine restored the chilled vibe and, in every other respect, service was top drawer.

NoLIta being the abbreviation of the New York district North of Little Italy, the  menu reflects the culinary journey of the owners: deli sandwiches (turkey pastrami with apple sauerkraut),  starters and sharers such as chilli pops (fried, cheese-stuffed jalapeno peppers), a handful of mains (beef brisket, belly pork), and, the main event,  “smokehouse” burgers, which grow in proportion to the price but what a smokehouse has to do with anything we couldn't see. 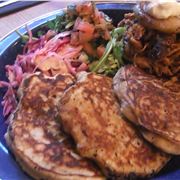 Potato latkisPulled pork needs a long, slow burn, a couple of months over a charcoal pit, alternatively most of the day in a 125C oven, wrapped up tight so the best of it is not evaporated into the ether.

I don't know what medium NoLita's version, “slow cooked in smoked chipotle and local cider” (£9.95), employed, but it somehow gave the impression of being dry and soggy at the same time, with all the moisture on the outside of the meat –  more like a wet mop than the smokey ideal of the dish's southern US origins.

The carbs came in the form of latkes, potato cakes whose centre held an unwelcome surprise; a damp paste of flour and water, the result either of failing to wring all the moisture from the grated raw potato, or undercooking, or possibly both. All of which is a shame because accompanying home-made spicy beans and coleslaw were both excellent and showed what they can really do. 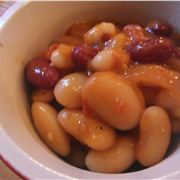 Spicy beansBut then the burgers arrived and suddenly everything was all right: the service, the food, our mood. Some bad burgers lurk in the darker recesses of this city, but not at NoLIta. Made with rough-cut, high-calibre beef, charry on the outside, a happy medium on the inside, these come on a fluffy (albeit now-bogstandard)  brioche bun with toppings that add, not subtract from the experience.

Even the standard Naked burger (£7.55),  topped with leaves and coleslaw, is a double stacker, which, after a substantial starter, is a big ask for two boys who only add up to 21 between them. Accommodating staff, accordingly, brought smaller burgers at a smaller price.

Each came with seasoned fries, which, with sporadic shards of sweet potato for added value, would have been perfectly OK except the salt appeared to have been dispensed by somebody with a severe form of delirium tremens. 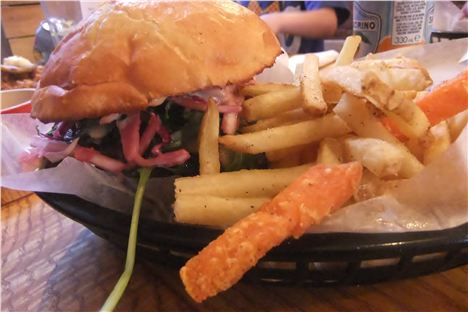 Hard-core gluttons can indulge themselves in a Big Boy (£13.95), a triple stack burger layered with Swiss and Monterey Jack cheese, topped with onion rings, bacon and pickles. 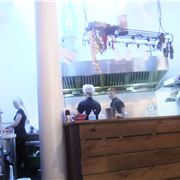 Finding a burger you would be happy to pay money for has recently become less of a challenge in these parts.

How it will fare in this new environment remains to be seen, but NoLIta is pleasant, chilled and friendly to all-comers. What issues we found with the food can all be fixed, but, certainly, we had no beef with the beef.

ALL SCORED CONFIDENTIAL REVIEWS ARE IMPARTIAL. Critics dine unannounced and we pick up their bills - never the restaurant, never a PR company. 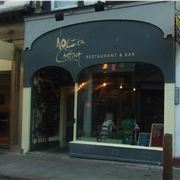