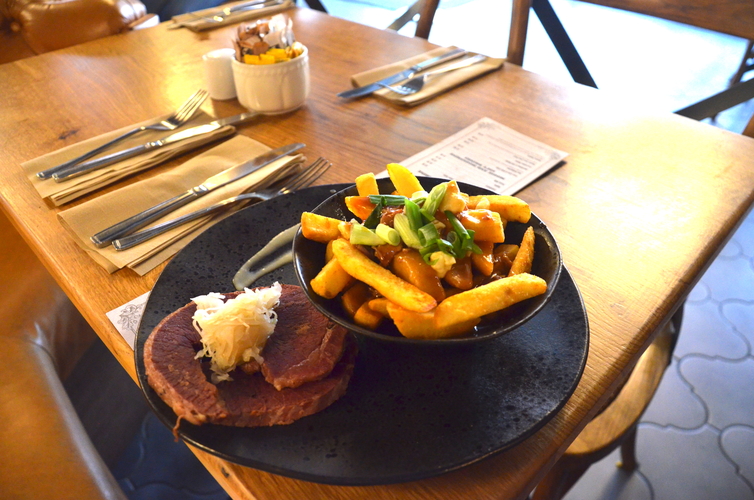 Poutine it this way, says Jonathan Schofield, it's just chips and gravy

MY notes start with ‘The host building, Federation House, has a forbidding exterior livened by some funky sixties abstract art which happily forms part of the internal decoration. The place seems popular, full with a well-heeled and good-looking university crowd.”

Many of the elements of Moon and Moonshine make for a pleasant experience. Good people-watching should be included on all ratings of restaurants, although maybe Michelin won’t be buying that.

The drinks are cheap, with the top of the range red just £22. We went for a De Alto Amo Rioja for £21. This was supposed to give us "sensations of raspberries, vanilla and cinnamon". Wine writing is hilarious. Can’t say I’ve ever had "a sensation of vanilla".

There are cocktails and loads of spirits but sadly no moonshine. If you include the latter in your business title, shouldn’t you include it on the menu? Maybe brew it out the back and send it in bottles wrapped in brown paper bags?

There are three specialist Canadian beers from the Pumphouse Brewery in New Brunswick. This reveals the subdued theme of Moon and Moonshine as Canadian, further revealed in the addition of several ‘poutine’ items on the menu. Moon and Moonshine makes much of this Quebecois dish and styles itself a ‘poutinerie’.

Poutine is chips, gravy, cheesy bits (cheese curds to be exact) and is utterly pointless in terms of being a feature on a restaurant menu.

It’s fast food for the Canadian streets, like chips and gravy in a carton, with a plastic spoon, is in the UK.

The poutine in Moon and Moonshine was only noticeable because of its name and apparent origin. The best part was the spring onion on top, the gravy was dull, the chips fine, the cheese I scarcely noticed. The £9 dish came with salt beef brisket which was a truculent thing, unappetising, squatting on the plate as sullen as people on a picket line.

It seemed the kitchen had looked at the dish and thought we'd best add something extra because it doesn’t look right. So they put sauerkraut on the salt beef, which helps a little, and a smear of smashed toffee apple sauce on the plate which was very good but bore no relation to the other elements. It was an inexplicable dish.

My dining partner’s Mighty Moose was only £7. This was formed by two rashers of bacon, two fried eggs, two slices of brown bread and a vast slab of potato hash griddled with Dijon mustard, garlic and onion. The bacon was overcooked, the eggs were perfect (hurrah, but not hard to achieve). The potato hash was a horror, with few of the advertised flavours aside from an annoyance of mustard. Worst of all it was completely without seasoning, a theme of the food generally. The dish defined dry from the bacon through the frigid brown bread to the hash.

Perhaps the seasoning budget had been spent on buying extra sugar for the dessert, particularly our chocolate caramel tart at £5. Wow, this was sweet, too sweet for my taste, but others might like it. Forget the horrible brown smear on the plate, I’d say to the kitchen, it does the presentation no favours. A plus point was that this dish seemed free of actual cooking errors.

I enjoyed the abstract mural throughout the meal. It looked like something from William Mitchell, in his distinctive blocky Aztec-style. We need to hold onto these vestiges of a period in art which was incredibly optimistic and yet is now much derided.

“We all like it too,” said the waitress, “although when mums bring their kids in here the kids think it’s a climbing wall.”

The prices at Moon and Moonshine are reasonable but the food quality on our visit was poor. This belied the popularity of the place.

Apparently The Guardian has just recommended it as one of the best UK places for brunch. This may be the case if you have a raging hangover and want to stuff your face with carbs but aside from the people watching and the mural it’s hard to see the appeal.

As for poutine it makes you wonder whether there’s a restaurant in Quebec selling genuine British chips and onion gravy as a feature while pretending it’s great because it’s from somewhere else and thus exotic.

It seems as a nation (especially those hipsters in their twenties and early thirties) we are complete suckers for any old North American crap.

Poutine? Why? Where’s the chippy? I want some proper chips and gravy.