'Why is a major city like Liverpool not attracting Grade A office schemes with all the jobs they bring?'

A LIVERPOOL-born architect and designer has created a startling new vision of his hometown, saying it needs to think big and bold to re-establish itself as a world class city.

The scheme for Lime Street is not nearly good enough, it is bland and cheap

The 33-year-old London-based 3D designer and motion graphic artist has created a stunning portfolio of schemes that would take Liverpool to a new level.

They include a suspension bridge over the Mersey, a futuristic cruise liner terminal, an alternative vision of the north docks and a fantastical arts and cultural centre at Woodside.

He believes Liverpool needs to think on the scale of New York or London, saying once upon a time Liverpool belonged to the same league as those two great cities.

McDonough gave up working in architecture seven years ago to carve out a new career in design, working for clients such as John Lewis, Selfridges and Saachi and Saachi.

But although McDonough has long left his childhood home in Speke’s Western Avenue, he still retains a passion for Liverpool, saying he laments the thinking of the people who run the city.

His perspectives for his dream Liverpool are captured in a website he has created, WhatnextLiverpool.

Speaking to Liverpool Confidential today, he said: “A few years ago we were building Liverpool One, with more than a hundred architects who created something that was not just another shopping mall.

“And there were attempts to create buildings, some people love, some who hate, such as the black blocks at Mann Island and the Museum of Liverpool.

“But since then we have retreated and are just building bland student blocks.  The scheme for Lime Street is not nearly good enough, it is bland and cheap with yet more student flats. It is such an important site, close to Lime Street Station, it should have become a focal point."

He added: “What we need are more office blocks, bringing jobs with them. Those kinds of developments are going to places like Manchester. Liverpool is placing too much emphasis on culture and students.

“It seems that when companies in London are seeking a regional office, Liverpool has been marginalised. They will usually go elsewhere.

“My work is intended to stimulate debate to try to get people to think bigger.  None of the schemes I have put forward are fluffy ideas, they are achievable.

“The biggest problem for Liverpool is the small minded outlook it seems to have developed. We need flair and originality.

“There are examples of some good architecture, around the universities and in Ropewalks. But we need organisations like Urban Splash, who came into Liverpool and Manchester in the early 1990s, to restore old buildings and create new ones.”

McDonough went on: “It seems to me that today Liverpool is dominated by a small handful of architects, and a clique has developed, which, in some ways ,is holding the city back, with too much emphasis on residential and student developments.

“You have to ask the question: why is a major city like Liverpool not attracting Grade A office schemes with all the jobs they bring? What we need is a body that encourages a higher level of architecture and design that does not scare away developments.

“There have been debates about the world heritage site and heritage. Not all old buildings need to be saved, but when they are removed they should be replaced with something that is better.”

McDonough’s work will rekindle thoughts about Will Alsop’s Cloud, the last major scheme put forward for Liverpool as a 21st century “Fourth Grace”.

It was bold, controversial, as loathed as it was loved, but would, had it not been abandoned, given Liverpool the statement “Sydney Opera House” it needs.

The latest offering from a boy who went to St Christopher’s Primary in Speke, and then St John Almond in Garston, should give Liverpool’s decision makers plenty to ponder.

Fantastic buildings and where to find them 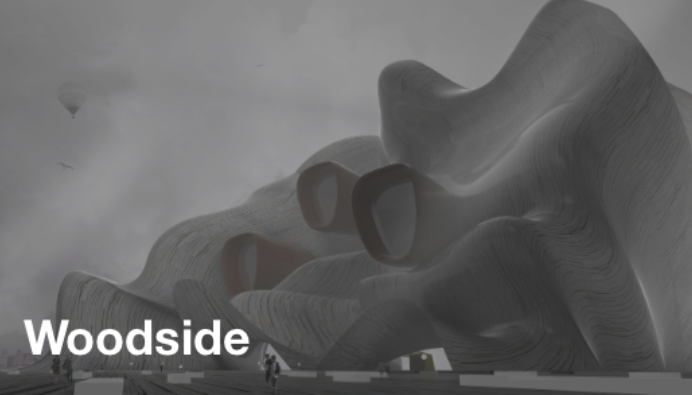 THESE images show Michael McDonough's idea of how Birkenhead and Liverpool should be linked - beyond a world landmark bridge. A kind of Southbank for the Mersey.

McDonough, who grew up in Liverpool, describes it as a major new arts, events and cultural landmark building for the banks of the Mersey at Birkenhead Woodside.

"The design is part of a wider conceptual project to create a long sought after pedestrian link between the two banks of the regions city centre," he says.

"The functional aim of the building is to re-establish economic balance between the east and west sides of the river, creating compelling reasons to positively draw more people across the river by expanding the combined cities cultural offering, bringing new life to Birkenhead town centre, and re-establishing it as a name recognised around the world once more."

The interior, below, seems equally remarkable.