Gary Usher delivers his promise to the people. By Gerry Corner

LIVERPOOL seems like an appropriate place for the closest thing to the restaurant-as-socialist collective.

Wreckfish was funded by the people, 1,522 enthusiasts who raised the record-breaking £200,000 required, via a crowdfunding website. Accordingly, it has the feel of a place for the many, not the few.

Gary Usher’s fourth restaurant, and counting, generates a warmth that somehow manages to radiate down the road. As we approach, past the huddle of no-messing black-clad bouncers and the grim bouquets for a young murder victim, there it is, on the corner of Slater Street, glowing like the farmhouse light that guides the lost on a cold and lonely night.

Inside the 19th century watchmaker’s factory it’s all brick and wood, softly lit, homely and hospitable, the old building’s raw materials displayed to their best advantage: solid and reassuring.

The man’s in the building tonight, the Kickstartered tattooed talent behind Sticky Walnut (Chester), Burnt Truffle (Heswall) and Hispi (Manchester).

Working away in the open kitchen, that thrum of efficiency at the end of the room, you can’t miss him; he’s the one the with the reptilian body-art down both arms. I don’t know what variety of snake it is but it looks like it carries the same venom Usher occasionally spits at critics on social media.

We are greeted by staff, unburdened by age, who have an energy that’s infectious and a calm assurance that belies their youth, my apologies for a late arrival shrugged away.

As we are led downstairs I prepare to be dismayed, only to find this is no half-arsed overspill area, but a seamless more of the same, with brick arches, wood panelling, strong colours and art on the walls.

Tonight’s patrons span the generations but there are more than a few hirsute hipsters in search of something a little more grown up than the usual dirty burgers and burritos to nest in their beards.

Usher’s story has the makings of a movie script; the severely dyslexic North Wales schoolboy treated like a halfwit; the pub boss who saw behind the thick-framed glasses and appointed him the region's “first pub apprentice”; perfecting his trade with (among others) Angela Hartnett (who perfected hers with Gordon Ramsay); opening his own place, Sticky Walnut, and quadrupling the turnover of the previous restaurant in the building.

He thought the banks might be willing to help him expand. Wrong. Maybe they didn’t like his tattoos, but they repeatedly said no, even refusing to stump up a measly £10k for air conditioning when Sticky Walnut was packing in so many customers that their combined body heat was causing some to literally pass out. Proof, were it really needed, that bankers are an alien species whose only interest in the human race is as a food source.

At which point Usher turned to alternative means of raising capital and, in the case of Wreckfish, found Michelin-starred chefs like Daniel Clifford and Tom Kerridge were among those offering their support.

You could understand it all going to his head. But at Wreckfish, there’s no glitz, no pretence, no big I am, just a warm welcome and bistro food prepared to a standard that’s pretty much guaranteed to make this everyone’s favourite city centre restaurant.

We start with gordal olives (£4) and fresh baguette and butter, (£3) both of which seem a fraction overpriced for the modest quantities even if they are bloody good; the olives fleshy and gleaming and full-flavoured; the bread, crusty and airy, baked on the premises that day.

Nubs of creamy burrata cheese come with green tomato chutney, Jerusalem artichoke crisps and pickled grapes under a crown of frisee (£8.50). Posh ploughman’s; it’s all very nice but, but in the season of Guy Fawkes, it doesn’t light my fire.

The same can’t be said of celeriac agnolotti (£7) tiny cushions of pasta, similar to ravioli but with a softer, melt-in-the-mouth delicacy, the filling lending refinement to a big ugly bear of a vegetable. Add the sweet, soft crunch of breadcrumbs fried in duck fat and generous truffle butter sauce with a whisper of spice and you have a superlative dish that takes a lovely picture.

Usher gets his meat from Lee Frost, well known Manchester butcher and fellow keyboard warrior. They probably met on Twitter.

I don’t know what else the kitchen has done to the beef featherblade (£18), other than braising the hell out of it, but the result is no longer mere animal flesh but a dark and brooding, caramelised, gelatinous heap of love. If meat were to always taste this way, vegetarianism would be unattainable.

With it, a perfect disc of mushroom purée, and chips treated with truffle and parmesan, crunchy and soft, the best chips you’ll find in town, that’s all.

You can see why this particular cut of meat presently features on all of Usher’s menus; the ultimate crowd pleaser, you would call it a banker if only that wasn’t a banned word in these parts.

For pan-roasted skate wing (£20) the kitchen is channeling Daryl Hannah in Splash, the fish’s wonderfully meaty strands coming away from the bone like the luxuriant hair of some flaxen goddess of the sea, Princess Skate. It sits atop a bed of finely shredded, precisely cooked white cabbage, another unfashionable vegetable here allowed to shine, and a golden pond of browned butter, sweet and nutty and the best fun you’ll have blocking a major artery. 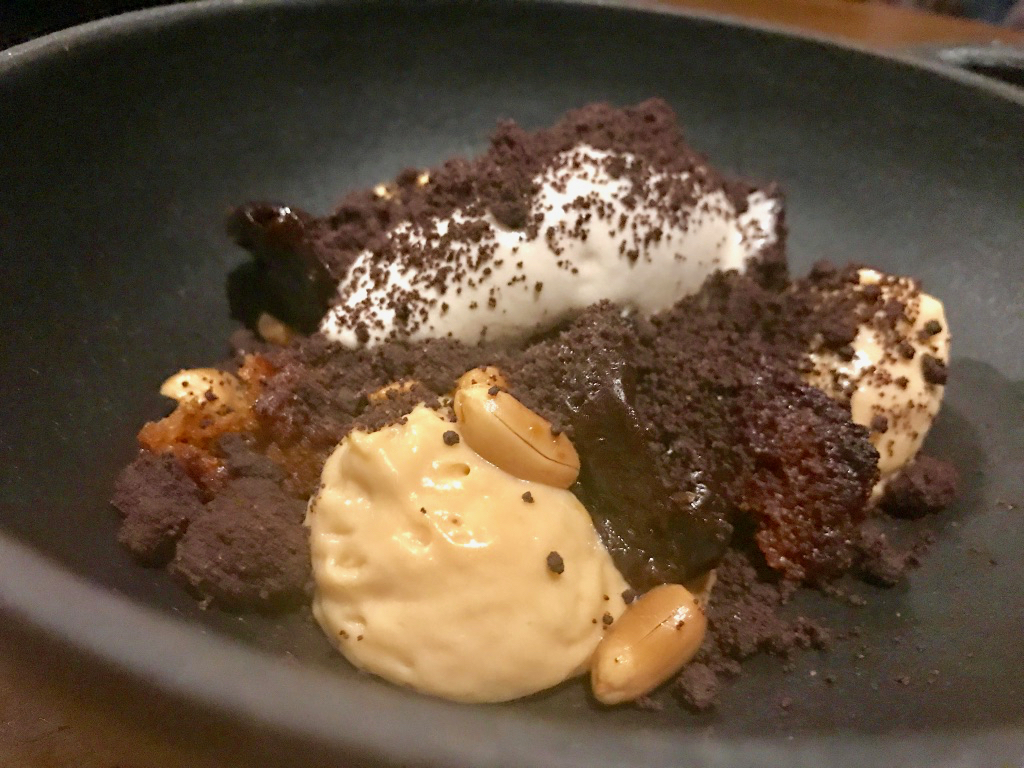 Puddings are the caress of a warm marmalade sponge (£6.50), soaking in a finely balanced bittersweet sauce and, all on the same plate, toasted porter ice cream, baked treacle all crusty and gooey, caramel, peanuts and Armagnac prunes (£7). Get a bit of everything on your spoon, says our server. Good advice but a special mention for the brandy-soaked fruit which, in one dish, finally rescues the reputation of prunes from the clutches of constipated pensioners.

If I have one tiny complaint it is the rule that says you have two hours to eat and sod off. And I know it doesn’t by any means apply only to Wreckfish, and I should say that nobody, at any point, mentioned it, and yes I do understand that restaurants are precarious ventures, and no doubt it fills the watchmakers’ descendants with a rosy glow of nostalgia to think of us all checking our timepieces, but this is not food to be eaten with an eye on the clock, mindful of the near future.

Mindfulness, the buzz therapy of our day, encourages its practitioners to be wholly present in the moment. With food like this in front of you, there’s no other place to be. 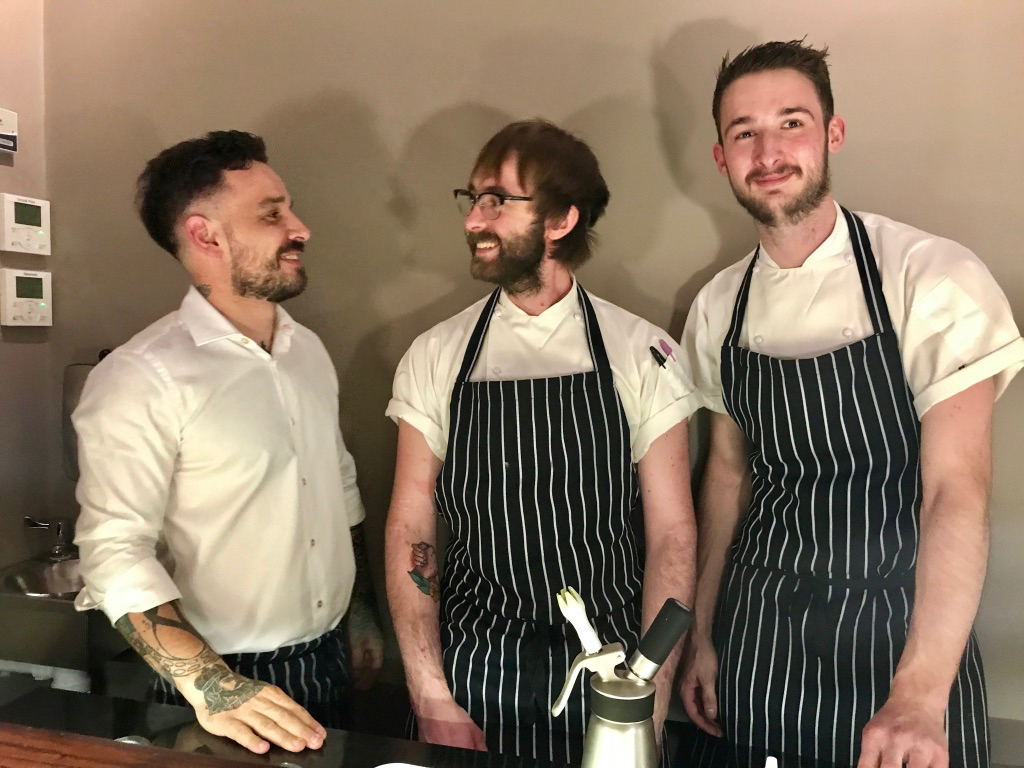