Restaurant review: Down The Hatch

They say you should never look back. Well, driving instructors don’t say that, but lots of other people do. Never look back, never regret, never dwell on the past.

Alas, that’s easier said than done when you’ve been despatched to review a restaurant located in a basement where you had your first big Liverpool night out over 20 years ago, where the city’s mid-90s techno scene turned you into a gurning, twitching loon dosed up on repetitive beats.

There’s no place here for chickpeas and hummus, no worthy soups with hefty wedges of gravel-topped bread

So as I descend into Down the Hatch, Duke Street’s newish "vegetarian and vegan junk food" emporium in the cellar of Le Bateau – which, for younger readers, was once a sticky-floored hideaway for music-loving oddballs and outcasts but is now, naturally, an "aparthotel" – I am not seeing artfully exposed beams and tasteful bare brick, but the strobe-flecked pitch-black den in which we once raised our hands in the air. Almost as if we didn’t care.

But enough of that. Don’t look back. Look forward, instead, to the kind of junk food that never said “moo”.


The first thing to remember is that Down the Hatch is a subterranean space with all the low-ceilinged cosiness that implies. If you’re looking for light and air, take a photograph of the sky before you go in. On my visit, Duke Street is drenched in sunshine, but down in the restaurant it could easily be the middle of the night.

I like that though. It makes things a bit secret, a bit special, and the space has been handsomely upgraded since I lost my shit down there to the likes of Plastikman and his sphincter-rattling drum machine.

There are comfy looking booth seats as you enter, and a bar down the wall to your right. It’s a long, narrow, tunnel-like space, with smaller tables further in and a bright, sparkling kitchen at the end.

If its immaculate physical appearance strikes a blow against any notion that vegetarian restaurants must be crusty, ramshackle affairs, the menu is equally forthright. There’s no place here for chickpeas and hummus, no worthy soups with hefty wedges of gravel-topped bread. All those things are delicious of course, but it’s exciting to see veggie food looking as trashy and deep fried as this.

With menu sections for "small junk", "big junk" and "bun junk" (i.e. burgers, including bean patties and seitan slices piled with potato rostis, mushrooms and cheeses), plus some less junky "home cooked" choices (a lasagne, a frittata, a Thai green curry and so on), there’s certainly plenty to go at. For vegetarians and vegans who are sick of having just one or two options, this is manna from Heaven – albeit served with pulled jack fruit and a spicy barbecue sauce.

My pal and I attempt to replicate the standard starter/main course dialectic by each combining a choice from the small junk and big junk categories, but this is a restaurant in which things simply come when they’re done, and portion sizes don’t necessarily tally with your expectations. Based on our experience, and depending on your appetite, a big junk and small junk combo could well prove too much. So check with your server first.

First to appear is a basket of nachos – here known as Hatchos (£7.50) – and although it’s a dish that’s hard to get wrong, these ones are impressively right. Loaded with just enough melty cheese, stickily sweet marinaded jack fruit, salsa and jalapenos, the divine triangles themselves deliver the first indication that things are going to go pretty well.

Bubbled like poppadoms and coloured like American tan tights, they are crispy, of course, but biteable too – they don’t shatter like a bag of Doritos. And they’re super-fresh, clearly lifted straight from the fryer, and the portion is perfectly sized. In Down the Hatch terminology, this is "big junk" – but not super-sized.

The salted veg fritters (£3.50) from the small junk list aren’t quite as successful, though; with their accompanying salad gleaming like a bag of midget gems and a dollop of very good, crunchy coleslaw, they look great and are well served by their tasty plate mates. The fritters themselves are bhaji-style tangles of pepper and courgette, but their battery coating seems too soft in the middle. Plus, although the word "salted" appears in their name, it’s all a little too bland.

Also from the small junk section is a "beetloaf" (£4) – a mock terrine formed from goats’ cheese interleaved with spinach and covered in a stormtrooper’s helmet of sliced beetroot. It’s interesting as a dish to share, but goats’ cheese tends to be dry and there’s surely too much of it here for a single portion.

A small bowl of deep fried halloumi (£2.50) is much better, even if only for the fact that it doesn’t resemble the salty supermarket slab that unimaginative restaurants stick in a bun and call a burger. In fact it deserves much more praise than that. Served cubed with a delicately textured light batter coating, this is a softer, cheesier halloumi than vegetarians are usually fobbed off with, and though it’s only classed as a side dish, it’s a bowl of unfettered joy.

And then there’s the completely unjunky bowl of Blue Mountain Ital Stew (£7), a simple but satisfying spiced slop with great hunks of soft veg in which two large corn flour dumplings sit like desiccated golf balls. There’s plenty of kick, and it just so happens that the richness and heat set off my accompanying schooner of cold and bitter Goose Island IPA (£3.50) in fine style.

We have a basket of skinny fries too (£2), a very generous portion and rather more than we need. They are fantastic though, with not a trace of grease, a scattering of salt and paprika, and a compelling munchability that sees us loosening our belts rather than letting any go to waste.

The dessert menu is small, but the Emo Mess (£4) – “Eton Mess with a darker side” – is delicious (though what the darker side is remains a mystery). The apple pie featured on the menu is missing – “We couldn’t get any cooking apples” – but is replaced by a light, butterscotchy pecan tart from the famed Caz’s Kitchen in Waterloo.

What I expect is a dense and gooey slab of something brown, but what I get is a much lighter dessert, almost like a slice of thick and creamy mousse with a pecan and coconut topping. The tart, incidentally, works brilliantly with a Hatchpresso Martini (£7.50) from the cocktail list. With cinnamon syrup on top of vodka, amaretto and Cointreau, it could have been overly sweet, but the house-blend cold-drip coffee dilutes the stickiness to create a dangerously gluggable, caffeinated treat.

As well as being a restaurant, Down the Hatch also operates as a bar with an inviting, after-hours atmosphere. However, Liverpool isn’t short of capable basement bars, so for drinkers it’s simply another decent addition to the city’s roll-call.

But with such a distinctive restaurant proposition – food with the style and spirit of somewhere like Almost Famous, but without the associated slaughter – the bar is just a sideline. It’s via its menu that this place must fight its meat-free corner, and for the most part, it lands some satisfying blows.

For all its strutting menu talk of "junk" and "trash" and its teetering piled-up burgers – unordered by us, but we see them parading past – Down the Hatch hides some seriously wholesome cooking behind its bravado.

But the deep fried, the battered and the cheesy remain its stock in trade. And in that respect at least, perhaps this Duke Street basement hasn’t moved on so very far from techno rave-ups past. 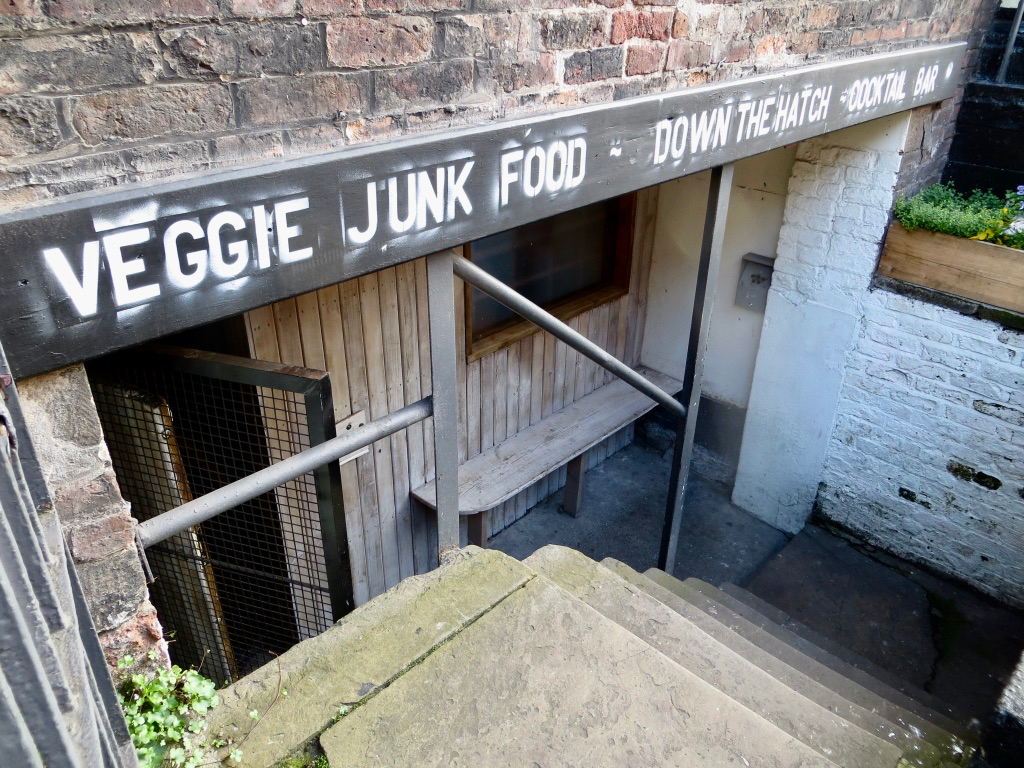