Who is the ace of base and who does the toppermost toppings?

Picture the scene. You’re on Bold Street and you’re hungry. Ravenous, even. Perhaps before (or after) a night on the bevvies or something else.

You don’t have the time or the cash to head into a restaurant for a sit-down meal but want something with a bit more panache than a kebab. And you’d rather eat a manky sock than anything in the trendy “clean eats” category.

This is where American Pizza Slice and Nightcrawler Pizza come in. For less than a tenner, you can gorge yourself on slices of freshly cooked pizza and a (craft) beer if you’re so inclined. Even better, you can be in and out in less than half an hour (or ten minutes at a push).

Now, everyone loves pizza, but, in the interests of research we decided to visit both American Pizza Slice and Nightcrawler Pizza to see which slices reign supreme. Hey, it’s hard work, but someone’s got to do it.

Our quest initially takes us to Nightcrawler where – horror of horrors – they’ve run out of pizza. OK, so it’s a Bank Holiday weekend, but faced with such a dilemma, what to do?

Well, in our case, it’s walk two minutes around the corner to American Pizza Slice’s Bold Street outlet, which is buzzing. Echo and the Bunnymen are on the stereo and the emoji cushions on the benches look plump and inviting after a day spent visiting the city’s numerous beer gardens.

American Pizza Slice is a Liverpool institution and – let's be honest – one I have a bit of a soft spot for. I'm yet to have a bad slice from them and have been known to rave loud and long to anyone who will listen about their American Hot.

Bold Street (there are also branches in Whitechapel and Waterloo) has a wood fired oven and there’s an impressive array of topping choices behind the counter catering for  carnivores and veggies and even little pots of marinara for you to dip your crusts into.

Their two slices and a craft beer for £6 deal is an utter bargain and our choices consist of a slice of margherita and one topped with fennel sausage, fire roasted peppers and mascarpone. As margheritas go, it’s satisfying enough – a warm, freshly cooked blanket of cheese, tomato and carbs. The fennel sausage slice is good, but it’s hard to make out the fennel in the fennel sausage. If it’s there, it’s being smothered by the mascarpone which feels like a bit of an odd accompaniment, enveloping everything in its wake in a sea of creaminess. It’s elevated by a healthy dunk into the marinara sauce which may be nothing more than tomatoes, olive oil and herbs, but which is so good, we could happily drink it by the vat.

There’s also a pretty decent selection of sides and dessert pizzas being offered (Butterscotch Pizza Star, anyone?) but we’re on a promise. And besides, we needed to get a wiggle onto Nightcrawler before they ran out of pizza again.... 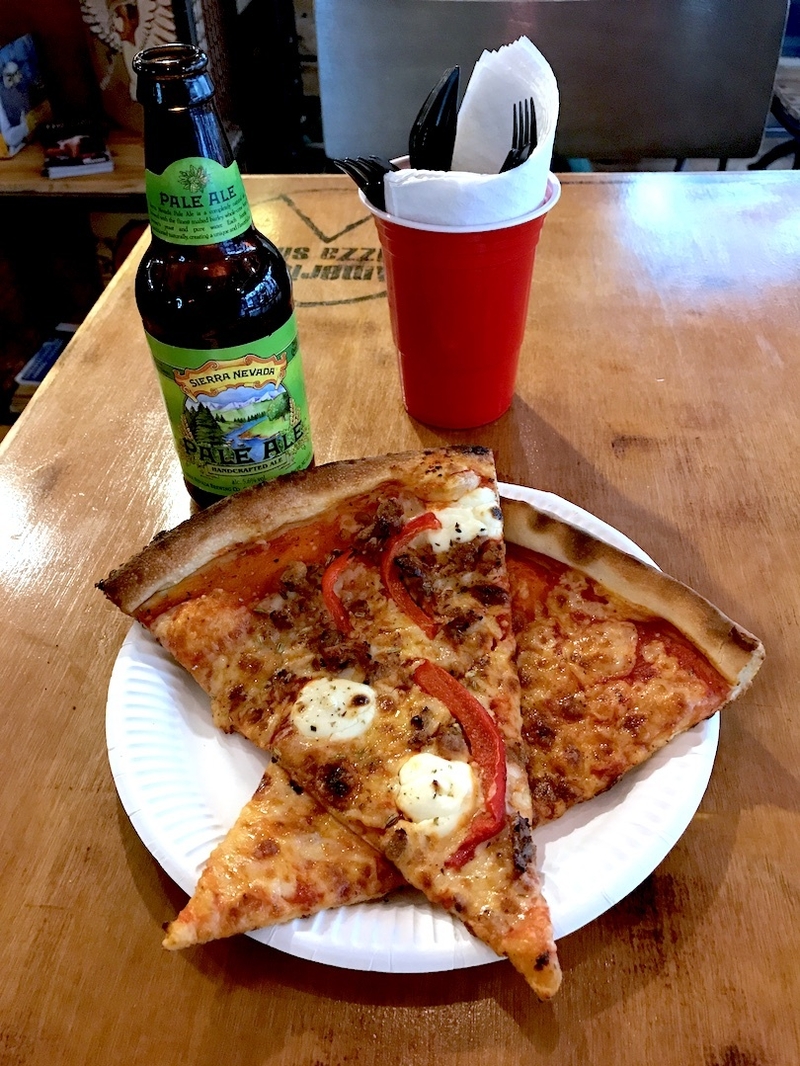 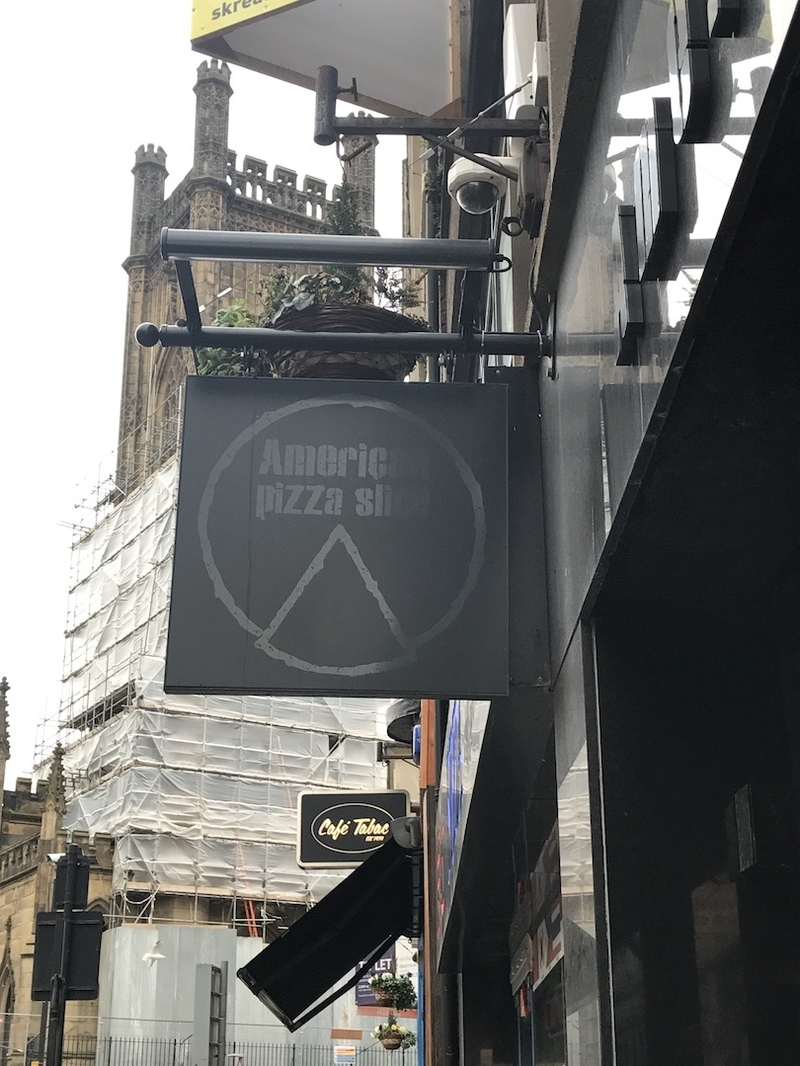 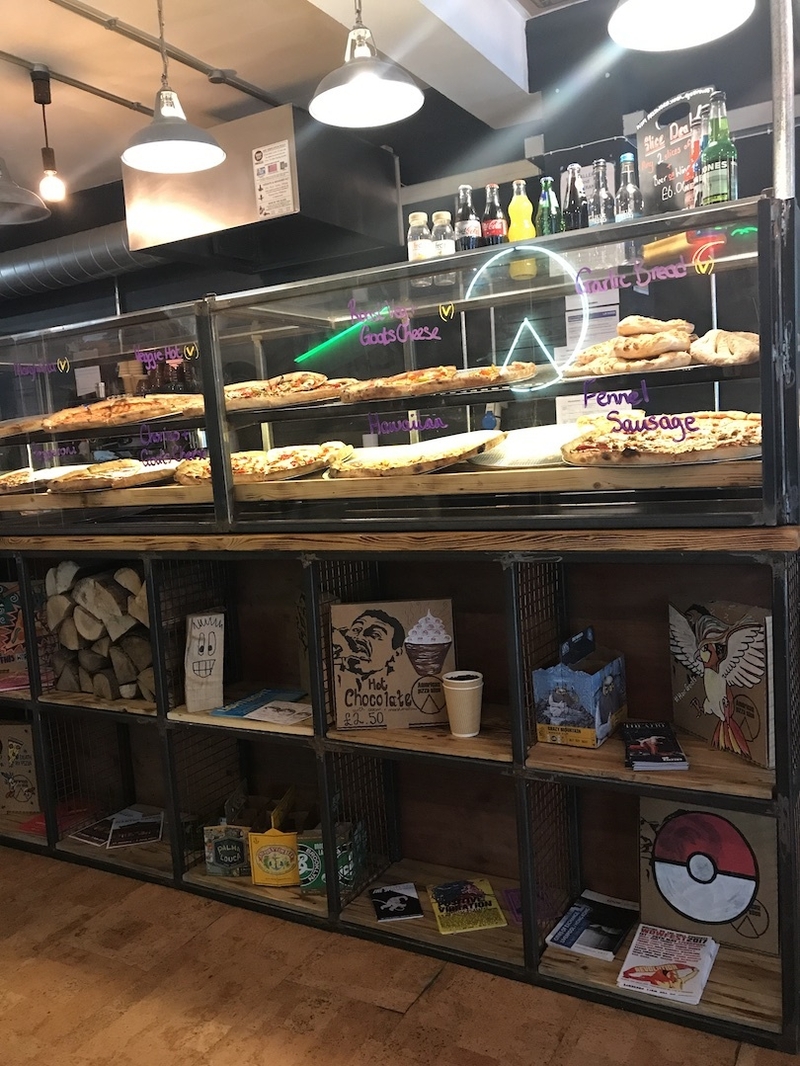 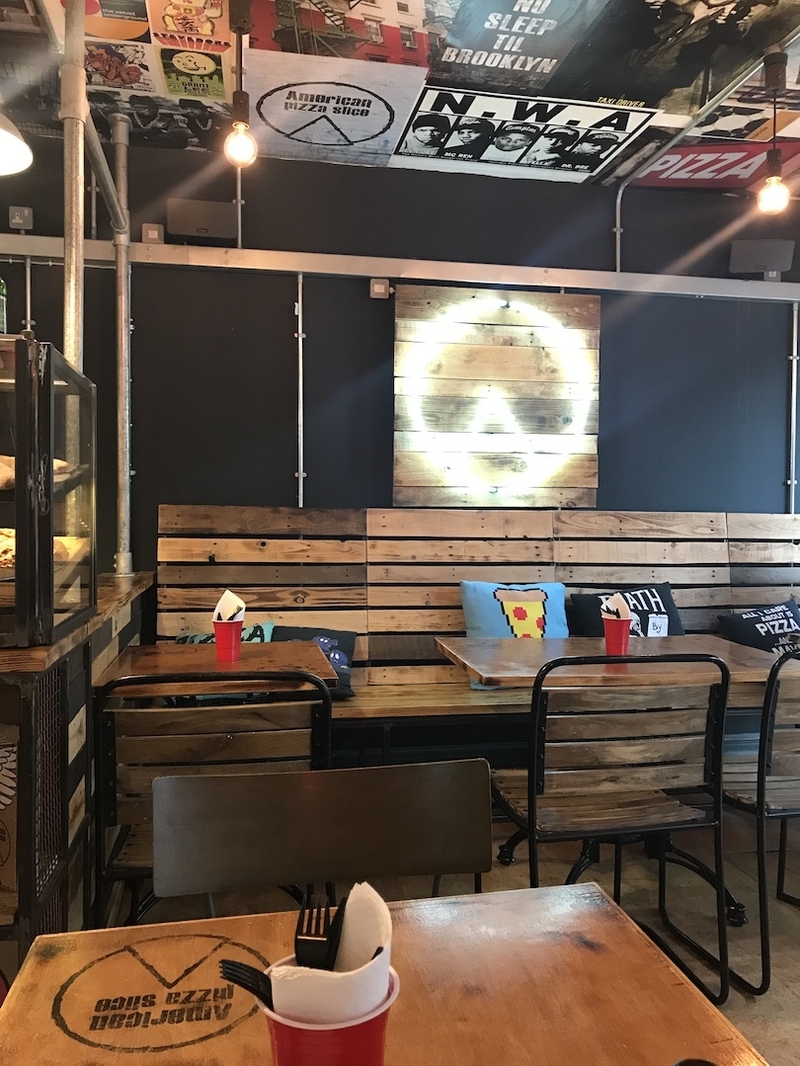 A second chance for Slater Street....

Situated in Merchants, the former Mello Mello, Nightcrawler Pizza is nothing more than a neon tiled counter, a few benches and a roaring oven. The names of their slices are impressive and diverse, ranging from the Francesco Totti (Gorgonzolla, artichoke, fried rosemary and sicillian olives) to The Big Mouth (a vegan option featuring olives, peppers, basil and caramelised onions.)

Best of all, all of their slices are half price before 7pm. Considering that no slice costs more than £3, this is an undeniable bargain, particularly if there’s more fresh air than spare change in your wallet.

A pizzeria in a pub is always going to be a popular prospect which is probably why it was absolutely heaving both times we visited. You wonder why more don’t capitalise on this idea, particularly as it makes quite a nice change from the same tired old "pub grub". Why spend upwards of £8 on greasy fish and chips when you can just wrap yourself up in a comfort blanket of cut price carbs? 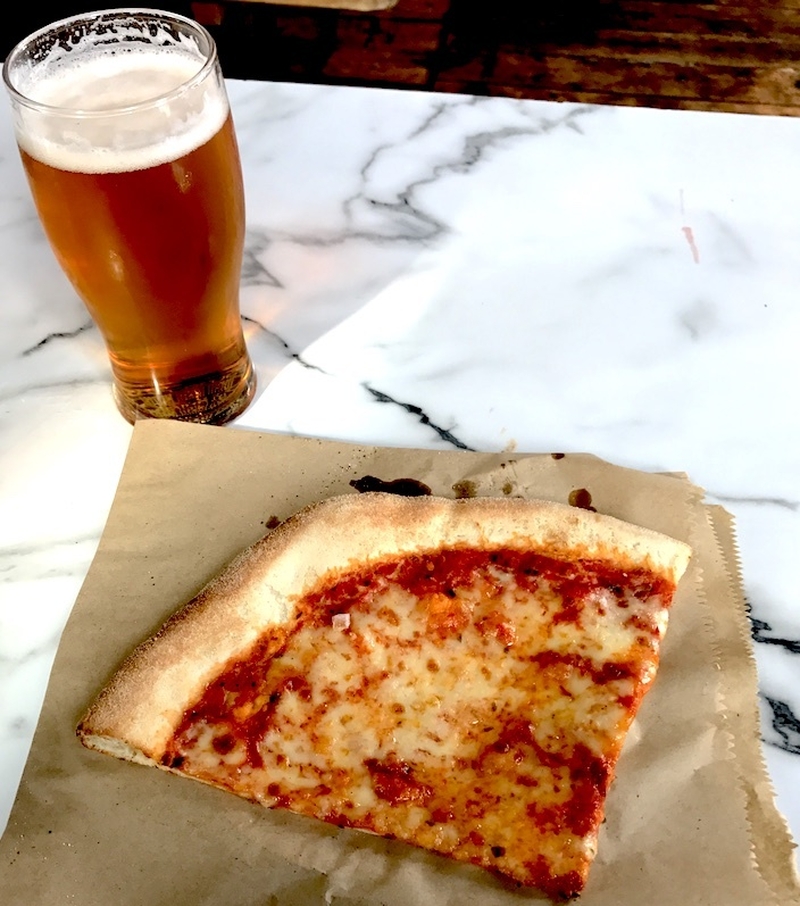 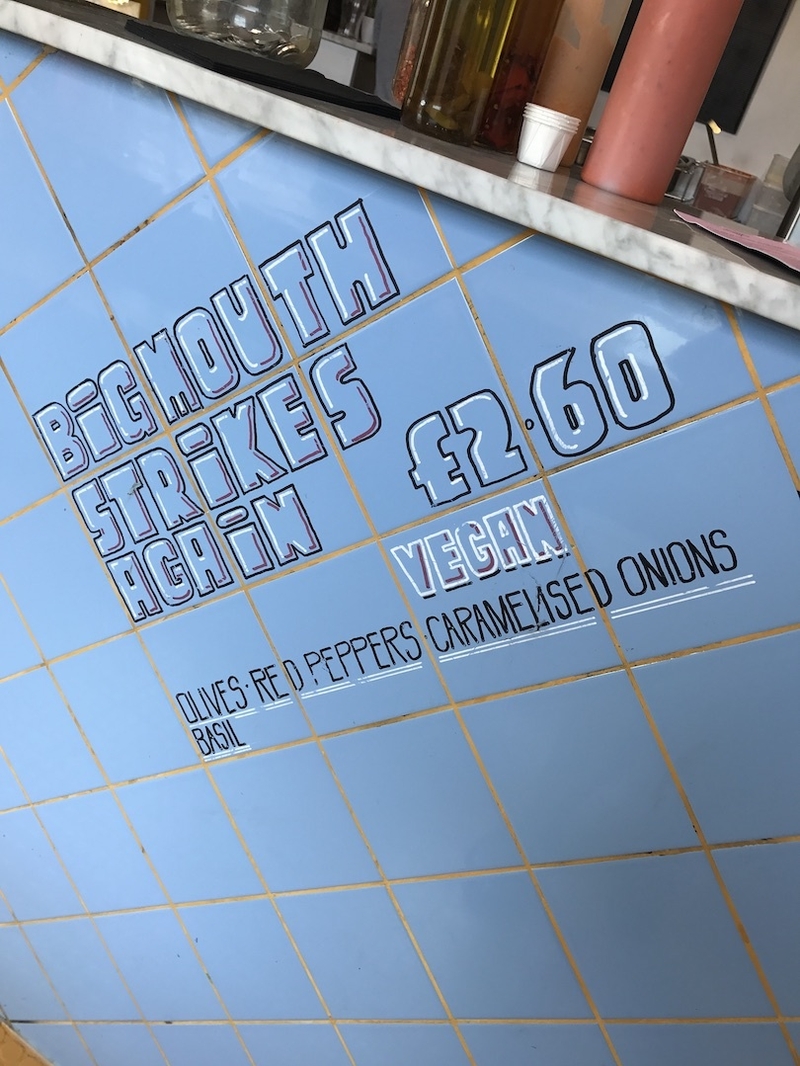 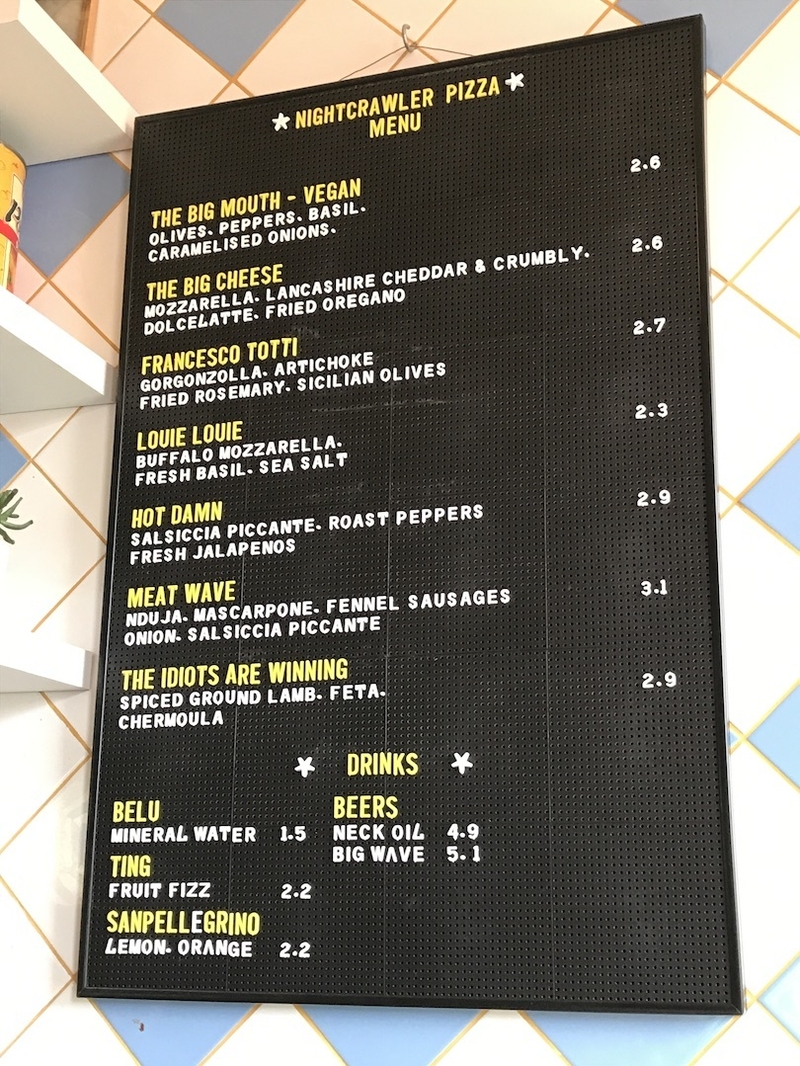 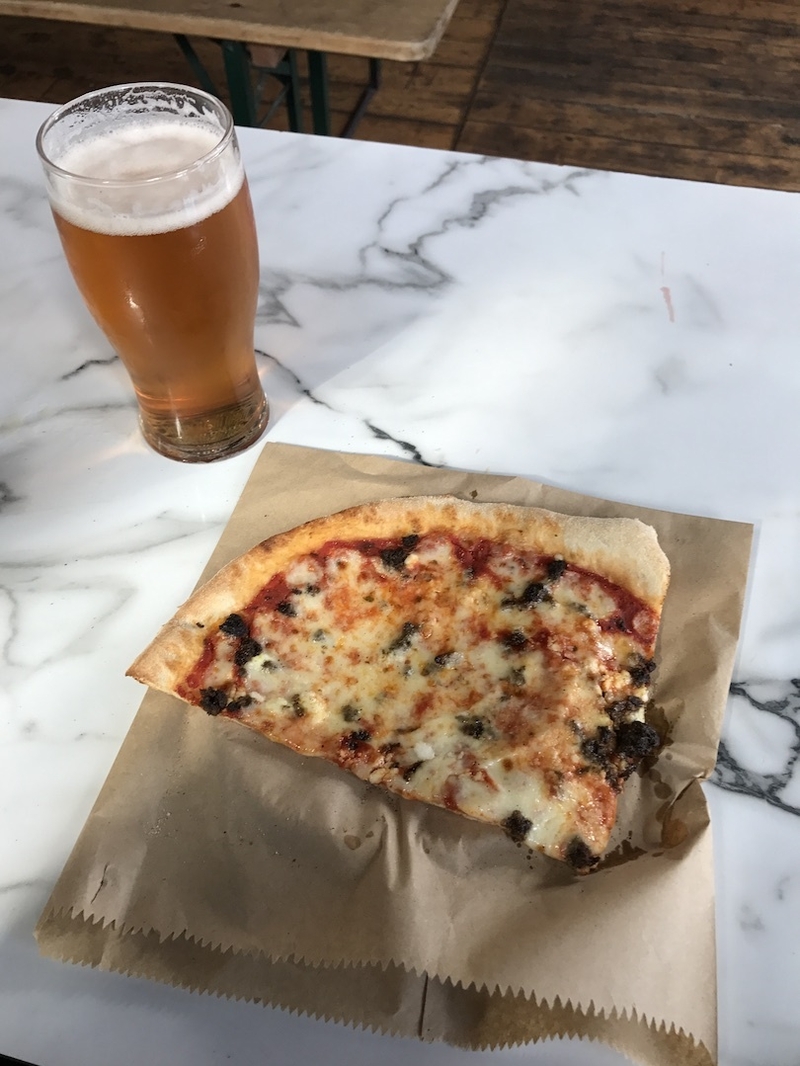 At £5.50, Our pint of Lagunitas IPA is way more expensive than our two slices, the ‘Louie Louie’ (buffalo mozzarella, fresh basil and sea salt) and the Nathan Barley inspired ‘The Idiots are Winning’ (spiced ground lamb, feta and chermoula – a pungent North African spice mix).

After being warmed up in front of us, both slices are satisfyingly greasy – think more school cafeteria than Roman pizza al taglio -  leaving our lips slickened with a delicious combination of olive oil and salt.

The Louie Louie benefits from a robust sprinkling of sea salt, although we wouldn’t know  it featured buffalo mozzarella unless we’d seen it mentioned on the menu. And like Nathan Barley’s Geek Pie haircut, The Idiots are Winning offers much but delivers little.

The nubbins of lamb are overcooked and we can’t really taste the feta or any of the spices you’d expect to find in a chermoula. We did like the homemade garlic and chilli oils we found on the counter, although shied away from the hot bastard sauce this time (it had been a long weekend.) And you can’t deny that two pieces of not terrible if not amazing pizza for under £3 is one of the city’s best fast food bargains.

So, in the battle of the slices, American Pizza Slice edges it. But when it comes down to it, they both do satisfying stuff for a satisfyingly small amount of money. Go in hungry and leave happy. 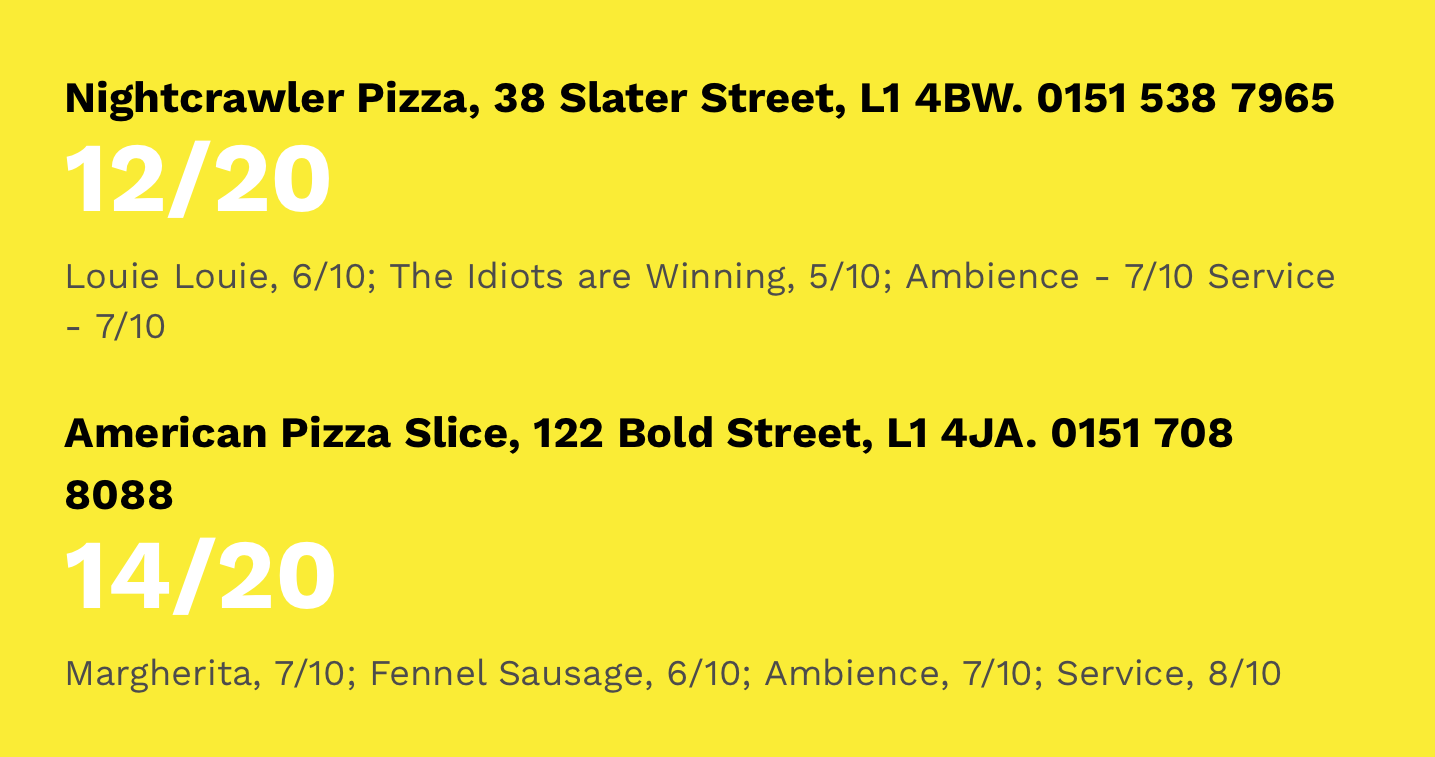