Hidden away from the chaos of Castle Street, there’s a tiny little alleyway that’s been making a rather big impression online recently. Dubbed by local press as Liverpool’s answer to Diagon Alley (that’s a Harry Potter reference for those of you who aren’t magically inclined), Queen Avenue is supposedly a ‘secret shopping street’ hiding away several cute and quirky independents in Liverpool’s booming business district.

Deep emerald walls, dark stained wood and flickering candles may make for one of the most romantic restaurant settings I’ve seen

The Grade II listed buildings on this street make up for, in impact, what they lack in size. Huge bay windows, hanging baskets and gilded signage are just yet another example of some of Liverpool’s spectacular and sometimes surprising architecture. Formerly occupied by banks and accountants they’re now home to a spattering of shops, a hairdressers and a brand new Bistro named Queens. 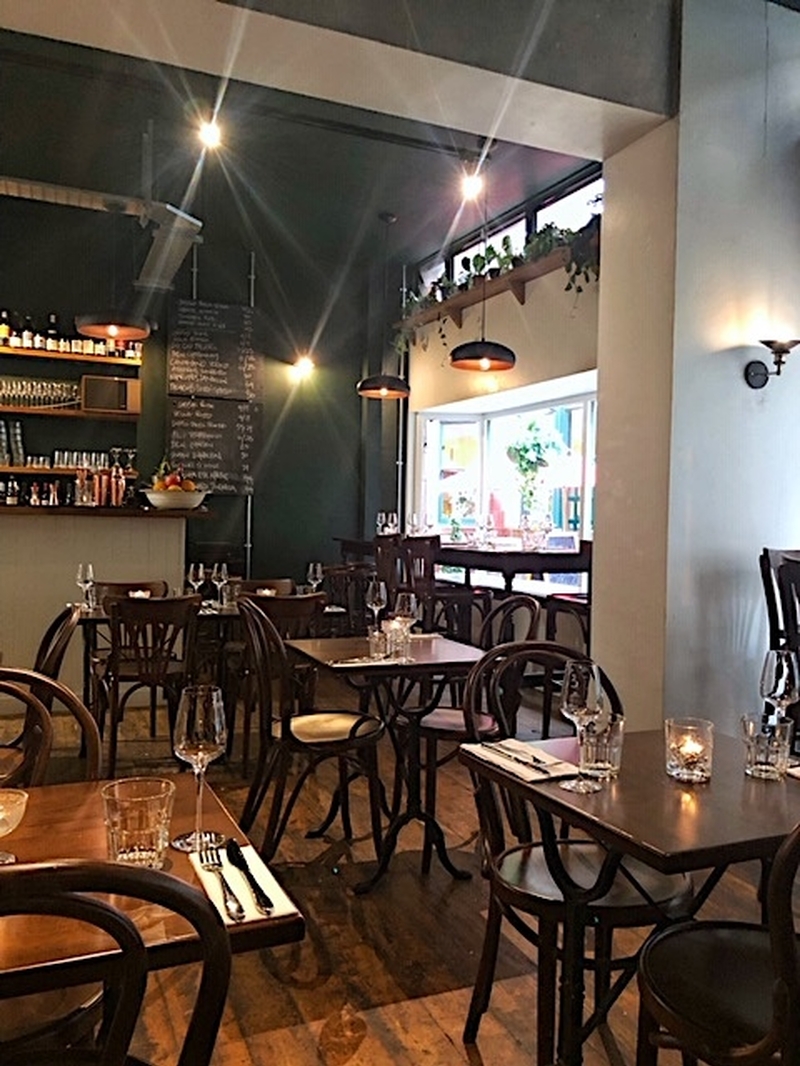 Queens is a wine bar boasting amongst other things a market menu, seasonal cooking and handmade wine. It’s a simple but beautiful looking place on the inside and perfectly suited to its picturesque home. Deep emerald walls, dark stained wood and flickering candles may make for one of the most romantic restaurant settings I’ve seen in a while but certainly make it tricky to get a decent food picture…of course if you’re here on a date (or just a normal person?) you won’t be worrying too much about that.

The wine isn’t listed on a menu but is instead chalked up daily on a blackboard behind the bar. I’m not sure if it was my ageing eyes, the dim mood lighting or the cocktail I’d necked before dinner but as lovely as it was, I struggled to read a single word of it from the far side of the restaurant. Fortunately the staff are on hand to recommend something good, and in this case it was definitely the right decision to leave it to the experts.

I gave our waiter a fairly random series of contradictory adjectives to describe what I wanted to drink, something along the lines of crisp but not dry and not sweet or bitter… poor bloke. Luckily he just so happened to find us a glass of something delicious that matched that exact description. I was even more impressed when the bill came and his specialist Spanish recommendation had only come in at £4 a pop.

That’s cracking service really, isn’t it? The menu reads as French home-style cooking. Pork rillettes (£7.00) came as a chunky slab of even chunkier pieces of pork inside. Flavoured delicately with paprika and sherry, it was like a grown-up version of pulled pork. Somehow it wasn’t too heavy, perhaps due to the crisp celeriac and truffle remoulade or the sourdough which came in toasted slithers rather than slices. Anglesey moules mariniére (£6.50) must be good because they appear on the menu twice, in two different portion sizes. The starter size sadly doesn’t come with fries, but the juicy mussels hold their own in a delicate, creamy broth.

A main of crisp Cheshire pork belly (£16.00) came resting on a creamy cassoulet, sweetened with carrot and enriched with chunks of tender confit duck. The all-important crackling was just right and added necessary texture and saltiness to the dish. The Ribble Valley chicken leg (£14.00) was equally as well cooked, served with a tangle of creamed cabbage, buttery parmentier potatoes and bites of salty pancetta.  It’s simple food but it’s done, very, very well.

Despite being open barely four weeks and being in a risky location on one of Liverpool’s apparently most unknown streets, it seemed like Queen’s were doing pretty well. While we ate people popped in and out for reservations, and wandering past later in the evening I was chuffed to see it looking so busy.

While the small plates movement shows no signs of slowing and the Insta-crazy foods get more outrageous by the day, it just goes to show that there’s still a place for honest, hearty restaurant food and a good glass of wine. There’s definitely a bit of magic in that, isn’t there?