'No need to call halt to building of student flats'

THERE is no need for the council to veto the rampant building of student accommodation in Liverpool, because eventually it will slow down of its own accord.

That is the key finding of a study commissioned by Liverpool Mayor Joe Anderson, published today.

However, the independent review called for measures to "influence" the quality and location of purpose-built student accommodation, in the future.

Labour Councillor Frank Hont, who chaired the panel, said it was all about balancing the needs of students, who, he said, generate £1 billion for the city economy, with that of local communities.

The report, which will be considered by the council’s cabinet next week, looked at the demand, supply and impact of student accommodation due to a growth in applications.

"It follows an increasing trend of some students shunning traditional shared houses and flats in residential areas in favour of living in purpose-built, good quality accommodation close to the city centre," said a council statement.

Some proposed developments, especially those earmarked for the city centre, have been fiercely criticised by the public over their quality and siting. Earlier this year, Liverpool estate agent City Residential said the supply of student accommodation was being created far quicker than student numbers were expected to rise.

However the review has concluded: "There is no need for a moratorium on new schemes because the growth is part of the natural development cycle and will eventually diminish. In addition, student numbers are likely to remain stable and some older accommodation is coming to the end of its life and will provide opportunities for redevelopment in terms of housing or commercial space." 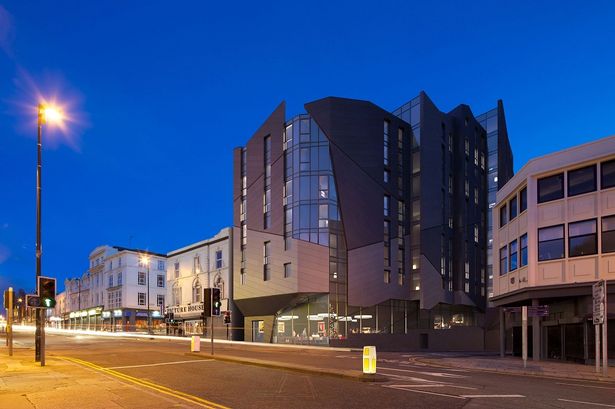 One of dozens of student developments in the city centre, this one on the site of the Odeon, London Road

The report makes a series of recommendations "to give the council a framework to influence future developments". They include:

i) Introducing "zones of opportunity" in the city centre to direct where future developments are located and discourage them in less appropriate areas.

ii) Using planning powers to make sure proposals for student accommodation have viable alternative uses in the event that demand falls.

iii)Setting up a range of measures to encourage good quality management of student accommodation, such as requiring a management plan with standards for refuse/waste and behaviour with any planning application, and encouraging a positive relationship between students and their local communities.

The report also recommends that the council has a clear strategy to manage the impact of the changing HMO (Houses of Multiple Occupation) market, for example in areas where fewer students now choose to live. This could include using planning powers to exercise greater control over the location and intensification of HMOs and using Landlord Licensing regulations to make sure they are good quality.

Councillor Hont, the cabinet member for housing, said: “Students make a £1 billion contribution to the city’s economy and in many cases they go on to make Liverpool their permanent home and bring up their families here. This is about balancing their needs with other members of the community.

“Although there has been an increase in applications for purpose built accommodation, all of the evidence we have is that there is still sufficient demand.

“What we are proposing is a series of practical and sensible recommendations that future proof student developments and ensure areas do not become too saturated with a type of accommodation that could become unsustainable and destabilise an entire community.

“I would like to thank all of the people who contributed to this report and helped influence it.”

The review group was made up of councillors and individuals with experience and knowledge of the student, university and developer communities.

The full Student Accommodation Review report can be read here: