What was once described as the most remarkable banking interior in the country will be developed into a restaurant in 2024. Property developer Kinrise and Martins Bank Building took to social media to invite interested operators to get in touch for an “opportunity to establish a presence on the hospitality world stage.”

Martins is such an important and imposing building that is so closely tied to Liverpool.

The Martins Bank corporation dates back to the mid-16th century but was acquired by the Bank of Liverpool in 1918, and then taken over by Barclays in 1969. It was a national powerhouse of its time – it had 560 branches in the late 1920s – and the Water Street building was its headquarters – making it the only national bank whose London office was a “branch”.

Opened in 1932, when Liverpool was one of the wealthiest cities in Europe, it was designed by Herbert J. Rowse who was also responsible for the India Buildings on the other side of Water Street, the Philharmonic Hall and the Queensway Tunnel. It has retained its original opulent fittings. Pevsner describes it as Rowse's "masterpiece... and among the very best interwar classical buildings in the country."

During World war II, the building's vault held a portion of the country's gold reserves as it was potentially more resilient from bombs. This was dramatised in the film The Bullion Boys. Barclays sold the huge Portland stone building to the Carroll Group in 1989, who then sold it on to Castlewood in 1996.

The bank’s doors have been closed since 2009 and, despite numerous projects and ideas, the building has remained empty except for a handful of events and film sets. In June, Martins Bank was used for the Taste Liverpool, Drink Bordeaux festival.

There were once rumours that the site would become a five-star hotel with sources indicating interest from the Waldorf Astoria. Recently acquired by Kinrise, the firm revealed plans earlier this year to turn the 210,000 sq ft building into a hybrid mix of work, social and restaurant space. Kinrise are working with architects Red Deer and Brock Carmichael and the plan is to reopen the building in 2024.

Sam Lawson Johnston, co-founder of Kinrise said; “Martins is such an important and imposing building that is so closely tied to Liverpool, its history, culture and community. We want the building’s renovation to be open and accessible once more so it can be enjoyed and experienced by everyone across the city.” 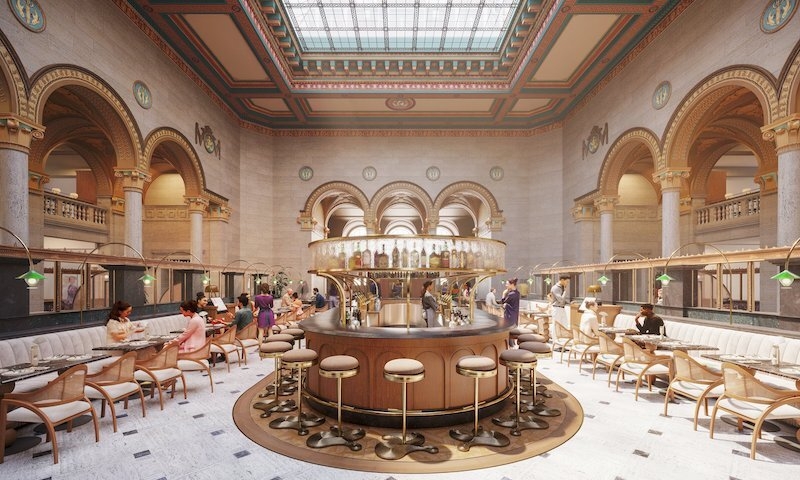 It’s more good news for Liverpool as the business district gets ready to welcome new openings Gaucho on Water Street and Hawksmoor to Brunswick Street. Could Liverpool finally get its own branch of The Ivy? Other names currently being thrown around the rumour mill include Dishoom who now own eight restaurants around the UK including London, Edinburgh, Manchester and Birmingham.

Which restaurant would you like to see takeover Martins Bank Building? Let us know in the comments…

Read next: Gaucho steakhouse gets green light for Water Street