SWISS psychologist Carl Gustav Jung's speciality was dreams, but even he could never have dreamed that there would be a bust of him in a city he had never visited. 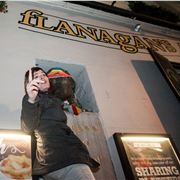 Nor that an obscure quote from a book he wrote in 1927 would one day be harnessed and found with casual ubiquity on everything from dentist's waiting rooms to Mersey marketing campaigns on London Underground.

He might also have considered it rather fanciful that almost 53 years after his death that self-same bust in his “Pool of Life” would be adorned with a pair of rainbow knickers on a cold February 23 night by a woman standing perilously on the shoulders of two men old enough to know better. Or that this woman, Daisy Campbell, would be hollered on by a raucous huddle of more than 50 people who had trooped through town after spending the previous three hours pondering the number 23 (a lot), synchronicity, magic, art and acid. 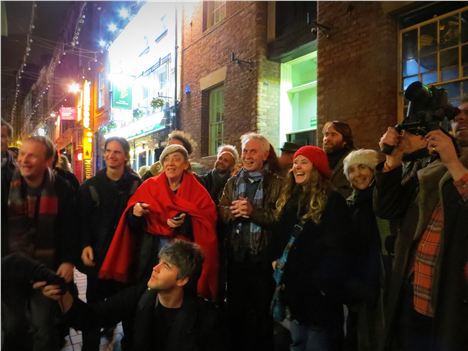 “It's like Liverpool used to be,” Paul Simpson, of The Wild Swans, had earlier observed as the director daughter of the late Ken Campbell undertook a performance lecture, Time To Pull The Cosmic Trigger, at the Kazimier. 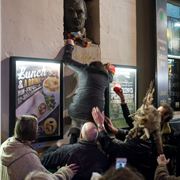 The whys and wherefores of that can be discovered here.  To reprise, the event was staged in a bid to garner support for a full-scale production of Cosmic Trigger, autobiography of Illuminatus! author Robert Anton Wilson, which will open in Liverpool on November 23. Venue and everything else TBC.

Among the capacity Kazimier crowd were pop artist Jamie Reid and director Chris Bernard, but al least half were too young to have any memory of the original Science Fiction Theatre of Liverpool, the root of all this.

There was a talk by KLF author John Higgs, an interview with illustrator/magician Alan Moore and a performance of "the most complicated" scene from Cosmic Trigger, acted out by several well known faces from the Impropriety stable of performers. 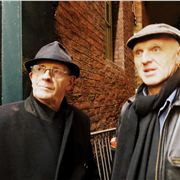 Peter Halligan and Chris BernardIn Mathew Street, meanwhile, the number 23 was determined to have its say. An LFC fan got caught up purely for wearing a Jamie Carragher shirt with the magic number; this at the same moment Confidential eavesdropped a woman yelling into her phone: “I can make my own decisions, I'm twenty-three years old!"

Luckily, at that point, a minibus arrived and the London/Brighton contingent vanished in a puff of smoke, back down to The Smoke, leaving CJ Jung bedecked in the vivid underwear and the Liverpool set partying like it was 1976.

And still only Sunday.

“Bloody students,” a passer-by outside Flanagan's was heard to mutter. 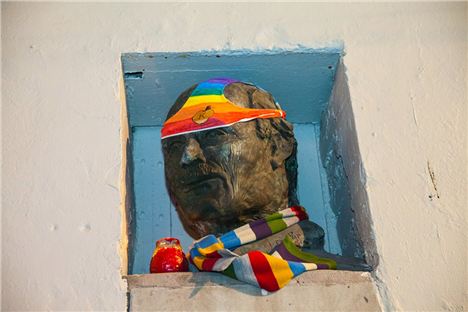