Liverpool Mountain - the new kid on the dock

Staff at Tate Liverpool call it ‘Windy Corner’. Liverpool dockers in days of old may have called it something rather fruitier. Either way, the cobbled square between the Tate’s gable-end and the adjacent Piermaster’s House at the Albert Dock seems to funnel the harsh Mersey gusts into the fiercest of blasts.

Officially called Mermaid’s Corner, this tight hurricane alley is now home to Liverpool’s newest piece of public art. At almost eleven metres tall, this apparently delicately balanced totem is, at first glance, not the most obvious choice for such a wind-battered location. But once you realise that its five teetering blocks add up to 110 tonnes of solid granite, it becomes clear that this unmissable city landmark isn’t going anywhere, whatever the weather.

"I really hope Liverpool’s going to love it. I think it will"

The sculpture is by the Swiss artist, Ugo Rondinone, and Liverpool Mountain is his first permanent work in the UK. The huge granite blocks are balanced one on top of the other, but instead of revealing the nuance and texture of natural rock, these lovely Liverpool lumps are covered in the kind of colours that make your eyes hurt. They could have been painted using the world’s biggest set of highlighter pens.

“During the 1960s and 70s, there was a movement called ‘land art’,” explains Rondinone. “The work was often camouflaged into the landscape, but I decided to do the contrary. That’s when I decided to use day-glo colours on a natural material – stone.”

The work is the fourth of Rondinone’s ‘mountains’ following previous projects in locations including the Nevada desert and Miami. This latter sculpture caused the artist a little trouble when the yellow paint faded prematurely, but unlike a DIY decorator, Rondinone couldn’t just take the tin back to B&Q.

“I’ve researched the paint and modified it, made it better,” he says. “But the Miami Mountain faces harsh conditions – with wind, as in Liverpool, but with the sun as well. I had to approach a chemist to analyse why the yellow faded after a year. It was a mistake I’d made, because I’d used white as an undercoat. In Liverpool, I didn’t repeat the mistake. So the colours will not fade, but they will need touch-ups – maybe after five years.”

Buying a few match pots to keep the sculpture in good nick must seem like the least of the logistical worries following a year of intense planning. As Sally Tallant, director of Liverpool Biennial, explains:

“The piece is nearly eleven metres high, but it goes seventeen metres down below ground. The edge of the dock walls isn’t all that solid – it’s more fragile than you might imagine – so to put 110 tonnes on it, you have to go down to something solid.

“We’ve worked together with the Royal Albert Dock, with Tate, with the engineers Arup, with Morgan Sindall who are a construction company. We’ve also worked with a quarry in Italy, and with Ugo’s studio in New York. We’ve had to go through a lot of really complicated engineering solutions to make sure we got it right.

“I now know a lot more about engineering, granite and cantilevering than I thought I ever would.”

“It’s a great way to celebrate,” he says. “And I hope Liverpool will continue to add more public sculpture, and lead the way as a European city showing how you can deal with art in public. Because it’s not a given that cities are investing money for art in public, it’s not a given at all. It’s amazing that Liverpool made this effort and embraces art in the way it does.”

It’s a sentiment with which Tallant agrees.

“I really hope Liverpool’s going to love it. I think it will. It’s fitting for the city. Ugo’s work makes you happy, and Liverpool is a very optimistic, hopeful place. It feels right to have something as optimistic as this. And it increases the visibility of the city.”

Even if she’s just talking about the sculpture’s colour, there’s no doubt that she’s right about that.

Ugo Rondinone’s Liverpool Mountain can be seen in the Mermaid Courtyard next to Tate Liverpool at the Royal Albert Dock. 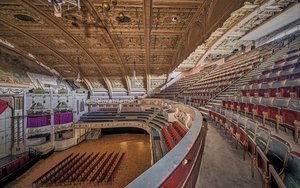 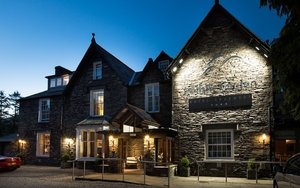 Deanna Thomas heads up to the lakes for a family-friendly, dog-friendly trip 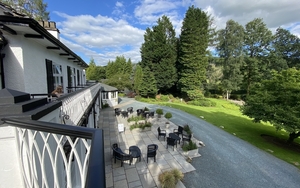 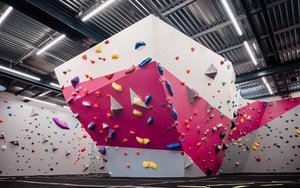