Liverpool is in deep water now

THERE was a time when the Liver Birds towering over Liverpool greeted the arrival of ships into the city.

Now a line of brightly coloured cranes stands like a guard of honour at the mouth of the Mersey.

Today what is one of the world’s most modern shipping terminals was officially opened by Secretary of State for International Trade Liam Fox.

It means Liverpool can now handle 95 percent of cargo vessels in the world - many of them mega vessels - and we can expect to see some of them sailing past Crosby’s Iron Men from now on.

That line of red cranes, built in Shanghai and shipped to the River Mersey on an 18,000 ocean journey, now dominates the entrance to the Port of Liverpool, not to mention the skyline for miles, in every direction.

Their apex is 92 meters, almost as tall as Big Ben. When their booms are raised they stretch to 130 meters.

The £400 million deep water facility by Peel Ports complements the existing Royal Seaforth Container Terminal. Each terminal has the capacity to handle around 1 million containers per annum.

It has been developed in response to changing trading patterns and shipping industry trends towards the use of ‘mega’ ocean-going container ships.

Captured: The gigantic cranes finishing their 18,000 mile journey from Shanghai to Liverpool a year ago

Liverpool is already Britain’s biggest transatlantic port, with a 45 percent market share and currently handles eight percent of the container market in Britain, but this is expected to rise to between15 percent and 20 percent.

The new expanded port facility will create an estimated 5,000 direct and indirect jobs.

It spans around 16 hectares reclaimed from the sea, with a new 854 meter long riverside quay wall. The site is large enough to accommodate the stadiums of all four major Liverpool and Manchester football clubs, should we wish to ship them.

Secretary of State Fox said: “Exporting is vital to the economic health of our nation. This investment at Liverpool will boost crucial cargo capacity, create local jobs and is yet another sign that the UK is open for business with the world.

“Liverpool is ideally located to increase our trade with countries west of the UK, including the US, Canada and South America, and this new port opens up even more opportunities with new markets and export destinations for UK businesses.” 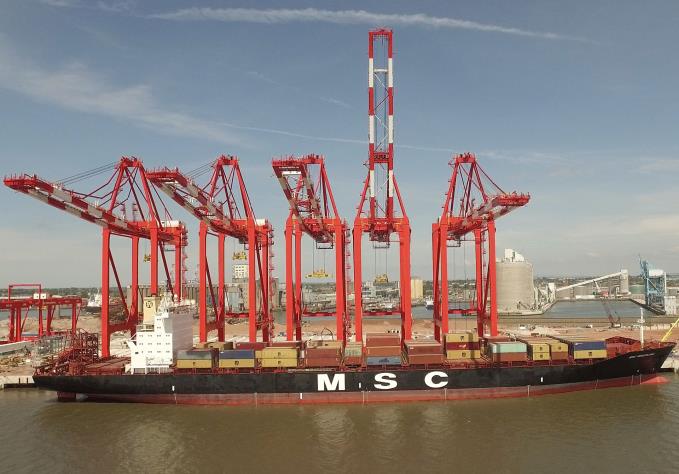 In their Liverpool home

Mark Whitworth, CEO of Peel Ports said: “This marks the beginning of a new era for the Port of Liverpool. Our investment will help global shippers to transport cargo more efficiently to their end destination with lower costs, congestion and carbon emissions.

“The new terminal creates a new trading gateway in Britain. We are already exploring and succeeding in creating new opportunities for British exporters, having recently signed a significant Memorandum of Understanding (MOU) to create a strategic alliance aimed at facilitating international trade and generating new business by promoting trade routes between Liverpool and the west coast of South America via the Panama Canal.”