Simon Rimmer's American dream is WAG-friendly and kid-friendly, but not so pocket-friendly, says Vicky Andrews

No wonder Simon Rimmer always looks so happy. The Wallasey-born boy done good has a string of thriving restaurants, best-selling books and a successful career as a TV presenter under his belt. The cheeky celebrity chef even claims to have invented pulled pork.

Liberty Tavern is the more upmarket and newer kid on the block to the adjacent Elephant Pub & Bakehouse in Woolton Village, both owned by Rimmer and both offering a fairly similar menu. But we’ll come back to that - and the piggy tale - a bit later.

How well does the American dream travel to Liverpool 25?

The blurb bellows like a true Trumpian; “A melting pot of recipes from colonial dining rooms of the 1890s, contemporary taverns and brasseries of the great metropolitan cities, BBQ pits of the deep south, crab-shacks, food trucks and diners the length and breadth of the USA.”

So, how well does the American dream travel to Liverpool 25? After convincing Google maps that we were not off across the pond for dinner at the Liberty Tavern, Arlington, Virginia, we navigated into the car park, chock-a-block with sparkling 4X4s that must have torn down Camp Hill via Route 66 and the village Sainsbury’s.

The restaurant is WAG-friendly and kid-friendly with a separate menu for ‘Little Eagles’, one of whom had furiously scribbled over the grown-ups’ drinks menu. We took their abstract art as a sign from the great and the good and ordered a dangerously boozy Reflective Negroni (£8.50) and a No-Tanical Gardens mocktail (£4.75), charging our glasses to a mini Jackson Pollack in the making.

The food menu here is a rough and ready cavalcade of carnivorous treats with very few veggie and vegan options. The separate gluten-free menu was certainly appreciated by my dinner date, but removing the sauces and carbs was just lazy. Do the management really think it’s okay to offer chicken liver parfait without bread? Should one eat it with a spoon or spread it on the table cloth?

In the end, my coeliac cereal killer could only be matched up with the starter of charred corn, blackbean and feta salad (£5.50). It was vibrant and well-seasoned, casually tossed with fresh avocado, tomatoes and a zingy lime chipotle dressing, but was always going to be a consolation prize in place of stodgy corn fritters or sticky chicken wings.

My cajun jumbo shrimps (£7.50) were devilish enough, a voluptuous, fleshy treat with a coy looking pineapple and chilli salsa, a very clever flavour combination of hot, sour, sweet and salty. Lubricated by a lively glass of South African Prime Cuts house white and a weighty Turno De Noche Malbec from Argentina, our engines were raring to go for the main event.

The belly pork ribs with fette sau rub (£18) arrived on a heavy wooden chopping board with a mess of ranch coleslaw, a metal beaker of fries and a separate jug of bbq sauce. As crowded as the New York subway at morning rush, there was no elbow room at the tiny table to really get stuck into any of it. The slaw was delicious but the chips were boring, the sauce too thin and the ribs on one side like pulling teeth. I pronged at the juicier end of the cut with limited success, finally conceding an unsatisfactory meat defeat to a dish half-eaten.

The 8oz rump with house fries (£20) must have missed the memo to dress up for the occasion, a solitary bunch of watercress carrying the torch for accompaniments. “It wasn’t the worst I’ve ever had, but it wasn’t the best either.” I knew what she meant - it tasted perfectly fine for a medium rare steak but certainly wasn’t flying the star spangled banner for the grill chef.

The gluten-free menu fell short again with desserts - even the ice cream was a no-go as it had been ‘manufactured externally’. I took one for the team and ordered the double chocolate brownie (£6), conveying with great enthusiasm the warm, gooey middle and crisp crust, topped with a drizzle of hot sauce and a scoop of malted milk ice cream. Pure choco heaven, it was the highlight of a decidedly mediocre meal that clocked in at two and a half hours and burst the 90 quid mark.

Let’s return for a moment to the menu of The Elephant, where the 8oz rump steak costs £2.50 less and comes with chunky chips, grilled mushroom, roasted tomato and herb butter. The buttermilk chicken burger - £14 in the Liberty Tavern - is £11.50 next door. The halloumi burger £13.50 or £11.

I’m all ears if you think the higher prices in the tavern are worth it, but next time I’m in Woolton I’ll be making a trunk call next door.

As for the pulled pork story, it’s a long running joke between the Sunday Brunch hosts. And I can’t help but think that Simon Rimmer is having the last laugh here too. 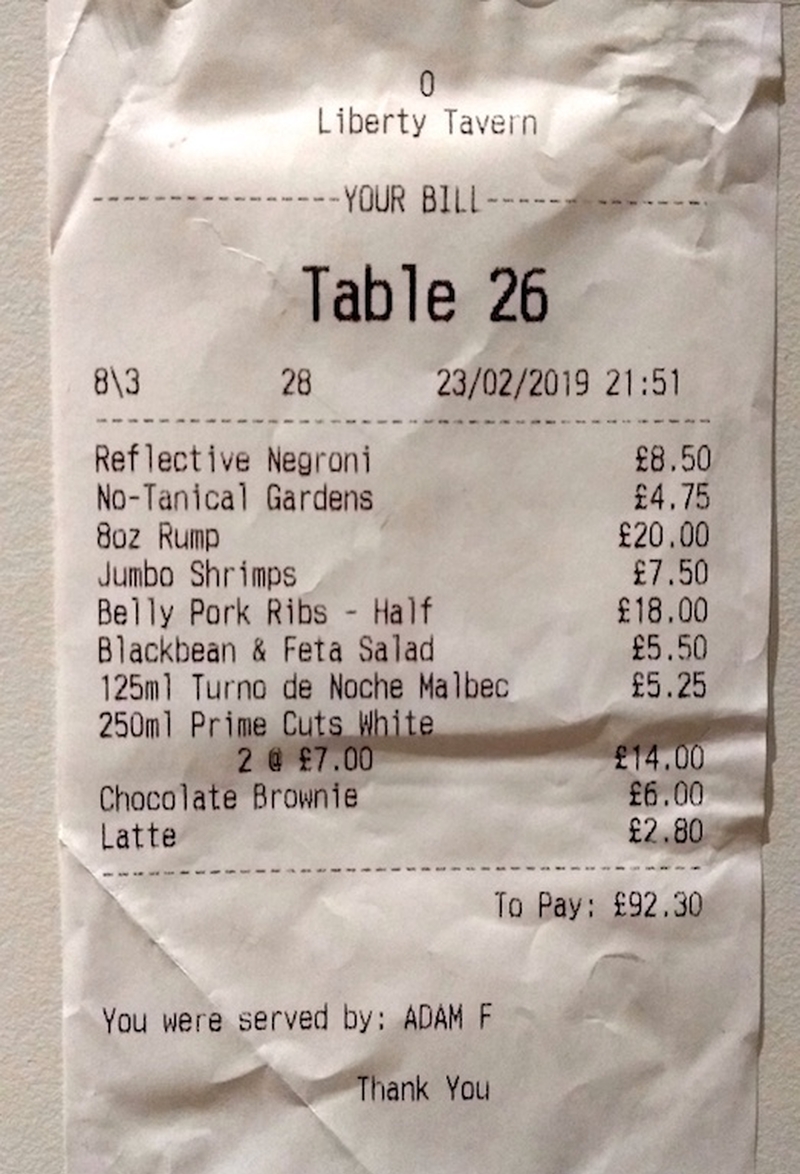